Liver transplant is the only treatment option for advanced liver disease. However, after liver trans-plant, acute complications (including primary dysfunction, hepatic artery thrombosis, portal vein thrombosis, hepatic venous obstruction, bile leak, and biliary stricture) or chronic complications (including chronic rejection, disease recurrence, and drug-induced complications) may occur.1-3 Post-transplant liver dysfunction can have various causes; evaluation of the causes, which can lead to diffuse parenchymal damage, including fibrosis, is of clinical importance.

Postoperative B-mode and Doppler ultrasono-graphy (US) are standard procedures for the assessment of graft complications. From US findings, clinical symptoms, and abnormal laboratory findings, a liver biopsy may be required.4 Although liver biopsy is the standard method for the assessment of morphologic liver changes and fibrosis, it is an invasive procedure that may cause complications.5

Transient elastography (TE) is currently the most widely used and endorsed method for the asses-sment of liver fibrosis in many conditions, such as chronic hepatitis B and C, nonalcoholic steatohepatitis, and nonalcoholic fatty liver disease, as well as in posttransplant patients.6 Insufficient performance in detecting mild fibrosis, failure to measure liver elasticity in patients with obesity, ascites, and narrow intercostal space, and inability to target liver parenchyma by direct visualization are problems that remain a considerable adversity of this tool.7,8 Acoustic radiation force impulse (ARFI; Siemens Medical Solutions, Erlangen, Germany) elastography is a new technology to measure liver stiffness and evaluate liver fibrosis. This technology is included in conventional ultrasonographic devices, and it can be performed during a conventional B-mode exami-nation with a single transducer. The principle of this method is based on the shearing of the examined tissue, which induces a smaller strain in hard tissues than in soft ones. The US probe produces an acustic pulse, which generates shear waves that propagate into the tissue. The propagation speed (measured in meters per second) increases with the stage of the fibrosis.6 It has been shown that ARFI is a reliable technique for diagnosing or excluding liver cirrhosis9-11 and shows similar predictive value for significant fibrosis and cirrhosis compared with TE.6 However, the standard cut off value of the ARFI technique is not yet well established in the clinical care of liver transplant patients.

The aim of this study was to evaluate the diagnostic efficiency of the ARFI technology for the assessment of fibrosis in patients who received orthotopic liver transplant (OLT).

We enrolled 28 OLT patients (deceased and living donors), whose biopsy decision was made clinically because of posttransplant dysfunction, for pro-spective evaluation of cause and severity of fibrosis. The ARFI elastographic measurements were applied before the biopsy or within 3 days after the biopsy, by 2 radiologists.

The local ethics committee approved the project, and written informed consent was obtained from all patients for the use of their data for research. For ARFI elastographic measurements, we used the Siemens Acuson S3000 ultrasonographic system with 6C1 transducer (Virtual Touch Tissue Quantification; Siemens Medical Solutions). For measurement, a quadratic cursor representing the anatomic region of interest to be measured is placed in the requested area of the liver parenchyma, and numerical values are obtained. Ten measurements in segments III to IV on the left lobe graft and segments VII to VIII on the right lobe graft could be obtained, avoiding large vessels or bile ducts. The measurements were performed about 2 to 3 cm in depth from the surface of the liver, with results expressed as meters per second.

Our study revealed a significant correlation between ARFI values and liver fibrosis in post-OLT patients. The ARFI values increased in parallel with fibrosis staging but were not accurate enough to differentiate between F0 and F1 or F2 fibrosis stages in accordance with the modified Ishak scoring system.

Noninvasive methods such as ARFI or TE have gained increased importance in the follow-up of patients after OLT. Both techniques provide accurate diagnosis of significant fibrosis and cirrhosis.7,15,16 Assessment of fibrosis can be examined quickly and noninvasively in this group of patients by TE. However, TE has many limitations in measurement. The performance of TE may be limited in patients with a high body mass index, ascites, or narrow intercostal space.15,17

Conventional US devices include ARFI; therefore, B mode information and the elastography measure-ment can be performed quickly using a single device, as in TE.11,18 The US-guided device makes it possible to identify the most appropriate place for the elastographic measurements, for instance avoiding nearby interfering structures, such as hepatic vessels and ascites.19 In nontransplant patients, regarding the accuracy of ARFI imaging in cirrhotic liver disease, several studies have reported that ARFI imaging provides good diagnostic performance and excellent accuracy, with ARFI values increasing in parallel with fibrosis stage.15,16,20 In their study, Sporea and associates16 reported that ARFI was well-correlated with liver fibrosis caused by viral hepatitis; however, ARFI was not accurate enough to differentiate between F1 versus F2 due to the small proportion of F0 and F1 patients (by METAVIR scoring). Crespo and associates18 indicated high accuracy only in advanced fibrosis stages (by Scheuer scoring) of liver fibrosis with ARFI imaging, in transplant and nontransplant patients with liver disease of various causes.

For fibrosis staging by ARFI elastography in post-OLT patients, only few experiences are published in the literature.5,18,21-23 Liao and associates21 reported a sensitivity ratio of 95.5% using a shear-wave velocity cutoff value of 1.058 m/s in the evaluation of posttransplant graft dysfunction in early fibrosis stages (≤ F1, by METAVIR scoring); which constituted a larger proportion of the study group (94.5%). The group indicated that there was a significant difference in F0 compared with F1. They also reported that ARFI measurements had a high specificity (92.9%) using a cutoff value of 1.8 m/s in the advanced fibrosis stages. However, Wildner and associates4 reported that the areas under the receiver operating characteristic curves for patients with advanced fibrosis (F3) and cirrhosis (F4) (by Batts-Ludwig scoring) were 92.9% and 80% and had discretely higher cutoff values (≥ F1, 1.48 m/s). Pinto and associates22 indicated a statistically significant difference in shear-wave velocities between the F0-F1 and F2-F4 groups (by Batts-Ludwig scoring), concluding that ARFI might serve as a potential method for assessing significant fibrosis in pediatric patients after liver transplant. Tomita and associates23 reported that the ARFI measurements were significantly higher for patients with F1 and F2 portal fibrosis versus patients with F0 portal fibrosis (by METAVIR scoring).

In the present study, we found mean ARFI values of 2.18 ± 0.35 m/s for patients with F3 fibrosis (by modified Ishak scoring), whereas the shear-wave velocities in patients with F0 fibrosis were significantly lower (1.4 ± 0.07 m/s). The cutoff values that were reported by Wildner and associates4 seem to be closer to our ARFI measurements. When the lower cutoff values were considered, which were determined by Liao and associates,21 there was only 1 patient under the threshold with F1 (by modified Ishak scoring) fibrosis in our patient group. However, with regard to this threshold, specificity decreases prominently (reported 25.7% in F1 stage fibrosis by METAVIR scoring).

There were some limitations in our study. The most important limitation was the small sample size due to the small number of patients with significant fibrosis and, in particular, none with cirrhosis.

In conclusion, ARFI imaging is a promising screening test for detecting significant liver fibrosis (≥ F2 in METAVIR and similar scoring systems, ≥ F3 in modified Ishak) in patients after living-donor or deceased-donor OLT. Although similar results have been published indicating the accuracy of ARFI in advanced fibrosis stages, for detection of early fibrosis stages, further multicentric prospective studies with larger series of patients are needed. These studies could help obtain clear cutoff ARFI values, which may help to confirm the effectiveness of this method in diagnosing liver fibrosis in post-OLT patients.

From the 1Department of Radiology, the 2Department of Pathology, and the 3Department of General Surgery, Baskent University School of Medicine, Ankara, Turkey
Acknowledgements: The authors have no sources of funding for this study and have no conflicts of interest to declare.
Corresponding author: Kemal Murat Haberal, Maresal Fevzi Cakmak Rd., 10 st., No/45 06490 Bahcelievler, Ankara, Turkey
Phone: +90 532 3726637
E-mail: kmhbjk@hotmail.com 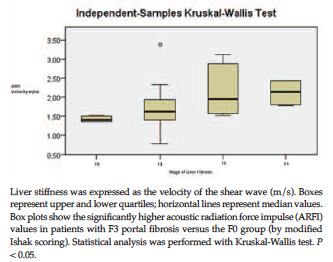