Objectives: Persistent hyperparathyroidism can have a deleterious effect on graft function in kidney transplant recipients, although serum calcium, phosphorus, and parathyroid hormone levels tend to normalize after successful transplant. Parathyroidectomy can result in sustained amelioration of persistent hyperpara-thyroidism despite graft failure risk and unfavorable graft outcomes. Data on this issue are limited and conflicting. Here, we evaluated the effects of parathyroidectomy on graft function in kidney transplant recipients.

Materials and Methods: This retrospective study included 249 adult kidney transplant recipients (121 deceased-donor/128 living-donor; 142 males/107 females; mean age of 39.3 ± 11.6 y; mean follow-up of 46.5 ± 23.5 mo). Participants were grouped as those without (n = 222), those with pretransplant (n = 12), and those with posttransplant (n = 15) parathyroidectomy. Graft outcomes and serum calcium, phosphorus, and parathyroid hormone levels were studied.

Conclusions: Parathyroidectomy resulted in sustained decreased levels of serum calcium and parathyroid hormone. We observed no graft failure risk associated with parathyroidectomy in our study. Parathyroid-ectomy before transplant is advantageous with better graft function.

Immunosuppressive therapy
All recipients received basiliximab and methyl-prednisolone for induction therapy. Maintenance treatment consisted of calcineurin inhibitors (tacrolimus and cyclosporine) or everolimus combined with mycophenolic acid or mycophenolate mofetil and corticosteroids. The distribution of immunosuppressive regimens was similar between the 3 groups (Table 1).

Statistical analyses
Statistical analyses were performed with SPSS software (SPSS: An IBM Company, version 23.0, IBM Corporation, Armonk, NY, USA). Shapiro-Wilks test was used to assess the normal distribution of variables. Categorical variables are presented as frequency with corresponding percentages. Continuous variables are presented as means and standard deviation or median (with minimum to maximum). Pearson chi-square or Fisher exact tests were used to test differences in proportion of the categorical variables. The Wilcoxon signed rank test was used for comparisons within groups. Comparisons between groups were made using Kruskal-Wallis test. We conducted 2 group comparisons using the Mann-Whitney test. To compare values before and after treatment, percent changes were computed. Pearson correlation was used to analyze the data. P < .05 was considered statistically significant.

We observed no significant differences in age, sex distribution, posttransplant follow-up time, and immunosuppressive regimens among the 3 groups. The percentage of transplants from living donors in the non-PTX group (55.4%) was significantly higher than in the new-PTX (20%) and old-PTX (16.7%) groups (P = .001). Time on dialysis was also significantly shorter in the non-PTX group (P < .001). In the 3 groups, there were no significant differences in biopsy-proven acute rejection, delayed graft function, chronic allograft nephropathy, cytomegalovirus infection, and BK nephropathy rates (Table 1).

During the study period, there were no significant differences regarding graft loss and patient mortality rates among the 3 groups (P > .05). Three recipients in the new-PTX group had graft loss due to chronic allograft nephropathy. One patient who had stage 4 chronic kidney disease before PTX returned to dialysis 1 month after PTX surgery; the others returned after 23 and 59 months. In the non-PTX group, 22 recipients lost their grafts because of chronic allograft nephropathy, 2 because of BK virus nephropathy, 1 for urologic reason, and 1 because of nonadherence to treatment. There were no reports of graft loss in the old-PTX group. In total, 1 patient (8.3%) in the old-PTX group died because of pneumonia and 7 patients (3.6%) in the non-PTX group died because of different causes (pneumonia in 5 and acute myocardial infarction in 2 patients). There were no significant differences regarding graft loss (P = .699) and mortality (P = .469) among the groups (Table 1).

Serum calcium, phosphorus, and PTH levels tend to normalize within about 1 year after transplant.11 Although PTH levels decline within 3 months after a successful kidney transplant, approximately 50% of recipients have risk of PHPT, and the severity of preexisting PHPT largely affects its persistence after kidney transplant.12,13 The incidence of recipients with abnormal PTH levels decreased from 38% at 6 months after transplant to 21.7% at 5-year follow-up, including those who had excellent graft function.14 In our study, we observed that serum calcium, phosphorus, and PTH levels were generally within normal ranges and ameliorated compared with pretransplant levels except for those in the new-PTX group. We also observed that prevalences of hypercalcemia (19%) and PHPT (53.3%) 12 months after transplant were in accordance with the literature. Furthermore, PHPT and hypercalcemia may be associated with important complications, including bone loss, fractures, vascular calcification, graft dysfunction, and graft loss.15-17 Longer dialysis duration (> 6 y), higher CaxP products [>55 (mg/dL)2], and cinacalcet use before transplant are independent risk factors for PHPT in recipients.18 High pretransplant PTH levels have a significant and nonquadratic exponential influence on the risk of graft failure censored for death. At a PTH level of 7 pmol/L, graft failure risk is 1; however, at a level of 90 pmol/L, the risk for graft failure doubles.19 Compatible with the previous findings, in our cohort, renal replacement duration and high pretransplant PTH and calcium levels were positively correlated with PTH and calcium at first year posttransplant.

Parathyroidectomy and cinacalcet after transplant are treatment options for PHPT. In addition to the deleterious effects of hypercalcemia and PHPT on graft function, there are concerns about graft outcomes associated with PTX and cinacalcet use (Table 4). Although PTX and cinacalcet therapy can ameliorate PTH levels, graft function may worsen due to hemodynamic changes mediated by decreased PTH. Experimental studies have shown vasodilatory effects of PTH on preglomerular renal vasculature. After parathyroidectomy, decreases in PTH levels may contribute to decreased eGFR because of the lost vasodilatory effects of PTH.20,21 Some studies have shown that parathyroidectomy is associated with reduced graft function and survival in recipients.6,7,22 According to hemodynamic changes, serum creatinine levels tend to increase in the early PTX period.4,8,23 In the long term, serum creatinine levels showed no significant detrimental effects on graft function.23-25 In our study, serum creatinine levels in new-PTX group did not significantly change after PTX. Graft loss occurred in 3 recipients in whom we did not consider that it was associated with parathyroidectomy. Although serum calcium and PTH levels were similar between all groups at last visit, revealing a sustained amelioration with these parameters, it was remarkable that eGFR levels were significantly better in the old-PTX group.

We found that eGFR levels showed better graft function in the old-PTX group compared with the new-PTX and non-PTX groups. Low eGFR levels in the non-PTX group were also an engrossing finding. Serum calcium levels were within normal ranges, but there were markedly higher values at the maximum side of the range. Unrecognized and untreated persistent hypercalcemia could lead to graft deterioration. However, the amelioration of hyper-parathyroidism before transplant may preserve possible posttransplant hypercalcemia and provide better graft function. In addition, the high levels of PTH in the non-PTX group were controversial, whether it was the cause or the consequence of decreased eGFR. Decreased median PTH levels in the non-PTX group posttransplant from 374 to 154 pg/mL indicated that high PTH levels are independent of decreased eGFR. We considered that unrecognized hypercalcemia after transplant and disregard of hyperparathyroidism treatment while on the wait list were possible reasons for worse graft outcomes of non-PTX recipients. Furthermore, events affecting graft outcomes, including acute rejection, delayed graft function, chronic allograft nephropathy, cytomegalovirus disease, and BK nephropathy, were evaluated, and their ratios were similar among the groups.

There are several limitations of our study. First, it is a retrospective study. Because a bone mineral disorder has dynamic status and heterogeneity among patients, bone biopsy is a criterion standard procedure to uncover precise bone status. We did not perform bone biopsy; therefore, we could not detect the exact causes of hypercalcemia like adynamic bone disease. Furthermore, the distribution of participant numbers was unbalanced among the groups, which may have negatively affected the statistical results.

In conclusion, PHPT remains important in recipients and has an unanswered and controversial management approach. Although hypercalcemia and hyperparathyroidism can resolve with parathy-roidectomy after transplant, parathyroidectomy before transplant is associated with better graft function. According to our findings, to obtain appropriate treatment options for PHPT, candidates should be evaluated before transplant and PTX should be performed in appropriate patients. 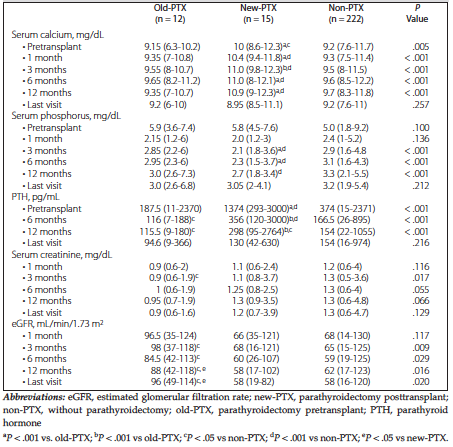 Table 2. Changes in Laboratory Parameters in the Groups 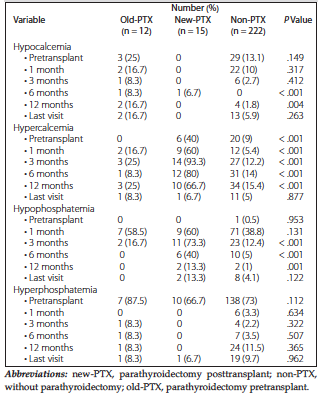 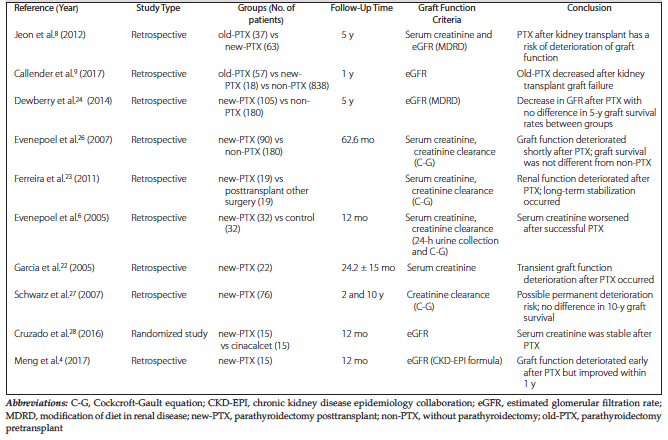 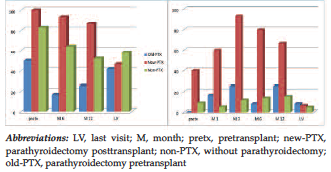 Figure 1. Prevalence of Hyperparathyroidism and Hypercalcemia in Groups