Materials and Methods: Human leukocyte antigen-G genotyping was assessed in 102 Iranian pancreas transplant recipients (including 41 with acute rejection and 61 with nonacute rejection). Results were compared with 100 individuals in a normal control group.

Results: No significant differences in genotype frequencies of human leukocyte antigen-G 14-bp insertion/deletion were observed in recipients who had acute rejection episodes. On the other hand, the insertion/insertion genotype was a risk factor for susceptibility to type 1 diabetes mellitus (odds ratio = 3.82, 95% confidence interval, 1.37- 11.22; P = .005).

Conclusions: Our results provided evidence revealing that the human leukocyte antigen-G insertion/insertion genotype might be involved in the pathogenesis of type 1 diabetes mellitus.

Human leukocyte antigen-G (HLA-G) is considered to be involved in down-regulation of the immune response to avoid allograft rejection in organ transplant patients or protects the fetus as a semi-allograft from rejection by the mother’s immune system.1,2 Expression of HLA-G may lead to a decrease in immune response against the allograft, consequently reducing allograft rejection. Human leukocyte antigen-G impairs the cytotoxic activity of natural killer (NK) and CD8 T cells and the maturity of dendritic cells (DC).3,4 Expression of HLA-G correlates with improved kidney,5 heart,6 liver, and lung3 allograft acceptance as well as improved acceptance of combined liver-kidney and kidney-pancreas transplant.7 Heart transplant patients with expression of HLA-G in myocardial cells and plasma have been shown to experience fewer acute rejection episodes, as well as no chronic allograft rejection, compared with HLA-G-negative patients.6 In kidney transplant patients, expression of HLA-G was associated with low-level production of alloantibody, immune tolerance, and better graft acceptance. Alloantibodies have an important role in pathogenesis of both acute and chronic rejection in recipients.5

The effect of HLA-G to increase allograft survival has been shown in in vivo and in vitro studies. In vivo immunization of HLA-G improves graft survival. In addition, interaction of tetrameric com-plexes of HLA-G with paired immunoglobulin-like inhibitory receptor (the receptor of HLA-G in mice) impairs murine DC maturation. Indeed, suppression of T cells resulted in better graft survival when HLA-G tetramer-coated beads were injected into mice before skin transplant.8

During pregnancy, the trophoblast cells produce HLA-G to restrict the immune response against semi-allogeneic fetal tissues. Human leukocyte antigen-G stimulates CD4+ T cells to produce interleukin 4 (IL-4), which has a protective effect on pregnancy outcome.2,9 In addition, HLA-G impairs B- and T-cell proliferation and cytotoxic activity of NK cells and also inhibits NK-mediated lysis.10 Indeed, HLA-G is associated with maternal-fetal immunotolerance through its immunoregulatory roles by interaction with various immune cells.11

Moreover, HLA-G is correlated with autoimmune diseases such as type 1 diabetes mellitus (DMT1) in which the destruction of pancreatic β cells occurs during immune response by activated T cells.12,13 A high level of soluble HLA-G molecules was also observed in individuals with impaired glucose metabolism.1

The role of HLA-G was also emphasized in control of other autoimmune and inflammatory diseases such as Crohn’s disease, pemphigus, celiac disease, systemic lupus erythematosus (SLE), rheumatoid arthritis, juvenile idiopathic arthritis, and asthma.2

Human leukocyte antigen-G is a nonclassical HLA class I that contains 8 exons and 7 introns and is located on the short arm of chromosome 6 (6p21.2-21.3).14,15 Alternative splicing of the primary transcript of HLA-G leads to formation of 7 isoforms, including 4 membrane-bound isoforms (HLA-G1 to HLA-G4) and 3 soluble isoforms (HLA-G5 to HLA-G7), both of which can be involved in the allogeneic response.16,17 Several polymorphisms in the 5´ upstream regulatory region and the 3´ untranslated regions (3´-UTR) regulate HLA-G production at the level of transcription and posttranscription.16 The HLA-G 14-bp insertion/deletion polymorphism in 3´ UTR can affect mRNA stability.18 Presence of 14 bp (5´-ATTTGTTCATGCCT-3´) in the 3´-UTR promotes alternative splicing that results in 92-bp deletion of exon 8 in mature HLA-G mRNA; consequently, a more stable transcript is generated.19,20 In addition, the presence of the 14-bp fragment is related to production of low expression levels of HLA-G mRNA.3 Human leukocyte antigen-G has been shown to be expressed in different conditions in various cells such as the pancreas, intestine, thymic epithelium, and peripheral blood monocyte cells.16

To the best of our knowledge, this is the first study investigating the possible association of the genetic polymorphism of HLA-G 14-bp insertion/deletion in acute rejection in pancreas transplant recipients. Because all transplant patients had DMT1 as the underlying disease of pancreas transplant, the risk of HLA-G 14-bp insertion/deletion in DMT1 was also assessed (for the first time) in Iranian DMT1 patients.

Patients and controls
Data were collected on 102 pancreas transplant recipients admitted to Namazi Hospital (affiliated with Shiraz University of Medical Sciences, Shiraz, Iran) from April 2006 to June 2014. The ethics committee of Shiraz University of Medical Sciences approved all protocols in accordance with the ethical guidelines of the 1975 Helsinki Declaration. Informed consent was provided by all participants.

Pancreas transplant recipients were followed for 6 months after transplant to monitor and record any episodes of acute rejection during this period. The diagnosis of rejection was based on paraclinical findings, manifested as an increase in serum amylase and lipase levels, and further confirmed by tissue biopsies based on Banff criteria.21 Our control group comprised 100 healthy volunteers from the Iranian Blood Transfusion Organization in Shiraz, Iran.

Statistical analyses
Allele differences and genotype frequencies between patients and the healthy control group and between the AR and NAR groups were analyzed by 2-tailed Fisher exact test, using SPSS version 22 (SPSS: An IBM Company, IBM Corporation, Armonk, NY, USA). Odds ratio (OR) and 95% confidence intervals (95% CI) were calculated to determine the magnitude of the effect. Furthermore, differences shown with regard to age, sex, and blood group type of patients were calculated with t test and Fisher exact test. P < .05 was considered statistically significant.

The effect of HLA-G on alloimmune response modulation was confirmed by the interaction of HLA-G with specific receptors such as the killer immunoglobulin-like receptor KIR2DL4/CD158d and the leukocyte immunoglobulin-like receptors LILRB1/IL-2/CD85j and LILRB2/IL-4/CD85d. Although KIR2DL4 is only presented on NK cells, IL-2 and IL-4 are expressed by various cells: IL-2 is expressed by monocytes, NK cells, DCs, and T and B cells, and IL-4 is expressed by myeloid cells such as DCs, monocytes, neutrophils, and macrophages. The presence of HLA-G receptors on a variety of cells induces different immune functions. It has been demonstrated that HLA-G leads to impairment in DC maturation and in CD8 cell and NK cell cytotoxic activity and inhibits CD4+ T-cell alloproliferation.3,22 Interaction of HLA-G with IL-2/IL-4 expressed by T cells and antigen-presenting cells induces dif-ferentiation of T cells into suppressor cells (CD3+CD4low and CD3+CD8low), which are related to the immune tolerance and consequently graft acceptance. In fact, it was demonstrated that expression of HLA-G leads to down-regulation of CD8 and CD4 expression at both the transcription and posttranslation levels of T cells. In addition, HLA-G mediates the down-regulation of CD4 and CD8 production, which can lead to increased plasma levels of soluble CD4 and CD8 molecules in liver and combined liver-kidney transplant patients. Soluble CD4 and CD8 co-receptors are defined as potent inhibitors of T-cell activation compared with membrane-anchored co-receptors. The presence of CD3+CD4low and CD3+CD8low T cells has been shown to increase the production of IL-4, IL-10, and IL-13 and to decrease the production of interferon-γ levels through the increased representation of CD45RA cells. Associations among HLA-G, IL-10, and CD3+CD4low and CD3+CD8low suppressor T cells have also been confirmed. Therefore, HLA-G is associated with immunologic markers included in immunotolerance.23

Regarding HLA-G in the pancreas, it was confirmed that pancreatic endocrine cells have low expression levels of HLA-G.37 Unusual recycling of HLA-G from the Golgi to the endoplasmic reticulum leads to prolonged lifespan of intracellular HLA-G compared with other HLA molecules and prepares the interaction of HLA-G with multiple low-affinity peptides, defined as autoantigens; therefore, it is possible that HLA-G may contribute to lack of presence of self-antigens on the cell surface and islet immunologic ignorance. On the other hand, HLA-G has been detected in the secretory granules, which are composed of many autoantigens. During insulin secretion, HLA-G could be increased on the cell surface through exocytosis. Because T-cell activation relies on the density of the autoantigen/HLA complex on the cell surface, it was suggested that local clustering of HLA-G during exocytosis may prevent deleterious T-cell activation.33,37

This is the first study to assess the correlation between HLA-G 14-bp insertion/deletion polymorphism and acute pancreas rejection and DMT1 in an Iranian population. The HLA-G 14-bp insertion/deletion polymorphism did not show an association with acute rejection, but the homozygote genotype of HLA-G 14-bp (insertion/insertion) was shown to be a risk factor for DMT1. Rejection is a complex process caused by interactions between both cellular and humeral axes of the immune system. However, further studies on the exact role of HLA-G genetic variations in DMT1 development are required. Furthermore, design of future HLA-G-based therapies, such as up-regulators of HLA-G expression, may induce a tolerogenic environment that is useful in management protocols of solid-organ transplant or DMT1. 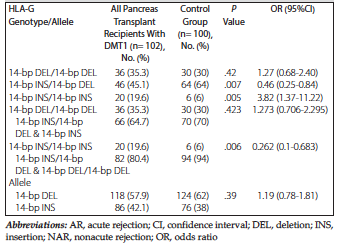 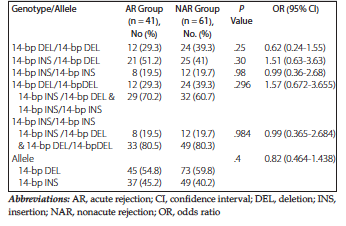