Materials and Methods: We conducted an analysis of BK polyomavirus screening methods at 2 different centers and compared their clinical outcomes and efficiency of testing.

Results: We analyzed 209 patients with BK polyomavirus reactivation after kidney transplant at 2 different institutions from 2008 to 2018. BK polyomavirus reactivation in blood was detected earlier if the patient was screened by urine screening protocol. However, measurable clinical outcomes were similar in all groups with different screening methods.

Conclusions: Although screening for BK polyomavirus in urine did detect viral reactivation earlier, there were no differences in graft or clinical outcomes when either the urine or blood screening method was used.

BK polyomavirus (BKV) causes BKV-associated nephropathy in renal transplant patients, which can lead to allograft loss.1,2 Primary infection most likely occurs via a urine, oral, or respiratory route in the first decade of life, with worldwide seroprevalence of up to 90% in adults.1,3-5 Virus latency is established in the renal epithelial and urothelial cells.6-8 BK polyomavirus is shed in the urine of 5% to 27% of immunocompetent individuals without associated clinical disease.7,9 In the immunosuppressed renal transplant recipient (RTR), however, viral reacti­vation can occur and can cause active shedding of BKV in the urine that could progress to viremia and ultimately to BKV-associated nephropathy, typified by tubulitis, interstitial inflammation, progressive fibrosis, and allograft dysfunction.6,10,11 BK polyo­mavirus viruria, viremia, and nephropathy are estimated to have incidences of approximately 20% to 60%, 13%, and 8%, respectively, among RTRs.3,6,12,13 BK polyomavirus-associated nephropathy is associated with significant morbidity, causing graft loss in as many as 50% of affected RTRs.7

Because no effective antiviral treatment is currently available for BKV, incremental reduction of immunosuppression remains the mainstay of therapeutic interventions for BKV viremia and nephropathy.1,7,10,14-16 Although simulation models have suggested that screening for BKV viremia to direct careful immunosuppression reduction could have benefits on clinical outcomes and financial costs,17,18 randomized controlled trials of screening protocols and the efficacy of their testing methods are lacking.

Screening for BKV in either blood or urine specimens is routinely performed at most transplant centers. Although the quantification of BKV DNA in blood or urine specimens is critical in guiding therapeutic intervention, variable screening protocols present significant challenges to actionable com­parisons of outcomes across centers.1 Therefore, opti­mizing screening protocols for the early identification of clinically meaningful virus reactivation with a minimal collateral risk of over-testing remains of great clinical interest.

In this study, our objective was to evaluate and compare both the efficacy and efficiency of screening for BKV reactivation in RTRs by means of either urine or blood specimen DNA quantifications.

Patients
This study was approved by the Beth Israel Deaconess Medical Center (BIDMC) Institutional Review Board, as well as the Partners Institutional Review Board. We reviewed 11 years (2008-2018) and 13 years (2003-2015) of renal transplant medical records from BIDMC and Massachusetts General Hospital (MGH), respectively. Retrospective demographic, clinical, and laboratory data were collected on all RTRs who developed BKV viremia. An additional analysis of a subset of RTRs screened for BKV by urine testing at BIDMC between 2014 and 2018 was also performed to examine any differences between patients who did and did not progress to BKV viremia after detection of BKV in urine (BKV viruria).

Screening cohorts for renal transplant recipients who developed BK polyomavirus viremia
From 2008 to 2011, screening for BKV in RTRs at BIDMC was performed by DNA quantification of blood specimens. From 2011 to 2018, the BIDMC protocol was adapted to screening by DNA quantification of urine specimens with follow-up of blood testing for patients with consistently positive urine screen tests.

From 2003 to 2015, screening for BKV in RTRs at MGH was performed by blood DNA quantification exclusively. Data before 2008 were not included for BIDMC because standardized BKV screening protocols were not rigorously enforced within the institution, and practices varied significantly on a clinical basis.

Clinical data for RTRs screened according to these 3 distinct protocols were evaluated as separate study cohorts to compare blood versus urine screening both within and across transplant centers.

Age of RTR and donor, sex of RTR, donor status (living vs deceased), and history of prior transplants were comparable among the BKV viremia cohorts (Table 1). However, race/ethnicity (P = .001) and use of rabbit antithymocyte globulin (rATG) for induction immunosuppression (P = .002) were significantly different between all 3 cohorts (Table 1). Specifically, the MGH blood cohort had a larger Hispanic population and used more rATG for induction therapy. In all study cohorts, a small number of patients not receiving rATG were given basiliximab for induction immunosuppression.

Demographic and clinical features: BK polyomavirus viruria cohort
Forty-five cases of documented BKV viruria were found by urine screening of RTRs at BIDMC between 2014 and 2018. Among them, 17 RTRs subsequently progressed to BKV viremia (viruria progression cohort), whereas 28 RTRs had BKV detected in the urine only (viruria nonprogression cohort).

Both of these viruria cohorts were similar in age, donor age, sex, sex mismatch, donor status (living vs deceased), induction therapy, and history of prior transplants (Table 2). Race/ethnicity of RTRs (P = .049) was the only variable found to be significantly different between study cohorts, with a larger Hispanic population in the viruria nonprogression cohort (Table 2).

Clinical outcomes of BK polyomavirus viremia cohorts
BK viral detection
BK viremia was detected significantly earlier when screening was done by urine (P = .004), with a median detection of 98 days after transplant compared with 195 and 189 days after transplant in the BIDMC blood and MGH blood cohorts, respectively (Table 3). The BK viral load peaked at a median of 18 days after first detection in BIDMC urine cohort compared with that shown in both blood screening groups, where median detection of peak viral loads occurred on the first screening tests (P = 0.079) (Table 3 and Figure 1). The number and frequency of BKV screening tests performed before onset of viremia were significantly different among the 3 cohorts. The median number of screening tests performed before the detection of BKV was significantly higher (P < .001) with urine screening (3 tests) than with blood screening at BIDMC (2.5 tests) and MGH (1 test) (Table 3). Moreover, the frequency of these tests before BKV viremia was significantly higher (P < .001) for the urine screening cohort (0.78 tests/mo) than for the BIDMC blood (0.28 tests/mo) and MGH blood (0.16 tests/mo) cohorts (Table 3).

Clinical results
We observed no significant differences in peak plasma BK viral load among all 3 groups. The BIDMC groups showed no differences in duration of viremia. Renal function, as represented by serum creatinine level, at detection of BKV viremia and at 1-year posttransplant was also not significantly different between cohorts. Total incidences of biopsy-proven BKV nephropathy and overall graft failures were not significantly different between all 3 cohorts (Table 3).

Testing characteristics
Data on follow-up testing after diagnosis of BKV viremia were available for BIDMC patients only. We found that median frequency of follow-up testing had significantly increased (P = .019) during the urine screening era (0.75 tests/mo) compared with the blood screening era (0.38 tests/mo) (Table 3). This difference appeared to be attributable to a significant increase in the median number of follow-up urine tests (P ≤ .001) versus an increased follow-up of blood testing (Table 3).

Clinical outcomes
No significant differences were found in median serum creatinine values at 1 year posttransplant, rates of BKV nephropathy, and rates of overall graft survival (Table 2). Although there were 3 biopsy-proven cases of BK nephropathy in the viruria progression cohort, the viruria nonpro­gression cohort had 2 graft failures due to acute tubular necrosis from cyclosporine overdose and chronic antibody-mediated rejection with transplant glomerulopathy (Figure 2).

Screening practices for BKV reactivation after renal transplant vary between transplant institutions and within institution during different time periods. The objective of our study was to examine whether screening for BKV by DNA quantification of urine or blood specimens impacts the ability to detect and control virus reactivation and whether these different practices ultimately contribute to rates of BK nephropathy and graft failure. We collected data both within and between different transplant centers to compare these screening methods.

The urine screening protocol was associated with increased frequency and number of tests before detection of BKV viremia, and this was accompanied by a decrease in the number of days from transplant to viremia diagnosis. Despite the more frequent monitoring and the earlier detection of BKV viremia associated with urine screening, the studied measures of viremia control and graft outcomes were not different between cohorts. There were no significant differences in peak plasma viral load, serum creatinine at 1 year posttransplant, BKV nephropathy, and overall graft failure. Collectively, these results suggest that the increased time and cost of more intensive monitoring of RTRs by urine screening may not have a significant effect on clinical course and graft outcomes, even if it provides earlier detection of BK virus reactivation.

Interestingly, not all RTRs who develop BK viruria will progress to viremia. We aimed to investigate whether any intrinsic demographic differences could be identified that might serve to risk stratify those with progression based on data collected at BIDMC during the urine screening era. Aside from race/ethnicity of RTRs, no differentiating demographic features were found between the nonprogression and progression viruria cohorts. These study cohorts were screened by the same protocol and therefore, as expected, did not vary in the number or frequency of screenings before viruria diagnosis. However, time to detection of BK viruria was significantly shorter for the group that ultimately progressed to viremic status, potentially indicating more aggressive disease. This may indicate either de novo infection with a different strain of BKV or that this group of patients experienced more immune suppression early on. Although there were no differences in the evaluated measures of graft function and outcome between the viruric cohorts, the shortened time to development of viruria may allow physicians to risk stratify viruric RTRs who are at increased risk for viremia.

This retrospective study has several notable limitations. First, small cohort sizes and the retro­spective nature of the analysis limited the power of our statistical analyses. The fact that study cohorts do not exist simultaneously in time is also an important confounding variable, as overall understanding of BKV and management of immuno­suppression in RTRs progressed during the years investigated. Furthermore, management of BKV viruria and viremia varied within and among centers in our study. With detection of viruria, some clinicians followed-up with increased monitoring frequency and others targeted immunosuppression toward the lower end of the usual range for the time posttransplant.

Our study analyzed detailed BKV screening practices for RTRs within and between 2 institutions. Although the use of urine screening may increase the number of screening tests performed per patient, detection of BKV in urine early after transplant is associated with progression to viremia. Thus, urine screening performed in the early posttransplant period may be effective for early detection of BKV reactivation, which could allow lowering of immunosuppression and affect graft outcomes in a larger study group. 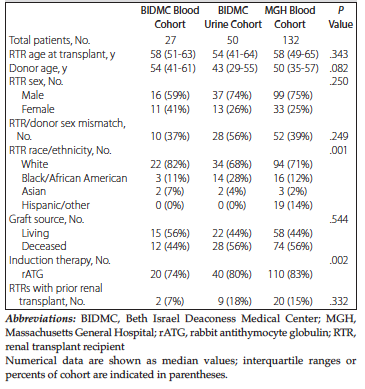 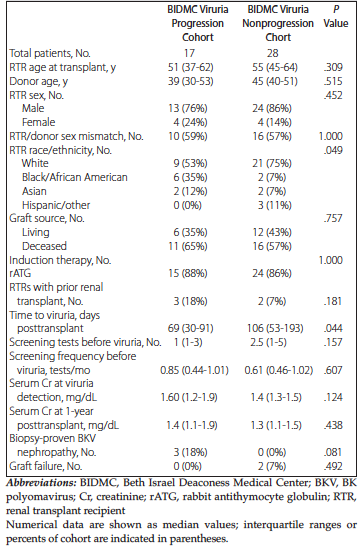 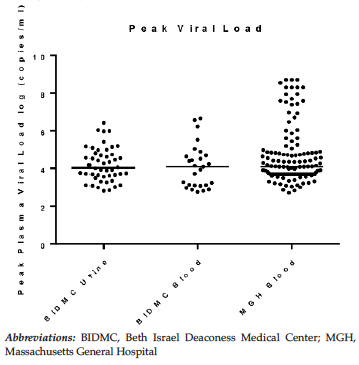 Figure 1. Peak BK Viral Load Had a Large Range in Each of the Study Groups (Not Significantly Different) 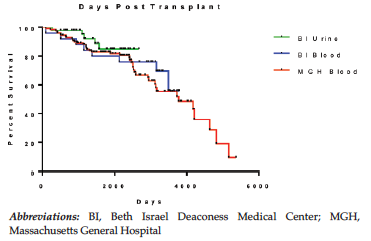 Figure 2. Graft Survival Was Better in Group Screened by Urine (Not Significantly Different)