Donor scarcity has remained a primary problem in transplant programs, especially during the COVID-19 pandemic.1,2 Because the number of patients on wait lists has increased each year, new concepts are urgently needed to expand the donor pool. The extended criteria donor approach is one solution to decrease the gap between organ demand and supply. Steatosis livers, prolonged ischemia time, elderly donors, and donors with history of cardiac arrest are considered as extended criteria or marginal liver graft donations. Traumatized livers from deceased donors after blunt injury are also considered to be in this group.

The use of marginal or potential donors can help to preserve more efficiently the donor pool; however, this has imposed a higher risk of posttransplant complications, such as primary nonfunction (PNF), delayed graft function, and initial poor function (IPF) in recipients.

The careful selection of an appropriate recipient for a marginal graft is needed to deter the possibility of inferior graft function. Part of the solution could be the acceptance of the use of traumatized livers; however, the use of grafts from donors with obvious traumatic abdominal organ injury is not universally accepted. There are limited reports on the use and outcomes of transplanted deceased donor livers with preexisting traumatic injury either known before or discovered at the time of procurement.3-12

Donor management
The donor was a 43-year-old woman found on the ground near her bicycle following a sudden heart attack due to Takotsubo cardiomyopathy. The patient regained systemic circulation after cardiopulmonary resuscitation by assisted chest compression (Cardiopulmonary Assist Systema of the University of Lund).

After she was hemodynamically stabilized, a total body computed tomography (CT) scan was performed. The CT scan excluded cerebrovascular events but showed a severe abdominal bleeding due to major liver trauma after mechanical cardiopul­monary resuscitation.

An immediate laparotomy was performed, which revealed a grade II liver hematoma in the right liver and a grade IV liver laceration near the falciform ligament, according to the Moore classification system.13

After a hypotensive episode (blood pressure 60/40 mm Hg, heart rate of 140 beats/min) and leakage of blood material from the aspiration dressing (Barker type), the patient again underwent surgery with optimization of hemostasis and revision of hepatic packing.

Postoperatively, her neurologic condition continued to deteriorate; subsequently, the patient was declared brain dead 1 day after surgery, and her family consented to organ donation. The donor’s mean arterial blood pressure was supported with high doses of norepinephrine. Liver function tests before procurement time showed albumin at 3.0 g/dL, aspartate aminotransferase level of 272 IU/L, alanine aminotransferase level of 252 IU/L, total bilirubin of 0.32 mg/dL, and prothrombin time (international nationalized ratio) of 1.72. The donor did not have fever or any signs of active infection.

Multiorgan procurement was performed on day 2 from the admission. During depacking, 10 pieces of laparotomy pad were carefully removed, and peritoneal fluid was sent for microbial culture analysis. No signs of bleeding were observed. A massive subcapsular hematoma of the right liver was drained. There was a 7-cm nonactive bleeding lacerated wound immediately overlying the falciform ligament that had been previously sutured with multiple stitches.

To stop oozing, the argon beam coagulator was used and 2 Tachosil fleeces were applied. After cross-clamping and cold perfusion, the liver blanched homogeneously. The liver and both kidneys were subsequently procured from the donor. The liver appeared well perfused, soft, and without signs of congestion. Liver biopsy revealed no steatosis (Figure 2).

During the back-table procedure, the hepatic artery and veins, as well as the portal vein, were selectively flushed with preservation solution to rule out vascular injuries. Exploration of the procured liver showed no vascular or bile duct lesions but did show some parenchymal discolorations because of perfusion defects in lacerated regions.

Transplant to recipient and outcomes
The liver recipient was a 47-year-old man with hepatocellular carcinoma and hepatitis C-related cirrhosis. He was selected according to the philosophy of the “the sickest first”: this patient indeed had a higher Model for End-Stage Liver Disease (MELD) score (17 points) compared with the other candidates of the same blood group on the wait list.

All published cases on LTx with traumatized lacerated livers (n = 43) were analyzed (Table 1). The median ages of donors and recipients were 22.3 years (range, 16-43 years) and 46.3 years (range, 35-69 years), respectively. Most donors had been declared brain dead, with only 1 categorized as a cardiac death. The available data on male-female distribution showed a predominance of male donors and male recipients. The severity of liver injury varied from subcapsular hematoma to deep ruptures leading to liver resection in 4 cases (9.3%). In 2 cases (4.6%), a superselective embolization had to be used to stop the bleeding, and in 8 cases (18.6%) perihepatic packing was necessary. Other intraoperative hemostatic management tools of the liver included digital compression, suturing, and electrocautery. No hepatic vascular avulsions were reported. There were only 3 cases of vascular involvement: 2 donors had laceration of the hepatic veins and 1 donor had injury to the vena cava. Most of the reported lacerations were found in the right lobe. The main indications for transplant in recipients were hepatocellular carcinoma and hepatitis C virus-related cirrhosis. The mean cold ischemia time was 8.9 hours (range, 4.5-12 hours). Median post-LTx follow-up was 22 months (range, 2-94 months). Reported compli­cations included 3 patients (6.9%) with PNF, 3 patients (6.9%) with primary poor function (IPF), 2 patients(4.6%) with biloma, 2 patients (4.6%) with rejection, and 1 patient each with subhepatic hematoma, liver abscess, and renewal of hepatic artery.

Except for 2 patients who only had 2 and 3 months of follow-up, for all other reported cases, the cumulative 6-month graft and patient survival rates were 78% and 82.9%, respectively.

The COVID-19 pandemic has caused temporary declines in the supply of organs for transplant, exacerbating the problem of donor shortages and leading to a renewed debate on how to prioritize patients during such periods.

Among the various options to expand the pool of available organs, there is also the possibility of the use of lacerated livers, which are generally considered high-risk organs for the development of IPF or PNF as a result of several risk factors such as parenchymal injury per se, injury aggravated by warm or cold ischemic time, or bleeding from lacerated regions leading to parenchymal hypoperfusion. At present, there are no guidelines governing the use of lacerated livers for transplant. The increase that would result from the use of these livers would probably allow patients with lower MELD scores (ie, <25) to be transplanted before the onset of debilitating complications of liver disease.

In 1999, Broering and colleagues3 examined 28 donated organs that were procured from trauma patients and were considered injured. In this series, half of the livers were considered macroscopically injured, whereas the remaining 14 showed no macroscopic changes but only elevated liver enzymes and were therefore discarded from review. Patient survival was 86% in the macroscopically injured group and 79% in the other group; however, incidence of primary graft failure was higher in the first group (21% vs 0%).3 This result was not confirmed in the recent work from Geenen and colleagues,9 in which no differences were shown in 3-month and 1-year survival rates between groups with minor and major liver injuries.

Tector and colleagues presented a total of 15 donated organs with lesions worse than grade I that were transplanted without any postoperative complications.14 Results from this study were in agreement with the case series presented by Bova and colleagues, which showed that transplant of organs with minor injuries can be performed with good short- and long-term results.10

Tucker and colleagues6 presented the first transplant of a traumatized liver from a controlled donation after cardiac death. The investigators, after performing perihepatic packing to achieve hemostasis, were able to immediately procure the liver after the donor’s death. Macroscopically, the liver had a grade II injury but was considered suitable for transplant. The recipient recovered well after surgery and did not show any complications despite a short period of rejection. In our clinical case described in this report, bleeding was controlled by liver packing, open treatment, and superselective embolization.

Open treatment can lead to a number of complications, particularly infections with multidrug resistant bacteria. The first successful use of a liver from an open abdomen was reported by Grezzana Filho and colleagues.15 The peritoneal fluid from the donor was positive for gram-negative rods, and piperacillin-tazobactam was administered to the recipient until posttransplant day 7. The recipient was discharged on postoperative day 25 with no evidence of infectious or surgical complications. In another report from Watkins and associates,16 the peritoneal fluid culture was positive for multidrug-resistant Pseudomonas aeruginosa, which had been transmitted to all recipients (heart, liver, and 2 kidneys). The liver recipient had sepsis after transplant and died on day 38 after transplant; however, the cause of death was unrelated to multidrug resistance. This study raised concerns regarding safety with open abdomen donors. In our case report, there were no infectious complications during the postoperative period. Therefore, we suggest that a donor with an open abdomen is acceptable with caution, especially in cases of prolonged packing, as this would increase the risk of bacteremia and consequently the risk of rejection.

Lai and colleagues11 described the first transplant of a lacerated liver in which, after unsuccessful liver packing and hepatic arteriography, bleeding was stopped through a superselective embolization of arterial branches VI to VII. Organ reperfusion was homogeneous, no bleeding was detected from the lacerated areas, and immediate restoration of liver function was observed. Superselective embolization was also performed in our case after unsuccessful packing. Despite good outcomes in these patients, in our opinion, the systemic application of embolization in severely lacerated livers for a LTx should be avoided, and only well-selected organs not affected by major vascular or biliary injury should be considered for this approach.

Another major concern in the use of lacerated livers for LTx is to always rule out vascular injury. To detect such complications, including vascular disruptions or intimal injuries, CT and magnetic resonance image-angiography of the donor’s liver or angiography during the back-table procedure should be performed. Occult vascular injury should be looked for particularly on the posterior table, as it appeared in 3 of the 43 allografts in our literature review. In our reported case, because of the absence of any obvious vascular injury or perfusion disturbance in the performed CT scan of the liver, we did not see any necessity for additional angiographic studies during bench surgery.

The COVID-19 pandemic has exacerbated the shortage of organs for transplant. In this context, reorganization of resources requires adjustments in clinical practice, and the use of lacerated livers for transplant could be a viable option as long as these types of transplant procedures are performed by experienced liver surgeons.

From the 1Department of General Surgery and Liver Transplantation Service, San Camillo Forlanini, Italian National Institute for the Infectious Diseases “L. Spallanzani,” Rome, Italy; and the 2School of Medicine and Surgery, University Milano-Bicocca, Monza, Italy
Acknowledgements: The authors have not received any funding or grants in support of the presented research or for the preparation of this work and have no declarations of potential conflicts of interest.
Corresponding author: Marco Angrisani, L. Spallanzani, Via Giacomo Folchi 6A, Rome, Italy
Phone: +3389405777
E-mail: marco.angrisani3@gmail.com 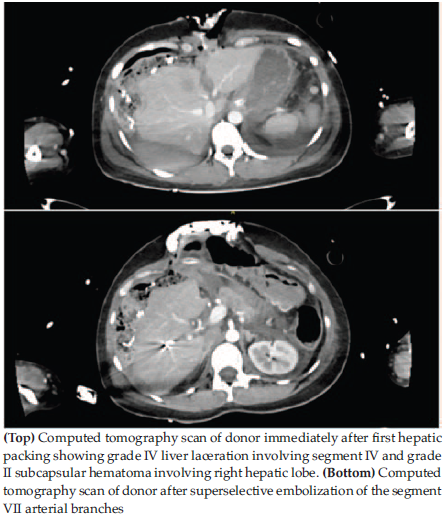 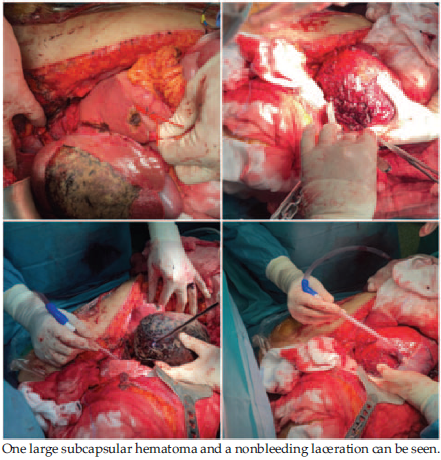 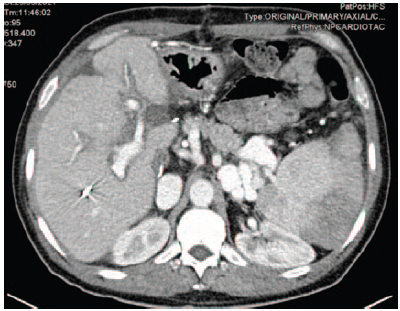 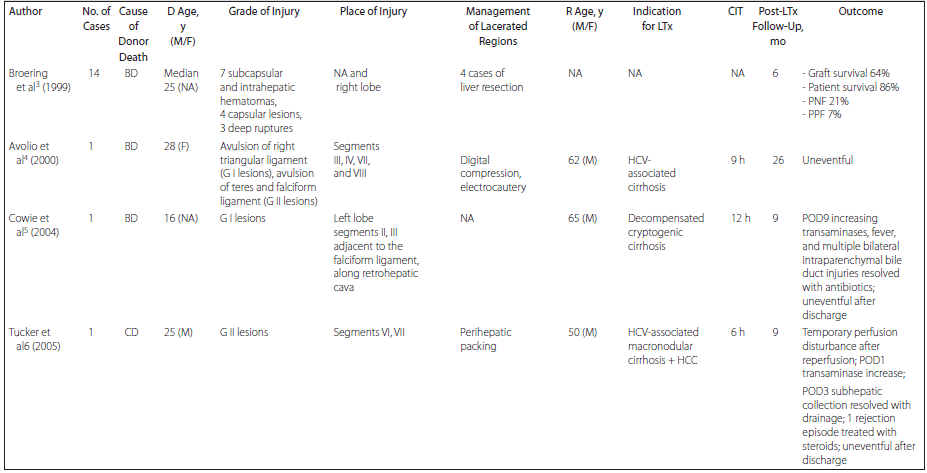 Table 1. Review of Cases in the Literature Of Transplantation Using Lacerated Livers 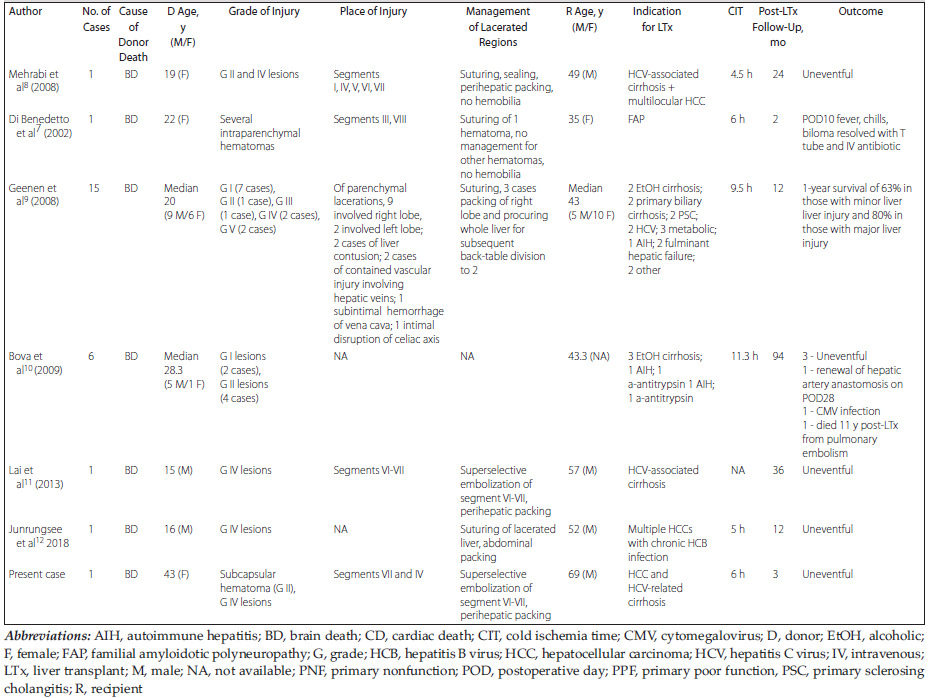 Table 1 (Continued). Review of Cases in the Literature Of Transplantation Using Lacerated Livers