Pancreas transplant in combination with kidney transplant, either simultaneous (SPK) or pancreas after kidney (PAK), is an established treatment for patients with diabetes mellitus who develop renal failure, and pancreas transplant alone (PTA) is indicated for patients who develop hypoglycemic unawareness and associated unstable/labile diabetes (also known as brittle diabetes) despite optimal medical therapy.1,2 Pancreas transplant can significantly improve patient survival and quality of life, prevent and/or improve some of the secondary diabetic complications, and provide independence from insulin therapy.3

Despite the increase in potential organ donors, there has been a decline in pancreas transplants during the 10-year period of 2004-2013.4 This trend has been reversed in the past 5 years, at least in United States. Many potential donor organs are not used for transplant, and pancreas discard rates are high.5 In the United Kingdom approximately 72% of all pancreases procured for transplant are discarded.6

A study by Mittal and colleagues7 has shown that graft failure rates among pancreas transplants approach 10% after 1 year. In the United States, the 90-day failure rate has steadily declined to 6.9% in 2019.8 The relatively high rate for early graft failure for pancreas transplant (eg, compared with kidney transplant) has incentivized the development of scoring systems to facilitate improved organ utilization and better outcomes. In 2008, the Eurotransplant Pancreas Advisory Committee introduced the Preprocurement Pancreas Suitability Score system (P-PASS).9 The P-PASS has a range of 9 to 27 and is calculated solely from 8 donor factors: donor age, sex, body mass index (BMI, calculated as weight in kilograms divided by height in meters squared), intensive care unit stay, cardiac arrest, serum sodium, serum amylase or lipase, and adrenaline or dobutamine. Preprocurement Pancreas Suitability Scores of 17 or less have been deemed ideal for prediction of graft function, and higher P-PASS scores are associated with higher rates of graft failure.10-13 However, studies have not found any association between P-PASS score and long-term graft survival.13-15

Another scoring system is the Pancreas Donor Risk Index (PDRI), which has been developed from the large national registry for donated organs in the United States.16 The PDRI comprises the 6 donor factors of age, sex, race, BMI, donor type (either donation after brainstem death or donation after circulatory death), and donor cause of death. There are also 2 transplant factors: cold ischemia time and type of transplant (SPK, PTA, or PAK). Although small studies in Spain17 and Brazil18 have concluded that PDRI cannot predict pancreatic graft outcomes, larger European Studies have validated the use of PDRI to estimate graft outcomes.5,7,15

The objective of our study was to investigate the ability of the US PDRI and the European P-PASS systems to retrospectively predict outcomes for a population of pancreas recipients in Wales, UK.

Patient population
All patients who underwent a pancreas transplant (SPK, PTA, or PAK) from December 2004 to December 2017 in a single center were identified from a prospectively updated and maintained database. The Cardiff Transplant Unit is 1 of 8 transplant units in the United Kingdom that perform pancreas transplants, and it serves a population of over 2.3 million within a large geographic area.

Demographic data were collected from the donors (age, sex, BMI, cause of death, and warm and cold ischemia times) and recipients (age, sex, duration of diabetes, pretransplant glycated hemoglobin A1c level, associated renal failure, any previous transplants, human leukocyte antigen mismatch, and duration of follow-up). Additional data were collected from donors and recipients to calculate the P-PASS and PDRI. The primary outcomes were defined as presence of rejection episodes, 1-year and 5-year graft survival rates, duration of hospital stay, and patient survival.

Calculation of Preprocurement Pancreas Suitability Scores and Pancreas Donor Risk Indexes
The P-PASS was calculated according to the model proposed by Vinkers and colleagues,9 and the US PDRI was calculated from the equation proposed by Axelrod and colleagues.16 We used an iOS-based software application (Pancreas Transplant DRI app, developed by Marc L. Melcher, from https://apps.apple.com/dk/app/pancreas-transplant-dri/id396068767). For patients with mixed ethnicity, the ethnicity selection option within this app was set to “Caucasian.”

Statistical analyses
All data analyses were performed with Prism software (version 9.0, GraphPad). Patients were divided into groups based on P-PASS (scores <17
and ?17) and PDRI (indexes ?1.57 and >1.57). The chi-square test for association was used to analyze the observed and expected frequencies. P < .05 was considered significant.

Graft survival times were censored for death, and graft failure dates were defined as the date for recommencement of antidiabetic/insulin therapy that continued for over 14 days. Cumulative survival was calculated with the Kaplan-Meier life table method, and differences in survival between groups of patients were analyzed by the log-rank method. Binary regression analysis was used to identify the effect of individual risk factors on acute rejection.

In a binary regression analysis for acute rejection, we observed that donor age and recipient sex were the main risk factors associated with more rejection episodes (P = .035 and P = .036, respectively) (Table 2), which explained the underlying possible association between PDRI and acute rejection.

This study showed that overall higher PDRI and
P-PASS were associated with a numerically higher number of rejection episodes and lower rates of graft survival. For graft survival, these numerical differences were not statistically significant. For rejection, a higher PDRI was associated with significantly higher number of acute rejection episodes. We observed no effect of PDRI or P-PASS on patient survival or duration of hospital stay. The data we present here suggest that the use of these 2 systems to evaluate pancreases for transplant is questionable.

The demand for pancreas transplants continues to grow, and rigorous selection and optimal utilization of organs are important factors for successful outcomes. The European P-PASS and the US PDRI systems are designed to facilitate effective and objective evaluation of data from pancreas transplant donors. We performed this study to investigate the ability of these models to retrospectively predict outcomes. The calculated values for P-PASS and PDRI showed good correlation, and neither system appeared superior for prediction of pancreas transplant outcomes. However, this correlation may represent a form of selection bias by the pancreas surgeon during selection of potential grafts, whose independent decision may consider factors identical to most (if not all) of the components/factors of both systems.

Vinkers and colleagues9 have previously stated that ideal donors should have a P-PASS of <17. Some studies11,19 have reported an association between higher graft survival and lower P-PASS scores. However, more recent studies,10,13-15 including those from the Eurotransplant pancreas transplant centers, have shown that P-PASS scores were not associated with pancreas graft survival. Our results are in line with other published studies,10,13-15 and we observed no statistical significance in graft survival between the 2 P-PASS groups. The numerical difference between graft survival in P-PASS <17 and ?17 reduced with the time posttransplant. Thus, utilization of grafts with P-PASS ?17 can be considered safe as a  to expand the donor pool with the usual caveats.

This present study also showed that rates of biopsy-proven acute rejection after pancreas transplant are associated with high PDRI scores. To our knowledge, no other study has reported this association. A regression analysis was performed to identify the predictive factors for pancreas rejection. We found that donor age was highly predictive of rejection rates. This is supported by studies on the effect of immunosenescence on transplant outcomes. Older donors might elicit a more potent immune response within the recipient, and this response may lead to more episodes of acute graft rejection.20-22 In addition, female sex within recipients was significantly associated with more episodes of rejection, and this has also been supported in previous studies and may be the result of greater likelihood of pregnancy-associated preexisting antibodies against anti- human leukocyte antigen23 despite negative crossmatch.

This study has several limitations. This is not a randomized controlled trial and has inherent problems associated with retrospective data analysis. However, a randomized controlled trial in this area would not be ethically appropriate, and although data analysis was performed retrospectively, the data were collected and maintained prospectively. The second limitation is the sample size. Although the overall number of patients included in our study was reasonable, we were compelled to divide the patients into relatively small groups, which increased the possibility of a type 2 statistical error. We assumed that all cases of acute rejection were referred to our transplant center for follow-up treatment. Also, we excluded rejections that were diagnosed without a biopsy; however, given that untreated rejection can lead to graft failure, this is unlikely to be a significant factor.

The P-PASS and PDRI systems were not helpful to predict graft survival and patient survival after pancreas transplant in our population. Use of these models as basis for organ selection remains questionable. Our study showed a significant association between PDRI scores and acute graft rejection, and our hypothesis provides an explanation for this finding; however, future studies with larger cohorts are required to verify or refute our findings. 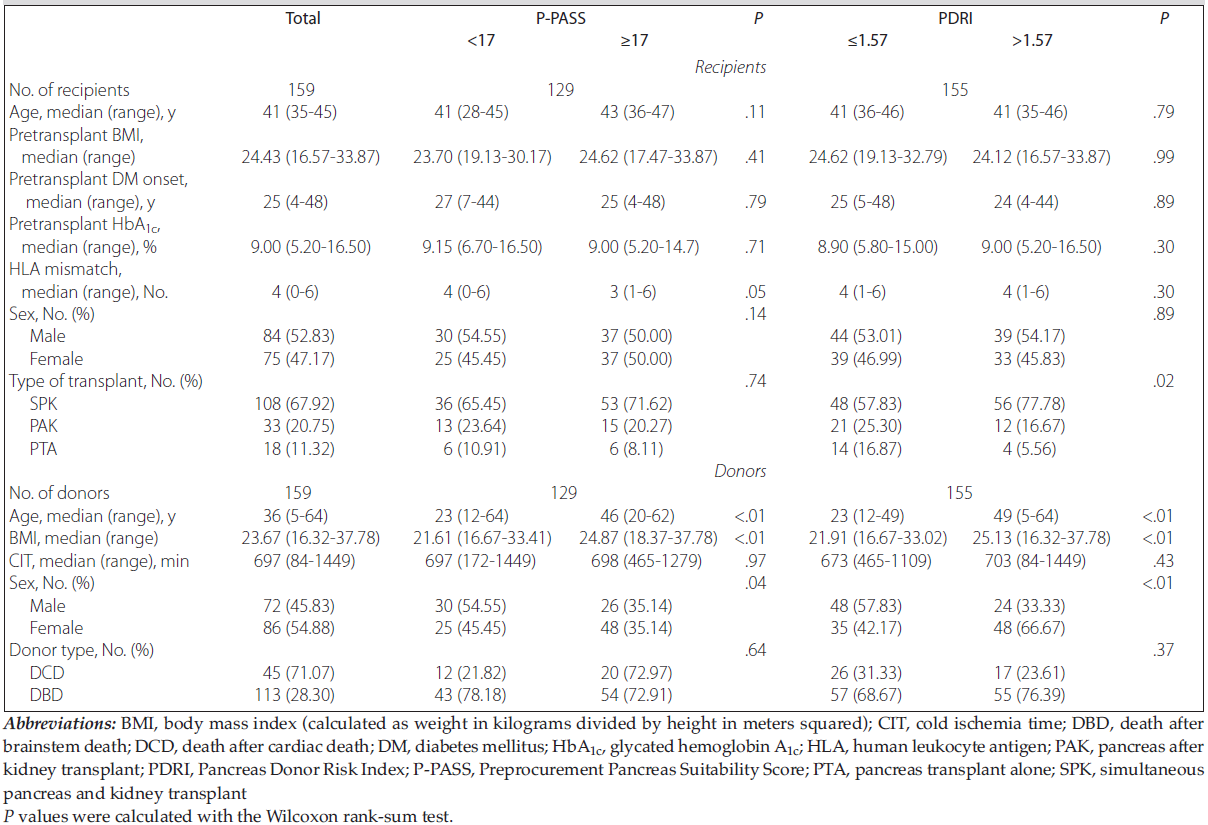 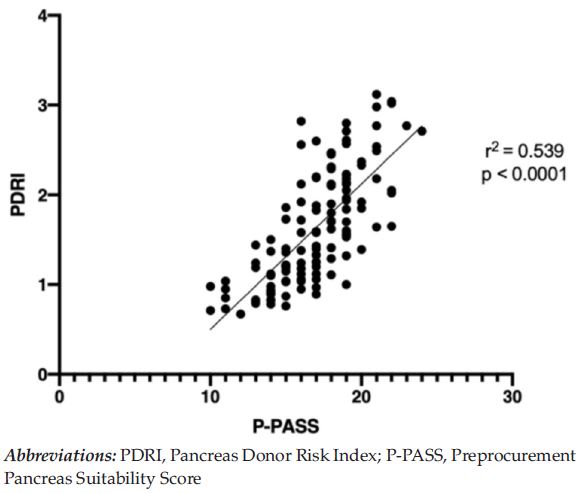 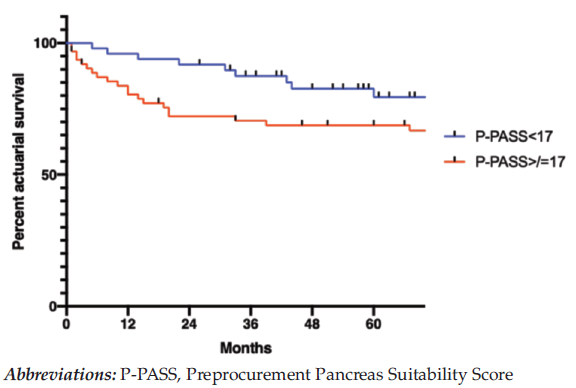 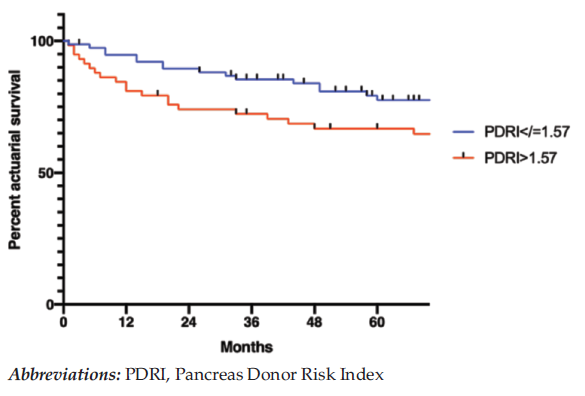 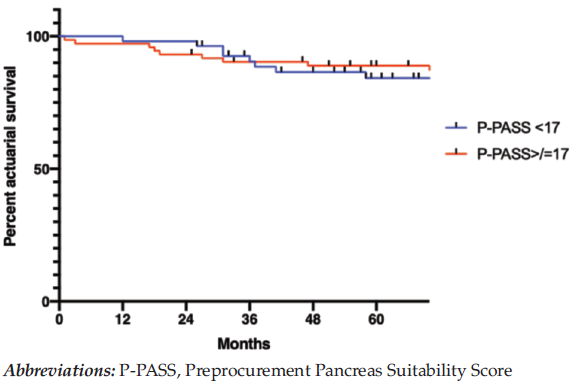 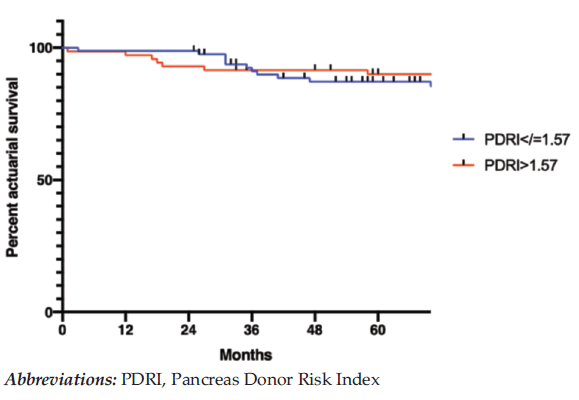