Objectives: We evaluated 23 years of data for cornea donors at the Istanbul Faculty of Medicine Lions Eye Bank.
Materials and Methods: Annual statistics of corneal donors between 1996 and 2019 were reviewed retrospectively. Records for 2008 and previous years were compared with records for 2009 and years thereafter, to assess donor demographics and reasons for discard of corneas.
Results: A total of 3849 corneas were obtained from 2018 donors during a 23-year period. Of these, 26 donors (11.2%) were registered, whereas 1792 (88.8%) did not register any decision for donation. There were 210 (5.46%) corneas discarded for positive serology and 291 (7.56%) for unsuitable tissue morphology, and 3348 (86.98%) corneas were determined to be suitable for transplant. For the cause of death in 2009 and subsequent years, the incidence of trauma was lower (P = .001) compared with the years previous to 2009, whereas incidence of cardiac pathology (P = .014) was higher. The number of donors older than 50 years was higher for 2009 and years thereafter, compared with data from earlier years (P = .024). The rate of discarded corneas for unsuitable tissue morphology (P = .004) and total discarded corneas (P = .027) decreased in 2009 and years thereafter. The rate of discarded corneas for HIV was higher after for 2009 and years thereafter (P = .047), whereas the rate of discarded corneas for syphilis was significantly higher for 2015 and years thereafter (P = .001).
Conclusions: This study evaluated the most extensive eye bank data in Turkey and found that advances in lamellar surgery techniques and improvements in specular microscopic facilities have expanded the pool for corneal transplants to include tissues from older donors. Moreover, the incidence rates for HIV-positive and syphilis-positive serology tests in discarded corneas have increased over time.

Most of the information about eye banking in Turkey is obtained from short-term studies,5-10 except for 2 articles with 9 years11 and 14 years12 of follow-up. Annual statistical reports are available from the eye bank associations of developed countries, such as the European Eye Bank Association, the Eye Bank Association of Australia and New Zealand, and the Eye Bank Association of America. However, these countries represent less than 15% of the world population, and the data retrieved from these associations do not include the data of developing countries.1 Hence, there is a need in developing countries to create eye bank databases to facilitate effective strategies to fight against corneal blindness.

We evaluated the donor data obtained from the Istanbul Faculty of Medicine Lions Eye Bank, which was established in 1996 and is a member of the International Federation of Eye and Tissue Banks. Here we report the changes for a period of 23 years.

Principles of the Declaration of Helsinki were followed during the study, and ethical approval was obtained from the Ethics Committee of the Istanbul Faculty of Medicine (Institutional Review Board No. 2020/1609). Because the research was performed with data from deceased donors, informed consent was not required. The records of cornea donors from October 1996 to December 2019 were reviewed retrospectively.

Cornea recovery and preservation
The instructions from the International Federation of Eye and Tissue Banks were used to calculate proper plasma dilution levels to prevent false-negative serology results, and tissues were not procured from donors who failed to meet the minimum medical standards of the International Federation of Eye and Tissue Banks. The eyes of the donors were examined with a penlight by an eye bank technician before procurement. If the donors were considered suitable, then the corneoscleral discs and blood specimens were obtained with an aseptic technique. The corneoscleral discs were preserved at 4 °C in corneal storage donor tissue preservation media (OptiSol-GS, Bausch and Lomb) from 1996 to 2013; however, an alternative synthetic media for corneal storage (Eusol-C, Alchimia) was used from 2014 to 2019.

The blood specimens were transported to the laboratory for serological evaluation, and screening tests for hepatitis B virus surface antigen (HBsAg), hepatitis C virus antibody (anti-HCV), anti-HIV, and syphilis were performed. For syphilis diagnosis, the VDRL test was first performed; if the initial test was positive, then a treponemal test was performed for confirmation. The corneoscleral discs from donors with positive serology were discarded.

Tissue evaluation
A slit-lamp biomicroscopic examination of the corneoscleral discs was performed to determine tissue suitability. The corneoscleral discs were examined for the presence of scars, edema, arcus senilis, stria, epithelial defects, endothelial guttata, infiltrates, or foreign bodies. Tissues with scars, infiltrates, or endothelial guttata, or with excessive edema and stria, were considered unsuitable.

A model LSM-2100C microscope (BioOptics) was used for specular microscopic evaluation from 1999 to 2005, whereas a Konan Medical Eye Bank Kerato Analyzer (model EKA-04) was used from 2008 to 2019. Endothelial cell density, coefficient of variation, and hexagonality were measured. Specific criteria were required (ie, cell density >2000 cell/mm2, coefficient of variation ?40%, and hexagonality ?50%) before the corneoscleral discs were considered suitable to transfer to corneal transplant centers for penetrating or endothelial keratoplasty. If the tissues were not suitable for penetrating or endothelial keratoplasty, then these were transferred for anterior lamellar keratoplasty.

Data classification
Donors were divided into 5 groups according to age distribution and serological agents and into 6 groups according to the cause of death. The eye bank had no specular microscope during the periods from 1996 to 1999 and from 2005 to 2008. In 2009, a new specular microscope was obtained that improved the quality of tissue evaluation; therefore, the records before 2009 were compared with the records for 2009 and thereafter.

New eye banks were established in Turkey in 2012, and some of the eye bank tissue resource centers were separated and transferred to another eye bank by the Ministry of Health. Hence, the data obtained in 2012 and previous years were compared with the data obtained in 2013 and years thereafter to determine the number of corneas recovered from donors. An increase in syphilis seropositivity after 2014 was suspected; therefore, the records of syphilis seropositivity before 2015 were compared with the records for the period of 2015 and years thereafter.

Statistical analyses
The Shapiro-Wilk test was used to test the normality of the data. An independent samples t test was used for data that fit the normal distribution. Otherwise, the Mann-Whitney U test was used. All data were analyzed with SPSS software (version 22.0). P < .05 was considered statistically significant.

Comparisons of donor demographics and cause of donor death for 1996-2008 versus 2009-2019 are detailed in Table 1 and Table 2, respectively. Serology tests and data for recovered corneas were compared between the 2 groups, as shown in Table 3 and Table 4, respectively.

We compiled annual data for distribution of donor age groups (Figure 1), cause of donor death (Figure 2), number of discarded tissues for positive serological tests (Figure 3), and data for recovered corneas and corneas released for surgery (Figure 4).

Eye banks play an essential role in corneal transplant, and information obtained from the banks is crucial for the improvement of national transplant policies. The Istanbul Faculty of Medicine Lions Eye Bank is the third oldest eye bank in Turkey. This study evaluated the most extensive set of eye bank epidemiological data in Turkey.

There was a reduction in the number of tissue resource centers connected to the eye bank in 2013, and this resulted in a reduction in the number of corneas procured from donors per year in 2013 and thereafter (Figure 4). Although the number of corneas procured per year in this study was similar to the number reported for other eye banks in Turkey (92.66-106.1 corneas per year),8,10,11 this is far lower than the number reported for eye banks in countries such as the United States,13 Brazil,14 India,15 and Iran.16 This low rate of cornea procurement could be the result of donor candidates’ lack of trust in the health care system, insufficient legal regulations, and/or religious beliefs, or there may be other factors. Thus, there is a need for new national policies to improve rates of cornea donation in Turkey.

From 2009 and years thereafter, there was a decrease from previous years in the incidence rate for trauma as the cause of death, whereas the incidence rate for cardiac pathology, which became the primary cause of death, increased (Table 2). These results are similar to the those reported in previous studies (cardiac death, 25%-37%).13,14,17 The number of donors who were at least 50 years old was higher for 2009 and years thereafter compared with the earlier period (Table 1). For the period of 2009 and years thereafter, there were statistically significant reductions in the rate of discarded corneas for unsuitability of tissue and the rate of total discarded tissue (Table 3) compared with the period previous to 2009. There were improvements in specular microscopy resources at the eye bank after 2009 that facilitated recovery of corneas from older donors. Also, improvements in surgical techniques facilitated the use of corneas with low endothelial quality for anterior lamellar keratoplasty.

An increase in time between death and blood specimen procurement is associated with an increased risk of false-positive serological results caused by hemolysis.18,19 To avoid false-positive results, blood specimens must be obtained from donors within 10 to 12 hours after death,20 and the mean death-to-preservation time in our study was within this standard. False-positive serological results may result in erroneous discard of corneal tissues by eye banks, or the recipients may be unintentionally infected during the corneal tissue transplant.20 Therefore, safety evaluation of corneal tissues is an essential task for eye banks.

In our study, the rate of discarded corneas for syphilis infection was 0.44%. The rate of donors with syphilis-positive tests was found to be 0.4% to 0.5% in the other studies in Turkey7,11,12 and 0.24% in the United States.13 Our findings show that the rate of discarded corneas for syphilis increased significantly in 2015 and subsequent years. Syphilis rates have increased since 2011 in the European Union and European Economic Area26 and since 2012 in Turkey.27

Although there is growing interest in lamellar keratoplasty techniques worldwide,31 none of the eye banks in Turkey has any dedicated precut tissue facilities. Therefore, surgeons at cornea transplant centers must prepare the tissues for lamellar surgeries in their own facilities, which is time intensive. Improvements in availability of precut tissue services could encourage surgeons to perform endothelial cornea transplants.

There are some limitations to this study. Since there was no specular microscope at the eye bank during 1996-1999 and 2005-2008, the data before 2009 were not homogeneous. In addition, the legal regulations regarding eye banks have been in flux over the years. There were administrative and financial problems that resulted in substantial turnover of eye bank technicians. The lack of long-term experience among eye bank technicians during this period may have contributed to longer times of blood specimen procurement after donor death, which in turn may have caused an increase in false-positive serological tests for those years.

The advances in lamellar surgery techniques32 have facilitated the use of corneas with low endothelial quality for anterior lamellar keratoplasty. If there were sufficient endothelial reserve, then tissues from older donors could be used for corneal transplant at newly improved specular microscopic facilities. The incidence rates in discarded corneas for HIV-positive and syphilis-positive serology have increased. Prevention of the transmission of diseases to patients from donors through corneal transplant is a primary duty of eye banks. National standardization of donor eligibility criteria is essential to protect public health during the transfer of tissues between eye banks across the country. This study evaluated the most extensive eye bank data in Turkey, and these data may be used to improve the standards of national eye banks in developing countries.

From the Istanbul Faculty of Medicine, Department of Ophthalmology, Istanbul University, Istanbul, Turkey
Acknowledgements: The authors have not received any funding or grants in support of the presented research or for the preparation of this work and have no declarations of potential conflicts of interest.
Corresponding author: Emre Altinkurt, Istanbul University, Istanbul Faculty of Medicine, Department of Ophthalmology, 34093 Fatih/Capa, Istanbul, Turkey
Phone: +90 212 414 2000
E-mail: altinkurtemre@gmail.com 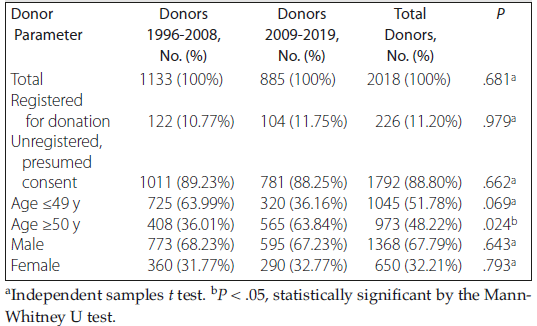 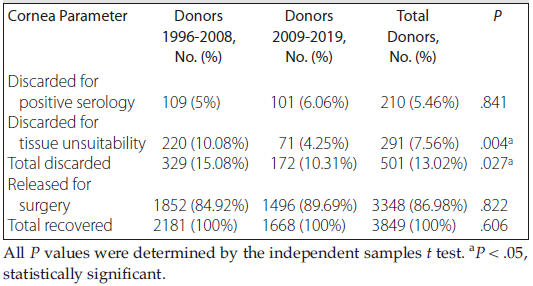 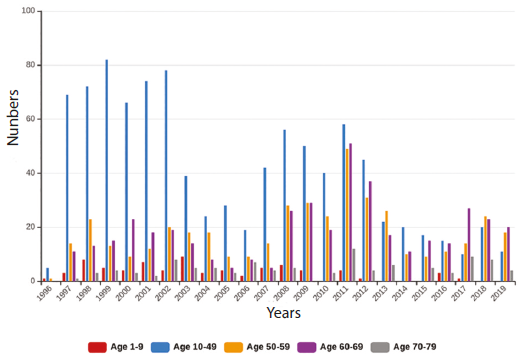 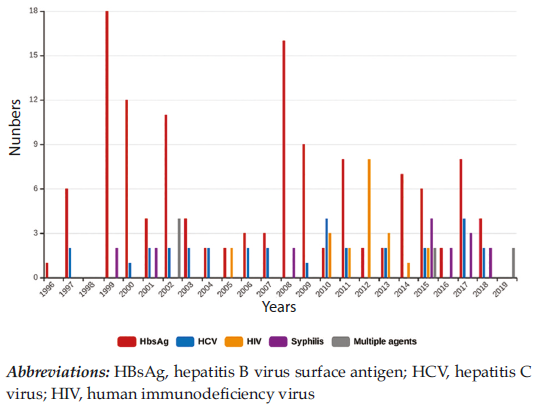 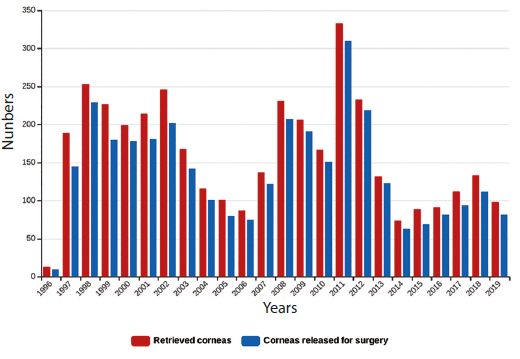