Early allograft dysfunction (EAD) after living donor liver transplant (LDLT) has been reported to range from 10% to 25%, and the cause is often multifactorial.1,2 Common risk factors for EAD in the LDLT setting are poor preoperative recipient condition, such as a high Model for End-Stage Liver Disease (MELD) score, need for preoperative organ support, older donor age, higher donor body mass index (BMI, calculated as weight in kilograms divided by height in meters squared), low graft-recipient weight ratio (GRWR), left-lobe grafts, and higher portal perfusion pressure leading to graft injury and posttransplant sepsis.2 If these patients are supported during the period of graft dysfunction, most would recover without any long-term consequences.3 However, despite advances in care of patients after liver transplant, there remains a high risk of early liver graft loss after EAD of up to 24% in the first 90 days.3

Therapeutic plasma exchange (TPE) has been reported to be beneficial in the management of acute liver failure and acute-on-chronic liver failure.4,5 Therapeutic plasma exchange can theoretically improve the milieu around the graft liver and thereby enhance regeneration, improve coagulation profile, and avoid cerebral edema.6 The beneficial role of plasma exchange is the clearance of ammonia, inflammatory cytokines, and markers of oxidative stress, as well as amelioration of dysregulated immune system.7,8 There have been reports of TPE use in the deceased donor liver transplant (DDLT) setting, where it has led to improvement in EAD in a few cases of primary nonfunction.9-12 However, there are also reports that TPE is associated with higher mortality and graft loss in the DDLT setting.13,14

To date, there are only a few reports of TPE use in the LDLT setting (Table 1).15-18 All of these studies have shown higher morbidity and mortality when graft dysfunction occurs in the setting of LDLT. Except for a single study,17 all others have reported beneficial effects of TPE to overcome the ill effects of EAD.15,16,18 We have used TPE as an adjunct to standard supportive therapy for EAD after LDLT since 2015. The aim of the current study was to evaluate our practice of using TPE in the management of EAD after LDLT.

Local trust board ethics approval was obtained for this study. Data were retrieved from a prospectively maintained institutional liver transplant database. All consecutive adult LDLTs (all were first-degree or second-degree related donors) performed between January 2015 and February 2019 (50 months) were included.

Early allograft dysfunction was defined by the Olthoff criteria as the presence of 1 or more of the following: day 7 bilirubin ≥10 mg/dL or interna­tional normalized ratio (INR) ≥1.6, or alanine aminotransferase or aspartate aminotransferase >2000 IU/L within the first 7 days.19 Patients who had EAD were identified from the database, and patients who received TPE along with standard supportive treatment were compared with those who did not have TPE during the study period. For those who had TPE, the number of TPE sessions, the postoperative days when TPE started and ended, and any TPE-related or transfusion-related adverse events were noted. Primary outcomes for the study were 30-day and 1-year survival rates. Secondary outcomes included grade III or higher Clavien-Dindo complications and lengths of ICU and hospital stays.

Details of therapeutic plasma exchange
Decisions regarding initiation and continuation of TPE were individualized and planned during daily multidisciplinary meetings. Patients with EAD and evidence of nonhepatic organ dysfunction with systemic inflammatory response syndrome were considered for TPE. Further sessions were based on trend in liver function tests and the clinical condition of the patient. Therapeutic plasma exchange was terminated when there was consistent clinical improvement or severe deterioration considered to be futile.

The Spectra Optia therapeutic apheresis system (Terumo BCT) with centrifugal technology was used for TPE. In all TPE procedures, acid citrate dextrose A anticoagulation with the inlet-to-anticoagulant ratio between 1:12 and 1:15 and dual vascular access were used. Patient total blood volume (BV) was calculated by the Nadler formula, and plasma volume (PV) was calculated according to the formula PV  =  BV × (1  −  hematocrit).20 Low-volume plasma exchange was performed, in which 1 to 1.5 plasma volumes per session were replaced with saline, albumin, and/or fresh-frozen plasma.

Statistical analyses
Categorical variables are expressed as the frequencies and proportions (%), and continuous variables are presented as median values with interquartile ranges (IQR). Categorical variables were analyzed by the Fisher exact test or the chi-square test and continuous variables by the nonparametric Mann-Whitney U test. For all analyses, we compared 2 groups: the TPE group and the group without TPE. P < .05 was considered statistically significant. Multivariate logistic regression analysis was performed to identify factors that predicted the use of TPE for EAD. Kaplan-Meier survival curves were studied with log-rank statistics to assess the patient survival. Cox regression analyses were performed to identify the independent predictors of survival. A receiver operating curve (ROC) analysis was used to identify the cutoff value of the number of TPE sessions that was predictive of treatment success. Based on the area under the ROC (AUC), the sensitivity and specificity of the number of TPE sessions was identified. All statistical analyses were performed with SPSS software (version 26.0).

Over the 50-month study period, 659 LDLTs were performed, of which 465 (70.6%) were adult trans­plants and 194 (29.4%) were pediatric transplants. Sixty-seven adult patients (14.4%) had EAD, of which 43 had TPE and 24 had no TPE. Fourteen of these 43 patients had TPE before or in the immediate period after transplant; hence, these patients were excluded from the study. Five of these preoperative or early TPEs were for acute liver failure and 9 were for acute-on-chronic liver failure.

Postoperative outcomes for the groups with and without therapeutic plasma exchange
Consistent with the higher rate of preoperative AKI, more patients in the TPE group needed posttransplant renal replacement (51.7% vs 8.3%; P < .001). There was no difference in vascular or biliary complications between the 2 groups, but the septic complications were significantly higher in the TPE group (62.1% vs 12.5%; P < .001). Although the posttransplant sepsis rate was high in the TPE group, most of the septic episodes were before the first TPE session (n = 9; range, 2-6 days before TPE start) and few were after TPE (n = 5; range, 3-8 days after the first TPE session) (Table 5).

Outcomes from the excluded cohort (n = 14)
The 5 acute liver failure and 9 acute-on-chronic liver failure patients who were excluded because of both pretransplant and immediate posttransplant TPE had a median pre-TPE bilirubin level of 15 mg/dL (IQR, 10-32 mg/dL). The median number of TPE sessions in this cohort was 4 mg/dL (IQR, 2-18 mg/dL). Five patients died within 90 days in this cohort (35.7%), all from septic complications.

This is the first study to compare the outcomes of TPE with no TPE for EAD in the LDLT setting alone. The use of therapeutic plasma exchange for EAD after LDLT in our cohort did not show clear survival benefits, and it is unclear whether this treatment is associated with higher mortality. Early allograft dysfunction associated with posttransplant sepsis and the need for renal support are significant risk factors for mortality. In our study, we found that that no improvement of graft function after 3 sessions of TPE predicted mortality.

The largest report of TPE use in EAD compared 107 TPE patients with 36 patients without TPE; however, 66% were LDLTs and 34% were DDLTs. The investi­gators performed an average of 10 sessions of TPE for any recipient who had bilirubin >10 mg/dL on 3 consecutive days, which is not a standard accepted definition for EAD. They patient cohort with TPE had much better 30-day and 1-year survival (82% and 54%) compared with the cohort without TPE (58% and 22%, respectively).15 Other studies that reported on the use of TPE for EAD in LDLT did not compare results with patients without TPE or did not use a standard definition for EAD (Table 1).16-18

All the early deaths in our study were in the TPE group; however, this finding did not implicate TPE as the cause for higher sepsis and increased mortality. Of note, TPE patients were much sicker and had greater incidence of pretransplant AKI (55.2% vs 25.0%; P = .009) and sepsis (37.9% vs 16.7%; P = .087) compared with patients without TPE. Previous studies have shown that pretransplant renal issues and sepsis may lead to worse outcomes after transplant.21,22

Plasma exchange has the potential to improve survival in sepsis by removal of inflammatory cytokines and restoration of deficient plasma proteins.23,24 However, the efficacy of plasma exchange as a treatment strategy for sepsis and septic shock was refuted by a meta-analysis of 194 patients and subsequently by a Cochrane review of 200 high-volume hemodiafiltration patients that suggested low-quality studies and no overall benefit compared with standard treatment.25,26 One of the problems of plasma exchange is nonselective removal of substances from the blood, including antibiotics and immunosuppression agents that are crucial for the management of posttransplant sepsis.27 The amount of a particular substance removed during TPE is determined by factors related to the plasma exchange procedure such as volume of exchange, duration of procedure, and the frequency of TPE.28 Therefore, our protocols of using low-volume exchange, restricting the duration of the TPE procedure to 2 to 3 hours, and adjusting the timing/dose of antibiotics and immunosuppressants are important aspects for consideration. With its known benefits in antibody-mediated rejection, we found that none of our TPE patients had rejection before the first discharge from hospital compared with 4 in the group without TPE, all of which responded to pulse steroids (P = .036).

From our series, we identified that recovery of liver function after TPE was characterized by the ability to maintain low bilirubin, whereas progressive liver failure was associated with worse levels of bilirubin. Therefore, clinical correlation is imperative, and hence a protocol to perform a definite number of TPE sessions may not be advisable. Although our study had a small number of patients, we suggest that the daily trend in bilirubin and enzyme levels should guide further sessions, rather than a large number of consecutive sessions that may not be needed and may actually increase the risk of line-related and other transfusion-related complications.

Liver graft dysfunction along with the need for renal support are 2 of the most difficult conditions to manage in a posttransplant patient and may lead to a vicious cycle and no improvements despite the best intensive care management. Both of these conditions add to increased risk of early bacteremia (AUC, 0.707; P < .001), with was shown in a study of 610 LDLTs. That study also showed that EAD significantly correlated with nonresolving infection (correlation coefficient, 0.305; P < .05).29 Posttransplant EAD has been independently associated with renal nonrecovery in liver transplant recipients who are on renal replacement therapy for a short duration pretransplant. Furthermore, EAD in the setting of renal nonrecovery also resulted in the worst survival outcomes.30 Together, these findings could have led to the high mortality shown in our TPE cohort.

Therapeutic plasma exchange may provide effective liver support for EAD patients, but the associated renal dysfunction and sepsis may increase mortality in these high-risk patients. There is need for randomized studies to further evaluate the role of TPE in post-LDLT EAD.

From the Institute of Liver Disease & Transplantation, Dr. Rela Institute & Medical Centre, and the Bharath Institute of Higher Education & Research, Chennai, India
Acknowledgements: The authors have not received any funding or grants in support of the presented research or for the preparation of this work and have no declarations of potential conflicts of interest.
Author contributions: ARH and MSR planned and designed the study. JS and SS collected the data required for the study. DS was the transfusion medicine specialist involved in the therapeutic plasma exchange procedures for the patients. ARH performed the statistical analyses and wrote the manuscript. DS, DJ, AR, MSR, and MR reviewed and revised the manuscript.
Corresponding author: Professor Mohamed Rela, Dr. Rela Institute & Medical Centre, No. 7, CLC Works Road, Chromepet, Chennai, Tamil Nadu 600 044, India
Phone: +91 44 6666 7788
E-mail: mohamedrela@gmail.com 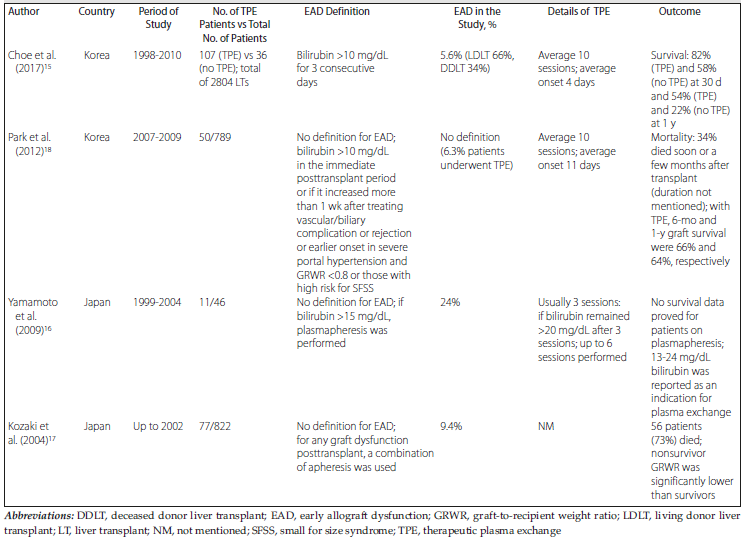 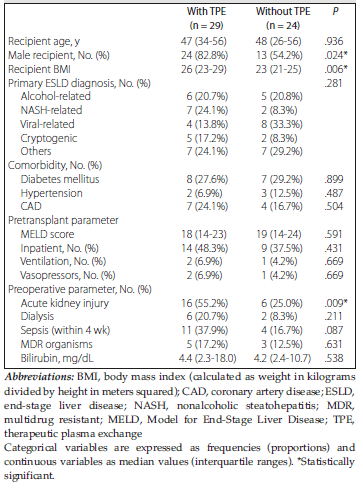 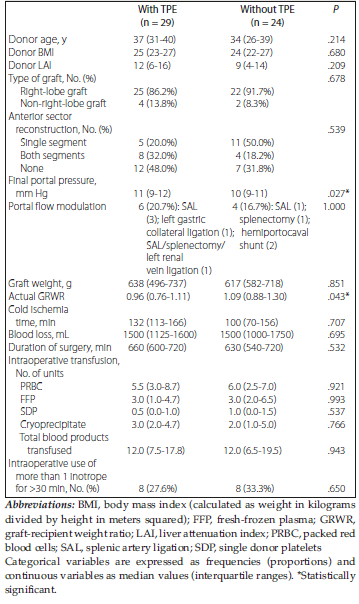 Table 3. Demographics and Intraoperative Factors for Liver Donors to Recipients With or Without Therapeutic Plasma Exchange

Table 4. Blood Parameters Before and After Therapeutic Plasma Exchange (n = 29)

Table 5. Outcomes for Recipients With or Without Therapeutic Plasma Exchange) 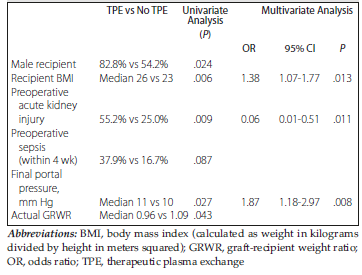 Table 6. Preoperative and Intraoperative Factors That Independently Predict the Need for Total Plasma Exchange in Patients With Early Allograft Dysfunction 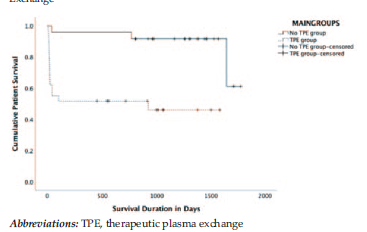 Figure 1. Patient Survival in Groups With or Without Therapeutic Plasma Exchange 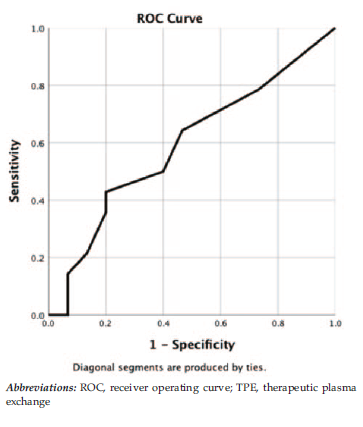 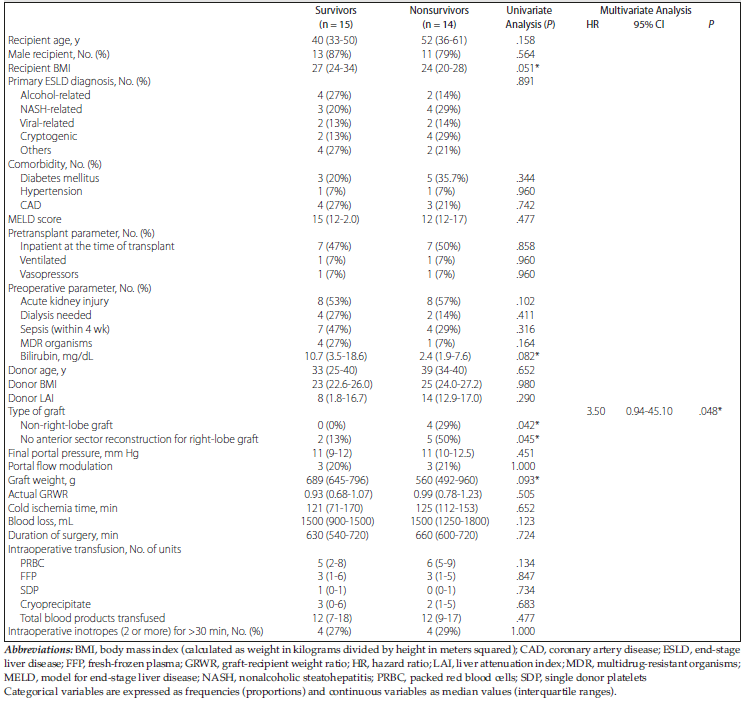