Portopulmonary hypertension (PoPH)1 is considered the direct effect of bacterial translocation (BT) from the gut and vasoconstrictors that are present in the lungs as a result of a portosystemic shunt.2,3 Additionally, PoPH is worsened by capillarization of the hepatic sinusoid, by increasing intrahepatic production of vasoconstrictors, and by low production of vasodilators such as prostacyclin (prostaglandin I2, ie, PGI2) and nitric oxide.2,3 After liver transplant (LT), the patient may develop cor pulmonale, such as expansion of pulmonary artery, massive bilateral pleural effusion, and expansion of the right ventricle, and this is considered a subclinical pulmonary hypertension (PH) state equivalent to PoPH. Our studies have shown that extrasinusoidal platelet aggregation (EPA) resulting from sinusoidal endothelial cell injury and subsequent veno-occlusive disease (VOD) also cause PH4-10 after LT. Additionally, BT has been shown to induce sinusoidal endothelial cell damage and platelet activation by neutrophil extracellular traps (NETs) in sinusoids, causing EPA and affecting PH formation after LT.7,9,11 Therefore, we hypothesized that perioperative enhancement of intestinal immunity may foster suppression of BT and reduction of EPA, resulting in a reduction of post-LT subclinical PH.

Perioperative administration of a phosphodi-esterase 3 (PDE3) inhibitor, which has antiplatelet and protective effects on sinusoidal endothelial cells and which has been shown to reduce ischemia-reperfusion injury (IRI) during LT,12-15 has also been shown to reduce EPA following IRI. Thus, PDE3 inhibitors may suppress subclinical PH after LT.16 Intensive insulin therapy with a closed-loop artificial pancreas, which can strictly control the blood glucose level without hypoglycemia, also has a protective effect on sinusoidal endothelial cells, and thus, it was introduced in the LT perioperative period.17 Additionally, prostaglandin E1 (PGE1), which has antiplatelet, vasodilation, and anti-inflammatory effects,18 and PGI2, which has antiplatelet, vasodilation, and vascular endothelial protective effects,19,20 have been shown to improve insulin resistance21 and are already in use for PoPH.22

Based on Japanese public insurance requirements, PGE1 and PGI2 are administered during the LT perioperative period to reduce subclinical PH by reduction of EPA. Additionally, for recipients who undergo artificial ventilation after transplant, sivelestat is administered to control intrasinusoidal and intrapulmonary NETs caused by BT from the gut.23,24 In related living donor LT, appropriate graft selection is performed to avoid severe small-for-size graft syndrome, and splenectomy is actively performed to control portal venous pressure.

This retrospective study was approved by the Kanazawa University Ethics Committee (approval No. 2018-007), and informed consent was obtained from all living recipients who were included in this study. The study protocol for the artificial pancreas was approved by the institutional review board of Kanazawa University Hospital. The study was conducted in accordance with the Declaration of Helsinki (Clinical Trial ID: UMIN000016451; https://rctportal.niph.go.jp/). The need to acquire written informed consent from deceased recipients was waived because of the retrospective nature of this study.

In 28 recipients who underwent graft liver biopsy in the acute phase after LT, immunohistochemical staining for glycoprotein Ib? (GpIb?, ie, CD42b) of platelet surface antigens was performed with liver biopsy specimens to evaluate state of EPA and VOD.

Prostacyclin analogue
To evaluate the cardiovas­cular function, a pulmonary artery catheter was inserted just before surgery, after introduction of general anesthesia, and was left in place until the patient was removed from the ventilator after surgery. Then, in patients with subclinical PH who had a pulmonary artery wedge pressure ?15 mm Hg and a mean pulmonary artery pressure ?25 mm Hg, beraprost (PGI2 analogue; Kaken Pharmaceutical) was administered orally at 30 to 60 ?g/d.

Sivelestat
Postoperatively, in patients who were on artificial ventilation because of respiratory distress syndrome associated with systemic inflammatory response syndrome, we expected to suppress NETs introduced by BT from the gut with 4.8 mg/kg/d sivelestat (Maruishi Pharmaceutical), which was administered based on public insurance parameters.

Immunohistochemistry for extrasinusoidal platelet aggregation evaluation
Platelet activation and aggregation in the sinusoid, the perisinusoidal space (space of Disse), and the parenchyma of the graft liver were evaluated by immunohistochemical staining for platelet surface receptor CD42b.4-6 The expression of CD42b was examined immunohistochemically with the respective primary antibodies with the EnVision+ system (Dako). Dewaxed 4-?m sections were incubated with 1:50 with protein blocking serum for 10 minutes to block nonspecific binding proteins, and immunostaining was performed with the EnVision+ system (Dako). Briefly, the slides were incubated with each primary antibody (1:50) at 4 °C overnight. After wash, the EnVision+ polymer solution was applied for 1 hour. The reaction products were visualized with 3,3?-diaminobenizidine tetrahydrochloride (Sigma Chemical) and H2O2. The specimens were then lightly counterstained with hematoxylin and examined under a fluorescence microscope. Primary antibodies used for immunostaining were CD42b rabbit antihuman polyclonal antibody (Atlas Antibodies). A similar dilution of control rabbit immunoglobulin G (Dako) was applied instead of the primary antibody, as a negative control. Positive and negative controls were routinely included.

Radiologic examination
Posttransplant contrast-enhanced MDCT images of the chest and abdomen were available for 49 recipients. Slice thickness for each examination ranged from 2.0 to 5.0 mm in all cases.

Statistical analyses
Numerical data are presented as the mean ± SD and compared by the Student’s t test or Welch’s t test. Correlations between the 2 factors were evaluated with the chi-square test. Overall survival was compared by the log-rank test with the Kaplan-Meier method. SPSS software was used for the analyses. P < .05 was considered statistically significant.

In 28 patients who underwent graft liver biopsy during the acute phase after LT in groups A and B, liver biopsy specimens were immunohistochemically evaluated for EPA. As shown in Figure 3, the degree of EPA was significantly lower in the preemptive bundle therapy group B compared with group A, and 80% of group B recipients were EPA grade 0, which indicated that there was no EPA. This result confirms that group B had good platelet count recovery and that the recovery after transplant for this group was quicker compared with group A.

A PDE3 inhibitor could be a key drug in preemptive bundle therapy. The efficacy and safety of a PDE3 inhibitor preadministration for IRI, EPA, and VOD have been extensively shown, including in our research.12,13,16,26 However, clinical application of PDE3 inhibitor has not been reported; here, we have described its clinical use in the present study.

The monocrotaline (MCT)-induced hepatic EPA and VOD animal model that we used in previous studies26,27 also induces PH,28,29 which suggests that EPA is a trigger for PH. Previously, we had used clinical data and the MCT-induced VOD rat model to show that the pathophysiology of VOD involves sinusoidal endothelial cell damage and subsequent EPA.26,27 We have also demonstrated that EPA and VOD are significantly reduced by either oral preadministration or portal vein preinjection of a PDE3 inhibitor, which protects and strengthens sinusoidal endothelial cells, with the MCT-induced VOD rat model.26,30 Additionally, we found that PH was also reduced (unpublished data).

We have also observed no effect of postad­ministration PDE3 inhibitor in MCT-induced EPA and VOD models.26 Preemptive therapy is critical to avoid serious EPA, VOD, and PH. Therefore, we injected perfusate (University of Wisconsin solution) that included a PDE3 inhibitor and continued intravenous administration for recipients when oral intake was not possible, including during surgery. When oral intake was possible, the medication was taken orally.

Because PGE1 has been shown to reduce IRI in sinusoidal endothelial cells,18 PGE1 was continuously administered for preemptive therapy and to control intraoperative hypertension. Because PGE1 has an antiplatelet aggregation effect, fibrinolytic activity, vasodilation activity, an anti-inflammatory effect including inhibition of tumor necrosis factor ? release from Kupffer cells,18 adhesion molecule expression, and neutrophil adherence to endothelial cells, PGE1 is expected to protect vascular endothelial cells including sinusoids and reduce EPA and NETs, thereby reducing transmission of death mediators and vasoconstrictors from the liver to the lungs. Similarly, PGI2, an anti-PH drug, has an antiplatelet effect, a vasodilation effect, a protective effect on vascular endothelial cells, and a cytoprotective effect on liver cells.19,20 Therefore, hepatoprotection including sinusoidal endothelial cells and pulmonary arterial pressure reduction effects are expected. Additionally, PGI2 enhances endothelial nitric oxide synthase activation by stimulating insulin in vascular endothelial cells and improves insulin resistance by restoring the capillary dilatation ability and insulin transfer to the skeletal muscle stroma.21 Therefore, a synergistic effect with intensive insulin therapy using a closed-loop artificial pancreas is expected. Prostacyclin also increases hepatic venous blood flow without increasing portal venous pressure,22 so it is highly likely to reduce pulmonary arterial pressure, which is useful for PH.

Prevention of BT by preemptive bundle therapy suppresses NET, further reduces sinusoidal endothelial cell injury, and reduces EPA and VOD and thereby reduces subclinical PH and leads to rapid recipient recovery. Recovery of the blood platelet count is a good barometer of recipient recovery after LT.37 However, in this study of 28 recipients with graft liver biopsy, an inverse correlation was found between platelet level recovery and EPA grade, indicating that EPA was a main cause of transfusion-resistant thrombocytopenia after LT. However, the rapid recovery of platelets after LT in group B may also be the result of the high frequency of splenectomy.

This study has some limitations including the small number of patients and the retrospective study design. For all recipients of LT after 2014 (group B), enhanced MDCT was performed frequently in the acute phase after LT; however, in earlier LT, MDCT was performed only in recipients for whom computed tomography was deemed necessary. Additionally, bias in group A patients cannot be ruled out. To show the usefulness of preemptive bundle therapy, a multicenter prospective randomized control study is required. However, it is not ethical to conduct this double-blind study in Japan, where living donor LT is relied upon, because there is a risk that the recipients may be disadvantaged by not receiving preemptive bundle therapy. Therefore, in the future, we will conduct a multicenter prospective single-arm study.

From the 1Department of General and Digestive Surgery, Kanazawa Medical University, Kahoku, Ishikawa, Japan; the 2Department of Gastroenterologic Surgery, Kanazawa University, Kanazawa, Ishikawa, Japan; and the 3Department of Surgery, Toyama Prefectural Central Hospital, Toyama City, Toyama, Japan
Acknowledgements: The authors have not received any funding or grants in support of the presented research or for the preparation of this work and have no declarations of potential conflicts of interest. The authors are grateful to Nagata, who is affiliated with the Radiology Center of Kanazawa Medical University for measuring the cross-sectional area of the pulmonary artery with Ziostation2 analysis software, and are grateful to the staff at Kanazawa University Hospital (Kanazawa, Japan). We also thank Jodi Smith, PhD, from Edanz Group for editing a draft of this manuscript.
Corresponding author: Hiroyuki Takamura, Dept. of General and Digestive Surgery, Kanazawa Medical University, 1-1 Daigaku, Uchinada-Machi, Kahoku, Ishikawa 920-0293, Japan
Phone: +81 76 286 2211
E-mail: takamuh@kanazawa-med.ac.jp 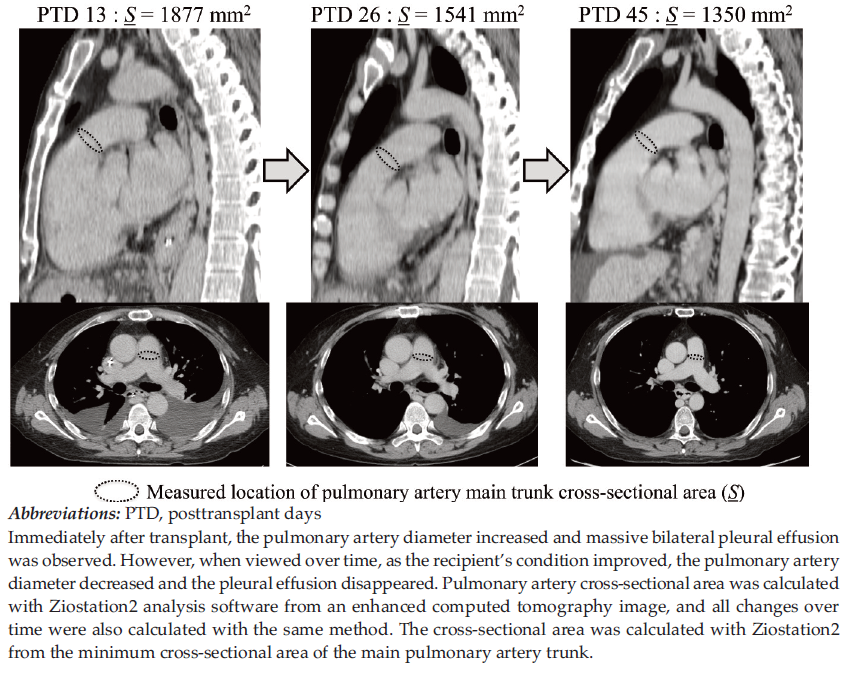 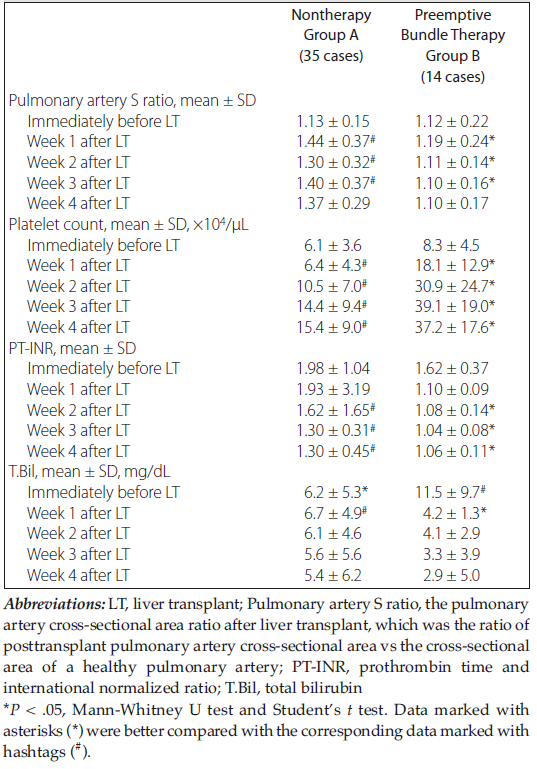 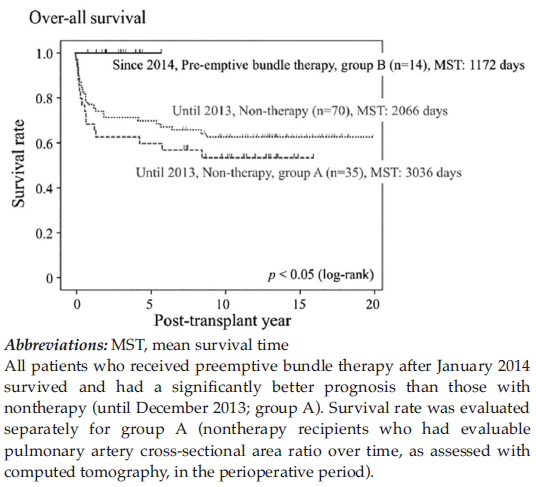 Figure 2. Overall Survival Rate of Recipients After Liver Transplant Was Evaluated Separately for Patients With and Without Preemptive Bundle Therapy 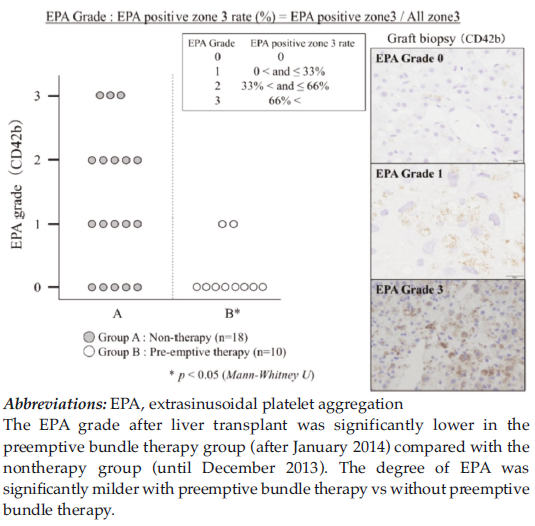