Nontuberculous mycobacteria (NTM) are ubiquitous in the environment; more than 190 species have
been identified.1 Over the past few years, trends of increasing prevalence of NTM pulmonary infection have been reported in the general population.2-4 Solid-organ transplant recipients have an increased risk of infection, including NTM pulmonary infection, due to suppressed cell-mediated immunity.5-7 Although these infections are less common than other infections in the transplant recipient population, NTM is a source of significant morbidity and mortality. This is partly because of delayed diagnosis, which frequently results from difficulties in disease recognition.5-7

Study population and design
This retrospective study was conducted at the Rabin Medical Center, the sole center for lung transplantation in Israel. Figure 1 presents the study design. From January 1997 to March 2019, 713 lung transplantations were performed. We identified 699 patients according to the following eligibility criteria: age ?18 years and regular follow-up. Of eligible patients, NTM pulmonary infections were diagnosed in 67 patients. We excluded 9 patients due to the development of NTM before transplant (n = 7) or infection with Mycobacterium gordonae (n = 1) or Mycobacterium tuberculosis (n = 1). Of the 690 patients included in the cohort, 58 (8.4%) developed NTM pulmonary infections after lung transplant.

The study was carried out in accordance with the Declaration of Helsinki and was approved by our Institutional Ethics Committee.

Follow-up protocol
Lung transplant recipients are routinely evaluated in the ambulatory clinic of our institution at 2 and 4 weeks posttransplant and then every 2 months, on average, thereafter. More frequent visits are scheduled when a clinical need arises. Follow-up includes a detailed medical interview, physical examination, chest radiograph, and pulmonary function test. At our center, all pulmonary function test measurements are performed on the ZAN 530 system (Zan Messgeräte GmbH). The measurement technique and reference values are calculated according to European clinical practice guidelines.14,15 Chest computed tomography (CT) scans are routinely performed at 6 and 12 months posttransplant and then annually.

Bronchoscopy
All bronchoscopic examinations included in this study were performed at our pulmonary institute. Three scheduled bronchoscopies with bronchoalveolar lavage (BAL) are performed routinely at 1 and 2 weeks and at 1 month posttransplant. Additional bron­choscopic examinations are performed according to clinical need and in patients with clinical deterioration (ie, worsening dyspnea and pulmonary function tests), abnormal findings on chest CT, unresolved pneumonia, lobar atelectasis, suspected lung rejection, or bronchial stenosis.

Bronchoalveolar lavage procedure
To prevent contamination by upper airway flora, the BAL trap used to collect the specimen is connected to the suction channel of the bronchoscope only after the bronchoscope traverses the vocal cords. The bronchoscope is wedged into a subsegmental bronchus (usually toward the place of infiltrate, when present), and 3 aliquots of sterile saline (50 mL each) are instilled and aspirated.

Data collection
Data were obtained from electronic medical record database systems that integrate medical information from all hospitals in Israel. These data included the following variables: age, sex, single or double lung transplant, diagnosis that led to transplant, the type of Mycobacterium species, and the forced expiratory volume in 1 second (FEV1) over the duration of the study period. At the end of the follow-up period, vital status or date of death were ascertained from hospital records and the registry of the Israeli Ministry of Internal Affairs.

Statistical analyses
Descriptive data are expressed as means and SD or numbers (percentages) of presented cases. We used the chi-square test for categorical variables and the t test for continuous variables. P < .05 was considered statistically significant. We compared FEV1 values between patients with and without NTM pulmonary infection using a linear mixed model with random effects. A Cox proportional hazards model with time-dependent covariates was used for analysis of the association between NTM pulmonary infection and survival. Statistical analysis was performed using SAS software, version 9.2 (SAS Institute Inc).

Baseline characteristics
Table 1 presents the baseline characteristics of the study population (n = 690). Mean age of the study population was 53.9 ± 13.2 years; 63.1% were males. Pulmonary fibrosis and emphysema were the most common etiologies for lung transplant. Nontuberculous mycobacteria isolates were identified on BAL cultures in 58 patients (8.4%). Demographic characteristics, transplant types, and the etiologies for the lung transplantation were comparable between the patients with and without NTM pulmonary infections.

Pulmonary lung function
During the follow-up period, mean FEV1 did not differ significantly between patients with and without NTM isolates (P = .29; Figure 3).

Survival
During the study period, 393 of the lung transplant patients died (56.9%). The mortality rates were higher among those with NTM pulmonary infection, that is, in 34/51 (67%) with NTM versus in 357/632 (57%) without NTM. Of the 7 patients with NTM pulmonary disease, 5 survived and 2 died. On multivariate analysis, NTM acquisition (infection or disease) after lung transplant, as a time-dependent variable, was significantly associated with increased mortality (relative risk of 2.41, 95% CI, 1.70-3.43; P < .001).

The most common NTM species isolated in our study were M. simiae (41.4%), which is generally considered nonpathogenic, and M. avium complex (20.7%), which is generally considered pathogenic. Diversity in the spectrum of NTM species among lung transplant recipients has been previously reported.8-11 Our results concur with other studies that identified M. avium complex as one of the common NTM species among lung transplant recipients.8-11 In contrast, M. abscessus was identified as the most prevalent isolate in 2 studies9,11 and M. simiae8 and M. fortuitum10 were the most prevalent in 1 study each. Our finding of M. simiae prominence corroborates other studies conducted in Israel that identified this as the most common NTM species among patients with cystic fibrosis17 and bronchiectasis.19

We reported different distributions of NTM species isolated within 6 months and at more than 6 months posttransplant. Specifically, isolates of M. simiae and M. fortuitum were more often identified early, within 6 months of transplant, whereas M. abscessus and M. avium complex were more often isolated at a later date. Moreover, M. simiae and M. fortuitum are considered less virulent and generally colonizers,3,16 whereas M. abscessus and M. avium complex are generally associated with NTM pulmonary disease. With a longer time elapsed since transplant, the cumulative effect of the immunosup­pressive drug regimen more likely increased the risk of pulmonary infection with more virulent NTM species. The clinical significance of the prevalence of various NTM species at different lapses of time following lung transplant should be investigated in larger patient populations.

Limitations of the present study include its retrospective single-center design, which represents 1 geographical region. Additionally, the number of patients with NTM pulmonary infections was relatively small and may have affected statistical power for comparisons of some relevant data. Notwithstanding, our study represents one of the largest investigations that have been conducted to date on lung transplant recipients with NTM pulmonary infection. 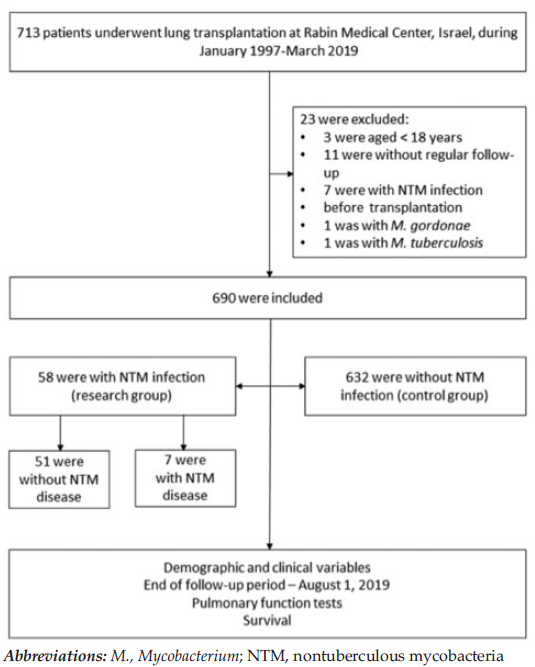 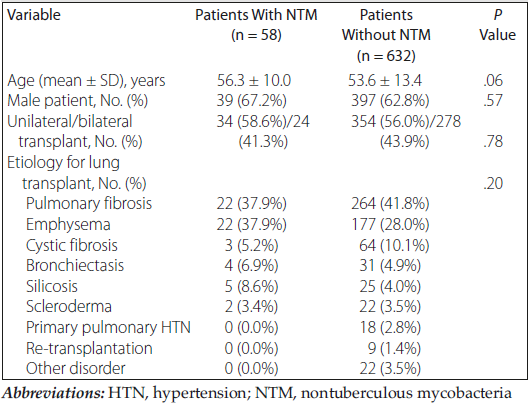 Table 1. Baseline Characteristics of Lung Transplant Recipients With and Without Nontuberculous Mycobacteria 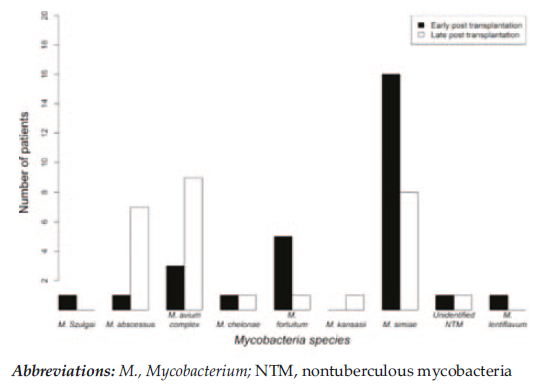 Figure 2. Spectrum of Nontuberculous Mycobacteria Species in the Early and Late Posttransplant Periods According to 6-Month Median Cut-off 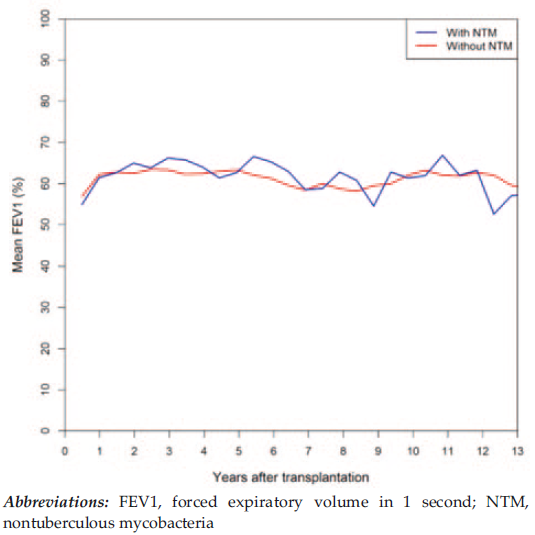