Objectives: Lung transplant recipients are at risk of developing many kinds of lung infection, such as community-acquired, nosocomial, opportunistic, and endemic. Here, we report a young lung transplant recipient who developed blastomycosis, which had most likely occurred following eculizumab treatment for atypical hemolytic uremia syndrome. We hypothesize that the agent interfering with C5 would influence the immune response against Blastomyces species. Although eculizumab has opened a new era for treatment of atypical hemolytic uremia syndrome and has led to the understanding that complement-mediated pathology is needed, the risk of potentially fatal infections by blocking the complement pathway has not been fully elucidated. Careful follow-up and frequent tests to look for infections are needed after using this monoclonal antibody.

Lung transplant recipients have a higher incidence of infections, many of which can affect the pulmonary allograft directly. The infections could be community acquired, nosocomial, opportunistic, and much less commonly endemic. Mechanisms for allograft infection include impaired airway clearance, direct exposure to organisms and different pollutants in the environment via direct inhalation, and higher levels of immunosuppression therapy required after lung transplant.1

The usual immunosuppressive regimen posttransplant includes the calcineurin inhibitors cyclosporine or tacrolimus, which prevent T-lymphocyte activation by inhibiting interleukin, and the nucleotide-blocking agents azathioprine and mycophenolate, which suppress T-lymphocyte proliferation by blocking nucleotide synthesis and corticosteroids. How these agents are associated with the complement system is not completely known.

Other noninfectious complications posttransplant include both acute and chronic renal dysfunction. It has been documented that 64% of recipients have at least 1 episode of acute kidney injury within the first 2 weeks posttransplant2 and that 15% of recipients have chronic kidney disease at 6 years post­transplant.3 Most cases of renal failure posttransplant are associated with exposure to calcineurin inhibitors. A small proportion of cases are the result of hemolytic uremia syndrome (HUS) due to thrombotic microangiopathy (TMA), which is a rare complication.4

Here, we report a young lung transplant recipient who developed TMA, followed by activation of Blastomyces infection, which may possibly have been a reactivation after treatment for his TMA.

The patient was a 46-year-old Canadian man with pulmonary fibrosis who underwent a left single lung transplant. There was a strong suspicion of collagen vascular disease due to previous history of uveitis and Reynaud syndrome, but this diagnosis was never proven. He did not have any other important medical or surgical history.

The donor for his transplant was a young man who had brain death. The donor did not have any significant medical history and had been otherwise healthy. The total lung preservation time was 5 hours (3 h and 45 min of cold ischemic time and 1 h and 15 min of warm ischemic time). The transplant procedure was uneventful, and the recipient did not require cardiopulmonary bypass or extracorporeal membrane oxygenation. The viral serology was donor and recipient negative for cytomegalovirus infection and Epstein-Barr infection.

The explanted left lung from the recipient showed advanced interstitial fibrosis with honeycombing changes consistent with usual interstitial pneumonia pattern but no evidence of any infection. His immunosuppression protocol as per the Toronto Lung Transplant Program protocol5 included cyclosporine, mycophenolate (because of intolerance to azathioprine before transplant), and prednisone. His posttransplant recovery was uncomplicated; he was extubated 2 days posttransplant and discharged 20 days posttransplant.

Surveillance bronchoscopy as per protocol5 done at 2 and 6 weeks and 3 months posttransplant did not reveal any cellular rejection in the biopsies, and no viruses, bacteria, or fungi were identified in his bronchoalveolar lavage (BAL) specimens. In addition, the recipient did not develop any donor-specific antibodies.

At 4 months posttransplant, pulmonary function test continued to show poor allograft function (Figure 1A), including forced expiratory volume in 1 second (FEV1) of 1.3 L (37% predicted), forced vital capacity of 1.4 L (31% predicted), FEV1-to-forced vital capacity ratio of 0.94, total lung capacity of 2.0 L (32% predicted), residual volume-to-total lung capacity ratio of 116% predicted, and diffusing capacity for carbon monoxide of 34% predicted. Because we considered this a possible rejection, he received a bolus with methylprednisolone followed by thymoglobulin and cyclosporine treatment was switched to tacrolimus without improvement.

Five months posttransplant, he showed a rather rapid decline of his renal function (Figure 1A). He was evaluated by the nephrology team who were concerned regarding connective tissue disease and renal impairment. He thus underwent a complete work-up, including kidney biopsy, which revealed TMA (Figure 1B). There was no thrombocytopenia or neurologic defects, and other investigations demonstrated normal titers for antinuclear antibodies, complement components, antineutrophilic cyto­plasmic antibodies, antiglomerular basement mem­brane antibody, and Von Willebrand factor-cleaving protease (ADAMTS13), resulting in the diagnosis of atypical HUS. Plasma exchange was instituted first without improvement. After long discussions, the decision was then to treat the TMA with eculizumab, which resulted in an initially good response of his kidney function, with creatinine decreasing from 510 to 240 μmol/L (Figure 1A).

Shortly after initiation of eculizumab treatment, the patient developed progressive respiratory distress requiring transfer to an intensive care unit where he was intubated. His chest radiograph showed air space consolidation with air bron­chogram in the transplanted lung. After a bron­choscopy and collection of BAL specimen, he was started empirically on treatment for possible infection with piperacillin/tazobactam and azithro­mycin. Unfortunately, he deteriorated progressively and died 1 week later.

The BAL sample taken in the intensive care unit showed Blastomyces dermatitidis, and his necropsy showed acute lung injury and widely spread nodular lesions consistent with blastomycosis in the transplanted lung (Figure 1C). The native lung showed end-stage usual interstitial pneumonia without any signs of infection. This suggested that the disease was a reactivation of an infection present in the transplanted lung. The cause of death was thus deemed to be blastomycosis.

This case report documents the development of Blastomyces infection in only the transplanted lung with the last agent of immunosuppression being eculizumab (Figure 1A). Transplant-associated TMA is a rare complication that can occur early after lung transplant with an incidence of 2.3% and median diagnosis time of 37 weeks.4 In the Toronto Lung Transplant Program, we have had 2 cases of biopsy-proven TMA in 1880 lung transplant recipients between 1983 and 2016 (incidence rate of 0.11%). Atypical HUS is a form of transplant-associated TMA and is a life-threatening syndrome characterized by formation of thrombi in the microcirculation consuming platelets and mechanically destructing red blood cells and leading to fever, acute kidney injury, and neurologic symptoms. Eculizumab is currently the treatment indicated for this kind of presentation.

Although blastomycosis is a rare disease affecting both immunocompetent and immunocompromised hosts, individuals on immunosuppression have 9.3 times a higher risk to be infected.6 However, it has been reported that this endemic fungal disease, although having a cumulative incidence of 0.14% to 0.5% in solid-organ transplant recipients, has been rarely seen in lung transplant recipients.7,8 In the Toronto Lung Transplant Program, the case we have presented here is the fourth case of blastomycosis (incidence rate of 0.21%). Interestingly, both the recipient and the donor had lived in an area with low incidence of Blastomyces, with an incidence of 0.02 cases per year per 100 000 for recipients and 0.11 cases per year per 100 000 for donors.9

The patient in our case had developed 2 rare complications in a short period of time. We hypothesize that one possibility for the development of such a rare infection was likely linked to the administration of eculizumab given at 6 months posttransplant. Up to that point, his chest radiographs and repeated computed tomography scans did not show any concerning lesions in the transplanted lung and no pathogenic organisms had been isolated in previous samples from sputum and BAL specimens.

Eculizumab is a recombinant, monoclonal antibody against complement protein C5 that inhibits the formation of C5 convertase and subsequent reactions initiating from C5a and C5b. Complement, although still not fully understood, prompts human phagocytes to attack Blastomyces dermatitidis and plays an important role in neutrophil-mediated eradication of the yeast.10 In addition, Blastomyces dermatitidis activates both the classical and alternative pathways in the human complement system, resulting in deposition of C3b and iC3b complement fragments on the yeast surface.11 With those features in mind, it should be reasonable that interfering with C5 would influence the immune response against Blastomyces dermatitidis.

In this report, we described a patient who developed blastomycosis after he was treated with eculizumab for atypical HUS. Although eculizumab has opened a new era for management of atypical HUS and has led to an understanding of complement-mediated pathology, the risk of potentially fatal infections by blocking complement pathways has to be considered. Careful follow-up and frequent tests to look for infections should be the norm after administration of this monoclonal antibody. 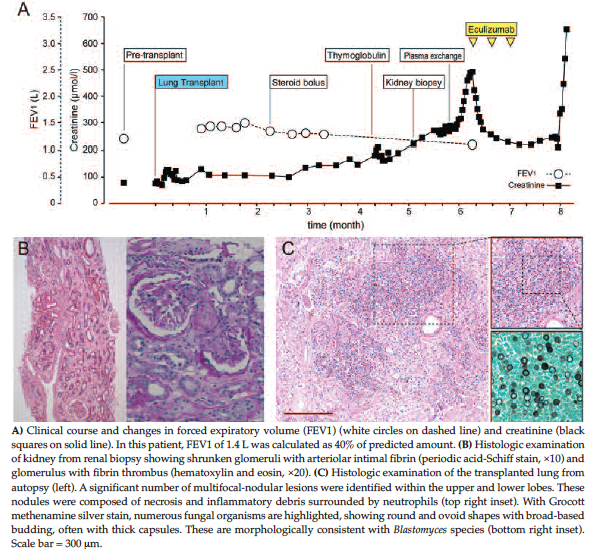 Figure 1. Clinical and Laboratory Results of a Lung Transplant Patient With Pulmonary Blastomycosis