Materials and Methods: The study protocol was approved by the French Minister of Research (APAFiS no. 18169). Insulin-dependent diabetes was induced by total pancreatectomy in one male Sus scrofa pig, and pancreatic allotransplant was performed, after total pancreatectomy, in 3 male Sus scrofa pigs. Total pancreatectomy was performed under general anesthesia, with meticulous dissection of the portal vein and the splenic vein to preserve the spleen. Concerning pancreas procurement, extensive pancreas preparation occurred during the warm phase, before cold perfusion. Pancreatic allotransplant was performed using
donor aorta (with superior mesenteric artery and celiac trunk).

Results: Diabetes induction was successful, with negative C-peptide values at 3 hours after total pancreatectomy. Glycemic control without hypogly­cemic events was obtained with the use of long-acting insulin administered once per day. No rapid-acting insulin was used. In animals that received pancreatic allotransplant, after enteral feeding was started, glycemic control without hypoglycemic events and without insulin was obtained in 2 animals.

Conclusions: In an experimental porcine model, diabetes induction by total pancreatectomy and pancreatic allotransplant after total pancreatectomy are feasible and effective. The development of these models offers the potential for new investigations into ischemia-reperfusion injuries, improvement of pancreas procurement methods, and preservation techniques.

Whole organ pancreas transplant can be indicated in highly selected patients with unstable and brittle insulin-dependent diabetes mellitus (type 1 diabetes). Technical advances in surgery and immunology, combined with meticulous donor screening, have reduced the mortality and morbidity of pancreas transplant.1,2 However, pancreas transplant pro­cedures are sensitive to ischemia-reperfusion injuries. Indeed, graft pancreatitis and thrombosis remain major causes of graft loss in the early days after transplant.3,4

A model of insulin-deficient diabetes and pan­creatic transplant in large animals is a key prerequisite in preclinical research, in particular with regard to ischemia-reperfusion injuries. There are presently 3 animal models that have been used for experimental diabetes induction and pancreatic allotransplant: rat, dog, and pig. The pig model is especially informative due to similarities of its vascularization and the morphology of the pancreas to humans. Moreover, Sus scrofa pigs are suitable for long-term studies, with low costs and more ethical application (eg, vs primates). Surgical procedure details of total pancreatectomy have been poorly described in the medical literature, and models of diabetes induction by surgical approach are sometimes ineffective.7

Experimental protocols
We performed diabetes induction by total pancre­atectomy in 1 male Sus scrofa pig and pancreatic allotransplants after total pancreatectomy in 3 male Sus scrofa pigs. All pigs had a body weight of 60 kg. The study protocol was approved by the French Minister of Research (APAFiS no. 18169). The study protocol was in conformity with the “Guide for the Care and Use of Laboratory Animals” (published by the National Institutes of Health 86-23, revised in 1985) and was in conformity with the ethical guidelines of the 1975 Helsinki Declaration. At the end of the experimental protocol, we carried out the euthanasia procedure using intravenous pento­barbital (140 mg/kg) under general anesthesia.

Anesthesia and intraoperative and postoperative monitoring
The anesthesia and monitoring protocols were similar for both diabetes induction by total pancreatectomy and pancreatic allotransplant after total pancreatectomy. Sus scrofa pigs were fasted for 12 hours before the surgical procedures. Animals received premedication with intramuscular injection of 15 mg/kg Zoletil (zolazepam/tiletamine; Virbac, Carros, France), after which they were intubated and ventilated with a mixture of isoflurane (2%), nitrous oxide (49%), and oxygen (49%). Cardiovascular and respiratory parameters, including mean arterial pressure, pulse rate, heart rate, and oxygen saturation, were monitored. A thermal probe located in the esophagus allowed temperature monitoring. A central venous line in the jugular vein allowed animal hydration and blood sampling and ensured analgesia. Postoperative analgesia was performed by opioid intravenous injection of Nubain (nalbuphine; Mylan, Canonsburg, PA, USA) supplemented by intravenous paracetamol 25 mg/kg. Prophylactic antimicrobial therapy was administrated with a single 250 mg/day dose of Cefovet (cefazoline; Dopharma, Ancenis, France). Food reintroduction was allowed 72 hours after total pancreatectomy. No immunosuppressive drugs were administered in the pancreatic allotransplant group.

Pancreatic allotransplant after total pancreatectomy
Sus scrofa pigs were selected based on their allogenicity (evaluated by mixed lymphocyte reaction) and their ABO blood group.

Donor surgical procedure
A midline laparotomy was performed, and the pancreas was exposed. The splenic artery and vein were then ligated to perform a splenectomy. The proximal part of the duodenum (after pylorus) and the third portion of the duodenum were prepared and stapled using a GIA stapler (Medtronic, Minneapolis, MN, USA). Adhesions between the pancreas head and the jejunum were dissected and severed. The mesentery root was stapled at a distance from the pancreas, also with the use of a GIA stapler. The aorta was dissected, and both renal arteries and veins were ligated to reduce the amount of flushing solution. The celiac aorta was also dissected by cutting the left pillar of the diaphragm. Intravenous heparin (300 IU/kg) was injected, and the aorta and the inferior vena cava were dissected and cannulated. The celiac aorta and the suprahepatic inferior vena cava were ligated. Hypothermic (4°C) IGL-1 (Institut Georges Lopez Company, Lissieu, France) flushing solution was used, and flushing was performed under low perfusion pressure (20-40 cm H2O) to reduce the risk of pancreatic edema. The inferior vena cava was then sectioned to evaluate the sufficiency of the perfusion. When the pancreas became pale and effluent from the inferior vena cava became clear, the hepatic pedicle was dissected. The common hepatic duct was then dissected and ligated, the proper hepatic artery was ligated and severed, and the portal vein was carefully dissected and severed from the pancreas, with consideration to maintain sufficient length for future transplant. The celiac and abdominal aortas were then severed, and all tissues behind the left side of the aorta were severed. Finally, whole pancre­aticoduodenectomy was performed.

Pancreas preparation and static cold storage
The pancreas allograft was stored in static cold storage solution (4°C) for 2 hours (n = 2) or for 6 hours (n = 1). The preservation solution used was IGL-1 for all cases. All lumbar arteries were ligated using a 5/0 nonabsorbable monofilament (Prolene), and all small blood and lymphatic vessels around the pancreas were ligated one by one. The tightness of the sutures was controlled by an aortic injection of preservation solution.

Diabetes induction by total pancreatectomy
Clinical outcomes and survival
One animal underwent the procedure without surgical or anesthesia-related complications. Glycemic control, without hypoglycemic events, was obtained using long-acting insulin (Lantus) once per day. No rapid-acting insulin was used. The animal was euthanized on postoperative day 12.

Pancreatic allotransplant after total pancreatectomy
Clinical outcomes and survival
Three animals underwent pancreatic allotransplant after total pancreatectomy. The organs were stored in static cold storage (4°C) for 2 hours for 2 cases (animals 1 and 2) and for 6 hours in 1 case (transplant-6h animal 3). No surgical or anesthesia-related complications occurred. Mean survival time was 27.7 ± 19.5 days. Animal 2 was euthanized on postoperative day 8 because of occlusive syndrome. No vascular thrombosis of the pancreatic graft was observed after death.

Inflammatory monitoring
Inflammatory monitoring results are summarized in Figure 4. After pancreatic allotransplant with total pancreatectomy, lactate levels were higher than the normal range for 12 hours due to surgical inflammation. After 12 hours, lactate levels decreased to normal range. Platelets, markers of chronic inflammation, were higher than normal-range levels during follow-up except in animal 2.

The development of a model of diabetes using swine offers the potential for new investigations in ischemia-reperfusion injuries, improvements of pancreas procurement and preservation, and human diabetes mellitus complications. Here, we reported an experimental porcine model of diabetes induction by total pancreatectomy and pancreatic allotransplant after total pancreatectomy. After total pancreatectomy, insulin-dependent diabetes mellitus occurred. Pan­creatic allotransplant with end-to-side anastomosis between the donor portal vein and recipient inferior vena cava and end-to-side anastomosis between the donor aorta and recipient aorta were feasible and effective.

Different diabetes induction models and pancreatic transplant models have been described. Heinke and associates8 reported a model of diabetes induction by total pancreatectomy in minipigs with simultaneous splenectomy. They reported a rapid increase of glucose immediately after total pancreatectomy, requiring insulin therapy. They also reported a complete insulin deficiency, as determined by negative C-peptide levels during glucose challenge. In our study, we were able to preserve the recipient’s spleen by the meticulous dissection of the portal and splenic vein. A splenectomy will compromise the immune competence of an experimental animal and could cause infectious complications under immunosuppression in the context of transplant studies. Chaib and associates9 also reported a model of diabetes induction by total pancreatectomy with spleen preservation. However, the left gastric artery was dissected and separated from its origin at the splenic artery. Because of left gastric artery ligation, the lesser curvature of the stomach will be vascularized by “back-flow” from the right gastric artery. However, the consequences of this change in arterial vascularization of the stomach have not yet been reported.

Fonouni and colleagues10 reported a simplified technique of pancreas transplant in a porcine model using an aortic jump graft, as also used by our group. Unlike human pancreas procurement, they reported extensive pancreas preparation (hepatic artery, bile duct and portal vein dissection, duodenal preparation and stapling, ligation of renal arteries) during the warm phase (before cannulation and cold perfusion). Their pancreas graft procurement with an aortic jump graft contained the superior mesenteric artery and celiac trunks. They concluded that an aortic jump graft allowed decreased warm ischemia and operative time. Zhang and associates11 also reported a porcine model of pancreatic allotransplant. Their group performed an end-to-end arterial anastomosis between the donor iliac artery bifurcation Y graft and the recipient superior mesenteric artery and celiac trunk. After arterial anastomosis, diabetes was induced by total pancreatectomy and then venous anastomosis was performed between the donor portal vein and the recipient superior mesenteric vein. This procedure induced extensive rewarming time due to total pancreatectomy. They reported a success rate of operation of 95.6% and incidences of 1 thrombosis and 1 duodenojejunal anastomotic leak.

Porcine models have the advantage of anatomic similarities to human pancreatic vascularization. Similar to the human pancreas, the porcine pancreas draws the vast majority of its blood supply from the celiac trunk via the splenic artery. The head is vascularized by the superior and inferior pancrea­ticoduodenal arteries, respectively, from the celiac trunk and superior mesenteric artery, with rich anastomosis between the vessels.12 The particularity of the porcine pancreas is its shape, with 3 lobes and annular form. Thus, the portal vein is surrounded by the pancreas, which requires meticulous dissection of the pancreas from the portal vein during total pancreatectomy with sectioning of the portal ring.

The surgical approach described here, although an invasive surgery that requires a skilled surgeon and an adequate infrastructure including professional anesthesiology, is feasible.13 A potential application of this surgical approach is the evaluation of ischemia-reperfusion injuries and improvement of pancreas preservation by hypothermic pulsatile machine perfusion.

As shown in our experimental porcine model, diabetes induction by total pancreatectomy and pancreatic allotransplant after total pancreatectomy are feasible and effective. The development of these models offers the potential for new investigations into ischemia-reperfusion injuries, improvement of pancreas procurement, and preservation techniques. 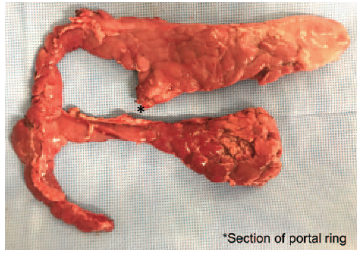 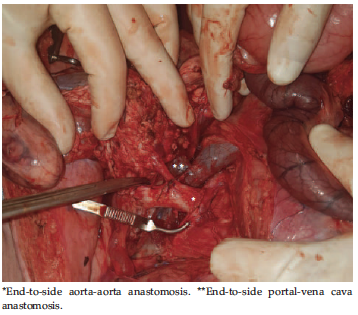 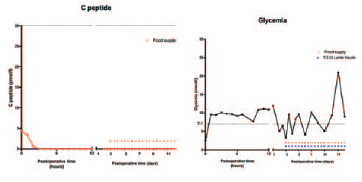