Objectives: Liver replacement continues to be the only definitive mode of therapy for children with end-stage liver disease. However, it remains challenging because of the rare donor organs, complex surgical demands, and the necessity to prevent long-term complications. Our objectives were to analyze 16 years of experience in the Shiraz University Organ Transplant Center.

Materials and Methods: We retrospectively analyzed the records of 752 patients (< 18 years old) who underwent orthotopic liver transplant at our center over a 16-year period. Mean age was 90 months, and male-to-female ratio was 1.25. Of the 752 transplants, 354 were whole organs, 311 were from living related donors, and 87 were in situ split liver allografts. Patient and graft survival rates were determined at 1, 3, and 5 years, and results between groups were compared.

Results: Overall mortality was 31.8%. The 1-, 3-, and 5-year patient survival rates were 77%, 69%, and 66%, respectively, whereas the respective graft survival rates were 75%, 68%, and 65%. We observed significant differences in survival according to graft type (log-rank test, P < .001). We also observed significant differences in survival probabilities according to age (log-rank test, P < .001). Cox regression was used to simultaneously analyze effects of age and graft type on survival.

Conclusions: Our results were similar to those observed in the literature in terms of indication for transplant and posttransplant survival.

Children have distinct diseases, clinical suscep­tibilities, physiologic responses, and neurocognitive and neurodevelopmental features different from adults. In fact, even within the pediatric age group, differences can be found between newborns, infants, children, and adolescents.

Liver transplant provides a lifesaving treatment option for children with liver disease. Current challenges include identifying those ready for a liver transplant and the optimal timing for listing a patient for transplant. Within a span of 3 decades, pediatric liver transplant has matured as a clinical therapy that is practiced worldwide in numerous medical institutions. This transformation can be traced to a few critical developments, including improvements in immunosuppression, application of technical variant allografts, and selection of potential candidates and organ allocation.

In Iran, the first liver transplant in a child was performed in Namazi Hospital (Shiraz, Iran) in 1999.1 The number of liver transplant procedures has increased in our center to reach 113 pediatric transplants in 2015. Progress in the management of immunosuppressive therapy suitable for children has been of key importance in improving survival after transplant. The use of technical variant allografts has assisted in overcoming the shortage of suitable donors for children, permitted many more children to receive transplants, and reduced wait list mortality. Finally, our understanding of where, when, and how to use transplant therapy in children has improved. For example, for unresectable hepato­blastoma, when the tumor remains unresectable and a potential living donor is available, we now know that donor work-up and orthotopic liver transplant preparation should be initiated by the fourth or fifth cycle of chemotherapy.2 Comorbidities such as hepatopulmonary syndrome and impaired cardiac function, rather than size and age, are now the limiting factors to successful transplant procedures. With improved knowledge of candidate selection, 1-year graft survival after pediatric liver transplant exceeds 90% and the 5-year survival rate is 85%.3,4

Several factors about liver transplant must be considered if it is to be used in a manner that is consistent with the best medical interests of a pediatric patient. First, it must be remembered that it is a high-risk procedure, carrying a significant risk of mortality under the best circumstances. Second, there is potential for chronic disability and requirement for long-term drug administration. Although a long-term, high-quality life is possible, recent studies indicate that children who receive liver transplants have lower health-related quality of life levels than healthy individuals.5 Children who have received liver transplants have reported impairments across both physical and psychologic dimensions and have health-related quality of life levels comparable to children with other chronic health conditions such as cancer in remission or renal transplant.6,7 Liver transplant is indicated for all children with liver disease and progressive deterioration of health, before the appearance of complications that can make the procedure excessively risky. The following are indicators of need for transplant: cholestasis, pruritus, and/or ascites that are untreatable from a clinical point of view, portal hypertension with bleeding from varices that is unresponsive to treatment, multiple episodes of cholangitis or episodes of spontaneous bacterial peritonitis, progressively deficient hepatic synthesis, affected somatic growth, and hepatic encephalopathy.8,9

The study included all patients less than 18 years old who had undergone a first liver transplant at Namazi Hospital (Shiraz, Iran) between January 2000 and January 2016.

All protocols, experimental studies, and clinical trials involving human participants at our institution were approved by our ethics committee before the initiation of study and conformed to the ethical guidelines of the 1975 Helsinki Declaration. Written informed consent was obtained from patients or their guardians before inclusion in the medical records database.

Our cutoff date for data was January 1, 2016, with day of transplant considered day 0 in recipients.

We also determined survival according to type of transplant. In the 354 patients (47.1%) who received whole organ donations, 1- and 5-year survival rates were 88% and 79%, respectively. One- and 5-year survival rates for the 311 patients (41.4%) who received living related-donor liver transplants (partial grafts) were 67% and 58%, respectively. Finally, 1- and 5-year survival rates for the 87 patients (11.6%) who received split graft liver transplants were 65% and 47%, respectively (Table 4 and Figure 4). Mean patient survival for each graft type was 11 years and 6 months for whole organ, 8 years and 10 months for living related donor graft, and 4 years and 9 months for split liver graft (Table 4). Survival results were significantly different among graft types (log-rank test, P < .001).

Liver transplant started in Iran in 1994, and the most common indication for liver transplant in children at our center is biliary atresia. This primary indication is the same as in other pediatric series.10-14 Similar to other published studies, age and weight had the greatest effects on patient survival and survival rates were lowest in patients who were less than 2 years old. In our center, most of the patients who received living donor and split liver grafts were those who were less than 2 years old, and this age group also had the lowest survival rate.

Results in our patient sample are similar to those reported in the literature in terms of indications for transplant and posttransplant survival. Nevertheless, we need to improve our results in terms of reducing the number of complications unrelated to the graft. 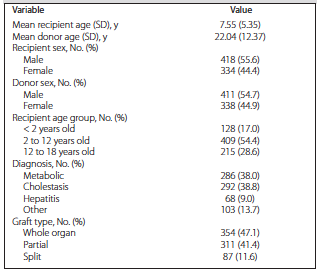 Table 1. Demographic and Clinicopathologic Characteristics of Patients and Donors

Table 5. Survival Probability According to Graft Type for Each Age Group 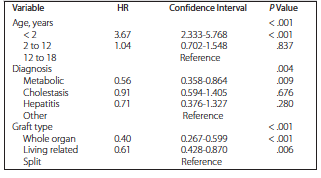 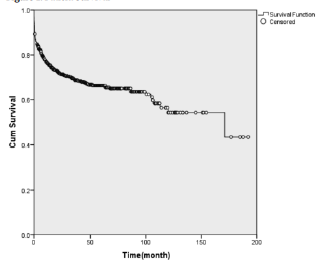 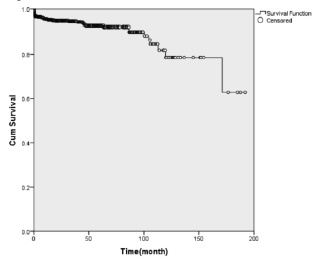 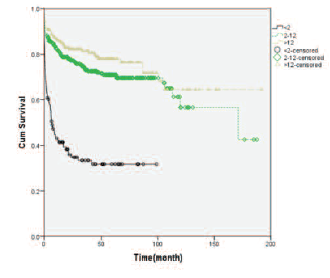 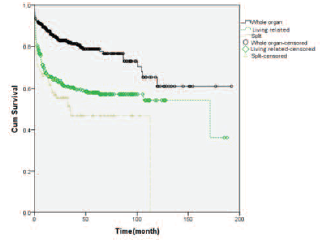