Renal transplant is the preferred choice of treatment for end-stage renal diseases. To avoid rejection, increasingly potent immunosuppressants are adminis­tered to recipients of kidney transplants. Com­plications, when there is excess immunosuppression, include possible lethal infections, which reduce allograft survival and compromise patient survival. When there is insufficient immunosuppression, rejections could impair allograft outcomes. Moreover, recurrent primary diseases could also threaten allograft outcomes. Here, we report a case of a patient who underwent ABO-incompatible and living-related renal transplant in which the patient experienced 7 acute kidney injury episodes, including recurrent malignant hypertension, rejection, and infections. After the patient underwent 4 months of hemodialysis (with serum creatinine level of 17 mg/dL), which was later terminated, no adverse effects were found for 1 year (serum creatinine level of 3.7 mg/dL). Therefore, renal function recovery may be longer in patients with renovascular diseases with hypertension. For recipients undergoing hemodialysis with allograft failure, we suggest that the treatment should be not completely withdrawn of immunosuppressants so that acute kidney injuries are minimized. Even after prolonged hemodialysis (eg, for 4 months), recipients may still be able to recover renal function.

Our 34-year-old male patient first experienced ESRD 4 years previously. The patient was admitted to our hospital due to an initial complaint of poor appetite lasting for 2 weeks. Although his baseline serum creatinine (SCr) level was 7 mg/dL, he stated no related complications before admission. At the hospital, his SCr level was 22 mg/dL, prompting immediate hemodialysis. Renal biopsy disclosed malignant arterionephrosclerosis with advanced interstitial fibrosis/tubular atrophy. A retinal examination revealed cotton wool spot and microaneurysms. He was maintained on regular hemodialysis due to malignant hypertension. However, the cause of malignant hypertension was not clear, as findings were normal regarding thyroid function, and his serum levels were also normal for cortisol, catecholamine, renin, and aldosterone levels. A magnetic resonance angiogram of the abdomen showed unremarkable results.

After a course of 10 months of hemodialysis, he was scheduled for ABO-incompatible renal trans­plant. After plasmapheresis and anti-CD20, the anti-A antibody titer with reference to his wife was 1:64, both initially and immediately before renal transplant. Human leukocyte antigen tests showed 6 mismatches, and the complement-dependent cytotoxicity cross­matches were negative for both B and T cells. After ABO-incompatible renal transplant, which was performed in accordance with a standard protocol, and anti-CD20 and plasmapheresis treatment, his renal function recovered well (SCr of 1.1 mg/dL at 1 month posttransplant). However, he experienced 7 acute kidney injury (AKI) episodes within a 4-year follow-up posttransplant until the time of this report (Figure 1 and Table 1). A body weight discrepancy between the donor and recipient was not prominent (50 kg vs 70 kg).

Six months after renal transplant, the patient presented with a mass over his right axilla, and an abscess of 12 cm was noticed. An oxacillin-resistant Staphylococcus aureus infection was confirmed pathologically. The infection was treated with vancomycin and debridement. However, due to tapering of immunosuppressants, he developed gross hematuria and elevated serum creatinine levels (SCr increased from 0.99 to 4.32 mg/dL). Renal biopsy revealed acute antibody-mediated rejection. We administered 500 mg of methylprednisolone for 5 days, 25 mg of antithymocyte globulin for 3 days, and 5 treatments of plasmapheresis. The patient showed recovery of renal function (SCr decreased from 4.32 to 1.02 mg/dL) and continued to be in relatively good condition during the following year.

Eighteen months after renal transplant, he developed AKI (SCr from 1.31 to 1.52 mg/dL) due to cell-mediated rejection (Banff type IA) and de novo focal segmental glomerulosclerosis (FSGS). The patient received pulse therapy of 500 mg of methyl­prednisolone for 3 days and 30 mg of antithymocyte globulin for 3 days, with renal function once again recovering (SCr decreased from 1.52 to 1.18 mg/dL). The presence of FSGS may have been due to secondary hyperfiltration. The patient also had marked weight gain (from 70 to 100 kg). However, 2 months later, AKI occurred again (SCr increased from 1.25 to 3.23 mg/dL) due to acute cellular-mediated rejection (Banff type IA), collapsing FSGS, accelerated arterionephrosclerosis, and mild chronic active interstitial fibrosis/tubular atrophy. For cell-mediated rejection, the patient received pulse therapy with 500 mg of methylprednisolone for 3 days and plasmapheresis for suspected collapsing FSGS and intensive blood pressure control for recurrent malignant hypertension.

Renal function again became partially stabilized (SCr decreased from 3.23 to 2.79 mg/dL). Because of oversuppression of his immune system, he developed infectious diarrhea with shock and urosepsis, with septic shock occurring twice after renal transplant (at 24 and 26 months posttransplant). The patient returned to regular hemodialysis for 4 months (SCr of 17.4 mg/dL). Low-dose immunosuppressants were administered (5 mg of prednisolone, 2 mg of tacrolimus every 12 h, and 180 mg of mycophenolic acid twice daily). We withheld the 4-month hemodialysis course at 30 months posttransplant, and the patient subsequently showed relatively good renal function (SCr level of 3.70 mg/dL) for another year.

In summary, the patient had recurrent infections and rejections together with recurrence of primary disease (malignant hypertension). We continued to allow allograft recovery, with renal function partially recovering even after hemodialysis for 4 months.

In native kidneys, malignant hypertension is frequently complicated with renal dysfunction, despite it being a relatively uncommon cause of ESRD with high variations.3 About 18% to 40% of such patients will need renal replacement therapy in the future.3 The major predictors of renal outcomes are the initial renal function and level of blood pressure control. Recurrence of malignant hyper­tension in kidney transplant recipients is rare, and only 2 cases have been reported in a 400-patient cohort study of malignant hypertension-related ESRD.1 This rarity highlights the importance of the present case report.

Over the past 20 years, survival of the renal allograft has improved markedly, especially in the short term after renal transplant. However, in our patient and overall, short-term outcomes can be poor due to the following factors. First, our patient had increased risk because of incompatibility of ABO blood type and 6 mismatches of HLAs. Thus, we selected to use relatively high doses of immuno­suppressants for this recipient. As a result, the patient became easily infected (3 infections) and developed 5 rejections. These factors can strongly threaten renal outcomes. Second, posttransplant hypertension may not be controlled well because of nonadherence. In a multivariate analysis, Mange and associates reported that the relative risk of allograft failure is 1.3 for each 10 mm Hg increment in the mean arterial pressure measured 1 year after renal transplant.4 According to this risk estimation, our patient would have experienced a 5.2-fold relative increased risk as his blood pressure was 40 mm Hg higher than normal. This factor was important for our patient who had primary disease of ESRD with malignant hyper­tension. Third, our patient experienced large changes in body weight, which became worse by the end of 1 year posttransplant (70 vs 50 kg and 100 vs 50 kg). Finally, donor noncompliance can also threaten allograft outcomes.5

Renal function recovery (RFR) can be defined as the discontinuation of dialysis after 3 months of renal replacement therapy.6 The rate of RFR is considered to be less than 1%.2 From a large-scale review study reported in 2014,2 RFR appears to be more frequent in elderly patients with renovascular disease together with hypertension. Once blood pressure is stabilized, RFR can still be anticipated compared with that shown for other causes related to ESRD.2,7-9 This may be due to the delayed recovery of renal function in ischemic nephropathy secondary to renovascular disease.8,9 Patients with malignant hypertension also have ischemic nephropathy and hence have a higher chance of RFR. In renal transplant, RFR has not been reported in recipients who have received prolonged hemodialysis (eg, for 4 month, like in our case). However, RFR shown in our patient was related to aggressive treatment of infection to reverse prerenal AKI, to stabilize blood pressure against recurrent malignant hypertension, to reduce body weight reduction, to avoid hyperfiltrative FSGS, and to maintain a low level of immunosuppression. The withdrawal of immunosuppression after allograft failure was aimed to lower the risk of infection and malignancy and to minimize complications with steroids.10 However, immunosuppression withdraw­al can also lead to complications, including the precipitation of rejection possibly requiring neph­rectomy, secondary adrenal insufficiency, adverse immunologic effects among those pursuing a second transplant, and loss of residual renal function or change of RFR.10 For recipients with possible RFR, we suggest low doses of immunosuppressants together with not easily giving up on the patient having allograft recovery.

Careful titration of immunosuppressants to maintain a good balance between rejection and infection is crucial for patients after renal transplant. Patients with recurrent malignant hypertension may have a higher possibility of RFR. Aggressively reversing any cause of AKI and keeping low doses of immuno­suppressants may help return allograft function, even after several months of hemodialysis. 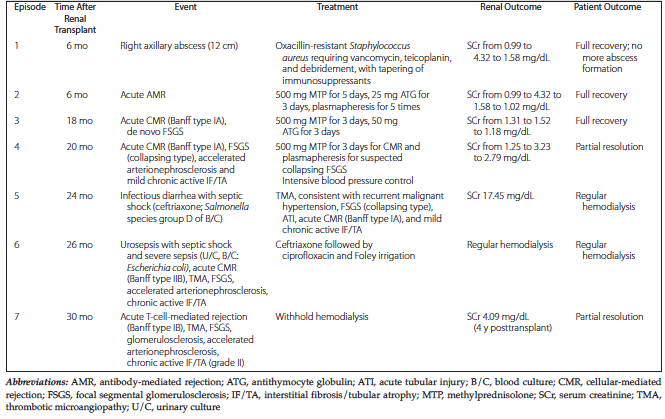 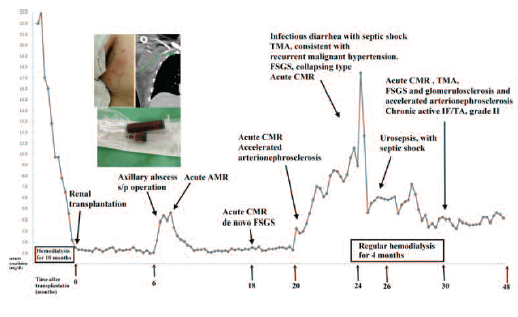