The term isolated v-lesion was proposed at the 10th Banff Conference (2009) and defined as endarteritis with minimal tubulitis and interstitial inflammation (both ≤ 1). At the 11th Banff Conference in 2011, the term isolated v1-lesion was defined as mild endarteritis caused by 3 different factors, including antibody-mediated rejection, acute cellular rejection, and endarterial changes due to ischemia and other conditions. Here, we report a case of an isolated v-lesion found at posttransplant biopsy in an ABO-incompatible kidney transplant recipient who received rituximab for desensitization purposes before transplant. The patient was successfully treated with steroid pulse therapy and gusperimus hydrochloride administration. Gusperimus hydrochloride is an immunosuppressive drug that is licensed in Japan for the treatment of kidney transplant rejection. To our knowledge, this is the first report of an isolated v-lesion in an ABO-incompatible kidney transplant recipient who had been administered rituximab.

The recipient was a 69-year-old female patient who had been on hemodialysis since 2014 for end-stage renal failure due to type 2 diabetes mellitus. After being on hemodialysis for 10 months, she underwent living-donor kidney transplant with her husband as the donor. The donor was a 69-year-old male with type AB Rh-positive phenotype, whereas the recipient was type B Rh-positive phenotype, making them ABO incompatible. The patient had 3/6 HLA mismatches by histocompatibility testing, was negative by lymphocyte cytotoxicity testing and flow cytometry crossmatch, and was class I-positive (4.3%) by flow panel reactive antibody testing but had non-donor-specific antibody. The pretransplant anti-A/B immunoglobulin Ig G and IgM antibody titers were both at 16× levels. The patient received our immuno-suppressive protocol, which was rituximab without splenectomy (rituximab, cyclosporine, mycophenolate mofetil, methylprednisolone, basiliximab).1 A single dose of rituximab (150 mg/m2) was administered 14 days before transplant, and double filtration plasmapheresis was performed twice and plasma exchange once for antibody removal. Anti-A/B IgG and IgM antibody titers both decreased to undetectable levels.

Diuresis began soon after transplant, but the patient demonstrated poor graft function (serum creatinine levels improved only from 8.6 to 2.5 mg/dL) even after 1 week. Therefore, a renal biopsy was conducted on posttransplant day 8. Pathologic examination showed no tubulitis or prominent interstitial infiltration by hematoxylin and eosin staining (Figure 1). However, neutrophil and lymphocyte infiltration in the internal elastic lamina of the arcuate artery was shown by Masson trichrome staining (Figure 2). No significant deposition in the peritubular capillaries was demonstrated by C4d staining (not shown). The patient was therefore diagnosed as having an isolated v-lesion (t0, i0, g0, v1, ptc0, C4d0).

In combination with the clinical observations, a diagnosis of acute rejection was made, and the patient was treated with steroid pulse therapy (500 mg/d) for 3 days and gusperimus hydrochloride (5 mg/kg/d) for 7 days. Renal function improved (serum creatinine level of 1.2 mg/dL), and renal biopsy at posttransplant day 40 (not shown) revealed no endarteritis or any other significant findings (t0, i0, g0, v0, ptc0, C4d0). At 8 months after transplant, her renal function has remained favorable (serum creatinine level of 1.2 mg/dL).

An isolated v-lesion is defined as endarteritis with minimal tubulitis and interstitial inflammation (both ≤ 1). It is thought to be caused by 3 different factors, including antibody-mediated rejection, acute cellular rejection, and endarterial changes due to ischemia and other conditions. To our knowledge, this is the first reported case of an isolated v-lesion in an ABO-incompatible kidney transplant recipient administered rituximab.

Our case involved a living-donor kidney trans-plant between 2 elderly patients, and they were presumed to have decreased immunity. Furthermore, because it was an ABO-incompatible kidney trans-plant, powerful immunosuppressive treatments, including plasma exchange as desensitization and pretransplant administration of rituximab and mycophenolate mofetil, were administered. Previous reports have shown that the frequency of acute rejection is low in patients who receive rituximab.6 In the present report, we revealed that acute rejection presenting as isolated v-lesion can occur in these patients. To make a diagnosis of isolated v-lesion, the artery needs to be contained in the biopsy tissue. If not, the diagnosis of isolated v-lesion can be missed. Even if rejection is not detected by renal biopsy in patients with decreased graft function, it might be better to do another biopsy in case the artery is not contained in the biopsy tissue, so as not to rule out the possibility of isolated v-lesion. 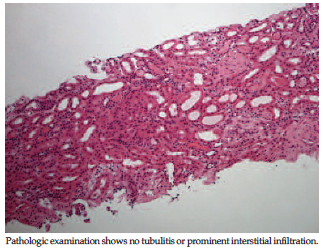