Objectives: Awareness regarding organ donation has been steadily growing in the Arab world yet is still far from the current demand. A thorough analysis of population behavior toward organ donation can improve organ transplant education. Therefore, we designed this study to assess the knowledge, attitude, donation desires, and views on organ donation among adults in Arab countries.
Materials and Methods: An observational cross-sectional study approach was used by assessing 1004 adult survey respondents from 22 Arab countries through the snowball sampling technique via social media platforms and emails. A fact sheet was used to collect demographic information, which was followed by a predesigned questionnaire to assess the attitude and willingness of participants toward solid-organ donation.
Results: Results showed that only 17.0% of respondents had willingness to donate in the future, and only 2.0% respondents were already organ donors or registered as organ donors. Respondents indicated that the most acceptable organs to be donated after death were kidneys (57.8%), followed by liver (45.1%) and heart (42.3%). Regarding the type of surgery for living donation, 48.1% of the respondents had no surgery type preference, whereas 12.9% would only agree to laparoscopic intervention. A significant difference (P < .001) was noted among respondents with transplant experience and without experience regarding organ donation willingness. In terms of paired exchange and list exchange donation, 18.0% indicated that they would refuse to donate, 23.0% would accept, and 19.0% would accept if no alternative was available.
Conclusions: This study highlighted the psychology of the Arab world and factors influencing decisions toward solid-organ donation and transplant. The biggest factor for unwillingness to donate organs was posttransplant health-related risks; almost 50% of respondents were afraid of health complications. A need for awareness and education regarding the importance of organ donation and transplant emerged as common themes in this study.

Advancements in surgical procedures and immune therapies have enhanced patient quality of life and patient survival.1 Organ donation and transplant are important medico-legal procedures in which a donor willingly consents to organ procurement while alive (living donation) or after death (deceased donation), with the organ then transplanted surgically to the recipient.2,3 According to the literature, kidneys are the most frequently transplanted organ worldwide, followed by the heart, lungs, liver, bone marrow, and cornea.2-4 Organ transplant, a part of saving multiple lives, is considered to be the most important treatment option for patients with end-stage diseases and organ failure.4 The demand for organ transplant continues to increase, and the gap between demand and supply of organs available and the number of patients waiting for a transplant continues to widen globally.5,6 In the United States, the number of patients on transplant wait lists in 2018 was over 113 000.4 In Germany, the number of donors has decreased one-third in the past decade, resulting in a more than 30% decline in organs retrieved in 2017.7

God’s revelation (that is, preservation of life and progeny) also encourages life-saving medical advancements.8 Eight themes have emerged as strong influencers for an individual’s willingness to donate organs: (1) relational ties; (2) religious beliefs; (3) cultural influences; (4) family influences; (5) body integrity; (6) previous interactions with the health care system or medical mistrust, the validity of brain death, and fear of early organ retrieval;(7) the individual’s knowledge of the organ donation process; and (8) major reservations to the process of donation.9 Ischemia-reperfusion injury is a major complication that results in organ rejection and is a common concern in the donor community.10

Much of the Arab world has unclear knowledge of organ transplant protocols, believing in myths and ambiguous narrations. This is also shown in non-Arab countries, in which only 32.1% of public respondents in India were aware of organ donation. The study also reported that 19.5% of respondents in the general population and 44.9% of health care professionals were willing to donate their organs for anatomic education.11 In a study from Ohio in the United States, the mean rate of knowledge of organ donation was 86%.12 In contrast, a study conducted in Puducherry, India showed that only 57% of the participants had adequate knowledge of organ donation.13 Another community-based study from Karachi, Pakistan reported that only 8.4% of the population were willing to donate irrespective of circumstances.14 The most reported barriers in underdeveloped countries are a lack of awareness of donation protocols and concerns of subsequent health complications.15 Some studies found that organ donation was not popular in Arab countries because of the poor transplant centers, cultural and religious factors, and lack of efforts to raise awareness.16,17 In contrast, in a study of developed countries, public awareness efforts from 2010 to 2015 led to an increase of 13.9% in willingness to donate.7


A predesigned questionnaire with English and Arabic versions were used for data collection. The evaluation parameters were taken from Al-Bukhari21 and online resources (Medline, Embase, Scopus, and Google Scholar database). A fact sheet was used to collect demographic and general information, followed by a questionnaire section that assessed the attitude, willingness, and perceptions of participants in general and in specific circumstances on donation/acceptance of solid-organ transplant.

Ethical consideration
Electronic written consent forms were duly provided and explained thoroughly to respondents before the data collection. Ethical approval was obtained from the Research Ethics Committee, Menofia University, Egypt. All research procedures on humans (individuals, samples, or data) were performed in accordance with the principles stated in the Declaration of Helsinki.9,18,22

Statistical analyses
Data were compiled and analyzed via computer-based statistical software (SPSS version 27), with 5% probability. Descriptive statistical tools were used for the sociodemographic information. Pearson chi-square test was used to investigate the differences between groups. The Cramer V test was used to calculate the effect size of the reported relationships.

Among the respondents, 17.0% indicated willingness to donate in the future, and 2.0% were already organ donors. Almost two-thirds of the respondents indicated willingness to donate if a close relation needed a transplant, and 20.1% were not willing to donate. Only 16.2% of respondents indicated that families supported a donor’s decision and 25.4% indicated that the individual self-dependently makes the decision for organ donation, regardless of their families’ opinion. In terms of organ donation denial, health-related concerns were the biggest hesitation

Around 50.0% of respondents had concerns on postdonation complications, and 30.0% were afraid of organ failure. Nearly 90% were unwilling to donate for money (Table 2).

Regarding the type of surgery for living donations, 48.1% of the respondents did not have a surgery preference, but 12.9% only would accept laparoscopic intervention. In terms of paired exchange and list exchange donations, 18.0% would not donate for these interventions, but 23.0% would and 19.0% would if there was no alternative donor (Table 3).

Organ donation is an important medico-legal intervention. Over 80.0% of adult participants in our study indicated concerns with regard to health after donation (eg, organ failure and complications). This trend has been shown in Arab and in some non-Arab countries that people are afraid of medical interventions due to associated risks.23 Adult respondents from Arab countries had a higher willingness to donate if the person in need was a relative or a family member (86%). This trend was in line with that reported by AlHabeeb and colleagues, in which 81.2% of participants were willing to donate their organs to close relatives.24 With regard to the acceptance of solid-organ donation regardless of the relationship to the recipient, both our study (79.9%) and the study from AlHabeeb and colleagues24 (91.5%) showed higher willingness to donate compared with non-Arab countries like Australia (58.0%) and Ethiopia (58.1%).23,25 Most of the respondents in our study were Muslims, which reflects the actual population in the Arab world as described by statistics of the Pew Research Center.26 Religious beliefs were not a significant factor for unwillingness to donate in our study. Other studies have reported rates of unwillingness to donate organs that ranged from 42.0% to 50.3% among Muslims because of religious beliefs.24,27

Although paid donation is strongly prohibited in Islam,28 organ donation is highly recommended in many situations based on the principle of altruism whenever it causes no harm and life-threatening conditions.22 Among our Arab participants, 90.0% were reluctant to receive money for donation. Lack of information on organ donation, mistrust of the health care system, family attitudes, sanctity of the body, lack of clear understanding of religious rules, and religious leaders’ viewpoints were among the key issues or concerns regarding organ donation. Collaboration with religious leaders to address these issues can assist in filling this knowledge gap by developing good views and awareness on organ donation and transplant. Other religions have also emphasized organ donation for the sake of love, charity, and the survival of humanity.29

Those who experienced organ transplant previously or knew someone who had were significantly more likely to accept a donation and accept getting paid for it compared with those who did not go through such an experience. This may be attributed to their empathy for the transplant recipient and appreciation of the transplant process. In contrast, a study from Agrawal and colleagues reported that 61.6% of the participants felt donors deserved financial support regardless of the past transplant experience.27 Considering family sove-reignty as one of the overriding factors in influencing one’s own decision, our study showed that 16.2% of the respondents were reluctant because of family objection. In the Arab countries, the family has prime importance and satisfying parents is an honor. Hence, a great number of decisions of potential donors have been overridden by their families.30,31

Regarding the mode of donation, 17.0% of respondents showed a willingness to donate only after death. In a study from El-Shoubaki and colleagues, 56.0% of participants restricted their willingness to donate to after-death organ donation.13 Acceptance of paired donation and the list-exchange donation among our respondents was less than that shown in a Saudi population reported by Al-Bukhari.21

To our knowledge, our study is the first in terms of assessing willingness toward solid-organ donation in the Arab world. This study can be an excellent basis for future researchers and health agencies to strategize ways to raise acceptance of organ donation.

This study aimed to show the attitude and psychology among Arab adults world about organ donation. A small portion of respondents exhibited a willingness to donate their organs; however, follow-up health concerns were noted as the major reason for donation denial. The most accepted organs for transplant were kidneys, heart, and liver. A past experience with organ transplant was noted as a significant decisional factor for organ donation willingness. However, monthly income and past charity works had no effect in this regard.

From the 1King Hamad University Hospital, Kingdom of Bahrain; the 2College of Medicine and Medical Sciences, Alexandria University, Egypt; the 3College of Medicine and Medical Sciences, Arabian Gulf University; the 4Zhejiang University School of Medicine; the 5Psychology Department, College of Education, Sultan Qaboos University, Oman; the 6Menofia University, Shebin El-Kom, Egypt; the 7Department of Psychiatry “Ibn Omrane”, Razi Hospital, Manouba, Tunisia; the 8Tunis El Manar University, Faculty of Medicine of Tunis, Tunis, Tunisia; and the 9Ministry of Health, Manama, Kingdom of Bahrain
Acknowledgements: The authors have not received any funding or grants in support of the presented research or for the preparation of this work and have no declarations of potential conflicts of interest.
Corresponding author: Ahmed Khaled Alanzi, King Hamad University Hospital, Building 2435,Road 2835, Block 228,P.O Box 24343, Busaiteen, Kingdom of Bahrain
Phone: +973 36431942
E-mail: Ahmed.alanzi@khuh.org.bh 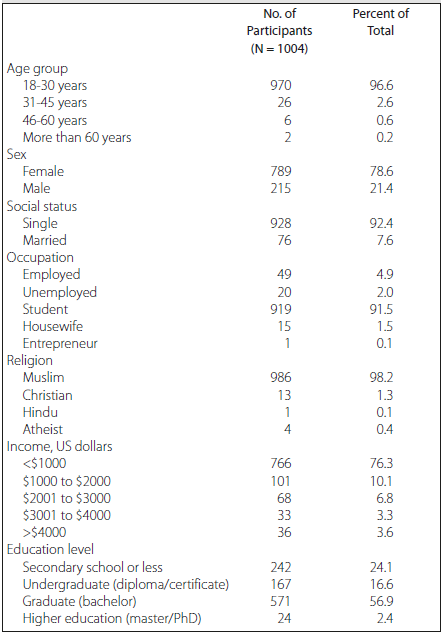 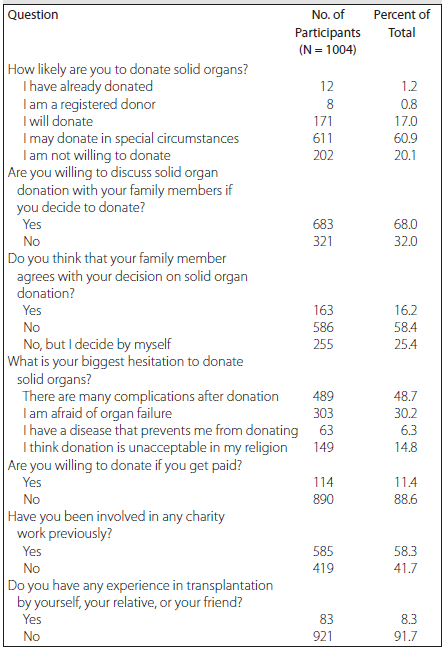 Table 2. Attitude and Experience of the Study Participants (Citizens of Arab Countries) Toward Solid-Organ Donation 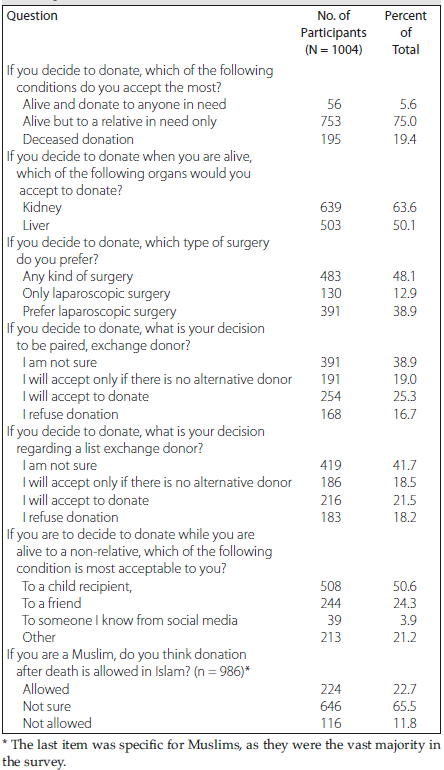 Table 3. Willingness of Arab Population in the Study to Donate Solid Organs and in Specific Circumferences 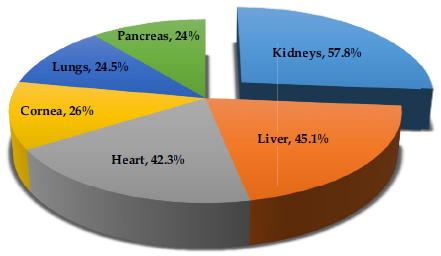 Figure 1. Percentage of Most Acceptable Organs to be Donated After Death Among Study Participants 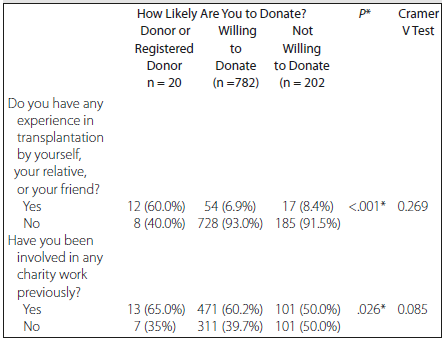