Lymphatic leakage is a common and well-described complication after kidney transplantation, occurring in up to 25% of patients. Accumulation of lymph is due to the surgical disruption of recipient lymphatic channels accompanying the external iliac vessels, complicated by lower extremity edema, wound breakdown, infection, and, if unresolved, graft loss due to extrinsic compression. In this report, we describe the novel use of diagnostic and therapeutic lymphangiography to successfully treat lymphatic leak after renal transplant that was resistant to drain placement, sclerotherapy, and laparoscopic peritoneal window creation. We also describe the methodology, indications, and contraindications and conclude that this technique is well-tolerated and offers a good option for complex lymph leaks that do not respond to conventional treatment. Further studies are required to compare its efficacy with other standard methods, including sclerotherapy and laparoscopic peritoneal fenestration, as the primary treatment modality.

Lymphatic leakage is a common and well-described complication after kidney transplantation, occurring in up to 25% of patients.1 Accumulation of lymph is due to the surgical disruption of recipient lymphatic channels accompanying the external iliac vessels, complicated by lower extremity edema, wound breakdown, infection, and, if unresolved, graft loss due to extrinsic compression. Standard management involves observation, if found incidentally, with aspiration or drain placement utilized as first-line treatment if the lymphatic collection is large or compressing the graft kidney. In most cases, drainage of lymphatic fluid resolves spontaneously. In the setting of ongoing lymphatic leakage, sclerotherapy can be performed or a peritoneal window can be created. Laparoscopic creation of a peritoneal window, which allows the lymphatic fluid to drain into the peritoneal cavity where it can be absorbed, has the lowest recurrence rate at 8% to 16% in a systematic review.1 However, it is uncertain how to treat persistent lymphatic leakage despite standard management. In this report, we describe the novel use of diagnostic and therapeutic lymphangiography to successfully treat lymphatic leak after renal transplant that was resistant to drain placement, sclerotherapy, and laparoscopic peritoneal window creation.

A 77-year-old man with chronic kidney disease due to focal segmental glomerulosclerosis underwent an unrelated living donor kidney transplant from his spouse in a standard fashion with suture ligation and division of the lymphatics overlying the iliac artery. A 10F flat surgical drain was placed in the extraperitoneal space adjacent to the ureteroneocystostomy, as is standard for our practice. Within the first few days postoperatively, the drain put out 200 to 400 mL per day of serosanguinous fluid, and he developed lower extremity edema, most significantly in the ipsilateral leg. Fluid analysis excluded a urine leak and confirmed a lymphatic leak. He was discharged home, and his drain was removed as an outpatient once the drainage decreased to less than 50 mL per day.

Over the second month posttransplant, his drain output was 300 mL per day, and he was admitted for laparoscopic creation of a peritoneal window. Under direct visualization, methylene blue was injected through the drain into the lymphocele cavity, demonstrating the retroperitoneal collection. The colon was medialized, and the retroperitoneum was opened, with a wide communication between the lymphocele and the peritoneal cavities. The drain was again flushed with methylene blue to demonstrate free drainage into the peritoneum.

Throughout the third month posttransplant, his drain output had not significantly improved after peritoneal window creation, and he was admitted for a drain study and sclerotherapy. The drain was checked under fluoroscopy, which demonstrated the pigtail catheter in place within a small fluid cavity. Povidone iodine (4 mL) was injected into the drain, which was then clamped for 1 hour, before placement to gravity suction. The patient continued to have persistent high-volume lymphatic drainage 1 week after sclerotherapy.

He then underwent diagnostic and therapeutic lymphangiography. A 25-gauge needle was advanced into a normal-sized ipsilateral inguinal lymph node under ultrasonographic guidance (Figure 1A), and Lipiodol (Guerbet LLC, Princeton, NJ, USA) was injected in small aliquots. With serial fluoroscopic spot images, the radiopaque Lipiodol was demonstrated to course from the injected lymph node up the external iliac lymphatic plexus before extravasating from a disrupted channel adjacent to the drain, thereby confirming the lymphatic leak (Figure 1B). Lipiodol, which has an oily appearance, was also confirmed visually with aspiration of the drain. A total of 10 mL of Lipiodol was administered. The procedure was well-tolerated by the patient, and the drain output significantly improved immediately after the procedure and stopped completely after 2 days. Six days after the procedure, ultrasonography demonstrated no persistent fluid collection, and the drain was removed.

Lymphangiography has been used in the diagnosis of lymphoceles, with a water-soluble contrast agent infused to visualize the disrupted lymphatic channels, and as a therapeutic intervention with glue embo­lization or sclerosis with povidone iodine or 95% ethanol. Originally developed in 1901, Lipiodol is a mixture of iodine and poppy seed oil-derived fatty acids and was used as the first iodinated contrast agent. Its use in the sclerosing of postoperative lymphatic leakage has been described as the primary management in a small cohort of 3 patients after kidney transplant in Korea with promising results2; however, it has yet to be described in complex or resistant lymphoceles. Our proposed standard methodology, including indications and contrain­dications, is shown in Table 1.

The mechanism by which Lipiodol improves lymphatic leakage has been thought to involve a local inflammatory and granulomatous process that obstructs the lymphatic outflow, combined with mechanical occlusion due to Lipiodol’s high viscosity.3 If successful, the drainage decreases immediately postprocedure3 and completely resolves within 2 weeks.2 Standard complications of lymphangiography include contrast allergy, access site hematoma, or infection. Lipiodol injection can cause cardiovascular or pulmonary complications, the most frequent of which is pulmonary oil embolism, which can be mitigated by infusing less than 20 mL of Lipiodol.4 Lymphangiogram would only be effective for a lymphatic leak; sclerosis is ineffective due to the lack of a true epithelial lining. Other causes of perinephric fluid collections, including seroma or urine leak, should be evaluated and ruled-out prior to proceeding with a lymphangiogram. Limitations to this technique include having an inadequate lymph node for nodal access, Lipiodol extravasation from the lymph node into the venous system, and a lymphatic leak originating from the renal graft, which would not be visualized with an injection of recipient lymph node.

Our novel use of lymphangiography with Lipiodol was effective in the treatment of a persistent lymphocele after kidney transplant. This technique was well-tolerated and offered a good option for a complex lymph leak that did not respond to conventional treatment. Further studies are required to compare its efficacy with other standard methods, including sclerotherapy and laparoscopic peritoneal fenestration, as the primary treatment modality. 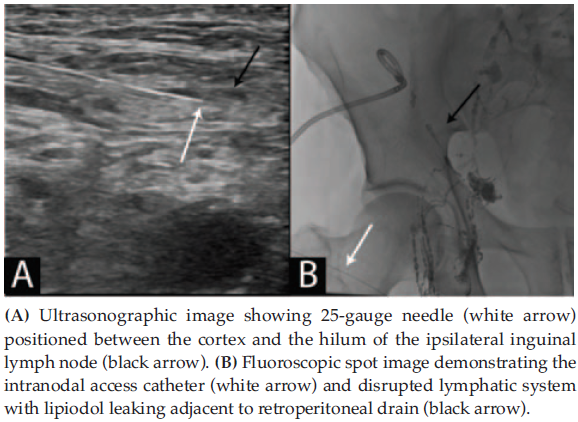