Viral infections, especially from the Herpesviridae family, are associated with high morbidity and mortality in immunocompromised patients. Since the first successful organ transplant in 1954,1 herpesviruses have emerged as the putative opportunistic infection in different types of solid-organ transplants.

After primary infection, both cytomegalovirus (CMV) and Epstein-Barr virus (EBV), as members of the Herpesviridae family, may remain latent with intermittent periods of reactivation that may vary according to the host immune status. The incidence rates of CMV and EBV infection vary widely among solid-organ transplant recipients, from 14% to 82% for CMV2,3 and from 42% to 61% for EBV,4,5 and primary infection with CMV or/and EBV may cause various subclinical infections, graft rejection, and even death.6 Also, CMV is associated with enhanced replication of other viral agents, such as EBV. Cytomegalovirus can directly and/or indirectly accelerate EBV replication and thereby lead to B-cell proliferation and posttransplant lymphoproliferative disorder (PTLD) in solid-organ transplant recipients.7

Posttransplant lymphoproliferative disorder is a heterogeneous disease ranging from indolent reactive hyperplasia to high-grade lymphoma, and the incidence of PTLD varies between 1% and 20%, according to type of organ, degree of immunosup-pression, viral infection, recipient/donor EBV serostatus, ethnicity, and genetic variation of the host.5,8 Although the causal relationship between EBV and PTLD has been proved, limited data are available on the role of CMV infection.9 Some studies have demonstrated that a high viral load of EBV DNA may be a harbinger of PTLD, but there are few data on the role of CMV viral load.4,5 Therefore, this study examined the correlation of CMV and EBV viral loads with PTLD progression.

Another purpose of this study was to determine the overall incidence of EBV infection, CMV infection, and EBV-CMV coinfection in Iranian solid-organ transplant recipients as well as the association with incidence of PTLD.

We analyzed the results from April 2018 to March 2019 of quantitative EBV and CMV tests recorded from 143 solid-organ transplant recipients who were clinically suspected for CMV and/or EBV infection.

The age range of the participants was 1 to 67 years. The patients had received liver (n = 121), kidney (n = 16), or bone marrow (n =3) transplant or dual liver-kidney transplant (n = 2). The main reason for exclusion from the study was no suspicion of infection.

The focus of this study was on PTLD cases in patients with CMV-EBV coinfection versus patients with CMV or EBV monoinfection, with special focus on the effect of the viral load on each group of patients, as well as the underlying diseases and rates of mortality and morbidity.

Cytomegalovirus and Epstein-Barr virus load monitoring
The sera samples from the patients referred to the Prof. Alborzi Clinical Microbiology Research Center, which is affiliated with Shiraz University of Medical Sciences, were assessed by TaqMan real-time polymerase chain reaction (PCR) assay for monitoring CMV and EBV infections.

The suspected samples had been stored at -70 °C until the viral DNA extraction process. Viral nucleic acid was isolated from 200 μL serum, according to the manufacturer’s instructions (Roche). In each serum sample, CMV and EBV genome loads were evaluated by TaqMan real-time PCR assay, as described previously.10 The detection limit of each CMV and EBV quantitative PCR assay test was 10 copies/mL sera.

Posttransplant lymphoproliferative disorder diagnosis
World Health Organization criteria and details from medical records showed that 9 patients were affected by PTLD malignancy. At the time of PTLD presentation, computed tomography is the primary choice for the diagnosis of PTLD. Tissues from all affected patients were histopathologically examined by an expert pathologist (BG) for final disease confirmation. It is noteworthy that most transplant donors in this study were brain dead.

Statistical analyses
The data were analyzed using SPSS for Windows (version 16.0). The most important statistical tests used in this study were the t test, the chi-square test, and the Mann-Whitney test.

We assessed 143 transplant recipients of various organ types who were suspected for CMV-EBV coinfection at least once (1-9 times) during 1.5 years after organ transplant. There were 81 male patients (56.6%) and 62 female patients (43.3%). The patient population consisted of pediatric and adult recipients, with an age range of 1 to 67 years and a mean age of 11.82 years (SD, 11.92 years) (Table 1). There was 1 patient for whom we did not obtain/record any age data.

Epstein-Barr virus infection was the most common infection (n = 52, of whom 18 were coinfected with CMV). There was no statistically significant correlation of age with CMV infection or with CMV-EBV coinfection (P ≥ .05); however, there was a significant relationship between EBV infection and age (P ≤ .05).

The prevalence of CMV infection, EBV infection, and CMV-EBV coinfection for each type of transplant is shown in Table 3.

Lymph node biopsy was the primary method of PTLD diagnosis in 9 transplant recipients included in this study; in addition, 8 of the 9 patients experienced CMV infection simultaneous with EBV infection. Statistical analyses revealed a significant correlation between CMV-EBV coinfection and PTLD incidence (P ≤ .05), whereas 1 of 134 patients who were not coinfected with CMV-EBV experienced at least 1 type of PTLD disorder, but this result was not statistically significant (P ≥ .05).

The maximum EBV viral loads were higher than the CMV genome load in the patients with PTLD. Notably, there was a significant correlation between CMV and EBV maximum viral load and the occurrence of PTLD ( Figure 1, Table 4). In patients with PTLD, the CMV-EBV coinfection occurred before PTLD development, except for a single case ( Table 4).

The CMV and EBV are respective members of the Betaherpesvirinae and Gammaherpesvirinae subfa-milies of Herpesviridae in the order Herpesvirales and cause opportunistic viral infections in immuno-compromised patients such as transplant recipients.

In response to CMV and EBV primary, coprimary, or secondary infections, there are substantial defensive responses in patients without transplant; however, in transplant recipients, these responses are limited and may lead to diverse clinical manifestations of infection.

In this study, the EBV and CMV infection levels were less than expected (17% and 24%, respectively), which may have been caused by the CMV preemptive therapy regimens applied in pediatric patients, who comprised most of the participants. There is scant information published about the incidence of CMV-EBV coinfection in solid-organ transplant recipients, which had a rate of about 12.6% over the 1.5-year study period after transplant in our study.

The present study revealed the incidence of PTLD increased significantly among transplant recipients with CMV-EBV coinfection versus recipients without coinfection. Limited data are available about the role of CMV in PTLD development. Jaksch and colleagues have shown that the use of immunoglobulin G prophylaxis against CMV can inhibit development of PTLD.11 In a large data analysis study on kidney transplant patients who received immunoglobulin G prophylaxis against CMV, the PTLD incidence for the inpatient group was remarkably alleviated versus that shown in the control group.9 Manez and colleagues showed that CMV infection increased the post-transplant risk of PTLD after EBV primary infection.12

Arcenas and Widen demonstrated that CMV infection is associated with EBV reactivation in vitro. They focused on the potency of the CMV infection as an important cofactor in EBV reactivation among transplant recipients.13 Preiksaitis and Keay reported that CMV mismatch between donors and recipients is a factor in the PTLD incidence rate.14 There are several molecular and cellular explanations for these observations, including (1) both CMV and EBV infections can polyclonally activate B cells including EBV-infected B cells; and (2) suppression of T-cell activity via interleukin 10 (IL-10) gene homologs exists in both EBV and CMV, which may impair the MHC capacity of the major histocompatibility complex, which in turn may disrupt the antiviral immune response of the host.

In the interaction between CMV and EBV in transplant recipients, the clinical sequelae are not well known, but an increase in the expression of immediate early genes, including the gene for EBV ZEBRA protein, diffuse and restricted early genes were seen, and overall the pool of EBV-infected B cells was increased.15 Cytomegalovirus increases neutrophil migration, delays neutrophil apoptosis, and thereby accelerates tissue damage relevant to CMV immunopathology.16

Some studies have shown that IL-8 is a main cytokine that is excreted after CMV infection, which in addition to accelerating the production of CMV progeny virus, can modulate the immune system via the attenuation of the antiviral effect of interferon α. Costa and colleagues revealed that the expression of UL76 leads to IL-8 production during CMV infection.17 Some studies have shown the role of an induced inflammatory cytokine such as IL-8 in cancer development. Waugh and Wilson described the IL-8 pathway in tumor progression.18

Recent studies have demonstrated that stimulation of the pathways for the family of mammalian inducible transcription factors known as nuclear factor kappa-light-chain-enhancer of activated B cells (NF-κB) after CMV infection, which may lead to proinflammatory cytokines production, can be blocked via viral microRNAs miR-UL122-3p and miR-US5-1,19 as well as CMV UL26 viral proteins.20 It is noteworthy that NF-κB is a critical key factor involved in the transcription of CMV immediate early genes and a broad array of other genes.21

Overall, there are some common pathological routes between CMV and EBV with a possible synergistic effect.

We found frequent infection with CMV, EBV, and CMV-EBV in transplant patients who were suspected of these infections. Also, we showed correlations between PTLD and viral loads of CMV and EBV. Further studies are needed to clarify the pathogenesis and interactions involved in CMV-EBV coinfection.

Table 3. Prevalence of Cytomegalovirus Infection, Epstein-Barr Virus Infection, and Coinfection With Both According to Organ Type in Iranian Solid-Organ Transplant Recipients 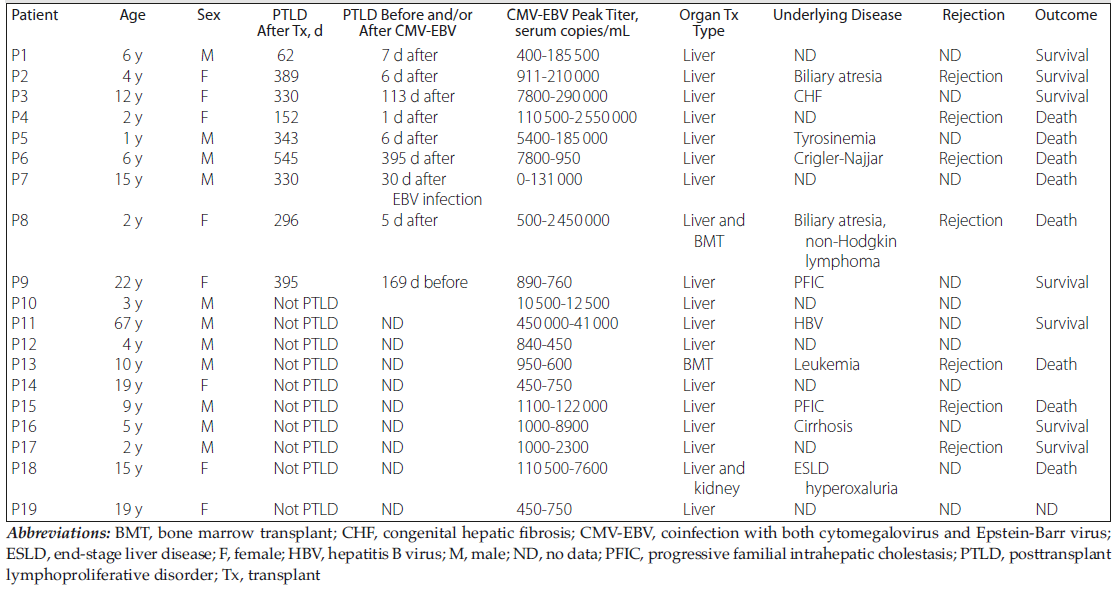 Table 4. Cytomegalovirus and Epstein-Barr Virus Peak Titers in 19 Patients With or Without Posttransplant Lymphoproliferative Disorder During 18 Months After Transplant 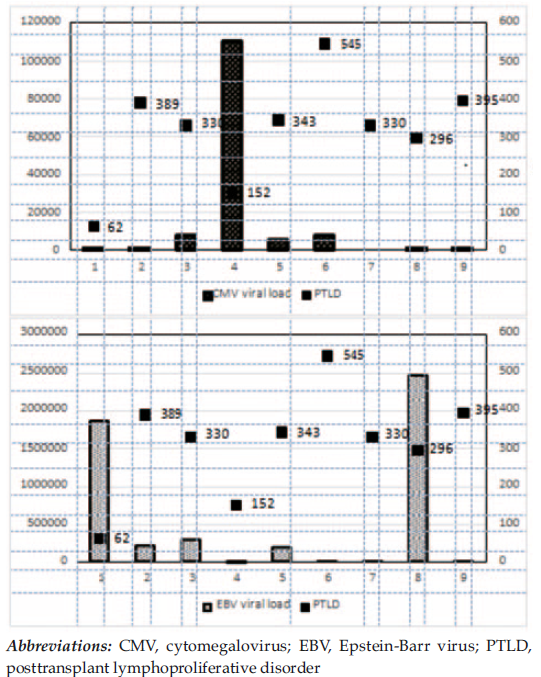