The study protocol was approved by the institutional review board of Asan Medical Center, which waived the requirement for informed consent because of the retrospective nature of this study.

Patients
Between January 2012 and June 2017, 2135 patients aged >18 years underwent deceased donor LT (n = 378, 17.7%) or living related donor LT (n = 1757, 82.3%) at our center for various liver diseases. Of living related donors, the relationships were first degree in 1359 (77.3%), family-in-law including spouse in 203 (11.6%), second degree in 101 (5.7%), and third degree in 94 patients (5.4%). All patients underwent CT scans before LT and regularly after LT for the surveillance of posttransplant complications. Of these patients, 190 were diagnosed with acute cellular rejection pathologically by transjugular or percutaneous liver biopsy. However, 49 were excluded: 20 because of absence of contrast-enhanced CT scans within 7 days before acute cellular rejection diagnosis; 14 because of coexisting major vascular (n = 8) or biliary (n = 6) complications on CT or Doppler US; and 15 because of coexisting liver diseases on pathologic examinations, including 9 patients with hemodynamic derangement and 6 with recurrent viral hepatitis. The remaining 141 patients, all of whom had undergone contrast-enhanced CT imaging within 7 days of pathologic acute cellular rejection diagnosis and did not have any coexisting posttransplant diseases, were included in our analyses (Figure 1). The 141 patients enrolled in this study included 97 men (68.8%) and 44 women (31.2%) with mean age of 51.8 ± 10.2 years (range,
20-73 years). The mean interval between LT and acute cellular rejection diagnosis was 212.7 ± 501.2 days (range, 4-3931 days). Patients were divided into 2 groups: early rejection (≤90 days after LT) and late rejection (>90 days after LT).

Contrast-enhanced CT images at baseline and at the time of acute cellular rejection diagnosis were analyzed to determine the interval changes in spleen size and variceal engorgement. Baseline contrast-enhanced CT was defined as the first postoperative CT scan, obtained within 1 week after LT or, if unavailable, the preoperative CT scan. Interval changes in spleen size were categorized by S score, with NA defined as splenectomy or procedures potentially affecting spleen size, such as splenic artery/vein embolization/ligation or splenic devascularization; S0 as not enlarged originally or decreased over the interval; S1 as equivocally unchanged splenomegaly; and S2 as an increase over the interval. Interval changes in variceal engorgement were categorized by V score, with V0 defined as originally absent or disappeared following surgical ligation, radiological embolization, or spontaneously; V1 as slightly decreased with residual engorgement or equivocally unchanged; and V2 as interval aggravated. Progression of portal hypertension was considered in patients with scores of S2 or V2.

Clinical outcomes
Clinical outcomes of patients with acute cellular rejection were investigated by reviewing their electronic medical records. Patients were grouped as good or poor responders depending on their response to immune suppression treatment. Patients were defined as good responders if they recovered without the need for additional liver biopsy or when follow-up biopsy showed a decreased rejection activity index. All other patients were considered poor responders, showing histological progression (no interval change/increase in rejection activity index or development of chronic rejection on follow-up biopsy) or graft failure (retransplant or graft-related death).

Statistical analyses
The demographic and clinical characteristics of patients who experienced early and late rejection were compared using t tests for continuous variables and the chi-square test or Fisher exact test for categorical variables. Interobserver agreement in CT scoring for interval changes in portal hypertension was assessed using Cohen’s kappa coefficients with 95% confidence intervals. Kappa coefficients were interpreted by using the following convention: less than 0.20 indicated poor, 0.21 to 0.40 indicated fair, 0.41 to 0.60 indicated moderate, 0.61 to 0.80 indicated substantial, and 0.81 to 1.00 indicated nearly perfect. Subsequent analyses were performed using consensus review results. Differences in CT scores and clinical outcomes between the early and late acute cellular rejection groups were compared using Fisher exact tests. The relationships between the progression of portal hypertension (CT score of S2 or V2) and responses to treatment were compared in the early and late acute cellular rejection groups using Fisher exact tests. The relationship between the progression of portal hypertension and graft survival at 6 months, calculated from the date of acute cellular rejection diagnosis to the date of graft failure, was assessed by the Kaplan-Meier method and compared by the log-rank test. All statistical analyses were performed using SPSS Statistics for Windows (version 23.0; IBM Corp). Two-sided P values < .05 were considered statistically significant.

The characteristics of the patients are shown in Table 1. Ninety-one patients (64.5%) were diagnosed with early rejection and 50 patients (35.5%) with late rejection. A total of 62 patients (44.0%) underwent surgical or radiological intervention, which can affect the portosplanchnic circulation. Thirty-seven patients (26.2%) underwent ligation/embolization of the portosystemic shunt, 20 (14.2%) underwent ligation/embolization of the splenic artery or splenic devascularization, and 15 (10.6%) underwent splenectomy, with 10 of these patients (7.1%) undergoing 2 or more of these procedures. There were no significant differences in age, sex, rejection activity index, type of graft, and incidence of intraoperative/perioperative procedures between the early and late rejection groups.

Graft survival at 6 months between patients with and without progression of portal hypertension did not differ significantly in both the early (P = .608) and late (P = .318) rejection groups (Figure 4).

Several factors during the early postoperative period may affect portal pressure. For example, graft size can be an important factor in patients who undergo living donor LT. Small-for-size grafts can lead to a sudden increase in intrasinusoidal pressure due to the relatively low capacity of the hepatic sinusoid.29 Postoperative volume overload or congestion can also lead to high intrahepatic vascular resistance, and variations in the degree of portal vein stenosis can increase portal pressure. Interactions among these various factors can result in the improvement, persistence, or development of portal hypertension during the early postoperative period, making it difficult to interpret results in the early rejection group. Huge portosystemic shunts are usually interrupted surgically or radiologically in our institution. These procedures can have a greater effect on portal pressure than acute cellular rejection-associated changes in graft parenchyma during the early postoperative period, possibly leading to the underestimation of portal hypertension. This may account for the lower frequency of progressive variceal engorgement shown in the early versus the late rejection group.

In contrast, confounding factors may have minimal effects during the late posttransplant period. Liver transplant recipients have had more time to adapt to the sizes of the grafts. Moreover, because most patients who experience late rejection do so in an outpatient setting, problems such as volume overload due to fluid therapy are less likely. In the present study, CT features of progressive portal hypertension were occasionally observed in the late rejection group and were more frequent in poor than in good responders to immunosuppressive treatment. The progression of portal hypertension during this period likely reflects the acute cellular rejection-associated parenchymal changes in the graft.

This study had some limitations. First, because of its retrospective design, there may have been selection bias in the study populations. Acute cellular rejection is common after LT, and patients with suspected mild acute cellular rejection were empirically treated with immune suppressants before pathologic confirmation. There are no definitive guidelines for performing liver biopsy, with the choice to obtain biopsy samples being at each clinician’s discretion. Therefore, patients with mild acute cellular rejection were not included in our study population, suggesting that our findings are applicable only to patients with clinically relevant acute cellular rejection. Second, some patients in the present study underwent procedures to change portal flow, which could have influenced the development or regression of portal hypertension. Therefore, it is hard to generalize the results of this study to patients treated using a different surgical strategy. Third, the present study is a cohort study. Comparisons with a control group are necessary to determine whether the progression of portal hypertension is diagnostic for acute cellular rejection. Fourth, although we analyzed CT features in these patients, we did not assess the consistency between CT features and changes in portal flow on Doppler US. Paired Doppler US scans were not always available, particularly during the late postoperative period. Doppler parameters such as portal blood flow velocity can better show the presence of portal hypertension as decreased or reversed values. Further studies pairing CT and Doppler US features are needed.

Computed tomography features suggesting the progression of portal hypertension are occasionally encountered in patients with acute cellular rejection. In patients with late rejection, the progression of portal hypertension is more frequently associated with poor than with good response to immune suppression treatment. Nevertheless, graft survival is not significantly affected. 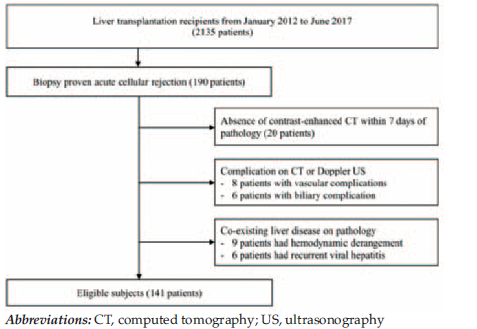 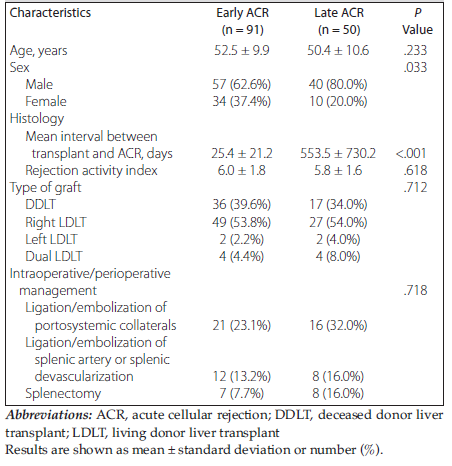 Table 1. Demographic and Clinical Characteristics of the Study Patients 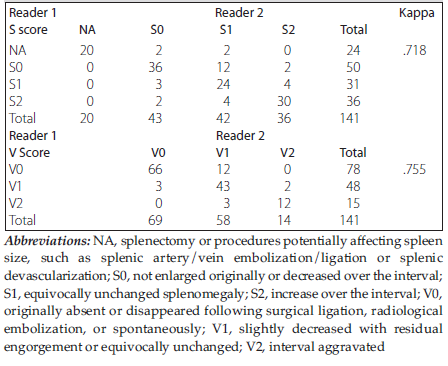 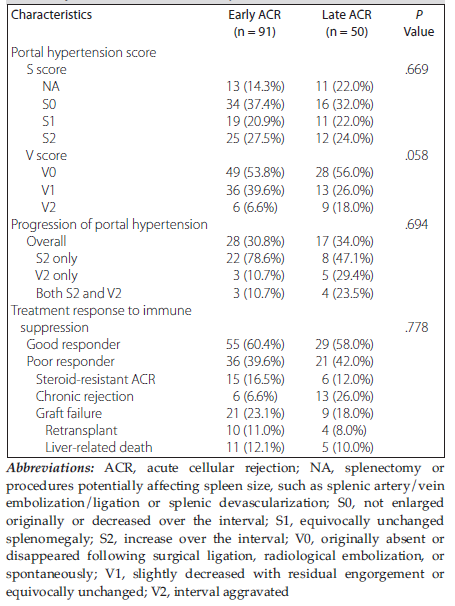 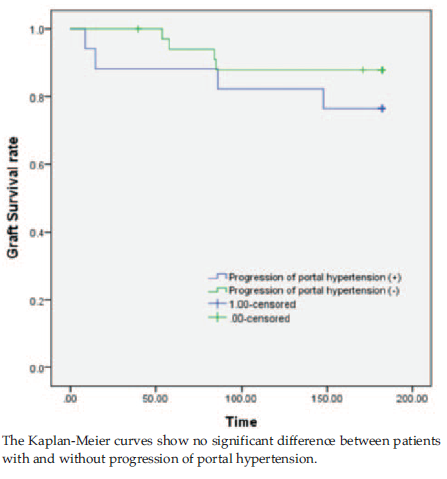