Pneumocystis jirovecii pneumonia is an opportunistic infection in kidney transplant recipients. It may be complicated by hypercalcemia. Here, we discuss a 59-year-old man who presented with respiratory symptoms and hypercalcemia. He had undergone a deceased donor kidney transplant 2 years previously. The patient had persistent hyperparathyroidism, but his serum calcium level was normal. At the time of admission, his serum calcium level had increased and his parathyroid hormone level was suppressed. He was diagnosed with Pneumocystis jirovecii pneumonia. Serum calcium and parathyroid hormone levels returned to baseline values after treatment. Pneumocystis jirovecii pneumonia is an important infection that can present with hypercalcemia among kidney transplant recipients.

Pneumocystis jirovecii pneumonia (PJP) is an opportunistic infection that most frequently occurs during the first year after transplant. Although its incidence decreases with prophylaxis, it is an important life-threatening infectious complication in kidney transplant recipients. Clinical findings are nonspecific, such as cough, fever, and dyspnea.1 In some case reports, hypercalcemia presented as a rare complication of PJP.2,3 Here, we report a kidney transplant recipient who presented with insidious symptoms of PJP and hypercalcemia 2 years after transplant.

A 59-year-old transplant recipient who had undergone a kidney transplant 2 years previously was admitted with fatigue, cough, exertional dyspnea, and weight loss. He had a history of autosomal dominant polycystic kidney disease. The donor was a 40-year-old man whose cause of death was anoxia. Antithymocyte globulin had been given as induction therapy. For prophylaxis, trimethoprim-sulfamethoxazole (TMP-SMX) had been administered for 6 months and valganciclovir for 100 days because the recipient was seropositive for cytomegalovirus (CMV). During the posttransplant period, he had developed hypertension and gout. He had no history of rejection or infection. His baseline creatinine level was 1.5 to 2 mg/dL. After transplant, his serum calcium level had increased to 11 mg/dL. He had been treated with cinacalcet for 6 months. His serum calcium level had been around 10.5 mg/dL during treatment with cinacalcet and 10 mg/dL at the end of treatment. After discontinuation of cinacalcet, his calcium level had been within normal limits. Maintenance medications had included prednisolone (5 mg/day), mycophenolate mofetil (MMF; 1 g/day), tacrolimus (2 mg/day), valsartan-hydrochlorothiazide (320 mg/day-25 mg/day), nebivolol (5 mg/day), colchicine (0.5 mg/day), allopurinol (150 mg/day), and omeprazole (20 mg/day).

On admission 2 years after transplant, his physical examination was normal except for fever. During measurements of breathing room air, the patient’s partial pressure of oxygen in arterial blood was 50.4 mm Hg and oxygen saturation was 86%. Laboratory findings are presented in Table 1. High-resolution computed tomography (HRCT) revealed multiple nodules, ground-glass infiltrations, and septal thickening (Figure 1). Bronchoscopy was performed on the third day of admission, and bronchoalveolar lavage fluid demonstrated PJP cysts with Gram-Weigert staining. Bronchoalveolar lavage fluid polymerase chain reaction (PCR) for CMV was positive. Bacteriological, virological, mycological, and mycobacteriological evaluations revealed no other microorganisms. Blood PCR for CMV was negative. Lung and abdominal CT findings were not compatible with sarcoidosis, malignancy, or tuberculosis.

Treatment with TMP-SMX and ganciclovir was initiated intravenously on the third day of admission. Doses of MMF and tacrolimus were decreased. Additionally, methylprednisolone was administered to treat hypoxemia. Hydration and furosemide were given initially, but hypercalcemia persisted and hypervolemia occurred. Therefore, the patient required hemodialysis. After only 2 sessions 2 days apart, his volume status improved and serum calcium levels stabilized to around 13 to 13.5 mg/dL. Use of bisphosphonates was avoided because of graft dysfunction. On the fifth day of antibiotherapy, the patient no longer needed supplemental oxygen. His serum calcium level began to decrease by the sixth day of treatment with TMP-SXM and was normal after the second week. His parathyroid hormone (PTH) level was 147.9 ng/L at the third week.

Follow-up HRCT revealed partial regression (Figure 2). The patient was treated with TMP-SMX for 21 days and ganciclovir for 14 days. The methylprednisolone dose was gradually decreased to maintenance level, and the MMF dose was increased. At discharge, his serum calcium level was normal (Table 1). The TMP-SMX prophylaxis was administered for 3 months. Follow-up HRCT revealed resolution of infiltrations after 2 months (Figure 3). At his last visit, 6 months after being diagnosed with PJP, the patient’s calcium level was 10.1 mg/dL and PTH level was 560.9 ng/L.

Hypercalcemia is a common finding after kidney transplant and is almost always secondary to persistent hyperparathyroidism.4,5 We report a kidney transplant recipient who had hypercalcemia associated with PJP presenting 2 years after transplant. The patient had persistent hyperparathyroidism after transplant. However, his serum calcium level had been normal despite a high PTH level before onset of PJP. At the time of infection, his serum calcium level increased and his PTH level became suppressed. After treatment of PJP, serum calcium and PTH levels returned to baseline values.

In our case, persistent hyperparathyroidism may have been the underlying cause of hypercalcemia. Before the onset of PJP, the patient had normal serum calcium levels despite persistent hyperparathyroidism. At the time of diagnosis, PTH level was suppressed with increasing serum calcium levels. Hypercalcemia resolved and PTH level increased to baseline value after treatment of PJP. Additionally, hypercalcemia was independent of PTH and unresponsive to furosemide and hydration; therefore, hemodialysis was required. Serum calcium level was stabilized after 2 sessions of dialysis by the impact of PJP treatment. These data support etiologies other than persistent hyper­parathyroidism. Corticosteroids may contribute to the resolution of hypercalcemia by suppressing 1α-hydroxylase in pulmonary alveolar macrophages.15 All these findings suggest a relationship that resembles the relationship between hypercalcemia and granulo­matous diseases. Unfortunately, we are unable to demonstrate a granulomatous inflammation secondary to PJP because a transbronchial lung biopsy was not performed. 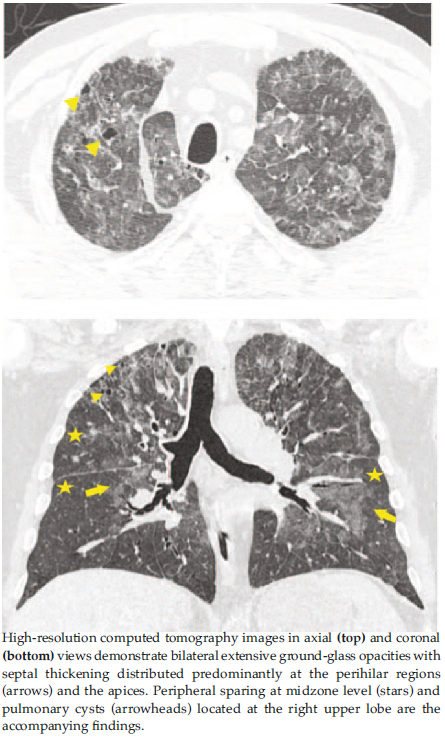 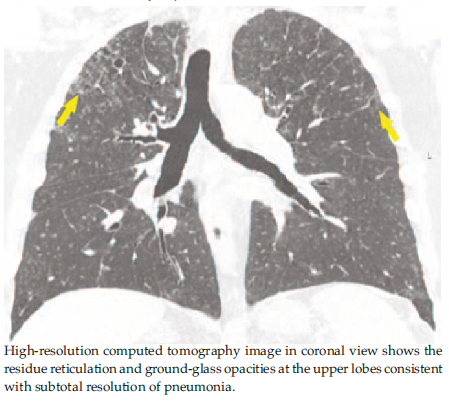 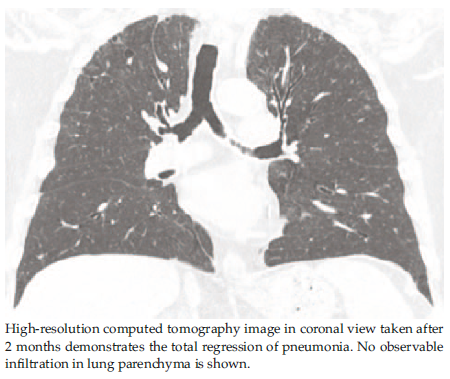