Hepatitis B virus-related acute-on-chronic liver failure (HBV-ACLF) is a life-threatening syndrome with high mortality, and liver transplant (LT) remains the only definitive treatment to reduce the mortality of advanced HBV-ACLF.1 Early allograft dysfunction (EAD) is an undesirable complication after LT and an important factor for morbidity and mortality.2-4 Early allograft dysfunction occurs in 15% to 44% of patients after LT,5-7 and the death rate of patients with EAD ranges from 7.2% to 18.8%.2,3 Patients with EAD are more likely to develop acute kidney injury, more likely to require hemodialysis hospitalization due to persistent renal insufficiency, and more likely to lose a graft.2,8

Previously published studies have found that EAD is associated with donor/recipient clinical and epidemiological characteristics, as well as with transplant procedure.9,10 Donor-related factors include body mass index (BMI, calculated as weight in kilograms divided by height in meters squared), age, sex, obesity, sodium >157 mmol/L, and other factors.8,10,11 The LT-related factors include intra-operative transfusion of packed red blood cells (PRBC), transfusion times, operative times, and cold ischemia and warm ischemia times. Recipient-related factors considered associated with EAD include carcinoma, BMI, Model for End-Stage Liver Disease (MELD) score, hepatitis C virus infection, pretransplant diabetes, posttransplant biliary complications, and lower cholesterol.8,12-15 Although there are some published studies about EAD risk factors, to date none of those was a specific study of transplant recipients with HBV-ACLF. The acute condition, rapid progress, and relatively poor prognosis of patients with HBV-ACLF are details that confirm the importance of EAD risk factors to improve the organ allocation system, achieve better donor-recipient compatibility, improve recipient outcomes, and reduce financial cost of treatment. The present study investigated the incidence of EAD, the risk factors of EAD, and the role of EAD to predict mortality of transplant recipients with HBV-ACLF.

Study population
We performed a retrospective study of adult deceased donor LT procedures from January 2015 to June 2020 at the Second
Xiangya Hospital of Central South University. Patients without HBV infection, age <18 years, mismatch of donor-recipient ABO/Rh, retransplant, living donor LT, and combined multiple organ transplant were excluded. The diagnosis of HBV-ACLF was defined according to the criteria of the Chinese Group on the Study of Severe Hepatitis B Acute-on-Chronic Liver Failure (COSSH-ACLF), which include international normalized ratio (INR) ≥1.5 and total bilirubin ≥12 mg/dL regardless of liver cirrhosis in patients with chronic HBV.16 Organ failure was defined according to a modified sequential organ failure assessment known as CLIF-SOFA.17 Liver failure was defined by a serum bilirubin level of ≥12.0 mg/dL. Kidney failure (KF) was defined by a serum creatinine level of ≥2.0 mg/dL or the use of renal replacement therapy. Cerebral failure was defined by grade III or grade IV hepatic encephalopathy, according to the West Haven criteria. Coagulation failure (CF) was defined by INR >2.5 and/or a platelet count of ≤20 × 109 cells/L. The INR calculation was included because it is commonly used in studies of cirrhosis and has been validated as a prognostic factor. Circulatory failure was defined by the use of dopamine, dobutamine, or terlipressin. Respiratory failure was defined by a value of ≤200 for the ratio of the partial pressure of arterial oxygen versus the fraction of inspired oxygen (ie, the Spo2-to-F?o2 ratio). Further categorization of ACLF is based on the number of organ failures.18 The HBV-No-ACLF group was defined as patients with HBV infection but who had not developed ACLF.

We included 323 recipients in the HBV-ACLF group and 445 recipients in the HBV-No-ACLF group. The study protocol conformed to the ethical guidelines of the Declaration of Helsinki and was approved by Institutional Review Board of the Second Xiangya Hospital, Central South University (No. 2019-050). Written informed consent was obtained from all participants.

Early allograft dysfunction was defined by the presence of 1 or more of the following variables3: (1) bilirubin ≥10 mg/dL on postoperative day 7, (2) INR ≥1.6 on postoperative day 7, and (3) a level of alanine aminotransferase or aspartate aminotransferase >2000 IU/mL within the first 7 postoperative days. According to the definition of EAD, the patients in the HBV-ACLF and HBV-No-ACLF groups were subdivided into groups of patients with EAD and patients without EAD (Figure 1). Outcome variables included the incidence of EAD and 1-year survival rate of recipients.

Operative procedures and immunosuppression therapy
Starting January 1, 2015, all organ donations were performed according to the following Chinese protocol.14 The hepatic allografts are procured from donors by rapid technique, including flushing of the aortic and portal veins and cold storage, as described previously.15 All hepatic allografts are perfused and preserved with University of Wisconsin solution, and the operative procedures are performed according to standard techniques or piggyback methods. Patients under-going LT receive antithymocyte globulin-Fresenius or basiliximab and methylprednisolone as part of the induction protocol. Conventional post-transplant immunosuppression includes tacrolimus and mycophenolate mofetil.

Statistical analyses
Continuous variables are shown as median values (with ranges), and categorical variables are shown as number of patients (with percentages). Comparisons of groups were performed with the Kruskal-Wallis test, unpaired t test, and the Pearson chi-square or the Fisher exact tests, as warranted. Risk factors significant to patient survival were determined and included in a Cox proportional hazards regression model analysis. Probability values of survival data were estimated by the Kaplan-Meier method. All statistical analyses were performed with SPSS (version 11.0; IBM) or MedCalc 1 (version 5.0; MedCalc Software) statistical software. P < .05 was considered statistically significant.

Early allograft dysfunction was identified in allografts with marginal function early after LT. Previously published studies have validated EAD as a critical intermediate end point for poor graft and patient outcomes after LT.2,3,8 In most Asian countries, patients with HBV account for more than 70% of ACLF cases.19,20 In our present retrospective study from a single center in China, we demonstrated for the first time that pre-LT KF/CF and operative time were independent risk factors of EAD in patients with HBV-ACLF after deceased donor LT. In addition, there was a synergistic effect of EAD and KF/CF to produce worse outcomes for patient survival after LT versus patients who had either EAD or KF/CF.

We found that pre-LT KF, pre-LT CF, and operative time were independent risk factors of EAD in these LT recipients. The independent risk factor of prolonged operative time was consistent with a previous study,12 although pre-LT organ failure(s) has not been previously studied as an EAD risk factor(s). Impaired immune function was the central pathogenesis of ACLF, with an outcome characterized by an initial excessive systemic inflammatory response that drives organ failure.21 Additionally, the extension of a systemic inflammatory response into the organ (ie, as a consequence of extremely high circulating plasma levels of inflammatory molecules) may lead to organ failure by direct deleterious effects on microcirculatory homeostasis, mitochondrial function, and cell survival.22 The factors of KF and CF showed the highest prevalence among ACLF patients.23 A condition of dysfunctional or damaged organs could be an independent factor to stimulate production of cytokines and reactive oxygen species24 and thereby induce graft dysfunction.25

As previously established, EAD initiated a systemic inflammatory response and resulted in oxidative stress from the creation of reactive oxygen species.18-20 Biopsies of liver allografts with EAD demonstrated alterations that included centrilobular hepatocyte swelling, hepatocanalicular cholestasis, periportal and perivenular congestion, hemorrhage, necrosis, and neutrophilic inflammation. These pathological changes have also been observed in patients with sepsis.21 In addition, in our study, we found that the incidence rate of EAD was significantly higher in the HBV-ACLF group versus the HBV-No-ACLF group. The results showed that preexisting damage would compromise the occurrence of EAD after LT and that the associated systemic inflammatory response in HBV-ACLF recipients could be an initiating or aggravating factor of EAD.

In addition, we also found that the combination of EAD and KF/CF was associated with poor outcomes for patients. These data suggested that pre-LT KF and pre-LT CF in the HBV-ACLF group were not only independent risk factors of EAD but were also reliable predictors to identify patients who may be at high risk of mortality. Herein, the patients with both EAD and with pre-LT KF/CF should be treated with robust medical monitoring and aggressive management.

We identified independent risk factors for the inciden-ce of EAD in patients with HBV-ACLF who underwent LT, including pre-LT KF/CF of recipients and operative time of LT. The combination of EAD and pre-LT KF/CF of recipients was significantly asso-ciated with the poor patient survival after LT. Future investigation to improve patient survival after LT should focus on the factors associated with higher risk of EAD with an aim to develop early prophylaxis and treatment. 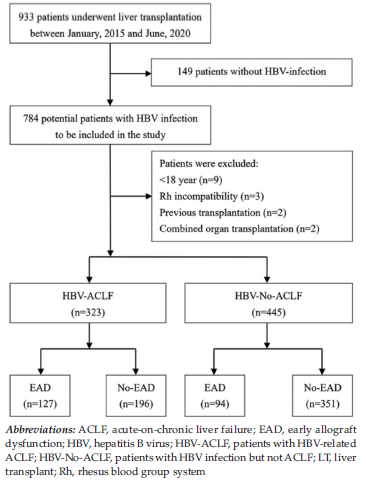 Figure 1. Flowchart for Selection of Liver Transplant Recipients With Hepatitis B Virus Infection, With and Without Acute-on-Chronic Liver Failure 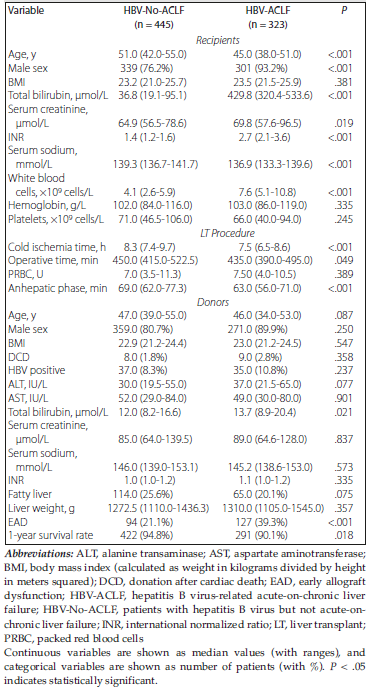 Table 1. Characteristics of Recipients, Donors, and Procedure for Liver Transplant Recipients With Hepatitis B Virus With or Without Acute-on- Chronic Liver Failure 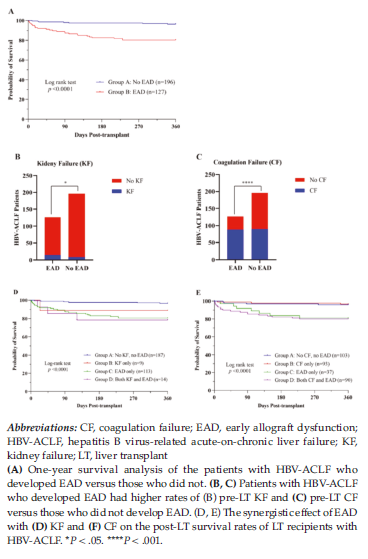