There are reports of Roux-en-Y enteric drainage12,13 and the use of a unique “button technique” to prevent this complication.14 Walter and colleagues reported that duodenoduodenostomy was associated with less anastomotic insufficiency than duodenojejunostomy.15 However, all of these operations require major changes in procedures and special techniques. Therefore, we investigated a simpler method to reduce the risk of duodenal perforation. Because most reported perforation sites are in the duodenal stump, we focused on the stump treatment method.16 Previously, we stapled the graft duodenum with a DST Series GIA stapler (Covidien) or an EES linear cutter (Ethicon). In some cases, the staple line was reinforced with additional seromuscular sutures, but this did not completely prevent graft duodenal perforation. Therefore, as a new technique, we began to staple the graft duodenum with a reinforced stapler (Endo GIA Reinforced Reload with Tri-Staple Technology; Covidien). This automatic stapling device has preattached suture reinforcement felt (Neoveil; Gunze) made of polyglycolic acid (PGA). The improved pressure resistance is expected to reduce leakage by increasing intratissue pressure and contributing to improved hemostasis.17,18 Use of the reinforced stapler has been reported in sleeve gastrectomy, colorectal surgery, distal pancreatectomy, and pulmonary wedge resection, but there are so far no reports of its use in pancreas transplant.17,19-21 We examined the effect of use of the reinforced stapler in preventing graft duodenal perforation after pancreas transplant.

Ethical approval and informed consent
This study was performed in accordance with the guidelines of the Declaration of Helsinki and was approved by the Kyushu University Institutional Review Board for Clinical Research (approval number: 30-531). Informed consent was obtained in the form of an opt-out option on the hospital Web site.

Organ procurement
In all cases, pancreas and kidneys were procured en bloc. During procurement of pancreas and kidneys, only gross observation of the organs was performed during warm dissection; most of the manipulation was performed during cold dissection after cross-clamping. Core cooling was achieved with University of Wisconsin cold storage solution, and surface cooling was achieved with slush ice. In most cases, the liver was procured at the same time, and the GDA and common hepatic artery were often determined to be the arterial dissection lines. The portal vein was transected to a level about 5 mm from the upper border of the pancreas, and the inferior vena cava was separated slightly cranial to the renal vein. The transverse mesocolon was separated.

Surgical procedure for bench surgery using the reinforced stapler
The proximal side of the duodenum was transected with the reinforced stapler (Endo GIA Reinforced Reload with Tri-Staple 60-mm purple) just beyond the pylorus (Figure 1). The distal side was transected with the same device at the third portion of the duodenum (Figure 2). The length of the duodenum was determined to be approximately 10 cm, and no seromuscular sutures were added to either staple line (Figure 3). The GDA and common hepatic artery were reconstructed by interposition reconstruction with an I graft using the donor iliac artery or by end-to-end anastomosis. If transected at the root of the celiac artery, the superior mesenteric artery and splenic artery were reconstructed with a Y graft using the donor iliac artery.

Surgical procedure for recipient
The pancreas graft was placed in the right retroperitoneal space, the portal vein was anastomosed to the right external iliac vein, and the Carrel patch was anastomosed to the right external iliac artery. Methylprednisolone sodium succinate (250-500 mg) was injected intravenously after venous anastomosis to prevent ischemia-reperfusion injury. A 20-cm fenestration was made in the peritoneum, and the graft duodenum and recipient ileum were anastomosed laterally about 40 cm from the terminal ileum with side-to-side anastomosis with the nonreinforced stapler (Endo GIA Reloads with Tri-Staple 60-mm purple). The common channel was closed with 4/0 PDS II continuous sutures (Ethicon).

Statistical analyses
Continuous data were analyzed with the Mann-Whitney U test. Categorical data were analyzed with the chi-square test or the Fisher exact test, as appropriate. Kaplan-Meier curves were constructed to examine graft survival, and differences between groups were determined by the log-rank test. Independent factors associated with the occurrence of duodenal perforation were selected by using univariate logistic regression. If there were zero cells, each cell was corrected by adding 1/2 (Haldane-Anscombe 1/2 correction). Values of P < .05 were considered to indicate statistical significance, and all statistical analyses were performed with JMP 15.0.0 (SAS Institute) and EZR (Easy R) version 1.4122 (The R Foundation for Statistical Computing).

Analyses of perioperative factors and postoperative course
Data on perioperative factors and postoperative course are shown in Table 2. There were no significant differences in operation time or blood loss between the 2 groups. The proportion of patients with preserved GDA flow was significantly higher in the conventional group. The proportion of patients with GDA reconstruction was also significantly higher in the conventional group. The incidence of graft duodenal perforation was higher in the conventional group (6 cases) than in the reinforced group (0 cases). The mean time to onset of graft duodenal perforation was 19.2 days (range, 8-55 days). In 5 of these 6 cases, the perforation site was at the duodenal stump, according to the results of contrast examination; in the sixth case, the site of perforation was difficult to identify. Three patients recovered with only drainage treatment, with 1 who had conversion to bladder drainage and 2 who underwent graftectomy. There were no significant between-group differences in other complications, including bleeding, perigraft abscess, and partial thrombosis. Kaplan-Meier survival analysis showed 1-year cumulative graft survival rates in the reinforced group and conventional group of 100% and 83.9% (P = .13), respectively (Figure 4).

Graft duodenal perforation after pancreas transplant is a serious complication and is often difficult to treat. Conservative treatment with drainage may be successful; however, peritonitis may sometimes develop and graftectomy may be required. In our case series, 3 of the 6 graft duodenal perforations were successfully treated with drainage but required a prolonged treatment period of 2 to 3 months. One of the remaining cases was converted to bladder drainage and 2 to graftectomy. Although it did not address pancreas transplant, a study by Orsenigo and colleagues found that the absence of manual reinforcement over the duodenal stump in gastric surgery was an independent risk factor for postoperative duodenal stump fistula formation.23 We have added seromuscular sutures to the graft duodenal stump, but even this technique does not completely prevent graft duodenal perforation. Therefore, we decided to staple the graft duodenal stump with the Endo GIA Reinforced Reload with Tri-Staple with PGA attached to the fork, a product that was launched in 2014.

Interestingly, patients with preserved GDA blood flow had a higher incidence of graft duodenal perforation than other patients, although this difference was not statistically significant. In theory, preserved GDA blood flow should help maintain blood flow in the pancreas head and graft duodenum, leading to a better graft outcome.27 Nghiem and colleagues reported that 14.2% of pancreas grafts did not have adequate blood supply to the pancreas head and the duodenum on angiography,28 indicating that the GDA may require reconstruction. However, the GDA can be sacrificed in many cases because of the presence of the pancreatic arcade. For example, when Y-graft reconstruction is required, the GDA is usually sacrificed.29 Thus, the need for GDA reconstruction is controversial. Although this study was not designed to assess the need for GDA reconstruction, our findings suggest that not performing GDA reconstruction may not affect graft duodenal perforation. A more important factor affecting the outcome was the proper manipulation of the graft duodenal stump.

There are some limitations to this study. First, the incidence rate of graft duodenal perforation in our institution with the use of a conventional nonreinforced stapler was 19.4%, which was higher than shown in previous reports. However, since the introduction of the reinforced stapler, no cases of perforation have occurred. Because all cases included in the reinforced group were from 2016 to 2020, we cannot eliminate the possibility that the difference in results between the 2 groups was because of procedural proficiency of the surgeons. Second, this was a retrospective study. Third, because of the small sample size, multivariate analysis of risk factors for the occurrence of graft duodenal perforation was not performed. Fourth, the possibility of late-onset graft perforation with this technique was not considered because of the short follow-up period. Finally, the cost of using the device was not addressed. However, if the device is effective in preventing graft duodenal perforation, which requires a prolonged hospital stay, the increased cost of the device will not be a major issue. Further large-scale, long-term studies are required to address the above limitations. 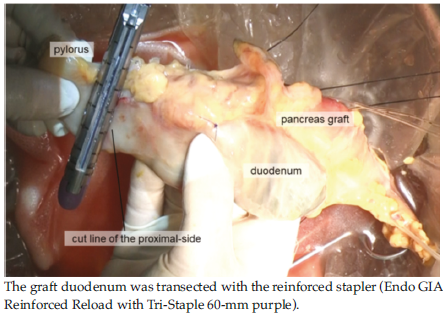 Figure 1. Cut Line on Proximal Side Set Just Beyond the Pylorus 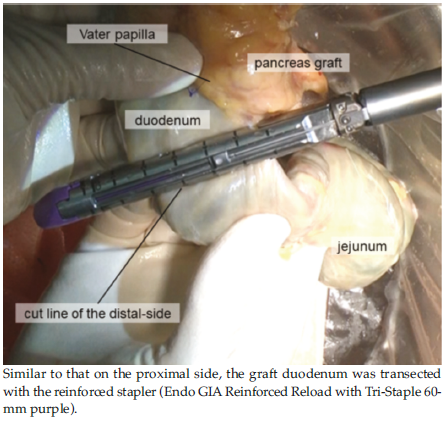 Figure 2. Cut Line on Distal Side Set at the Third Portion of the Duodenum 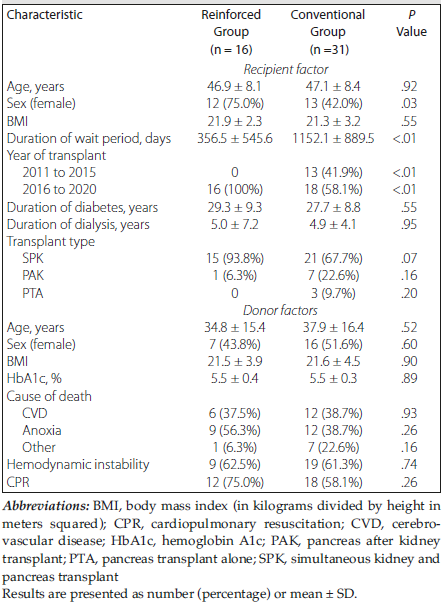 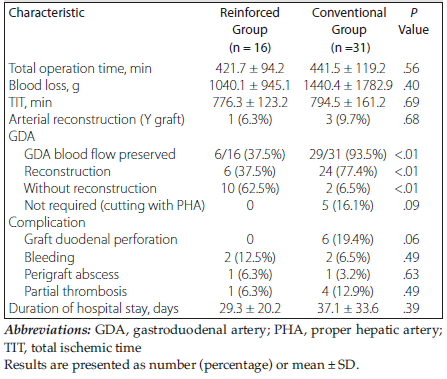 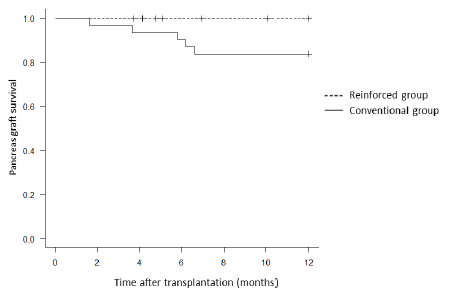 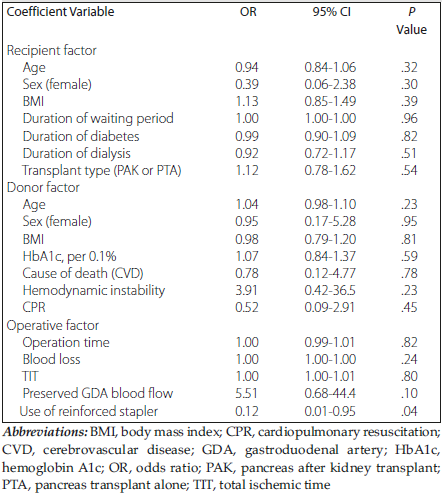