Ethics
The study conformed to the principles of the Declaration of Helsinki and Good Clinical Practices. All subjects participated voluntarily and gave informed consent. The study was approved by our local ethics committee.

Data collection
All relevant recipient and donor variables were reviewed and compared between the 2 recipient indication groups. Recipient and donor charac-teristics and recipient survival data after up to 5 years, including 30 and 90 days and 1 year posttransplant, where applicable, were collected.

Statistical analyses and preparation of figures
Qualitative (dichotomous) variables were compared by the Pearson chi-square test or, when its application conditions were not met, by the Fisher exact test. Quantitative variables were compared by the t test. The tests were performed bilaterally, and the threshold of significance was set at P = .05. Statistical analysis was performed using GraphPad Prism and IBM SPSS Statistics software (SPSS). Figures were created using GraphPad Prism, Microsoft PowerPoint, and IBM SPSS.

Recipient data
Among the 218 included recipients (92 with ICM; 126 with non-ICM), patients with non-ICM were significantly younger (51.7 vs 59.1 years; P < .001), had fewer previous cardiac surgeries (56% vs 75%; P = .01), and lower incidence of ventricular assist device support pretransplant (46% vs 61%; P = .04). All other baseline characteristics were comparable, including sex, parameters of size mismatch, and comorbidities. Furthermore, no statistically relevant differences could be observed in laboratory values, including recipient sodium and potassium levels as well as creatinine, bilirubin, lactate dehydrogenase, and hemoglobin levels (Table 1).

Perioperative morbidity and mortality
Regarding peri- and postoperative parameters, both groups did not differ in total or cold graft ischemia time, duration of surgery, time on mechanical ventilation, length of posttransplant hospital or intensive care unit stay or need for transfusion of packed red blood cells, platelets, or fresh frozen plasma (Table 3). Most patients received the bicaval technique for heart transplant. Cardioprotection was performed in all patients through cold storage with crystalloid cardioplegia. Regarding common postoperative morbidities, patients did not differ in the likelihood of kidney failure with hemodialysis posttransplant, neurological complications, incidence of acute graft rejection (>1R), or the need for mechanical life support posttransplant. However, recipients with non-ICM had less frequent incidences of severe infections or sepsis (19% vs 32%; P = .03).

Our main finding was that, despite differing baseline characteristics and postoperative parameters, the ICM versus non-ICM recipient diagnosis did not influence short-term survival up to 1 year after heart transplant.

In our study cohort, 42% of recipients had ICMs and 58% had non-ICMs. This ratio was found to be comparable to data in the literature, where, between 1982 and 2018, around 40% of all recipients were diagnosed with ICM.1,11 In our study, patients with non-ICMs were significantly younger (52 vs 59 years), which can be explained by the underlying mechanism of heart failure in those patients with higher percentage of hereditary (genetic) causes. This also was similar to published data in a large cohort of heart transplant recipients that showed that only 32% of patients in the age group of 40 to 59 years were ICM patients, whereas in age group >70 years the percent of patients was 53%.1 On the other hand, donors of those recipients did not show perio-perative differences in both groups, including age, making donor age unlikely to be a significant confounder in our study.

Concerning preoperative parameters, ICM pati-ents versus non-ICM patients had a higher rate of previous cardiac surgeries (75% vs 56%), which can be explained by longer history of coronary artery disease (ie, previous need for coronary artery bypass graft). These results were similar to reported data where around 61% of all heart transplant patients had previous cardiac surgery.12 Furthermore, patients with non-ICM showed a lower incidence of ventricular assist device support pretransplant (46% vs 61%) than patients with ICM, as shown in a study with a larger cohort13 (44% vs 56%).

With respect to perioperative morbidity, although both groups did not differ in most parameters, recipients with non-ICM had fewer incidences of severe infections or sepsis (19% vs 32%) than recipients with ICM. This can be partly but not fully explained by the older-aged ICM cohort, as severity and mortality of sepsis are associated with higher age.14,15

Regarding early-term and midterm survival, we observed no differences between recipients with ICM and non-ICM before heart transplant. As previously shown, 30-day survival was also comparable to that shown in larger cohorts of heart transplant recipients (89% to 93%).16,17 However, compared with heart transplant recipients in the United States, the overall survival in the whole cohort was less, independently from our subgroup analysis on recipient diagnosis.1 This can be mainly explained by 2 factors. First, according to the International Society for Heart and Lung Transplantation database from 2010 to 2018, donor ages in Europe versus North America were extremely different, with median age difference of 17 years.1 Because higher donor age is associated with a higher mortality in heart transplant recipients,18 this leads to a need for acceptance of possibly worse organs in European countries, including Germany, compared with the United States. Second, in Europe, organ allocation through the waiting list is performed by categorization into 2 categories: regular or high-urgent. In the high-urgency-based system, progression of cardiac diseases leads to preferred organ allocation, and those with worse expected outcomes without transplant are therefore prioritized. To overcome these shortcomings, it is expected that a “Cardiac Allocation Score”19 will be introduced soon. However, presently, despite limited data from prospective studies, this shortcoming could potentially lead to a higher mortality in European versus US recipients. Both factors contributed to a lowered survival after 1 year between both systems, which then “drags along” the lowered survival after 5 years in our Kaplan-Meier survival analysis.

The influence of recipient indication for heart transplant on survival posttransplant remains controversial; however, published (retrospective) data have suggested mainly a small survival benefit in non-ICM versus ICM recipients.1,10,11 However, those cohorts included retrospective patient data from dif-ferent heart transplant eras, leading to a potential bias.

A major and obvious limitation of our study was its single-center and retrospective design, which included several generations of surgeons contributing to the data. Therefore, future studies with larger cohorts, preferably from the newest era of heart transplant, and studies having a prospective design are needed to confirm or decline the association of recipient diagnosis on survival.

In this retrospective analysis, although barring different baseline characteristics and perioperative morbidities, recipient indication of ICM versus non-ICM was not associated with survival after heart transplant. 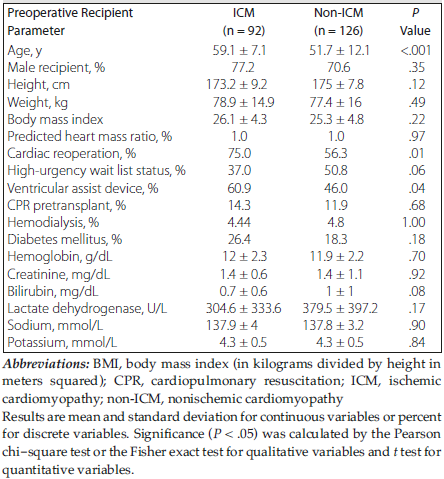 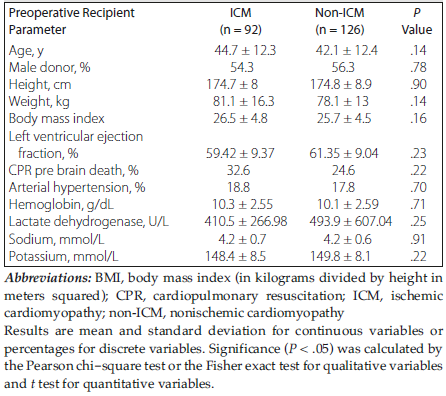 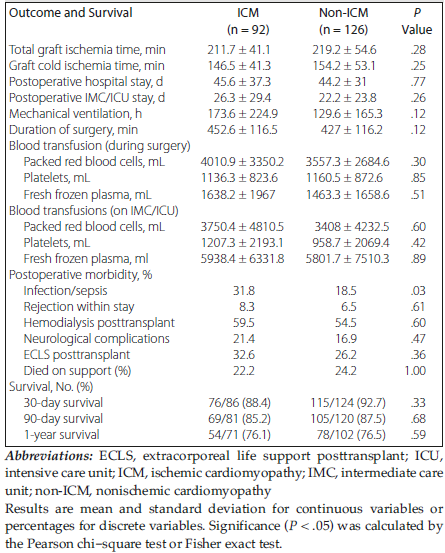 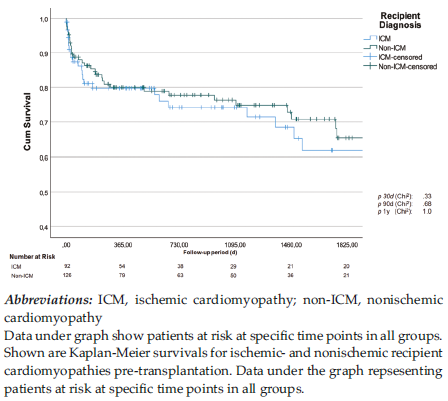