In this single-center analysis, we have evaluated the incidence, risk factors, and overall survival rates associated with postoperative malignancy among kidney transplant recipients.

Most patients received immunosuppressive drugs as induction therapy with anti-CD25 antibody or antithymocyte globulin. All patients underwent a standard triple immunosuppression therapy (tacrolimus or cyclosporine, mycophenolic acid or mizoribine, and steroids). Methylprednisolone was administered for T-cell-mediated rejection in patients as indicated by renal biopsy, and this treatment was also used in patients who were clinically diagnosed with rejection. Antithymocyte globulin was used after methylprednisolone treatment in patients with steroid resistance. Rituximab, plasma exchange, and intravenous immunoglobulin were used for antibody-mediated rejection. Before 2020, there has been no case of ABO-incompatible kidney transplant in our center. Patients were followed up until diagnosis of malignancy, death, date of last follow-up contact, or November 30, 2021, whichever event was first. This study was evaluated and approved by the ethics committee of the Affiliated Hospital of Qingdao University (No. QYFY-WZLL-26839) and conducted in accordance with the Helsinki Declaration.

Statistical analyses
The patients were divided into malignancy-positive and malignancy-negative groups. Descriptive data are shown as percentages for categorical variables. Continuous variables are shown as mean values with SD or median values with interquartile range (IQR, 25%-75%). When 2 groups were compared, statistical significance was determined with the t test, the Mann-Whitney test, the Pearson chi-square test, and the Fisher exact test for continuous and categorical variables, as appropriate. Cox proportional hazards regression univariate and multivariate analyses were performed to ascertain risk factors associated with malignancy development after kidney transplant. All statistical analyses were performed with R software (version 4.1.2, http://www.r-project.org/). All tests were 2-sided, and the significance level was defined as P < .05.

Patient characteristics
A total of 811 renal transplant recipients were followed up. Characteristics of included patients are listed in Table 1. The median follow-up time was 3.0 years (IQR, 1.6-4.3 years). The mean age of all the transplant patients was 41.2 ± 11.1 years, and 70.4% were male. Of the 811 patients, only 10 patients received their transplanted kidney from living related donors. Most recipients (92.5%) received dialysis prior to transplant. Most transplant patients received an immunosuppressive regimen based on tacrolimus combined with mycophenolic acid and methylprednisolone after transplant. The most common primary kidney disease was chronic glomerulonephritis (41.5%). Nineteen patients had undergone a retransplant procedure.

Posttransplant lymphoproliferative disorders comprised the most common type of malignancy in our center, followed by thyroid cancer and urologic neoplasms. Similarly, PTLD comprised the most common type of malignancy in Japan, Hong Kong, and Singapore.8,12,13 A study of 8164 kidney transplant recipients in Australia and New Zealand showed that non-Hodgkin lymphoma occurred with bimodal distribution after transplant. Increased risk of early non-Hodgkin lymphoma (<2 years after the first transplant) was observed in patients whose serology at transplant tested negative for Epstein-Barr virus (EBV) and in patients who received treatment with T-cell-depleting antibodies. Late non-Hodgkin lymphoma (≥2 years) was associated with older recipient age, longer posttransplant periods before onset, and use of calcineurin inhibitors.16

There are 2 important pathogenic mechanisms for postoperative development of lymphoma in kidney transplant recipients. One mechanism is primary EBV infection in strong immunosuppressed state. In the context of immunosuppression, transplant recipients who experience EBV infection may fail to mount an adequate EBV-specific immune response as a result of their lack of essential EBV-specific CD8+ T cells and insufficient production of anti-EBV nuclear antigen antibodies.17 In addition, this inadequate immune response could be exacerbated in recipients treated with T-cell-depleting antibodies.18 Another mechanism is lymphoproliferative dysregulation in a prolonged immunosuppressive state. In our study, 2 transplant recipients with EBV infection were diagnosed with PTLD. One of these patients was diagnosed at 7 months after transplant, and the other patient was diagnosed at 32 months (≥2 years) after transplant. The association between EBV and PTLD was not analyzed in this study because of the scarce number of cases and the lack of available EBV virology data for our participants. A study of pediatric kidney transplant in Japan noted that regular monitoring of EBV levels may have contributed to a lower incidence of PTLD in their study.19

The present study has several advantages. This is the first study on new malignancy in patients after kidney transplant in mainland China. The data that we have reported here have captured the most common risk factors related to malignancy, such as smoking habit, history of transfusion, recipient body mass index, and history of rejection. Compared with some previously published studies in which the immunosuppression regimens were modified during the course of treatment, the induction and maintenance of immunosuppression in our study were not modified significantly.

Our study has some limitations. First, the length of the follow-up period was brief, which may be the reason for the low incidence of posttransplant malignancies. Second, this was a retrospective single-center study with a relatively small group of enrolled participants. 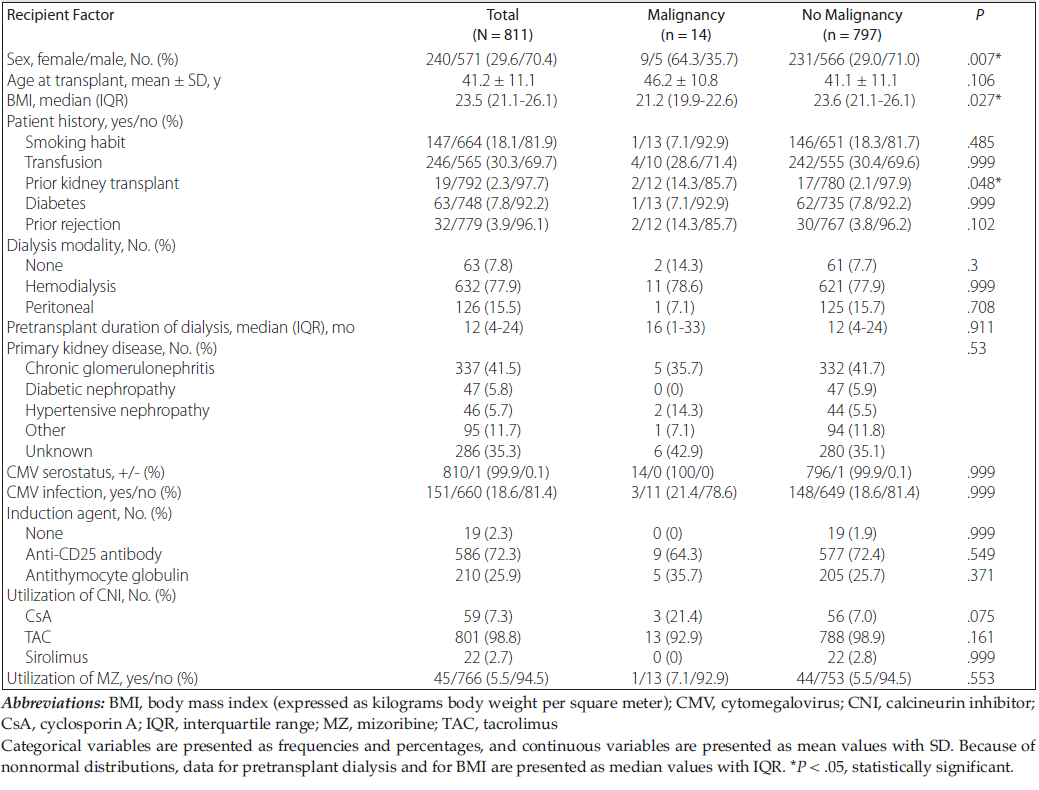 Table 1. Characteristics of Kidney Transplant Recipients Included in the Study 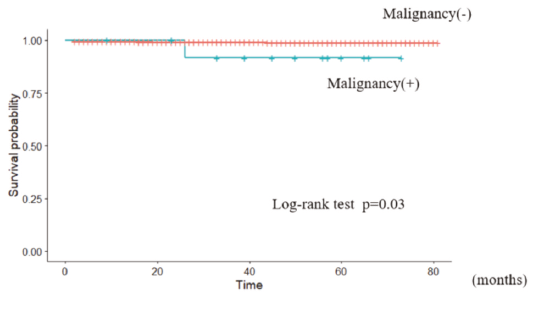 Figure 1. Kaplan-Meier Analysis of Patient Overall Survival Between Patients With and Without Malignancy 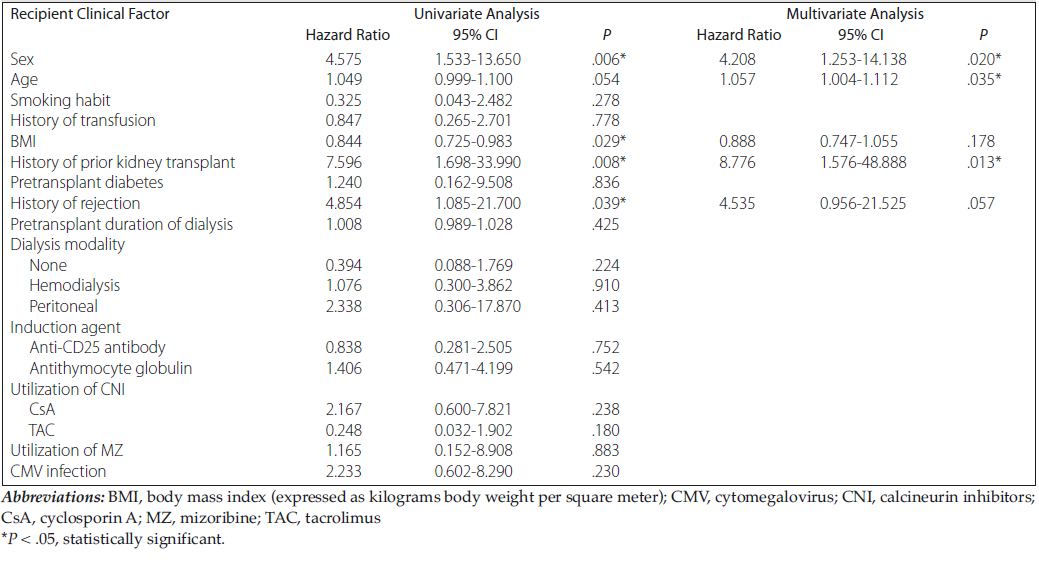