Controlled organ retrieval in donors after cardiac death has been increasing in Australia to help bridge the gap in demand and supply. Donation of organs from donors with acute aortic syndrome has been scarcely reported. Several concerns exist related to ischemic insults before retrieval from malperfusion, systemic inflammatory state in dissection, and involvement of donor organ vessels that may preclude the ability of surgeons to perform successful anastomosis of healthy vessels. Here, we have described a case in which both kidneys were successfully retrieved from a donor after cardiac death who had a type A0 aortic dissection. Despite radiological malperfusion and concern about vessel integrity, donor organs were unaffected and had immediate graft function.

Organ retrieval in donors after cardiac death (DCD) has been increasing in Australia to help bridge the gap in demand and supply. Donation of organs from donors with acute aortic syndrome has been scarcely reported. Retrieval may be precluded, as the patient may have uncontrolled cardiac arrest or have significant malperfusion of thoracic or abdominal organs. With procurement of the liver and pancreas in DCDs, there are specific predefined quality control criteria with lower tolerance for warm and total ischemia time.1 The kidney retrieval process in DCDs allows much longer ischemia times, and several extended criteria now exist to increase supply. A history of aortic dissection in an organ donor is sometimes considered a relative exclusion, with concerns about preexisting organ ischemia, infarction, and tissue integrity.2 The retrieval of kidneys from a donor with acute aortic syndrome extending to involve the renal arteries has not been previously described.

A 67-year-old female patient with past medical history of hypertension presented to the emergency department with left-sided facial droop and left-sided dense hemiplegia (0/5 power). An initial computed tomography angiography had demonstrated a right middle cerebral infarct. On further review of imaging results, evidence of dissection extending into the right common carotid was noted. Subsequent chest and abdominal com-puted tomography angiography imaging revealed a type A0 dissection, extending to the level of the renal arteries (Figure 1). The patient underwent emergency repair with Dacron interposition graft on cardi-opulmonary bypass circuit on day of presentation. Because of poor neurological recovery and previously documented wish for organ donation, the patient was considered for organ retrieval. The patient underwent organ recovery via the DCD pathway on day 5 of admission. Creatinine level was 62 ?mol/L before cardiac death. The donor was blood group O, with negative infection serology.

Rapid access was gained with midline laparotomy. After aortic cannulation, perfusion was implemented with premixed heparin (25?000 units). A supraceliac clamp was placed, and venting was performed via the abdominal inferior vena cava. Intraoperatively, both kidneys were well perfused. On back-table assessment, the false lumen was seen to extend and involve the left renal ostium with evidence of reentry fenestration. Partial thrombosis was noted of the false lumen. This was managed by resection of the dissected component (Figure 2). The right kidney orifice was not involved with the dissection. Both kidney allografts were successfully transplanted and demonstrated immediate graft function.

The retrieval of organs from patients with acute aortic syndrome has been scarcely reported. This is the first reported case of retrieval and successful utilization of donor kidneys from a patient with radiological evidence of malperfusion and aortic dissection.

There were several considerations in the retrieval of organs in the patient with history of aortic dissection. First is the concern about the overall quality of the organs. The pathophysiology of aortic dissection has complex physiological and biochemical processes, with activation of fibrinolytic and coagulative pathways. As a result, retrieved organs may have preexisting unwanted damage from the systemic inflammatory response. In addition, reduced arterial perfusion may occur to the organ via static or dynamic malperfusion. Denlinger and colleagues3 reported the successful retrieval of a lung in a DCD patient who had type A0 dissection. In their particular case, retrieval of abdominal organs was precluded because the celiac axis had false lumen take-off and evidence of established renal infarcts. However, the recipient of the lung transplant did not have any primary graft dysfunction.3 Similarly, in our patient, there was immediate graft function with no obvious deleterious effects despite the use of organs via the DCD pathway. Abu-Gazala and colleagues4 described similar findings with successful utilization of a DCD liver with type A0 aortic dissection extending into the visceral aorta. In their case, although the celiac and superior mesenteric arteries arose from the true lumen, there was significant true lumen compression.4

The second concern is technical considerations for safe retrieval and back-table preparation for appropriate utilization of the retrieved organs. In particular, the left kidney had preexisting computed tomography angiographic evidence of dissection extending into the left renal ostium. After retrieval, it is important to first assess the organ for any nonperfused segments, which may represent preexisting ischemia and can rule out utilization. Second, attention should then turn to the donor vessel. We discovered a large false lumen with partial thrombosis and a reentry fenestration at the ostium. This was managed by resection of the proximal renal artery and utilization of the remainder of the main renal artery for primary end-to-side anastomosis to external iliac artery (Figure 2). Attempting to utilize a carrel patch, as is common in renal allografts from deceased donors, could lead to extension of the false lumen or renal artery thrombosis. If the main renal artery is found to have dissection that extends a significant distance (or evidence of pathology in media-adventitial plane), options for reconstruction can include evacuation of hematoma with primary patchplasty of the artery using autogenous vein or bovine pericardium and interposition grafting (using autogenous or prosthetic). An example in a separate case is shown in Figure 3, where resection of the affected vessel is accompanied by tacking sutures to reoppose true and false lumen. This allowed sufficient length for implantation end to end onto the internal iliac artery.

Aortic dissection with involvement of visceral vessels should not be a contraindication to organ donation. Consideration of the anatomy of the dissection area, anatomy of the donor organ vessels, and options for repair may allow for increased utilization of precious organs that would otherwise be discarded. 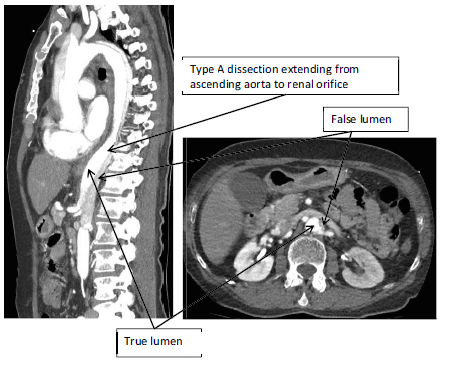 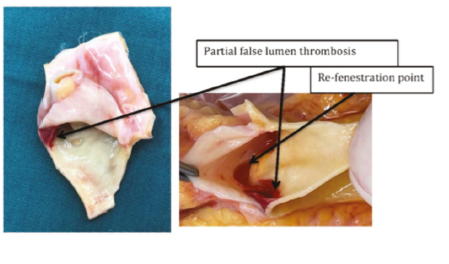