A 57-year-old male patient with end-stage renal disease secondary to long-standing diabetes mellitus type 1 and chronic hypertension, on hemodialysis for 2 years, was matched successfully for en bloc pediatric kidneys from a 15-month-old brain-dead donor. The donor weighed 11.5 kg, and each of the pediatric en bloc kidneys was about 6.0 cm × 3.5 cm with no surgical damage. On the back bench, the suprarenal aorta and the inferior vena cava were sutured closed, and the infrarenal aorta and inferior vena cava were prepared for anastomosis as described earlier.2

The right external iliac artery and donor inferior vena cava of the en bloc kidneys were again clamped. The arterial anastomosis was taken down, and this showed a completely obstructive intimal flap that prevented any blood flow to the en bloc kidneys, extending both proximal and distal to the arteriotomy by approximately 2 cm on either side. The donor inferior vena cava was divided leaving a short venous stump attached to the recipient right external iliac vein. The en bloc kidneys were explanted and flushed immediately with cold heparin-saline solution available on the table while cold University of Wisconsin solution for flush was set up on the back bench. Simultaneously, immediate assistance from an additional transplant surgeon was sought, who flushed the kidneys with cold University of Wisconsin solution on the back table followed by static cold storage at 4 °C. The right external iliac artery was then repaired by tacking the proximal and distal intima with multiple interrupted 6.0 Prolene sutures. Gore-Tex polytetrafluoroethylene (PTFE) patch angioplasty was performed, and the arterial clamps were removed. However, inadequate distal arterial flow was noted with absent right femoral arterial pulsations and indicated persistent arterial dissection.

Vascular surgery consult was sought, and additional heparin (3000 U intravenously) was administered. After proximal and distal control of the artery, the PTFE patch was removed and the arteriotomy was extended. This showed external iliac artery dissection with thrombosis in the false lumen that was compressing the true lumen. The intimal dissection with intimal flap and a thrombus in the true lumen extended to the distal external iliac artery. Balloon thrombectomy was performed along with endarterectomy of the intimal flap down to the distal right external iliac artery. The distal intima was tacked with running 5.0 Prolene suture. A 9 × 40-mm Protege self-expanding Nitinol stent (ev3 Endovascular) was deployed in the distal external iliac artery (Figure 1). The arteriotomy was closed with Dacron patch angioplasty. An intraoperative right lower extremity angiogram was performed and showed patent distal arteries.

The en bloc pediatric kidneys were thoroughly inspected and appeared well flushed without any discoloration. The decision was made to reimplant the en bloc kidneys. The donor infrarenal aorta was anastomosed to an opening in the Dacron patch, and the donor inferior vena cava was anastomosed to the venotomy in the external iliac vein. When the clamps were removed, the pediatric en bloc kidney allografts perfused well and immediate diuresis was observed. The adjoined walls of both ureters were put together with running 6-0 polydioxanone suture. An opening was made in the bladder, and the double-barreled ureters were anastomosed to the bladder over 2 ureteric stents. The total cold ischemia time  was 22 hours 32 minutes. The total warm ischemia time for the initial and subsequent implant was approximately 60 minutes.

Renal function was excellent, with the serum creatinine decreased to 2 mg/dL by postoperative day 5. Bilateral dorsalis pedis and posterior tibial arterial signals were serially followed along with ankle brachial pressure index, which were satisfactory. The right lower extremity did not develop any sensory or motor deficits.

The patient was discharged on postoperative day 8 on aspirin (81 mg/d) and clopidogrel (75 mg/d).

The patient had excellent preservation of the renal allograft function for a total of 4 years posto­peratively. Follow-up nonvascular studies were consistent with normal lower extremity perfusion with an ankle brachial pressure index of 0.82 for the right and 0.91 for the left. Five years postoperatively, the patient developed new-onset uremia and creatinine increased (Figure 2). Work-up, including renal ultrasonography and computed tomography (CT) angiogram, was consistent with patent transplant vasculature with mildly elevated resistive indexes on Doppler examination. His clinical picture was consistent with loss of allograft function secondary to chronic antibody-mediated rejection confirmed on biopsy. The patient was not a retransplant candidate. He was restarted on hemodialysis, which the patient has tolerated, and his immunosuppressive therapy was tapered over the course of months and then stopped.

Transplant-associated iliac artery dissection is often attributed to the traumatic handling or clamping of atherosclerotic vessels. This iatrogenic trauma causes the disruption of the arterial intima and allows for a false lumen and decreased distal flow, which may lead to graft dysfunction,6-8 limb ischemia,9,10 or both.8,11,12 Given the devastating potential for graft or limb loss, the swift diagnosis and management of this complication, despite its rarity, are imperative.

Transplant-associated external iliac artery dissection may be diagnosed intraoperatively or postoperatively. Intraoperative detection is most common and has been reported after acute decreases in distal arterial pressures during continuous intraoperative monitoring10 or the absence of distal pulsations after arterial camp removal.9 At our center, we routinely check distal iliac pulsations or Doppler after graft reperfusion. This practice, in addition to the lack of pediatric en bloc reperfusion, allowed for immediate detection of the dissection. Table 1 summarizes the literature regarding iliac artery dissection identified intraoperatively.13-18

Postoperative diagnosis may be early or delayed. Tsai and colleagues reported dissection presenting as early as 30 minutes after surgery with acute onset of anuria.12 Other reported cases of external iliac artery dissection were diagnosed in the early postoperative period from postoperative days 1 to 9.7,8,11 These often were identified after new-onset anuria or hypertension and confirmed with renal ultrasonography followed by arteriogram.15 Detection as late as 6 months to 2 years after surgery has been reported.6

The management options reported for external iliac artery dissection depend on the timing of diagnosis, degree of symptoms, and surgeon preference. Documented interventions include synthetic graft,19 donor iliac allograft,17 endovascular stent,6,9,11 arterial bypass,7-9 primary vascular repair,12 and expectant management.7,8 Primary vascular repair and endar­terectomy with successful outcomes have been reported.12 However, most cases require more invasive approaches such as synthetic graft or stent placement.10,19 In our case, we began with the most minimally invasive intervention of primary vessel repair and tacked the distal intimal layer to prevent false lumen propagation. After this failed, we proceeded with an endarterectomy and eventually intravascular stent placement.

Methods to avoid transplant iliac arterial dissection include the use of soft arterial clamps and avoidance of clamping over areas of dense atherosclerosis.17 Given the rates of atherosclerotic disease, kidney transplant recipients at our facility undergo CT imaging in part to evaluate the iliac vessels for preoperative planning. Our patient’s CT scan revealed mild aortic atherosclerotic disease, but both external iliac arteries were mostly free of calcifications. Finally, if dissection does occur, then immediate flush of the allograft with cold heparinized saline followed by University of Wisconsin solution could prevent micro-thromboses formation and help preserve the graft during dissection repair.

Dissection of the external iliac artery as a complication of a pediatric en bloc kidney transplant is an extremely rare occurrence. Routine intraoperative Doppler examination after graft perfusion and a vascular examination of the lower extremity postoperatively can help in early detection. In this case, primary repair with vascular stent placement was performed to manage the dissection of the external iliac artery and allowed subsequent successful reimplant of the pediatric en bloc kidneys.

From the 1Hume-Lee Transplant Center and the 2Division of Vascular Surgery, Virginia Commonwealth University, Richmond, Virginia, USA; and the 3NIMS University, Jaipur, India
Acknowledgements: The authors have not received any funding or grants in support of the presented research or for the preparation of this work and have no declarations of potential conflicts of interest.
Author contributions: All authors designed the study, acquired the data, drafted and critically revised the manuscript, and provided approval of the final manuscript draft.
Corresponding author: Amit Sharma, Division of Transplantation Surgery, Virginia Commonwealth University, PO Box 980057, Richmond, VA 23298-0057, USA
Phone: +804 828 2461
E-mail: amit.sharma@vcuhealth.org 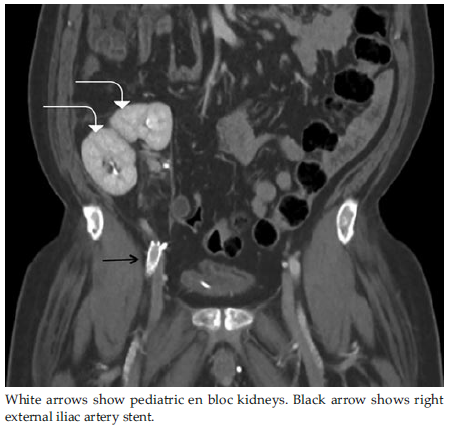 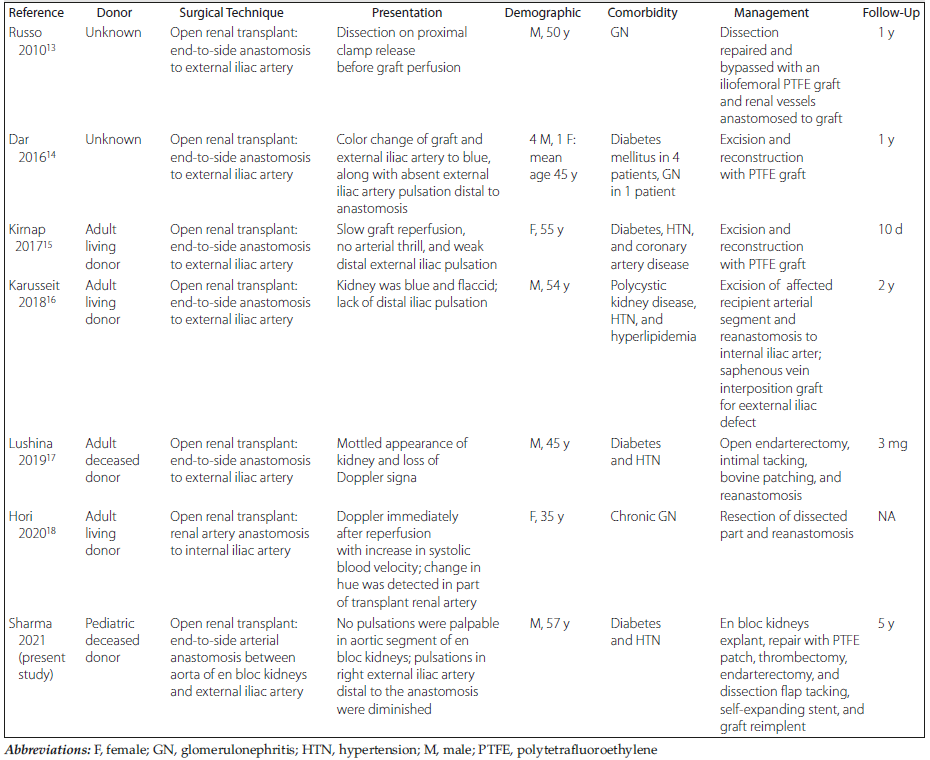