The triple-combination cystic fibrosis transmembrane conductance regulator modulator elexacaftor/-tezacaftor/ivacaftor is known to improve lung function and have extrapulmonary benefits in people with cystic fibrosis. However, there is limited evidence for its use in patients with cystic fibrosis after lung transplant, where the donor lung expresses normal levels of the cystic fibrosis transmembrane conductance regulator. We describe the use of elexacaftor/tezacaftor/ivacaftor as a bridge to potential lung retransplant in a 37-year-old man with cystic fibrosis and chronic lung allograft dysfunction. Although forced expiratory volume in 1 second did not improve, the patient had decreased sputum volume, no pulmonary exacerbations of cystic fibrosis, and no longer required continuous antibiotic therapy. Pancreatic function, revised Cystic Fibrosis Questionnaire scores, sinus symptoms, weight, and corticosteroid dependence significantly improved. There were no reported side effects attributable to elexacaftor/tezacaftor/ivacaftor. However, the patient exhibited declined renal function, which had been initially attributed to lability in cyclosporin levels but which were corrected after lithotripsy for renal calculi. Triple-combination modulators of the cystic fibrosis transmembrane conductance regulator may offer benefits to carefully selected individuals awaiting retransplant, balanced against the risk of worsened immunosuppressant level control.

The main indication for the triple-combination cystic fibrosis transmembrane conductance regulator (CFTR) modulator elexacaftor/tezacaftor/ivacaftor (ELX/TEZ/IVA; Kaftrio, Vertex Pharmaceuticals) is to improve the function of the cystic fibrosis (CF) lung, although it also demonstrates extrapulmonary benefits in people with CF. However, its use posttransplant in individuals with CF, where the donor lung expresses normal CFTR, is controversial, and there is limited evidence for its use. Here, we describe the use of ELX/TEZ/IVA as a bridge to potential lung retransplant in a patients with CF and chronic lung allograft dysfunction.

Before transplant, he expressed no preformed HLA antibodies and was cytomegalovirus negative and Epstein-Barr virus positive, with predicted total lung capacity of 7.3 L. The donor was cytomegalovirus and Epstein-Barr virus positive and had predicted total lung capacity of 7 L. Lung transplant was performed on veno-arterial extracorporeal membrane oxygena-tion with a bypass time of 501 minutes and warm ischemia time for the right and left lungs of 84 and 66 minutes, respectively. The patient was weaned from extracorporeal membrane oxygenation imme-diately posttransplant. Induction immunosup-pression with 3 doses of rabbit antithymocyte globulin (1.5 mg/kg each) was given posttransplant. He was extubated on day 2 and discharged home 3 weeks later. Immunosuppression was initiated with cyclosporin, azathioprine, and prednisolone.

The FEV1 ranged between 89% and 73% predicted in the 12 months after transplant. The patient showed good exercise tolerance, and his weight improved (BMI of 21.7). However, after this period, FEV1 declined steadily to 15% to 16% predicted despite adequate serum cyclosporin levels and absence of acute infection. Computed tomography confirmed mosaic pattern regional air trapping consistent with obliterative bronchiolitis; poor lung function precluded lung biopsy. He required continuous oxygen and intravenous antibiotic therapy, and he lost weight (BMI of 18.8). At 24 months posttransplant, he was diagnosed with stage III chronic lung allograft dysfunction and listed for retransplant.

In view of his deteriorating clinical condition, Kaftrio (elexacaftor 200 mg, tezacaftor 100 mg/day, ivacaftor 150 mg twice per day) was commenced under inpatient supervision shortly after it became available through the National Health Service in September 2020 (at 31 months posttransplant). For subsequent progress, see Figure 1.

Although FEV1 did not improve and the patient continued to require supplemental oxygen, sputum volume decreased, he had no pulmonary exacerbations, and he no longer required permanent antibiotic therapy. Sinus symptoms (SNOT-22 score) improved from 53 to 18. He no longer required insulin and demonstrated adequate glycemic control (continuous glucose monitoring normoglycemia rate improved from 71% to 89%). Pancreatic enzyme use decreased by 15%, with improved stool frequency and weight (BMI of 19.6). Prednisolone was reduced in steps to 10 mg/day. At 6 months, the patient showed significant improvements in revised Cystic Fibrosis Questionnaire scores for respiratory (6 to 83), physical (0 to 16), health (0 to 33), and digestive (22 to 100) domains. No side effects attributable to ELX/TEZ/IVA were reported.

Lability in serum cyclosporin levels (25 to 196 μg/L) was observed, but no patient-reported side effects attributable to cyclosporin toxicity were recorded. Serum creatinine increased from a baseline of 87 to 203 μmol/L, and there was a decrease in estimated glomerular filtration rate of >90 to 35 mL/min/1.73 m2. Therefore, the cyclosporin dose was reduced initially from 100 mg twice per day to 50 mg to achieve more appropriate serum levels. Renal function decline was also attributed to comorbid renal stones without evidence of hydronephrosis or urinary sepsis. Successful extracorporeal shockwave lithotripsy was carried out, and cyclosporin was changed to everolimus (therapeutic concentration within 3-8 ng/mL). Renal function improved to a stable estimated glomerular filtration rate of 52 mL/min/1.73 m2.

In this report, we showed that, although there was no improvement in spirometry, commencing ELX/TEZ/IVA offered extrapulmonary benefits in a lung transplant recipient awaiting retransplant, leading to significant improvements in his quality of life and nutritional state. Indirect benefits due to prednisolone reduction, weight gain, and reduction in CF exacerbations may also contribute to improved health in posttransplant individuals, in keeping with the experience of others taking other CFTR modulators after lung transplant,1 where low BMI is associated with poorer outcomes.2

Furthermore, improvements in revised Cystic Fibrosis Questionnaire respiratory domain score, exacerbation frequency, and mucus volume suggested that ELX/TEZ/IVA did have some effects on lung health. Other CFTR modulator combinations have been shown to reduce systemic inflammation in people with CF,3 and this, along with its benefits in glycemic control and BMI, may explain its apparent effect on respiratory status despite the expression of normal CFTR protein in the donor lungs.

However, this positive experience is not shared universally within the literature.4 In our case, labile serum calcineurin inhibitor (CNI; cyclosporin) levels and deteriorating renal function were seen early after initiation of the CFTR modulator, requiring close monitoring and dose adjustment. This fluctuation in immunosuppressant levels has been reported elsewhere.5 Other centers have reported more stable CNI levels using tacrolimus6 with similar weight, sinus symptom, and gastrointestinal benefits. Use of mechanistic target of rapamycin inhibitors such as everolimus as a renal sparing strategy, allowing CNI dose reduction, is well-described and commonly administered after solid-organ transplant.7

The relentless clinical decline in our patient with no other treatment options threatened his prospect for a lung retransplant. The use of ELX/TEZ/IVA offered clinical stability, allowing the patient to remain listed for donor organ allocation. At this late stage in our patient’s journey, strategies to minimize drug adverse events and the risk of extrapulmonary organ dysfunction took precedence over protecting the failed lung allograft from further alloimmune injury.

The median wait list time for lung transplant in the United Kingdom is 14 months.8 As highlighted in a recent review, triple-combination CFTR modulators may offer benefits to carefully selected individuals awaiting retransplant, balanced against the potential risk of worsened immunosuppressant level control.9 Furthermore, use of ELX/TEZ/IVA may positively influence the decision to refer for transplant in patients with CF.10 However, in agreement with a recent literature appraisal, we advocate caution until more data are available on the use of CFTR modulators in this population.11 Clinicians should be aware that close pharma-covigilance and frequent monitoring are required in these cases, and inpatient monitoring at the start of CFTR modulator treatment may be advisable. Long-term follow-up in a large cohort is needed to further confirm the safety and efficacy for triple-combination CFTR modulators in this population.

From the 1Adult CF Unit, Liverpool Heart and Chest Hospital, Liverpool; the 2Institute of Life Course and Medical Sciences, University of Liverpool, Liverpool; the 3Institute of Infection and Global Health, University of Liverpool, Liverpool; and the 4Heart and Lung Transplant Centre, Wythenshawe Hospital, Manchester, United Kingdom
Acknowledgements: The authors have not received any funding or grants in support of the presented research or for the preparation of this work and have no declarations of potential conflicts of interest.
Corresponding author: Thomas Simon FitzMaurice, Adult CF Unit, Liverpool Heart and Chest Hospital, Thomas Drive, Liverpool, L14 3PE, UK
Phone: +44 (0)151 254 3055
E-mail: thomas.fitzmaurice@lhch.nhs.uk 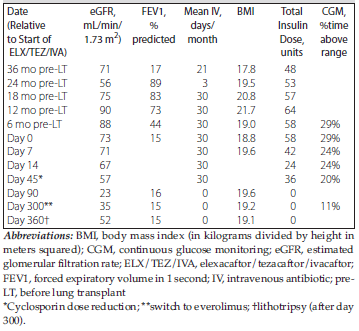