According to the World Health Organization, despite advances in hepatology, treatment remains problematic for patients with acute liver failure (ALF), in both peacetime and emergency situations.1 A primary element of this persistent problem is that most cases of severe liver lesions are complicated by the subsequent rapid onset of ALF. This likelihood of poor outcomes in patients with chronic liver disease is further aggravated by the substantial risk of death from liver failure and cirrhosis (approximately 26 000 deaths per 3 million population, for patients with chronic liver disease in developing countries).

Acute liver failure is characterized by an accelerated course of liver disease that, without appropriate treatment, often leads to the death of the patient. The mortality rate remains high for this category of patients (65%-85%),2 and liver transplant has been the only effective treatment. In the past decade, a new treatment method has gained favor; ie, advances in the field of cellular and tissue transplantation have led to its application in cases of severe liver lesions, metabolic disorders, and various other human disorders.3 The motivation to explore the potential of cell transplant as a priority treatment for patients with chronic diseases of vital organs was the result of the ongoing and worsening shortage of donor organs, the high cost of organ transplant, the danger and likelihood of complications, and the high risk of disability and death. Cell transplant therapy has facilitated new aspects of treatment that could compensate for the missing specialized cellsin the damaged organs, to increase the pool of functioning cells and to activate the patient’s own physiological systems to induce regeneration and proliferation in the surviving cells of the damaged organ.4

All over the world there are research projects focused on early diagnosis and improvement of treatment methods for patients with ALF. Cell transplant has a number of advantages compared with organ transplant. Cell transplant offers greater safety than organ transplant, reaches a greater number of patients, allows for a dramatic reduction in immunosuppressive regimens, and has a lower cost. Presently, available data on pathophysiological mechanisms of ALF development and the results of its treatment suggest the need to revise the traditional tactics for treatment of this pathology.5

Hemodialysis, plasma ultrafiltration, and hemad-sorption are all important elements of supportive therapy but, unfortunately, do not significantly reduce mortality.6 Liver transplant has been established as the only effective treatment for end-stage liver failure. However, each year many patients die while waiting for transplant surgery, and the shortage of donor organs is the major limiting factor for transplant surgery. Therefore, hepatocyte transplant is presently favored as the only effective alternative to liver transplant and may also be used as an interim treatment during the search for a histologically compatible donor liver. The use of xenogeneic and allogeneic hepatocytes for transplant is emerging as a promising option for the cell transplant method of treatment of ALF.7

The aim of our study was to analyze the liver tissue morphology dynamics in experimental animals with ALF in response to a combined application of transplanted cultured embryonic hepatocytes (CEH) and the hepatoprotective drug Erbisol.

Erbisol is a drug that combines hepatotropic and immunocorrective properties; ie, Erbisol was designed as a single solution to fulfil multiple aspects of conventional ALF therapy. Erbisol was administered intramuscularly daily at a dose of 0.08 mL/kg. We used an enzymatic-mechanical method of initial tissue processing with minimal damage to cultured embryonic hepatocytes to obtain CEH. This method has been designed to increase the output of viable CEH, improve the morphological-functional properties of the procured hepatocytes, and reduce the overall time from procurement to the subsequent culturing procedure. Transplant of CEH to the recipient animal was performed intraperitoneally at a dose of 50 million (0.5 × 108) cells. Immunosup-pression was not performed.

We performed a histological examination of the liver tissue at 7 days and 21 days after the operation to analyze the cell proliferation characteristics and the presence and rate of regeneration by perisinusoidal cells, bile ducts, and afferent and efferent vessels of the liver.

In the intact rats (group 1), it could be noted that the arrangement of hepatocytes was clear, with radial beams around the central veins, thin walls of the vessels of the central and portal tracts, and there was no infiltration of connective tissue or the parenchyma. Animal liver samples showed that the structure of the organ was preserved, the lobular structure was not clearly expressed, liver plates were placed radially; central veins, branches of portal vein, and sinusoids showed moderate blood congestion; interlobular connective tissue was moderately expressed; and there was a characteristic polymorphism of hepatocytes (light and dark), with a large number of light hepatocytes present in peripheral parts of lobules. Microscope inspection of tissue samples revealed that the cytoplasm of hepatocytes was basophilic, the nuclei were round and each was located in the center of a cell, and the walls of bile ducts were covered by cuboidal epithelium. Stellate endotheliocytes (Kupffer cells) were detected between hepatocytes (Figure 1).

In animals with ALF (group 2), on day 7 there was centrilobular necrosis of hepatocytes, which affected various areas of the liver lobule in these animals. The structure of rat liver tissue showed significant destructive-dystrophic changes on day 21 of the experiment, which was observed as an increase in the area of necrotic tissue (10%-15% of the total area of the examined liver). Destructive changes of hepatocytes were accompanied by an increase in mesenchymal-cellular reaction, especially noticeable in the areas of portal tracts, where mononuclear accumulation was found. We noted that the hepatocytes did not form trabeculae and were haphazardly dispersed. We also observed sharply narrowed sinusoids, as well as an expansion of large portal tracts due to stroma overgrowth and subsequent collection of inflammatory infiltrate. Some portal tracts showed necrotic vascular changes, and the walls of these vessels were poorly defined. Destruction of bile ducts was noted. The hepatocytes showed signs of fatty degeneration, hydropic dystrophy, and inflammatory infiltrates (Figure 2). Our experimental model showed morphological acute damage to the liver structure that was histologically consistent with ALF damage.

In animals with ALF that were treated with CEH (group 3), on day 7, the hepatocytes showed preserved focal dystrophy and necrosis, and the liver vessels showed pronounced congestion in sinusoids and central veins.

In most of the hepatocytes, the initial reparative processes occurred in the context of cell swelling. Activity of fibroblasts and mononuclear cells was expressed. Nuclei of different sizes were clearly seen. Sinusoids were irregularly dilated. There was a significant improvement in the morphological appearance in the liver by day 21 of the experiment and consistent with the livers of the rats in group 1. Regenerative processes were focal, sinusoid lumen was irregularly dilated, and venous vessels were similar.

For the rats with ALF treated with CEH transplant (group 3), the hyperplasia we observed in the sinusoidal elements was irregular. There was a much higher level of expression of the reparative processes in the livers of rats from group 3 compared with the group without treatment (group 2) (Figure 3). These observations suggest that CEH transplant promoted restoration of the damaged liver tissue could have a favorable effect to impede the course of ALF, perhaps to an outcome of complete recovery.

For the healthy rats treated with Erbisol (group 4), the morphology of the liver on day 7 was very similar to liver morphology of the rats of group 1. By day 21, most of the hepatocytes showed hyperchromic, enlarged nuclei, with many binucleated forms; the cytoplasm stained irregularly, without signs of dystrophy; and the gross structure of the lobules was clearly visible. The hepatic vein showed signs of congestive venous plethora hyperplasia of sinusoidal endothelial cells was expressed, and there were hepatocytes of different sizes. Therefore, we conclude that the drug Erbisol, which has immunomodulatory and stimulatory regenerative properties, has no toxic effect on hepatocytes.

In animals with ALF (group 5) when Erbisol was injected by day 7, necrotic-dystrophic processes still prevailed and showed diffuse characteristics (Figure 4). Lumen of sinusoids was not visible; lumen of central veins were empty or contained single erythrocytes. On the background of dystrophic processes, reparative processes were evident in hepatocyte nuclei, expressed in their hyperchromia, anisochromia, and larger size of nuclei, which indicates accumulation of chromosomal material for further reparative processes with cell division.

The dystrophic processes partially persisted, and blood flow increased, which was apparent in venous full blood flow by day 21. The state of cell cytoplasm improved, indicating intracellular accumulation of glycogen. The number of binuclear hepatocytes, hepatocytes per unit tissue area, and the variety of hepatocytes shapes and sizes increased. Lumen of sinusoids was indistinct, and hepatocytes still showed signs of protein dystrophy and fat dystrophy (Figure 5). We noted a positive influence of Erbisol on the function of preserved hepatocytes to stimulate regeneration of hepatic tissue and contribute to restoration of cell function.

Optimal results were observed in the group of animals with ALF that were treated with the combination of CEH and Erbisol on day 7 and day 21 of the study (group 6). Sinusoidal capillary lumen and bar structure were distinct. Hyperplasia of sinusoidal endothelial cells was preserved. For this combination treatment (CEH with Erbisol), there was a tendency toward restoration of the liver structure, and in the early stages of treatment the structure of the organ was similar to that of the group of intact animals (group 1), including radial placement of hepatic bulks, moderate blood congestion of central veins, branches of portal vein, sinusoids, a distinctive polymorphism of hepa-tocytes (light and dark), and many light hepatocytes in the peripheral parts of lobules (Figure 6).

Thus, animals with ALF showed pronounced morphological changes in the liver, which was caused by a widespread necrotic process and a pronounced inflammatory reaction. When ALF animals were treated with CEH transplant, we observed a positive dynamic in the form of regeneration of liver parenchyma cells and reduction of the inflammatory reactions, which were less pronounced in the group of animals treated with Erbisol. In the rats that received the combination treatment of CEH and Erbisol (group 6), the effects of potentiation were evident, as seen in the intensive proliferation of hepatocytes, the hypertrophy and polyploidization of hepatocyte nuclei, and the earlier, marked restoration of structure and mass of the damaged liver.

Combined therapy of CEH allotransplant and administration of the hepatoprotective drug Erbisol promoted effective liver regeneration and stimula-tion of the reparative process, and these results justify the use of this combination for treatment of ALF. In light of the favorable results of our experimental study in the treatment of ALF by combination of Erbisol and CEH transplant, we advise that this method should be considered for clinical practice. 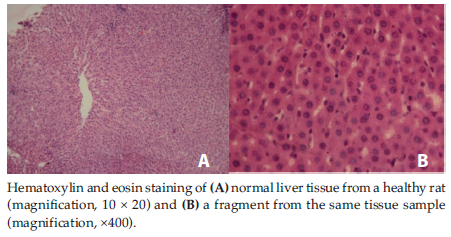 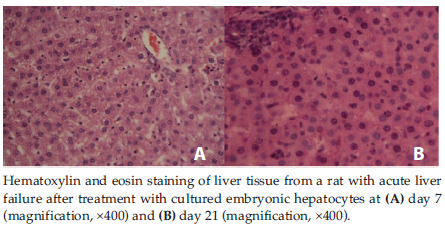 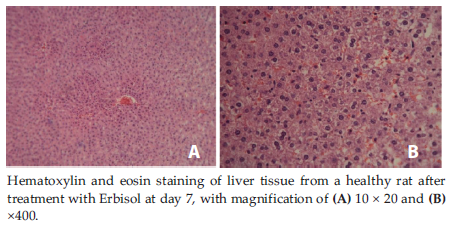 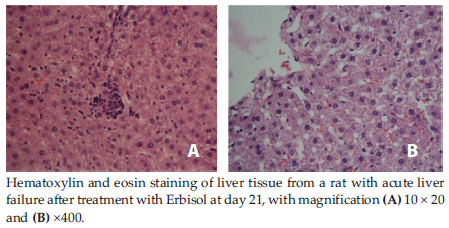 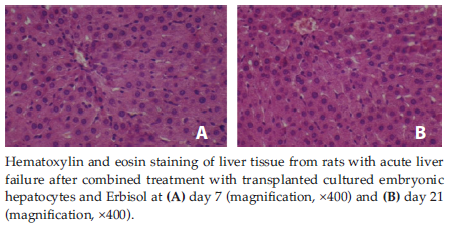 Figure 6. Morphology of Liver Tissue From Rats With Acute Liver Failure Treated With a Combination of Transplanted Cultured Embryonic Hepatocytes and Erbisol (Group 6)