Around 3 million people in the United Kingdom have chronic kidney disease.1 The UK annual mortality associated with kidney failure is 100 000 deaths per year; this corresponds to 10 people every hour.1 In Europe, 50% of patients with end-stage renal disease (ESRD) die within 5 years as a result of complications.2

The high mortality associated with ESRD can be significantly reduced by kidney transplantation.3,4 However, the increased incidence of ESRD has further widened the disparity between the number of transplant kidneys available for donation and their high demand.5 There are presently 6000 patients on the UK transplant waiting list with about 10 patients added daily.6 The average UK kidney transplant wait time is about 30 months.7 Every day, a patient with ESRD will die waiting for a transplant, and only 1 in 4 will be able to receive a suitable kidney transplant.1 The prevailing uncertainty and the unprecedented reduction of transplant activity due to the COVID-19 pandemic have further increased the shortage of organs.8

Adding to the problem, about 7% to 8% of the grafts are lost in the first 3 months after transplant.9 One-third of this loss is due to vascular complications.10 To counter graft disparity, it is paramount to ensure the survival of the transplanted organs.11 Early detection of vascular complications allows an opportunity for a prompt intervention that is vital to reducing graft loss. A delay in the diagnosis will result in thrombosis of the graft after which it is unsalvageable.12 The early diagnosis can be challenging due to the absence of consistent para-meters that can be used to assess graft function. Patients with compromised graft perfusion are clinically asymptomatic in the initial phase. Similarly, other indicators of graft function, like a drop in serum creatinine13 and production of urine,14 are unreliable.

The implantable Doppler probe is a vascular monitoring device with the ability to provide continuous, easily interpretable, and reliable audible Doppler signals that can be used to monitor blood flow to the graft.12 It is used postoperatively to monitor the patency of vascular anastomosis and graft perfusion in cardiovascular, liver transplant, plastic, and breast reconstructive surgeries.18-21

On the same principle, this device may have a possible role in the early identification of vascular complications critical to reducing graft loss.22 In this study, we aimed to evaluate the usefulness of the implantable Doppler probe as a vascular monitoring device in kidney transplant patients.

Ethical approval (reference No. CA_2019_20_209) was obtained from the Research and Development Department of the University Hospitals Plymouth NHS Trust where data compilation and analysis were conducted.

The implantable Doppler probe (Cook-Swartz) consists of a 20-MHz crystal transducer that is attached to a silicone cuff.23 During kidney transplant surgery, the probe is attached to the renal artery (Figure 1). The scientific basis of the probe is provided by the transducer that converts the kinetic energy of the pulsatile blood flow in the vessel into electric energy. A wire connects the probe to the external monitor that translates this energy into audible Doppler signals (Figure 2). The continuous signals represent forward systolic shifts and are used to monitor blood flow to the graft. Impairment of blood flow to the graft results in the cessation of audible signals and is interpreted as graft hypoperfusion. Cessation of audible signals allows an early warning sign warranting immediate assessment if the patient is still in the operating theatre or further investigations if in the transplant ward. Kidney transplant recipients at our center who receive a postoperative implantable Doppler probe are moni-tored continuously for the first 4 hours from the graft perfusion in the operating theatre and recovery. After patients are shifted to the transplant ward, they are monitored intermittently in the next 72 hours depending on their graft function. The wire con-necting the probe to the monitor is disengaged by gentle traction after 72 hours; however; the cuff is left around the vessel.

All deceased or living donor kidney transplant recipients who had the implantable Doppler probe monitoring or who had standard care clinical observation at our center during the study period were included in the study. However, patients who received a graft with 2 or more donor renal arteries evident at the time of surgery were excluded. The eligibility criteria were applied to maintain standardization of the data collection by selecting data only from single vessel transplant kidneys. In addition, multiple renal artery grafts, compared with single renal artery grafts, are associated with a higher risk of posttransplant complications.24

Data of all eligible patients were collected retrospectively through Vital Data. The Vital Data database is a prospectively maintained and audited database system used in the NHS for management of patients with chronic kidney disease.25 Individual medical notes of patients were consulted for further clearance. The data collected included demographic characteristics and surgical outcomes after kidney transplant surgery (Table 1).

The extracted data were anonymized, transcribed, and processed in a Microsoft Excel worksheet. Demographic characteristics of kidney transplant recipients in both groups were summarized using descriptive statistics such as means and standard deviations. Posttransplant surgical outcomes are expressed in percentages.

Demographic characteristics were compared between groups to assess whether they were identical. Similarly, surgical outcomes in both groups were compared to assess whether there were any substantial changes in surgical outcomes in kidney transplant recipients who had postoperative implantable Doppler probe monitoring versus standard care clinical observation.

We also calculated relative risk (RR) to describe the strength of the relationship between the surgical outcomes and the application of implantable Doppler probe monitoring.

Comparison of the number of departmental ultrasonographic scans requested postoperatively in both groups
Among the 194 participants in group 1, there were 138 (71.1%) departmental ultrasonographic scans required in the first 24 hours versus 108 scans (83.7%) required among the 129 participants in group 2. Thus, there was a 12.6% reduction in group 1. The relative risk was 0.84. Over the next 48 and 72 hours, there was only a slight difference in the number of departmental scans requested for both groups.

Our study investigated the usefulness of an implantable Doppler probe in kidney transplant patients, with the aim to assess its role as a vascular monitoring device and in the identification of vascular complications in the postoperative kidney transplant setting. To assess the benefits of an intervention, it is paramount to select appropriate outcome measures that can be compared between groups. There are multiple risk factors for delayed graft function in kidney transplant recipients.29 Therefore, it was not considered as a surgical outcome to prevent the introduction of confounding factors in the study.

The results revealed that in group 1 more early vascular complications were reported and fewer departmental ultrasonographic scans were requested in the first 24 hours posttransplant compared with results shown in group 2. Application of the implantable Doppler probe may have played a possible role in the identification of a higher number of vascular complications. Similarly, the continuous monitoring allowed by the probe may have led to the satisfaction of clinicians who requested fewer departmental ultrasonographic scans. A recent study conducted in London involving the use of the probe in 15 consecutive living donor kidney transplant recipients reported implantable Doppler probe as a successful additional method of monitoring blood flow to the graft.30 A reliable vascular monitoring device could reduce the financial costs to health care systems and allow radiology resources to be diverted to other emergencies.

We did not experience any immediate com-plications related to the monitoring device, and all probes were removed easily. This is concordant with the findings of an earlier study.29 However, a recent case report from Canada described a free flap anastomotic leakage from the traction applied to disengage the probe.31 Such an incident would be catastrophic in kidney transplant recipients. Late complications with the use of the probe, namely vessel constriction at the probe application site, can increase tension on the anastomosis, and false-negative detection rates require evaluation by further prospective studies.

The monitoring device only offers an indirect assessment of the venous return as the probe is attached to the renal artery. The renal vein, particularly on the right side, is thin walled and carries a risk of avulsion during disengagement of the probe.

Our study is the largest reported series of kidney transplant patients with application of an implantable Doppler probe. Although the results were suggestive of the utility of the monitoring device, this study had limitations. Over the 5-year data collection period, there were chances of discrepancy in the recorded data shown in the patient notes. There was also an inherent selection bias in this study as all the cases in each group were operated by the same pair of surgeons. Only half of the transplant surgeons in our center used the monitoring device, and surgeon crossover critical for the study was absent. Similarly, 72% (68/95) of the total living kidney donor transplant recipients in our study were in group 1. A kidney transplant from a living donor as opposed to a deceased donor is of high quality and can have fewer complications.32 The effects of the surgeon’s expertise and the type of kidney donor on the differences shown in surgical outcomes between the 2 groups cannot be ruled out.

The primary purpose of this study was to inform the local practice and generate preliminary infor-mation for future clinical studies. Because this study was undertaken in kidney transplant patients in the NHS hospital settings, the findings carry the potential to be assessed further in other units.

An implantable Doppler probe allows continuous blood flow monitoring of the transplanted kidney. This device may be used as an additional adjunct to the departmental ultrasonographic scan for graft monitoring in kidney transplant recipients. Further controlled studies are warranted to evaluate this device in clinical practice. 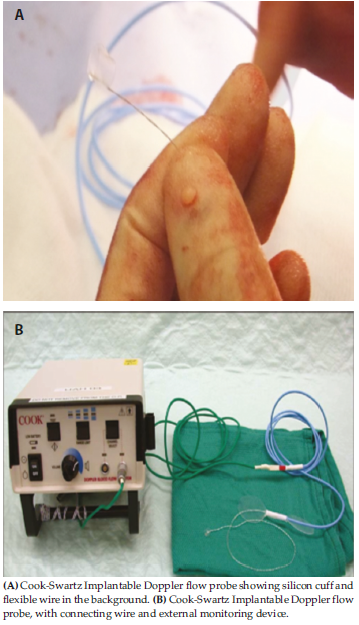 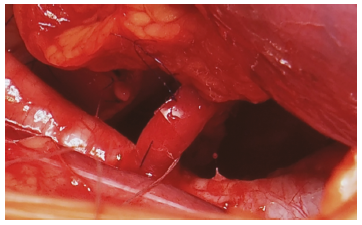 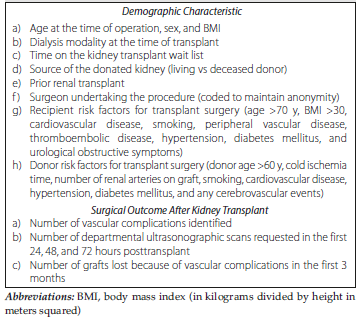 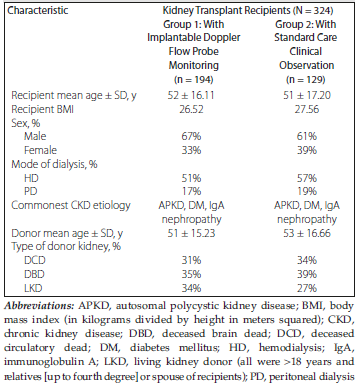 Table 3. Summary of the Results