We report a case of cataract-combined penetrating keratoplasty that required rekeratoplasty for refractive status because of the inadvertent use of a cornea from a donor who had undergone LASIK surgery. The case presents the use of perioperative visualization, anterior segment optic coherence tomography, and histopathologic confirmation. A 63-year-old female patient with leukoma and cataract in the left eye underwent combined cataract surgery and penetrating keratoplasty. During surgery, a jelly-like layer extending a few millimeters in diameter was observed around the lenticule. In addition, the graft was noticed to separate into 2 distinct layers, which were attributed to previous LASIK surgery. Optic coherence tomography of the postoperative anterior segment of the donor cornea also revealed a LASIK flap layer. Postoperative corneal topography displayed a power distribution of 46.8, 36.9, and 22.1 D at the 1.0-, 3.0-, and 7.0-mm corneal zones, respectively, and the best visual acuity did not improve. For this reason, rekeratoplasty was performed. Histopathologic evaluation of the excised button confirmed the presence of a LASIK flap. To the best of our knowledge, this case is the first report of penetrating keratoplasty that required rekeratoplasty due to refractive status. Perioperative discovery of a jelly-like layer due to a LASIK flap has also not been previously described. As the number of refractive surgeries increases, reliable, low-cost, and simple screening methods must be developed to more successfully detect postrefractive surgery tissue in the donor cornea supply.

Here, we report a case of a patient who required rekeratoplasty after undergoing cataract-combined penetrating keratoplasty (PK); the patient had received a cornea from a donor who was discovered to have undergone LASIK surgery.

A 63-year-old female patient presented with a complaint of visual loss of the left eye. Best corrected visual acuities were counting fingers from a maximum of 2 meters in the left eye and 10/10 in the right eye. Both eyes were normal, with the exceptions of leukoma and cataract present in the left eye.

Under general anesthesia, trephination was performed using a 7.5-mm-diameter donor punch and a 7.75-mm-diameter vacuum trephine (Jedmed Instrument Co., St. Louis, MO, USA). All PK steps were straightforward until the placement of the donor button on the host bed. At this point, extraordinarily, a jelly-like layer splayed around the lenticule. After the first 4 sutures, the graft was noticed to separate into 2 distinct layers, which were attributed to previous LASIK surgery. The jelly-like layer was identified as the LASIK flap ( Figure 1A). During surgery, there were no additional corneas available other than the original donor’s and thus there was no possibility for exchanging the graft. Therefore, the surgery was continued with extra care to ensure a deep bite taken through the 2 graft layers using 10-0 nylon sutures. The patient was informed about the situation postoperatively. Anterior segment optic coherence tomography (Topcon, 3D-OCT-2000, Tokyo, Japan) also revealed the LASIK flap layer ( Figure 1B).

Pentacam (Oculus Optikgeräte GmbH, Wetzlar, Germany) keratometry indicated a power distri-bution of 46.8, 36.9, and 22.1 D at the 1.0-, 3.0-, and 7.0-mm corneal zones, respectively (Figure 1C). Central corneal thickness was 452 μm (Figure 1D). Due to the refractive status of the graft, rekeratoplasty was performed 2 months later. Histopathologic examination of the removed corneal button indicated a clearly visible flap-bed interface (Figure 2A and 2B). The folds caused by the uneven positioning of the post-LASIK graft resolved after rekeratoplasty (Figure 2C). The new graft was clear, and best corrected visual acuity was 8/10 with +0.75(-3.0α75) at the last follow-up (8 months postoperatively) (Figure 2D).

The Eye Bank Association of America does not permit in PK the use of donor corneas that had undergone refractive surgery and/or anterior lamellar keratoplasty surgery.1 However, accurately identifying donor corneas that have undergone these surgeries remains a significant problem. Medical histories of donors could be helpful, but these might not be available or could be misleading in some circumstances. Additionally, lack of scarring after LASIK decreases the likelihood of detecting such surgeries with a slit lamp.2 Kang and colleagues3 reported that histopathologically eligible tissues in eye banks were misidentified as status-postrefractive surgery when using solely medical history (13.5%) or slit-lamp examination (18.2%). However, eyes with both medical history and slit-lamp examination resulted in a misidentification rate of only 3.4%.3

In the literature, there are several case reports that emphasize the difficulty in using postrefractive surgery corneas in PK.4 The corneal button excised from a post-LASIK donor poses problems both preoperatively and postoperatively. Intraoperatively, mistrephination, a split of donor cornea lamellae, and suturing difficulties have been reported.4 Poor visual postoperative outcomes result mainly from a wide variation in refraction and keratometric values and induced hyperopia. These patients also have high risk of poor wound healing and flap dehiscence.5

Relevant methods should be developed to screen out postrefractive surgery corneas from eye banks. Several practices are currently proposed such as topographic analysis and anterior segment optic coherence tomography. However, the application of these techniques increases the cost of tissue preparation, and each method has its own sensitivity and specificity.1,5-7 Additionally, the reliability of the proposed methods could be reduced by postmortem tissue changes.8

To the best of our knowledge, this is the first case of PK that necessitated rekeratoplasty due to poor postoperative refractive status of the eye. Moreover, the finding of a jelly-like layer due to a former LASIK flap, which has not been described in previous cases, complicated suturation due to problematic tissue apposition. The success and increasing popularity of refractive surgeries will likely increase encounters with post-LASIK donor corneas. Therefore, reliable, low-cost, and simple screening methods for such corneas should be developed to mitigate the potential for increased cases requiring rekeratoplasties.

From the 1Department of Ophthalmology and the 2Department of Pathology, Ege University School of Medicine, Izmir, Turkey
Acknowledgements: The authors declare that there are no conflicts of interest, grants, or other financial support regarding the publication of this article.
Corresponding author: Melis Palamar, Ege University Faculty of Medicine, Department of Ophthalmology, 35040 Bornova, Izmir, Turkey
Phone: +90 232 390 44 20
E-mail: melispalamar@hotmail.com 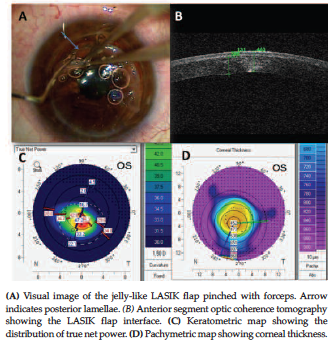 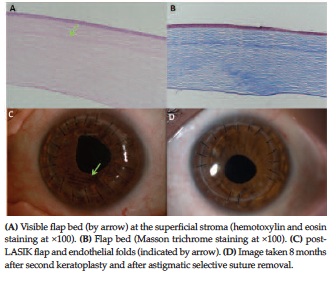 Figure 2. Histopathologic Examination of the Removed Corneal Button and Visual Evaluation of the Patient’s Eye After Rekeratoplasty