Rabbit antithymocyte globulin is a lymphocyte-depleting agent commonly used as induction therapy in kidney transplants. Although its use is generally safe and well tolerated, serious side effects can occur. Here, we describe a case of a severe immune complex hypersensitivity reaction with disseminated intravas­cular coagulation in response to rabbit antithymocyte globulin infusion. Immediate treatment required return to the operating room, massive transfusion of blood products, and plasmapheresis. The patient’s post­transplant course was significant for volume overload, prolonged respiratory failure, and delayed graft function that required hemodialysis, but within 10 weeks the patient had made a full recovery and kidney allograft function had returned to normal.

Prevention and treatment of rejection after organ transplant are managed by immunosuppressive regimens that are generally classified as induction, maintenance, and rescue therapies. Induction immunosuppression is a prophylactic course of intensive immunosuppression given at the time of transplant to prevent acute rejection and to optimize patient and graft outcomes; as such, induction immunosuppression is known to predict graft loss.1 The choice of induction agent may vary, with consideration of the recipient’s immunologic risk and the transplant center’s preference. Based on United States data from 2018, 74% of adult kidney transplant recipients received a T-cell-depleting agent, 21% an interleukin 2 receptor blocker, and only 9% received no induction agent.2 A common T-cell-depleting induction agent in the United States is rabbit antithymocyte globulin (rATG, which is a formulation of rabbit-derived polyclonal antibodies against human lymphocytes).

Although generally safe, there are well-known side effects of rATG, such as fever, chills, and dose-dependent leukopenia. However, the effects on the coagulation cascade have not been fully elucidated and only limited cases have been documented. Some studies have reported that rATG administration may be associated with platelet aggregation and thrombocytopenia,3 deficiency of fibrinogen,4 prolonged coagulation tests,5,6 and disseminated intravascular coagulation (DIC).6-8 The development of DIC is characterized by thrombotic occlusions of blood vessels that lead to depletion of platelets and clotting factors, which inherently could lead to multiorgan failure and an unsuccessful transplant.

History
A 57-year-old White female patient was scheduled for a second renal transplant. She had initially presented with end-stage renal disease and proteinuria 15 years prior, and kidney biopsy at that time revealed a focal glomerulonephritis with mar­ked global sclerosis of some glomeruli and segmental sclerosis of other glomeruli. Differential diagnoses of her underlying kidney disease included focal seg­mental glomerulosclerosis, membranoproliferative glomerulonephritis, and membranous nephropathy. She had previously received the first renal transplant from a living related donor (the donor was a second-degree family member). Over time the patient developed chronic allograft dysfunction, and she was listed for retransplant when her estimated glomerular filtration rate fell below 20 mL/min/1.73 m2.

Operating room summary
After 5 years on the wait list, a renal allograft donated after circulatory death became available, and the patient underwent renal transplant to the left iliac fossa. She received perioperative induction therapy with 75 mg of intravenous rATG. The operation was performed without technical difficulty, and an allograft biopsy was performed 20 minutes after reperfusion. The patient awoke from anesthesia, and extubation was performed. In the recovery room, she became hypotensive and unresponsive, although her pulse remained palpable. Hemorrhagic shock was suspected, and blood product resuscitation was initiated. Her arterial blood gas was remarkable for pH 7.14, 4.7 g/dL hemoglobin, and 8 mmol/L lactate. The patient was immediately returned to the operating room where 1 L of fresh hematoma fluid was evacuated from the iliac fossa. The vascular anastomoses were intact, but profound diffuse surface bleeding from multiple areas on the kidney allograft and the retroperitoneum was encountered. The operative field was packed, and her coagulopathy, which was evident clinically and confirmed by laboratory analysis with rotational thromboelas­tometry (ROTEM) (Figure 1), was corrected with a total of 10 U packed red blood cells, 7 U of fresh frozen plasma, 2 U of pooled platelets, 2 U of cryoprecipitate, and a dose of desmopressin (DDAVP) until the operative field was hemostatic. The patient was noted to have a facial petechial rash and significant edema. A kidney biopsy was not performed in this acutely coagulopathic setting. Postoperatively, blood product resuscitation and hemodynamic support were gradually tapered and removed over the subsequent 48 hours in the intensive care unit. However, the large-volume blood product resuscitation had caused significant volume overload and persistent acute respiratory failure.

Laboratory and pathology findings
The patient’s laboratory analyses, including throm­bocytopenia (platelets 37 × 103/μL), elevated inter­national normalized ratio of 1.5, elevated partial thromboplastin time of 38 seconds, and a highly elevated D-dimer (over 35 mg/L), confirmed the diagnosis of DIC. Her decreased complement levels (C4, 12 mg/dL; C3, 57 mg/dL) were consistent with a serum sickness/immune complex reaction, and it was suspected that the patient had a rare immune complex hypersensitivity reaction with DIC secondary to rATG. Ultrasonography of the kidney allograft showed patent vascular anastomoses. A previous biopsy of the kidney allograft performed at the time of organ procurement did not show any significant abnormality (Figure 2A); however, a biopsy obtained 20 minutes after transplant reperfusion, which was 3 hours after the start of ATG infusion, revealed thrombotic microangiopathy (Figure 2, B to E). On postoperative day 1, she underwent therapeutic plasmapheresis to eliminate residual circulating rATG.

Three weeks after transplant, repeat kidney allograft biopsy was performed, since the patient had made a clinical recovery to the point that she should be tolerant of any therapeutic consequences of an anticipated biopsy result. Pathology analysis revealed persistent thrombotic microangiopathy. There was no evidence of cellular rejection, and staining for C4d was negative. Serum complement C3 and C4 had recovered to levels within normal range. The most likely diagnosis at that time was rATG-associated serum sickness with persistent endothelial injury
that was the cause of the prolonged thrombotic microangiopathy. Alternatively, recurrence of her primary disease could have played a role. The patient underwent 3 treatments of plasmapheresis followed by repeat allograft biopsy that reconfirmed throm­botic microangiopathy and significant ischemic injury (Figure 2F).

Hospital course after transplant
Her clinical course was significant for delayed graft function that required hemodialysis, extensive volume overload with prolonged respiratory failure, and ventilator-associated pneumonia. Six weeks after transplant, the patient had recovered from respiratory failure and urine output gradually improved. Ten weeks after transplant, hemodialysis was discontinued and the patient had stable allograft function with urine output greater than 1.5 L/day, creatinine of 1.85 mg/dL, and an estimated glo­merular filtration rate of 30 mL/min/1.73 m2.

Although induction therapy with a lymphodepletion agent is commonly administered at the time of kidney transplant and is generally safe, the above-described case illustrates the severe adverse events that may occur. To mitigate these possible risks (however unlikely these risks may be), patients in our program receive rATG when high immunologic risk is assigned with regard to any of the following criteria: panel reactive antibodies over 20% (past or present), Black race/ethnicity, over 65 years old and recipient of a kidney with kidney donor profile index above 85%, treatment with desensitization, ABO-incompatible transplant, positive crossmatch, and/or donor-specific antibody with mean fluorescence intensity over 1000 (past or present). In addition, we initiate rATG on postoperative day 1 in the case of delayed or slow graft function. For the patient described in this report, there was joint agreement between the transplant nephrology and transplant surgery teams, who assigned higher immunologic risk to this case on the basis of a second kidney transplant, possible history of focal segmental glomerulosclerosis, and a panel reactive antibodies of 17%. In addition, she was to receive a kidney donated after circulatory death with a kidney donor profile index of 62% and more than 20 hours of cold ischemia time; thus there was a higher likelihood of delayed graft function. She had not been in close contact with rabbits.

The most common side effects of rATG include fever and chills, myalgia, nausea, diarrhea, and mild hemodynamic instability with either hypotension or hypertension, which are thought to be the result of cytokine release from lysis of recipient lymphocytes. If severe, this may lead to a cytokine release syndrome.9 To mitigate the effects of cytokine release, the infusion of rATG should be slow and delivered over a period of 6 hours, and pretreatment medications should be administered, including intravenous methylprednisolone (500 mg), intravenous diphen­hydramine (50 mg), and acetaminophen (650 mg). Serious side effects, such as serum sickness and hypercoagulability, have been reported after exposure to rATG. Serum sickness is a type III hypersensitivity reaction, which is defined by presence of antigen-antibody immune complexes that have been generated secondary to antibody binding to the foreign animal epitopes of the polyclonal immunoglobulin.10 If insufficiently cleared by macrophages, the antigen-antibody complexes may be deposited along the basement membranes of small vessels where these may activate the complement system (which may result in reduced circulation levels of C3 and C4) and coagulation cascades. The resultant inflammatory response may lead to clinical symptoms that include fever, arthralgia, pruritus, or rash.11 A 7.5% incidence of serum sickness in renal transplant patients treated with polyclonal antibody therapy has been reported.11 The clinical presentation is often delayed 7 to 14 days after exposure to the offending agent.

However, in extreme cases, uncontrolled acute activation of inflammation and coagulation may result in acute DIC, of which several cases have been reported.6,7,12,13 In a prospective randomized controlled study that compared the safety profiles of 2 commonly used ATGs, there was a single serious event in which the patient developed DIC with severe bleeding 2 hours postoperatively and 3 hours after exposure to ATG, which led to subsequent allograft failure and removal of the kidney.13 Interestingly, the histology exam of the removed kidney did not show hyperacute rejection, so rATG was proposed to be the cause of DIC. Similarly, in our case, the patient became hypotensive and unresponsive approximately 2 hours after kidney reperfusion and 3 hours after first exposure to ATG.

In conclusion, rATG is a safe agent for induction immunosuppression in organ transplant, but awareness of the risks of severe adverse events is warranted. 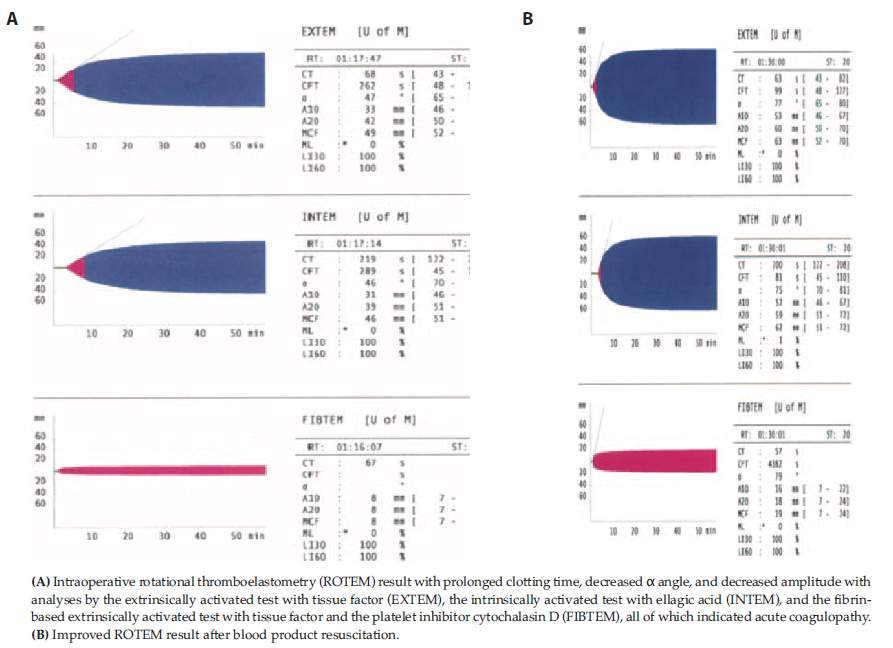 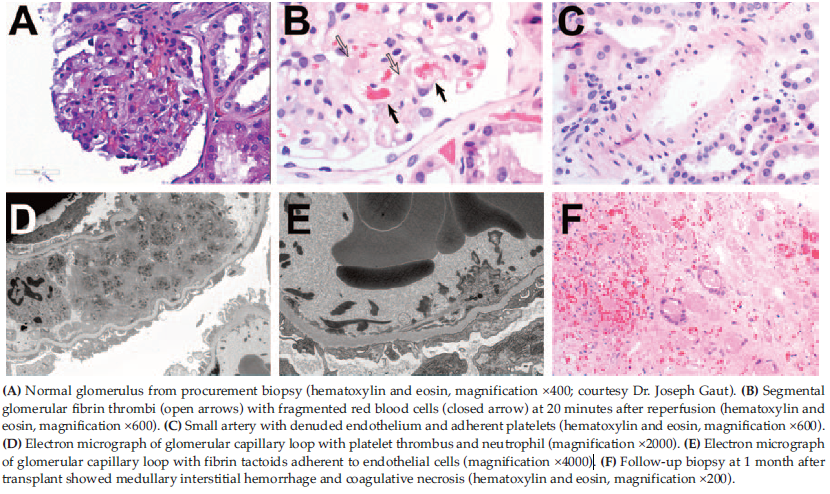