Objectives: The most important complication in kidney transplant is acute/chronic rejection. In this study, we investigated the factors affecting kidney rejection and transplant survival.
Materials and Methods: In this survival analysis study, 352 patients (mean follow-up of 12.9 ± 4.4 years) who underwent renal biopsy due to increased creatinine level from 2012 to 2016 were identified by glomerular filtration rate level and rejection. Probable factors affecting renal function and survival rate after transplant rejection were assessed. P < .05 was considered as significant.
Results: Among our study patients, 40.9% developed early and 59.1% developed late acute kidney injury. Graft survival rates at 1 and 5 years were 98.9% and 68.5%, respectively, which was significant when rejection type was considered (P = .002). In addition, patient survival rates at 1 and 5 years were 99.7% and 98.6%, respectively. Graft survival at 5 years was significantly lower among older subjects, those with diabetes, those who received deceased donor organs, and those with late acute kidney injury (P < .002). Patient survival was significantly higher among young patients, those with systemic lupus erythematosus, those who received living donor organs, and those without cytomegalovirus infection (P < .003).
Conclusions: We observed that recipient age, type of donor, underlying disease, infection, and late acute kidney injury had great negative impacts on renal dysfunction and survival. In our center, because of the large number of kidney transplants from deceased donors, the necessity of antithymocyte globulin induction therapy was considered, since this study showed that patients who received rabbit anti-thymocyte globulin induction had better outcomes.

Renal transplant is the preferred treatment choice for most patients with advanced renal failure.1 An average of 75 to 80 kidney transplants per million population are needed annually. At present in our country, those with transplanted kidneys live an average of 12 to 15 years, with 1-year and 3-year survival rates of 92.0% and 85.0%, respectively.2

Graft rejection is an unintended event that occurs due to immune system reactions; if the immune system is not suppressed, the donation will certainly be lost.2 Kidney transplant rejection includes various types and may be early acute, acute, or chronic. The most important characteristic of rejection is the rapid or gradual increase in creatinine of ≥1.5 mg/dL.5 Hyperacute rejection usually occurs promptly or within minutes after transplant, and treatment involves removing the transplanted organ. Today, this event is very rare due to HLA matching tests.6

Study population
We retrospectively evaluated the outcomes of 352 renal transplant recipients who had undergone kidney biopsies from 2012 to 2016 at the Shiraz Nemazee Hospital due to increased serum creatinine levels of >1.5 mg/dL after renal transplant.

Study protocol
Inclusion criteria were kidney transplant recipients with an increase in serum creatinine >1.5 mg/dL who underwent kidney biopsy. Patients were excluded if there were insufficient medical records and lack of access to patients to complete missing data.

Immunosuppressive therapy
All patients were treated with CNIs (cyclosporine 6 mg/kg/d or tacrolimus 0.05-0.1 mg/kg/d) or mechanistic target of rapamycin inhibitors (everolimus or sirolimus) combined with mycophenolic acid (1440 mg/d) or mycophenolate mofetil (2 g/d) along with corticosteroids (intravenous methylprednisolone of 500 mg and then prednisolone orally at 1 mg/kg/d). Some patients received 2 mg/kg rabbit antithymocyte globulin (rATG) before and 3 days after transplant. In our center, CNI doses were adjusted to achieve target trough levels (for cyclosporine, 200-300 ng/mL for the first 3 months and then 100-200 ng/mL; for tacrolimus, 8-12 ng/mL for the first 3 months and then 5-8 ng/mL). Oral prednisolone dose was tapered to 20 mg/day after 1 month, 10 mg/day after 2 months, and 5 mg/day after 6 months.

Rejection type
Depending on the histopathology and immunological characteristics, renal transplant rejection can be classified as hyperacute rejection, acute rejection, which is classified into antibody-mediated rejection (AMR) and acute cellular rejection (ACR), chronic allograft nephropathy (CAN), and a mix of acute rejection superimposed on chronic rejection. Because not all patients with renal dysfunction show pathology of rejection in their renal biopsy, we defined early versus late AKI in our study. In addition, 55 patients had simultaneous kidney and pancreas transplant because of underlying disease of diabetes.

Ethical considerations
Our study protocol was in accordance with the Declaration of Helsinki and the local ethics committee. All patients provided written informed consent before inclusion.

Our study included 352 renal transplant recipients who developed AKI posttransplant and underwent renal biopsies, which were performed at a range of 6 days to 18 years after transplant. Patient characteristics are shown in Table 1. Mean follow-up of patients was 12.9 ± 4.4 years (minimum to maximum of 5 to 27.0 years). Mean age of patients was 36.3 ± 14.8 years at the time of renal transplant; 61.6% of patients were men. Diabetes mellitus (35.2%) and systemic lupus erythematous were the main causes of renal failure. There were 57 living donors (16.7%), which included 43.9% parent donors and 56.1% sibling donors.

In 74.6% of recipients, tacrolimus plus myco-phenolate mofetil was the immunosuppressive regimen. Type of dialysis before transplant was hemodialysis in 88.6% of patients. Among the 352 recipients, 144 (40.9%) developed early AKI and 208 (59.1%) developed late AKI. There was no significant difference between early and late AKI with regard to age, sex, underlying disease, type of dialysis, and immunosuppressive drug (P > .05). Most recipients who received organs from living donors developed late AKI (77.2%) versus 55.6% of recipients who received organs from deceased donors.

In this study, 45.5% of patients received rATG as induction; these patients showed less probability of developing early AKI versus late AKI (4.5% vs 52.5%; P = .023). Infections with BK virus and CMV were reported in 16.5% and 5.9% of patients, respectively, which mostly occurred during the first month posttransplant. The mean last eGFR result was significantly higher in younger patients, men, those with early AKI, and those who received rATG induction (Table 2; P < .001).

Patient survival was significantly lower among older patients, those with diabetes, those who received deceased donor organs (both 1-year and 5-year survival) and those with CMV infection (5-year survival) (P < .003; Table 4). In multivariate analysis, only CMV infection was a significant risk factor for patient survival (hazard ratio of 3.1; 95.0% CI, 1.1-9.1; P = .043).

This retrospective study analyzed the effects of recipient characteristics, immunosuppressive drugs, type of rejection, and specifically time of renal dysfunction after renal transplant on kidney and patient survival outcomes in renal transplant recipients. We found that late AKI was a determinant of long-term graft survival, as previously reported.8,9 In our study, the late AKI group had significant lower eGFR at last follow-up than the early AKI group. Although different studies had various definitions of early and late rejection (from 2-12 months), it seems that the most probable causes are related to CNI toxicity, persistent interstitial inflammation and tubulitis, and nonadherence with immunosup-pressive medications for late rejection episodes,10 leading to CAN and decreased survival of grafts in the long term.

In a multivariant analysis, Koo and colleagues reported no statistical difference between early and late rejection with regard to graft survival. They defined late rejection as that occurring 1 year posttransplant.11 Variable results may be because studies use different definitions for time of renal dysfunction and rejection. Some studies did not report biopsy-proven acute rejection.8,12 In addition, study populations with regard to deceased or living donors may be different.

With a reported incidence of 30% to 40% in HLA-sensitized patients, AMR is a major risk factor for premature graft loss.13,14 The presence of donor-specific antibodies, preformed or de novo, is a major contributing factor for development of AMR.15 There is also strong evidence that antibody-mediated graft injury is a major cause of late graft loss.16,17 In our study, the prevalence of AMR was lower than shown in other studies, perhaps because most of our pathologies were evaluated before the introduction and use of C4d staining in biopsies as a marker of AMR. We found that late rejection, regardless of type of rejection and renal dysfunction, leads to inferior graft survival, which is consistent with findings in a larger registry study.18

Our study indicated that rATG induction not only had a positive impact on long-term eGFR but also did not increase the risk of posttransplant viral infections, including BK virus and CMV infections. Patients who received rATG had significantly better last eGFR (65.5 ± 34.3 mL/min/m2) than those without rATG therapy (55.2 ± 32.9 mL/min/m2). Ahn and colleagues showed that rATG is an effective way to prevent rejection in both older and younger recipients.19 The use of rATG induction to prevent acute rejection episodes among deceased transplant recipients with high immunologic risk factors is highly effective.20 Previous randomized controlled trials have indicated the efficacy of ATG compared with basiliximab in adult kidney transplant recipients.21-23 Because, in our center at the time of this study, we did not evaluate HLA typing and donor-specific antibodies in all candidates, our recipients were placed in the high-risk immunologic category, with rATG induction seeming to have a promising effect on long-term graft survival.

Our patient survival rates at 1 and 5 years were 99.7% and 98.6%, whereas graft survival rates at 1 and 5 years were 98.9% and 68.5%, respectively. Previous studies have reported their 1-year kidney transplant recipient survival rates as between 90% and 94% and 5-year survival rates that ranged from 68.0% (Doyle and colleagues) to 96% (Rocha and colleagues) among patients without diabetes.24-29 Long-term outcomes have since increased with better expertise and developments in immunosuppression treatment.30 It is well recognized that survival is influenced by several factors. Higher recipient age, diabetes, deceased donor transplants, and late AKI have been associated with lower graft and patient survival at 1 year and 5 years posttransplant. In our study, Cox regression analysis showed that only late AKI was a significant risk factor for graft loss.

In general, living donor transplant procedures have better outcomes than deceased donor transplant procedures, due to better organ quality and less ischemic time.24,31 Recipient age may also have a significant correlation with renal transplant outcomes,32,33 although some studies have found no correlation.11,26 In the study from Ahn and colleagues, which reported on older renal transplant recipients, the incidence of acute rejection was lower, but these rejections may lead to graft loss more frequently.34 Because systemic lupus erythematosus is more common in younger patients and has a low rate of vasculopathy compared with that shown in patients with diabetes, patients with systemic lupus erythematosus may have better survival. Some studies mentioned that patients with diabetes have poorer graft survival.29,31

We found that recipient age more than 30 years, deceased donor status, presence of diabetes mellitus as an underlying disease, CMV infection, and late AKI of the transplanted kidney had strong negative effects on renal function and graft/patient survival after renal transplant. Patients who received rATG induction had better outcomes.

Table 1. Characteristics of Study Patients Based on Rejection Type 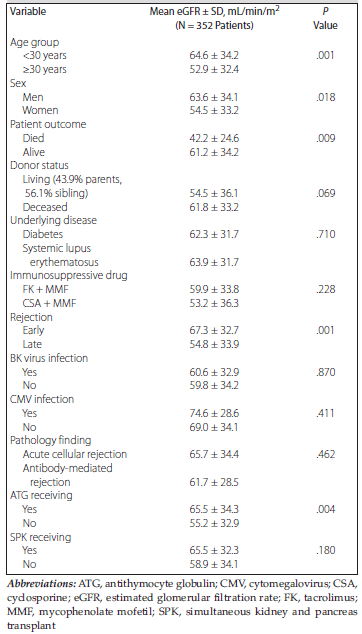 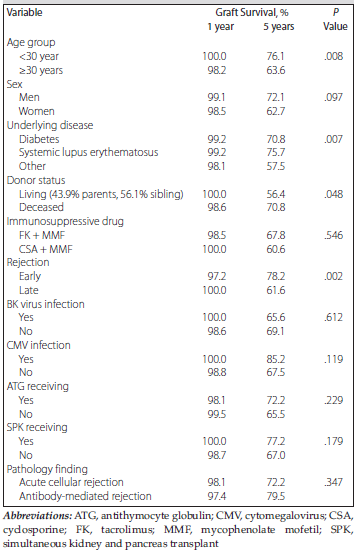 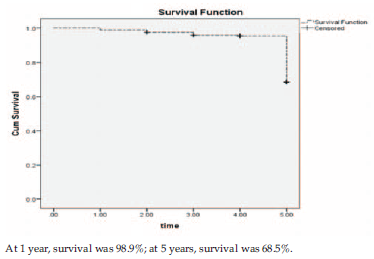 Table 3. Graft Survival After Transplant According to Patient Characteristics (N = 352) 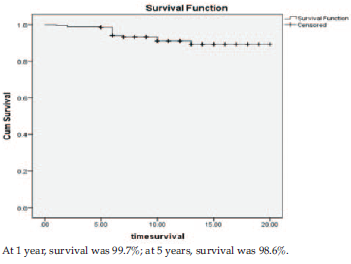 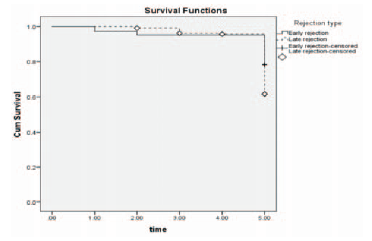 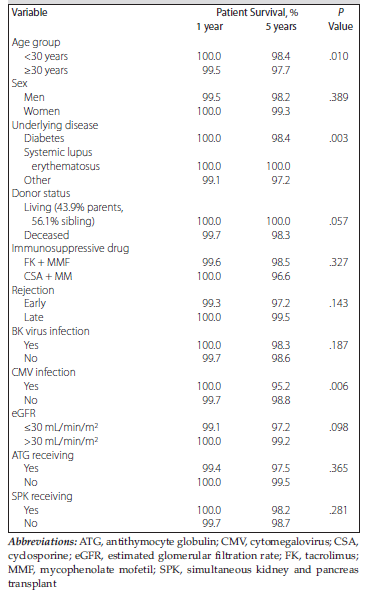 Table 4. Patient Survival After Transplant According to Patient Characteristics (N = 352) 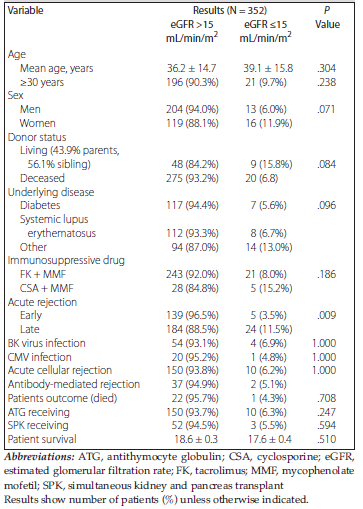