Current therapeutic options with prokinetic agents for posttransplant gastroparesis are limited. Erythromycin is associated with adverse reactions, including corrected QT interval prolongation and cytochrome P450 3A4 isoenzyme inhibition. The use of erythromycin has been avoided in patients undergoing treatment with cyclosporine or tacrolimus because of significant fluctuations in therapeutic immunosuppression levels. We report herein the successful use of erythromycin after visceral transplant to treat delayed gastric emptying. Two patients were managed with oral erythromycin (initial dose of 750 mg/d divided into 3 doses) for gastroparesis after visceral transplant. Patient 1 was a woman aged 42 years with a history of chronic intestinal pseudo-obstruction syndrome who underwent isolated small bowel transplant with dual (gastric and duodenal) proximal allograft anastomosis. Posttransplant gastroparesis was initially managed with oral metoclopramide. The patient also required high doses of tacrolimus (36 mg/d) to maintain adequate immunosuppression levels. The decision was made to change metoclopramide to erythromycin, which significantly decreased the daily tacrolimus dose requirement (from 36 to 9 mg/d), with resolution of nausea and intermittent bloating symptoms. Patient 2 was a woman aged 35 years with ultra-short gut syndrome after extensive enterectomy due to intestinal volvulus who underwent uneventful combined intestinal and colon transplant. Conventional pharmacologic therapy for gastroparesis was initiated after surgery without success. Erythromycin was started 15 days posttransplant, with significant improvement in her symptoms, and discontinued 47 days post­transplant. To maintain therapeutic levels (8-10 mg/dL), daily tacrolimus dose was decreased 75.8% and 36.5% for patients 1 and 2, respectively. No significant side effects associated with erythromycin use were observed in either patient. Our findings here suggest that erythromycin may be safely used for gastroparesis after small bowel transplant. Close monitoring of immunosuppressive drug levels and dose adjustments of other medications affected by inhibition of cytochrome P450 3A4 are advised.

Motility disorders, including graft hypermobility or hypomotility and gastroparesis, are common findings after visceral transplant surgery.1 Pharmacologic interventions have been widely used in the manage­ment of gastroparesis from different etiologies.2 However, their effectiveness has not been clearly established. Current therapeutic options for post­transplant gastroparesis with prokinetic agents are limited.2 Erythromycin is a potent stimulator of gastrointestinal motor activity but is associated with adverse reactions, including corrected QT (QTc) interval prolongation (torsades de pointes) and cytochrome P450 3A4 isoenzyme inhibition.3-5 Due to the latter effect, the use of erythromycin has been avoided in patients undergoing organ transplant who are also taking calcineurin inhibitors (ie, cyclosporine or tacrolimus) and mammalian target of rapamycin inhibitors (ie, sirolimus and everolimus).4 The decrease in the metabolism of these drugs could lead to significant fluctuations in therapeutic immunosup­pression levels, thereby affecting graft viability or renal function. We report herein the successful use of erythromycin for the treatment of gastroparesis in 2 patients who underwent small bowel transplant surgery and were receiving tacrolimus therapy.

Patient 1
A woman aged 42 years with a history of chronic intestinal pseudo-obstruction syndrome underwent a total enterectomy and near-total colectomy followed by an isolated small bowel transplant. The patient received thymoglobulin preconditioning (7.5 mg/kg), and her postoperative immunosup­pression regimen consisted of tacrolimus and low-dose steroids. Proximal gastrointestinal reconstruction was achieved with dual (gastric and duodenal) allograft anastomosis (Figure 1A). Posttransplant gastroparesis was managed with oral and intravenous metoclopramide without significant improvement in her symptoms. The patient also required high doses of tacrolimus (36 mg/d divided into 2 doses) to maintain adequate immunosuppression levels (goal, 8-10 mg/dL). The decision was made to change metoclopramide to erythromycin (750 mg/d in 3 divided doses) 2 months after transplant. The daily dose of tacrolimus was decreased significantly (from 36 to 9 mg/d) after erythromycin was started, with complete resolution of her nausea and intermittent bloating symptoms (Figure 2A). No significant side effects associated with the use of erythromycin were observed. Six months after transplant, the erythromycin was discontinued.

Patient 2
A woman aged 35 years, with a past surgical history of total colectomy and enterectomy due to intestinal volvulus, underwent a combined intestinal and colon transplant (Figure 1B). The recipient received a single, 10 mg/kg dose of thymoglobulin at induction and was maintained on tacrolimus for immunosup­pression. Her postoperative course was unremarkable. Conven­tional pharmacologic therapy for gastroparesis was initiated after transplant without success. The patient was started on erythromycin 15 days after her transplant surgery, with significant improvement in her symptoms (Figure 2B). Treatment with eryth­romycin was discontinued 47 days after transplant surgery.

Discussion
Gastroparesis is a well-described postoperative complication in recipients of solid-organ transplant and after autologous bone marrow transplant.6-8 Posttransplant delayed gastric emptying has been attributed to various etiologies, including postope­rative stress, viral infections (mainly cytomegalovirus and herpes simplex virus), graft-versus-host disease, and side effects of medications such as opiates. Current approved treatment options for gastroparesis include metoclopramide and gastric electrical stimulation.2 However, these options are not effective for all patients. Other options aimed at symptom relief include unapproved medications or off-label indications for agents such as domperidone, glucagon-like peptide 1 analogs, and erythromycin.

Erythromycin is a motilin receptor agonist.9 The activation of motilin receptors is, at least in part, responsible for the salutary effects of erythromycin on gastrointestinal dysmotility. Administration of intravenous erythromycin has been recommended as a prokinetic therapy in hospitalized patients.2,4 A similar response in gastric-emptying studies can be obtained with the use of oral erythromycin. However, the long-term effectiveness of oral therapy is limited by tachyphylaxis.10 Current studies show that clinical responsiveness drops significantly after 4 to 6 weeks of oral erythromycin.

Despite the current recommendation to avoid the coadministration of erythromycin and calcineurin inhibitors, we have used this combination as an alternative to overcome delayed gastric emptying in our patients.4 In this scenario, daily levels of tacrolimus should be obtained with appropriate adjustment of its dose in order to avoid potential renal impairment or neurologic complications associated with high tacrolimus levels, such as tremor, headache, insomnia, paresthesia, and posterior reversible encephalopathy syndrome.11

Our report further documents the interaction between erythromycin and tacrolimus.12-14 To maintain therapeutic levels (8-10 mg/dL), tacrolimus doses were decreased by 75.8% in patient 1 and 36.5% in patient 2 (Figure 1). Previous studies have recommended a 50% early reduction of the calcineurin inhibitor dose when coadministration of erythromycin is needed. However, close monitoring of tacrolimus levels with daily adjustments of its dose is advised because there is a considerable variability in cytochrome P450 3A4 activity in the population. It is also important to highlight that the magnitude of cytochrome P450 3A4 isoenzyme inhibition varies between the macrolides, with erythromycin and clarithromycin having the greatest effect.4 Both patients had significant improvements in their symptoms within 10 days after introduction of erythromycin, reaching full nutritional autonomy at 26 and 56 days, respectively, after transplant. One of the limitations of our study is that no gastric-emptying studies were performed. However, the effectiveness of erythromycin was suggested by the significant improvement in the gastrointestinal symptoms in both patients.

To the best of our knowledge, these are the first case reports documenting erythromycin use after small bowel transplant surgery. The reports suggest that the use of erythromycin to treat delayed gastric emptying in these patients was not associated with adverse outcomes. However, close monitoring of immunosup­pressive drug levels and dose adjustments of other medications affected by the inhibition of cytochrome P450 3A4 are advised for the duration of erythromycin therapy. 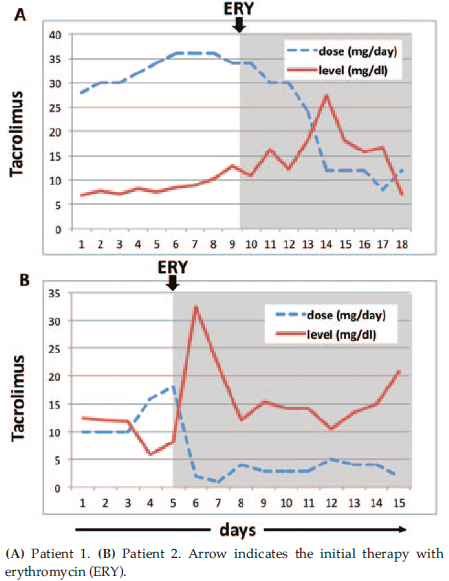 Figure 1. Tacrolimus Levels and Dose Before and After Introduction of Erythromycin in 2 Patients Who Underwent Small Bowel Transplant 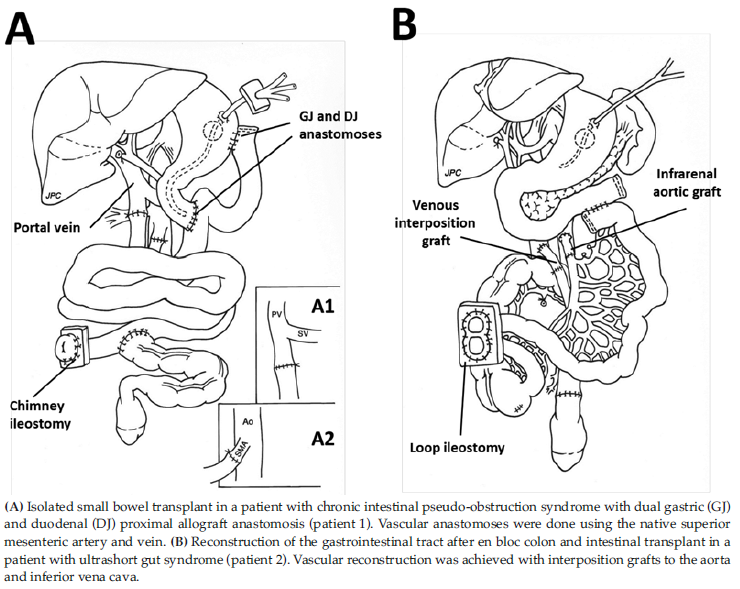