Human herpesvirus 6 (HHV-6) belongs to the Betaherpesvirinae subfamily, in which 2 variants (A and B) have been identified.1,2 The variant HHV-6B is a lymphotropic virus that infects over 90% of humans, typically before the age of 3 years, resulting in a febrile illness associated with rash known as roseola infantum or exanthema subitum (sixth disease).3 The variant HHV-6A has been associated with some chronic neurological disorders, such as multiple sclerosis.4

After primary infection, HHV-6 establishes life-long latency but can become reactivated later in life, especially during immunosuppression. Reactivation after transplant is common, with an estimated incidence after kidney transplant of 23% to 55%.3,4 However, only 1% of transplant recipients will develop clinical illness and most are ascribable to HHV-6B.4,5 Symptoms associated with reactivation are usually nonspecific and can include fever and diarrhea. Rare severe cases of pneumonitis, encephalitis, hepatitis, colitis, and bone marrow suppression have been reported.3,5,6 Early diagnosis and treatment are crucial in life-threatening cases.

Here, we report a case of HHV-6 reactivation after kidney transplant associated with life-threatening pseudo-obstruction and encephalitis, which was successfully treated with antiviral agents. Due to the nature of this report, ethical approval was not required. The patient provided informed consent.

Abdominal computed tomography revealed nonobstructive distension of terminal ileum and colon up to the splenic flexure, with patent mesentery artery and a normal appearance of the pancreas (Figure 1).

The patient continued to deteriorate with worsening abdominal pain and development of gastroparesis/intestinal pseudo-obstruction. The patient then underwent placement of a nasojejunal tube for decompression. Simultaneously, the patient developed generalized myoclonic status, persistent agitation, visual hallucinations, and fever, which were complicated by aspiration pneumonia. Viral enceph-alitis versus tacrolimus toxicity was considered. However, there was no clinical improvement with the conversion from tacrolimus to cyclosporine. A magnetic resonance imaging (MRI) of the brain revealed no abnormalities, and electroencephalogram detected no epileptiform activity.

Repeated lumbar puncture was performed, which showed elevated white blood cell levels, increased protein levels, and no decrease in glucose levels in the cerebrospinal fluid (CSF), suggesting a pattern of viral encephalitis. A PCR assay was performed in CSF samples, which was positive for HHV-6. Quantitative analyses of HHV-6 in CSF and serum samples were further conducted, which demonstrated high viral loads (2346 copies/mL in CSF and 1937 copies/mL in serum). The presence of HHV-6 in colonic biopsy samples was retrospectively confirmed.

The diagnosis of disseminated HHV-6 infection with encephalitis and enterocolitis was then established, and ganciclovir therapy was initiated along with monitoring of HHV-6 viremia.

After completion of 6 weeks of intravenous therapy, the patient was kept on oral valganciclovir for the next 6 months. Treatment resulted in full recovery from gastrointestinal symptoms and gradual improvement of neurological symptoms along with resolution of abnormal liver biochemistry findings.

Herein, we presented a case of an immunocom-promised patient who developed, 1 month after kidney transplant, clinical features of intestinal pseudo-obstruction and atypical neurological manifestations.

The establishment of the final diagnosis of clinically significant HHV-6 infection was complex, as the differential diagnosis included a variety of other viral and bacterial agents in addition to the possibility of tacrolimus toxicity. Moreover, because HHV-6 is a ubiquitous agent and the coinfection with CMV is frequent, certain clinical manifestations, such as colitis, may be easier linked to CMV rather than to HHV-6. In the present case, there was no evidence of coinfection, as repeated tests for CMV were negative. For these cases, pure HHV-6 infection should be considered. However, the formal demonstration of the causative role of HHV-6 is difficult as it is necessary to distinguish between latent and active disease. Qualitative viral DNA PCR, one of the most widely used diagnostic tools, although it has high sensitivity and specificity, is unable to distinguish between them. In addition, detection of HHV-6 antigens by immunohistochemistry in biopsy specimens does not necessarily implicate the virus as the etiology of a specific illness because antigens may be detected in tissue in the absence of symptoms.

In fact, in the present case, the qualitative demonstration of HHV-6 DNA in CSF sample by PCR assay was insufficient to establish the diagnosis of an active systemic HHV-6 infection. In the same way, the demonstration of HHV-6 in colonic biopsies by immunohistochemistry would not have diagnosed active HHV-infection, even if performed earlier. In their study of kidney transplant recipients, Lempinen and colleagues5 investigated the presence of HHV-6 with immunohistochemical methods in gastro-duodenal and colon biopsy samples. The investigators found HHV-6B-positive cells in samples from 36% of kidney transplant recipients, although these findings did not necessarily reflect active viral replication.

To establish a definitive diagnosis of active HHV-6 disease, a highly sensitive, quantitative assay, based on real-time PCR, is necessary for the accurate measurement of HHV-6 DNA in clinical specimens. A quantitative HHV-6 DNA PCR test from plasma has been reported to be approximately 84% specific for actively replicating virus.7 Although no threshold has formally been defined as the frontier between latent and active infections, the threshold of 1000 genome-equivalent copies per milliliter delineates a zone separating the 2 stages of HHV-6 infection.

Although HHV-6 has been recognized as a cause of infection in kidney transplant recipients, most patients are asymptomatic. In fact, there are only few reports on symptomatic or even fatal cases of HHV-6 disease in kidney transplant recipients.1,3,6 The spectrum of clinical manifestations is wide, with most severe cases characterized by hemophagocytic syndrome, pancytopenia, encephalitis, severe hepatitis, or colitis.1,4

Colitis has been previously described as a manifestation of HHV-6 infection; however, in our patient, the intestinal involvement expressed itself in a unique clinical feature, that is, as pseudo-obstruction syndrome, characterized by massive gastric, small bowel, and colonic dilatation.1,3,4

Along with this gastrointestinal picture, our patient also had central nervous system involvement. Only a few cases of HHV-6-associated encephalitis after solid-organ transplant have been reported in literature, whereas it has been frequently reported as a fatal disease after hematopoietic stem cell transplant.6 Clinical symptoms experienced by our patient are similar to those previously described and include confusion, involuntary movements, visual hallucinations, fever, and seizure.6

When HHV-6 encephalitis is suspected, brain MRI imaging is recommended. However, as focal findings may not present in the initial phase of encephalitis, quantitative PCR methods are indicated in order to establish early diagnosis and to initiate antiviral therapy promptly.

One of the suspected risk factors for HHV-6 infection after transplant is the degree of immunosuppression.6 In our present case report, the patient was in a deeply immunocompromised state because she not only received induction therapy (basiliximab) but also maintenance immunosup-pression, with levels of tacrolimus persistently high. These may have contributed to the development of the disseminated HHV-6 infection with life-threatening and severe organ disease.

Once the diagnosis of HHV-6 disease is established, antiviral therapy is recommended. The recent updated guidelines from the American Society of Transplantation Infectious Disease Community of Practice state that antiviral therapy with foscarnet, ganciclovir, or cidofovir should be initiated for HHV-6 encephalitis and should be considered for other manifestations of disease.7 Moreover, in moderate or severe cases, antiviral treatment may be complemented by reduction in pharmacologic immunosuppression.7 During treatment, viral load monitoring should be used to guide the duration of anti-HHV-6 treatment.4

Prognosis of HHV-6B infection depends greatly on the affected organ. Although HHV-6-induced colitis generally demonstrates good clinical improvement with antiviral therapy,3 mortality of HHV-6 encephalitis is high, and survivors are often left with serious sequelae.8,9 Early diagnosis and initiation of effective treatment may be key factors for successful resolution of HHV-6 encephalitis.6

After solid-organ transplant, HHV-6 can be an important pathogen leading to the development of an uncommon but potentially fatal disease. Our reported patient presented with a broad spectrum of disease associated with HHV-6. Clinical awareness and early diagnosis by quantitative HHV-6 PCR of both blood and CSF were key factors for successful resolution. 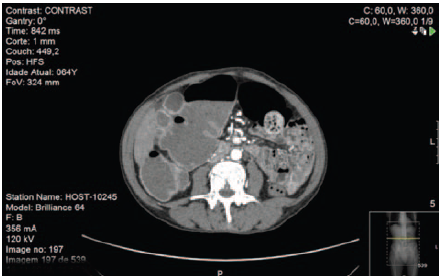