The Global Burden of Disease 2015 Obesity Collaborators have reported that the disease burden caused by high body mass index (BMI, calculated as weight in kilograms divided by height in meters squared) has increased since 1990.1 The overall prevalence of obesity was 5.0% for children and 12.0% for adults (double the prevalence from 1990) in more than 70 countries. For adults, this increase in obesity was most prevalent in women 60 to 64 years old and men 50 to 54 years old. Obesity, type 2 diabetes mellitus, hypertension, and dyslipidemia constitute the metabolic syndrome, which plays a causative role in fat accumulation in the liver that can lead to nonalcoholic fatty liver disease (NAFLD),2 which refers to a spectrum of liver diseases including steatosis, steatohepatitis, fibrosis, and nonalcoholic steatohepatitis (NASH).3 Simple steatosis in NAFLD is characterized by fat accumulation in the liver, whereas NASH is characterized by ballooned hepatocytes, inflammation, and fibrosis and can lead to cirrhosis and hepatocellular carcinoma.2,3 In the Third National Health and Nutrition Examination Survey (known as NHANES III, 1988-1994) database, results for NAFLD and NASH show prevalence of 18.8% and 2.6%, respectively. Patients who were overweight had a rate of NAFLD prevalence up to 28%.3 The NHANES III data reported a concurrent increase in prevalence of obesity and NAFLD in the United States population. The annual all-cause mortality rate associated with NASH is 25.56 per 1000 person-years, and liver-specific mortality rate is 11.77 per 1000 person-years.4 The overall prevalence for NASH is 3% to 6%, and approximately 20% of these patients develop cirrhosis; as such, NASH is rapidly becoming the most common indicator for liver transplant (LT) in the United States.5,6 In female patients who require LT, NASH cirrhosis is now the leading indicator for LT.6

With regard to the prevalence of obesity and metabolic syndrome-associated NAFLD/NASH, along with the subsequently higher rates of LT to treat NASH, we investigated the natural history of post-LT recurrence of NAFLD/NASH and sought to identify any risk factors associated with disease recurrence.

Ethics disclosure
Before data collection, we obtained approval from the Institutional Review Board, and the retrospective nature of this study allowed for a waiver of the typical requirement for written informed consent from each participant. All aspects of this research complied with the ethical criteria set by the 1975 Helsinki Declaration.

Data were collected from medical records of patients who underwent deceased donor LT as treatment for NASH at Vanderbilt University Medical Center from January 1, 1998, to December 31, 2017.

Patients with a diagnosis of cryptogenic cirrhosis were also included in the analysis if they had at least 3 of the following 4 characteristics: diabetes, hypertension, hyperlipidemia/hypercholesterolemia, and BMI greater than 28.8. Patients were also included if their preoperative liver biopsy or explant pathology results were consistent with NASH. We collected recipient data that included details of preoperative hypertension, diabetes, hyperlipidemia, BMI, and cholesterol panel results. The data for aspartate aminotransferase (AST), alanine aminotransferase (ALT), albumin, platelets, and cholesterol panel were collected for all recipients at 3 months after transplant and at 1, 3, and 5 years. Imaging studies and liver biopsy reports were obtained postoperatively at the discretion of the clinician. Posttransplant imaging reports were reviewed for evidence of NAFLD. Posttransplant biopsy reports were reviewed for evidence of recurrent NASH or NAFLD. Data for exposure to medications were collected at the time of transplant and at 3 months, 1 year, 3 years, and 5 years posttransplant. Relevant medication exposures included basal insulin, thiazolidinediones, other antidiabetic medications, cholesterol reduction medications, antipsychotic medications, antidep-ressant medications, and anticonvulsant medications. Data for total posttransplant duration of prednisone regimens were also collected.

Donor data included age, BMI, male/female, and details of hypertension, diabetes, and biopsy results. Most donor liver biopsies were performed before implant, according to our standard institutional protocol. Donor biopsies were routinely evaluated by a pathologist. Macrosteatosis was graded as none, minimal (<5%), mild (5%-33%), and moderate (33%-67%). Any degree of fibrosis was also noted and reported as confirmation of fibrosis.

Statistical analyses
Continuous variables are summarized as median values (with 25th and 75th percentiles), and categorical variables are summarized as percentages. For comparison of a patient’s previous history of recurrence versus baseline laboratory results and demographic variables, we used the Wilcoxon rank sum test (continuous variables) and the Pearson chi-square test (categorical variables). A linear mixed effects model was used to estimate mean changes in BMI, AST, ALT, and platelets over time. We included fixed effects for time, recurrence group, and the time by recurrence interaction. We used a random intercept to account for correlation caused by same-subject repeated measurements over time. Likelihood ratios tests were used to test for differences in trajectories over time by recurrence group. Values for time to graft loss or death were analyzed with separate Cox proportional hazards models, with NASH recurrence or NAFLD recurrence as the time-varying covariate. Subjects were considered at risk for disease recurrence from the time of transplant and were censored on the date of the most recent follow-up or on the date of any event of interest/concern. All analyses were conducted with the R statistical language.

In our large, single-center study of patients who received LT as treatment for NASH cirrhosis, the NAFLD recurrence rate was 22% after LT, and the NASH recurrence rate was 11%. These rates are lower than the rates reported in other studies, and the likely reason may be that an investigation for recurrent NAFLD/NASH was only performed when clinically indicated, rather than according to a protocol-based approach. Studies with protocolized diagnostic modalities (periodic imaging or liver biopsy) have shown incidence rates of allograft steatosis as high as 89% to 100%.7-10 In an early retrospective review of 30 patients with either NASH or cryptogenic cirrhosis, Contos and colleagues showed incidence of allograft steatosis to be nearly 100% at 5 years after LT.9 This cohort had undergone protocol biopsies at 6 months after LT and 12 months after LT and then at intervals of 1 to 2 years thereafter, as well as with elevated liver enzymes and clinical concerns.

Despite a high incidence of recurrent NAFLD in patients who received LT for NASH cirrhosis, graft survival after LT does not seem to be affected by recurrent disease.7,10-12 In a retrospective review of 588 adult LT recipients, incidence of allograft steatosis was 77.6% in recipients of LT for NASH.11 However, similar to the findings in our study, allograft steatosis was not associated with reduction in post-LT survival. The authors also reported a rate of 40% for cardiovascular events at 5 years after LT in the recipients treated for NASH compared with a rate of a 5% to 10% in the patients without a history of NASH. In their retrospective review of 257 patients who underwent LT for NASH or cryptogenic cirrhosis, Yalamanchili and colleagues noted that, although the rates for long-term survival were not different between NASH and non-NASH groups, cardiovascular disease was more likely related to mortality rather than the recurrent liver disease itself.8 Although recurrent NAFLD in recipients of LT for NASH cirrhosis may not affect graft survival, these patients remain at higher risk for cardiovascular events due to underlying metabolic disease.

We examined BMI before LT and at several time points after LT. Although we did not find a statistically significant difference between BMI in patients with NAFLD/NASH recurrence, we did note a steady increase in BMI after LT for all our recipients, and the average BMI value was substantially higher (30 or higher) at 1 year and later after LT. Other studies have similarly reported that BMI was not associated with NAFLD recurrence.7,8 However, some studies have reported an association between BMI and NAFLD/NASH recurrence.10,13 Dureja and colleagues found a statistically significant association between BMI and recurrent NAFLD in patients both before LT (BMI 37 vs 31, for NAFLD recurrence vs nonrecurrence) and >6 months after LT (BMI 36 vs 28, for NAFLD recurrence vs nonrecurrence).12

Richards and colleagues studied patients who were not obese at the time of LT and found an incidence rate for obesity of 15.5% at 1 year after LT and 26.3% at 3 years after LT.14 Similar to the trend seen in our patients, they observed an initial weight loss followed by weight gain in the first 3 years, and the most rapid weight gain occurred in the first year after LT. Anastacio and colleagues reported a 58% incidence of patients who were overweight and a 21% incidence of obesity at the 4-year follow-up after LT (both observations were based on BMI).15 They also found similar results with regard to fat percentage and abdominal obesity and found higher BMI before LT to be a major risk factor for obesity after LT. The post-LT weight gain is likely to be multifactorial, with factors such as existing obesity, dietary/sedentary habits, and medications. Previous studies have established the association between antidiabetic/antidepressant use and weight gain, as well as an indirect association between weight gain and cholesterol reduction agents.16-18 Notably, we did find an uptrend in posttransplant BMI, but we did not find a difference in medication exposure (antidiabetic medications such as insulin, as well as cholesterol reduction agents, antidepressants, anticonvulsants, or antipsychotic medications) and NASH recurrence after transplant.

Our study showed that an increase in BMI did not increase the risk of NAFLD/NASH recurrence and that disease recurrence is not associated with increased mortality after LT; however, the significance of increasing obesity and the corresponding risk of cardiovascular complications cannot be ignored. In our practice, all follow-up visits for LT recipients include counselling sessions for lifestyle modifications and weight loss. For those patients who do not meet weight goals and are receptive to additional help, we provide referrals to a medical weight loss clinic. The BMI results from our study demonstrate a need for additional investigation of the association between obesity and the risk of cardiovascular complications. Future studies of emerging weight-loss medications and weight-loss surgical procedures on select post-LT patients should improve our knowledge of these obesity-related complications.19,20

An important benefit of a single-center study is the ability to collect granular data. Accordingly, in the present study we collected extensive data on patients’ exposure to various classes of medications at multiple time points and observed no association between these medications and the recurrence of NAFLD/NASH.

Limitations to our study include the inherent constraints of retrospective studies. Additionally, there is a potential for information bias due to missing data points. As mentioned previously, the observed incidence of NAFLD/NASH recurrence may be lower than the true incidence, because procedures such as radiologic evaluation and biopsies are often motivated only by clinical suspicion rather than by standard protocols. We found that AST and ALT levels correlated with NAFLD and NASH recurrence, but recognize this correlation is possibly because investigations were often performed in patients because of elevated AST and ALT.

Our study showed that recurrence of NAFLD/NASH after LT for treatment of NASH was not associated with a higher risk for graft loss in the post-LT follow-up period, which is consistent with the literature. Also, BMI was not associated with NAFLD/NASH recurrence, but there were post-LT increases in BMI for all patients. More aggressive future efforts should focus on the treatment of post-LT obesity. 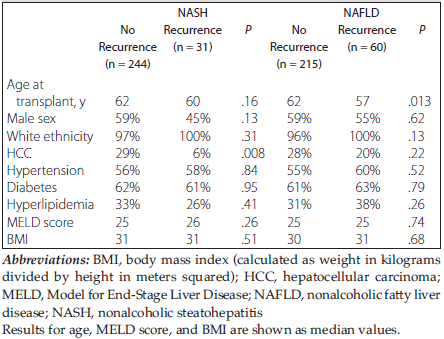 Table 1. Pretransplant Demographic Data for Patients With or Without Recurrence of Nonalcoholic Steatohepatitis or Nonalcoholic Fatty Liver Disease 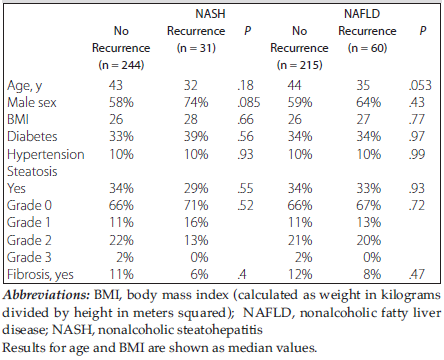 Table 2. Donor Characteristics for Transplant Recipients With or Without Recurrence of Nonalcoholic Steatohepatitis or Nonalcoholic Fatty Liver Disease 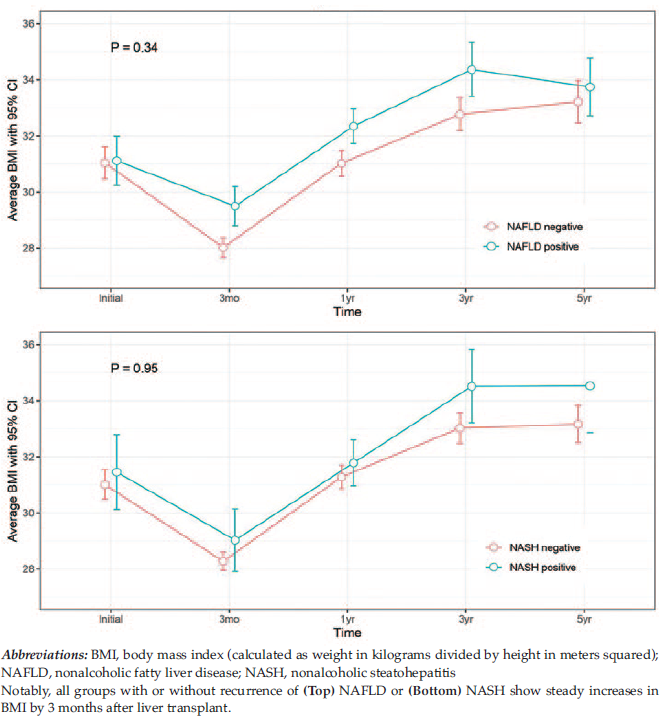 Figure 1. Changes in Body Mass Index Over Time in Liver Transplant Recipients With or Without Recurrence of Nonalcoholic Steatohepatitis or Nonalcoholic Fatty Liver Disease 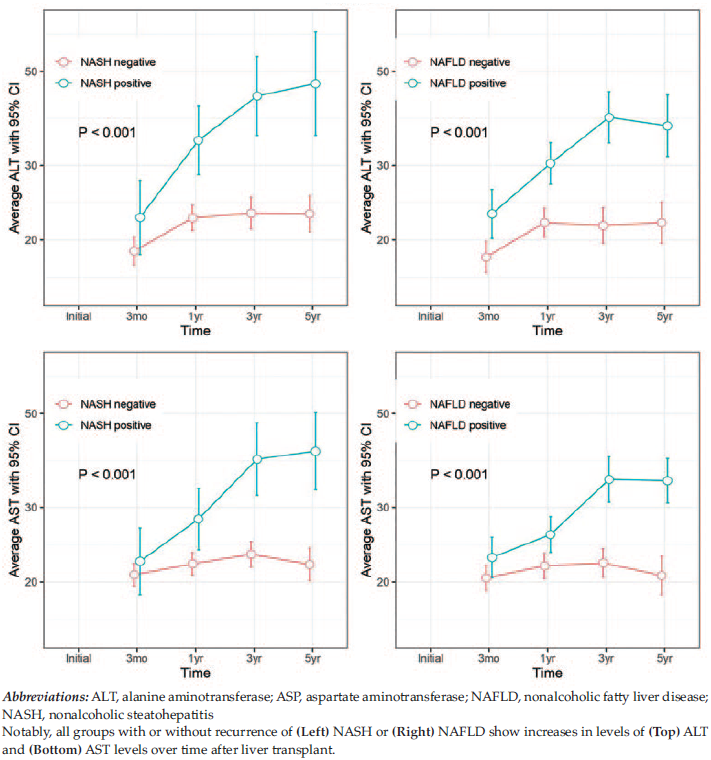