Death with graft function (DWGF) is a major cause of graft and patient loss after kidney transplant. In large cohort studies of kidney transplant recipients, DWGF accounted for 38% and 42.5% of deaths and graft losses, respectively,1 with fatalities in almost one-fourth of patients within the first posttransplant decade.2 Various pretransplant and posttransplant risk factors have been linked to DWGF, but cardiovascular disease (CVD) remains the leading cause of death.3,4

Kidney transplant in developing countries faces many challenges.5 Therefore, every attempt should be made to improve its outcome. Death with graft function, an important yet a potentially modifiable cause of graft loss, has been poorly investigated among Egyptian kidney transplant populations. Two decades after our previous report,6 we here report on DWGF among our living donor kidney transplant patients throughout a period of more than 4 decades.

This retrospective study was carried out in accordance with the code of ethics of the 2013 World Medical Association (Declaration of Helsinki) for studies involving humans. Data on transplant recipients are stored in internal servers and system (patient information system). Data were retrieved from our patient information system at our urology and nephrology center after agreement from the head of the department and director of the center. No patient names, initials, or hospital numbers were used. This study was approved by the ethical and research committee of the Urology and Nephrology Center, Mansoura University (Mansoura, Egypt).

This study included 2953 recipients who had kidney transplant procedures between March 1976 and December 2018 at our Urology and Nephrology Center at Mansoura University. During this period, 3018 kidney transplant procedures were performed. There were 65 recipients who were not followed up at our center (referred to other centers) after transplant and thus were excluded from the study. All patients received their grafts from living blood-related donors.

Patients included in the study were divided into 4 groups according to the condition at last follow-up: DWGF group, alive with graft function (AWGF) group, alive with graft loss (AWGL) group, and death with graft loss (DWGL) group. In our study, DWGF was defined as death of a kidney transplant recipient without the need for dialysis or retransplant. Patient data were retrospectively analyzed. The DWGF group was compared with each of the other 3 groups with regard to pretransplant and posttransplant data. Primary immunosuppression protocols showed successive modifications following global evolutions in the immunosuppression armamentarium.

Our study period was divided into 4 eras: era 1 (era of conventional immunosuppressive regimen: steroid plus azathioprine) was from 1976 to 1985, era 2 (era of cyclosporine) was from 1986 to 1995, and era 3 and era 4 were from 1996 to 2005 and from 2006 to 2018, respectively, when tacrolimus and mycophenolate mofetil were utilized. After 2007, a steroid-free regimen has been utilized for patients with low immunologic risk. Induction therapy with basiliximab has been routinely used for all patients since 2010 with the exception of high immunologic risk candidates for whom antithymocyte globulin induction was implemented. Since 1993, rejection has been defined according to the consecutively published Banff schemas.

Statistical analyses
Qualitative data are displayed in cross tabulation, whereas quantitative data are shown as arithmetic mean and standard deviation. Data of the DWGF group were compared with each of the other 3 groups using chi-square and Fisher exact tests for qualitative variables and unpaired t tests for quantitative variables. P < .05 was considered significant. Multi-variate analysis was performed using hazard Cox regression model. Kaplan-Meier survival curves were used to evaluate patient and graft survival rates. Analysis was carried out using the computer package SPPS for Windows version 10.

Pretransplant and posttransplant features of the death with graft function group
We compared the DWGF group with the AWGF, AWGL, and DWGL groups with regard to different pretransplant (Table 1) and posttransplant (Table 2) characteristics. Among the whole group of patients, 2059 patients (69.7%) had unidentified original kidney disease, 2793 (94.6%) underwent pretransplant dialysis, 1250 (42.3%) received pretransplant blood transfusion, 1600 (54.2%) had pretransplant hypertension, and 170 (5.8%) had pretransplant diabetes mellitus. According to the policy of our transplant program, recipients and donors must share at least 1 DR locus. All primary immunosup-pressive protocols included steroids at variable doses except for the tacrolimus-based regimen, which included both steroid-free and steroid-containing regimens. Posttransplant hypertension and new-onset diabetes mellitus were reported in 1336 patients (45.2%) and 628 patients (21.3%), respectively.

Sites and causes of infections and types of malignancies that led to death (DWGF and DWGL) were further analyzed (Table 4). The respiratory system was the most common site, and bacterial infection was the most common cause of fatal infections in both groups. Despite higher prevalence of genitourinary infections in the DWGF group, this difference did not rank to a statistical significance. The etiology was unknown in 3.1% of all infection-related deaths. Posttransplant lymphopro-liferative disorder, the most common fatal malignancy in the DWGF group, was not among malignancies that led to DWGL.

The prevalence of DWGF remains relatively constant in our current and previous reports (9.9% vs 9.4%, respectively). This could be explained by the longer follow-up period, which may have mitigated possible modifications of risk factors of DWGF after our previous report.6 We found that DWGF was responsible for a quarter of graft losses among our patients. This concurred with the proportion (19.3%) reported by a similar single-center study conducted by Yu and associates,4 which had a comparable number of patients and follow-up duration. In addition, the proportion of DWGF/total graft losses among our patients decreased over time similar to what was observed by Yu and colleagues. This observation could be due to the shorter follow-up period of the more recent transplants. It could also be (at least partially) explained by improved patient survival due to greater attention paid to comor-bidities and the adoption of less toxic immunosup-pressive regimens.

Almost half of our patients received pretransplant blood transfusion, and only a small percentage had preemptive transplant procedures. This might reflect the late referral of patients with chronic kidney disease, the limited resources available for treatment of their anemia, and the shortage of transplant services in our country.5 In a study that analyzed United Network for Organ Sharing data of more than 47 000 living donor kidney transplants,7 preemptive transplant (31% compared with almost 5% in our study) was associated with better graft and patient survival. Hemodialysis is the principal modality of dialysis among our patients due to a shortage of peritoneal dialysis facilities in our country. Hemodialysis may be associated with an altered immune system, higher cardiovascular risk, and DWGF.8

The significantly higher prevalence of pretransplant blood transfusions in the DWGF group is a reflection of pretransplant anemia, which may have an impact on patient survival. In addition, it may lead to allosensitization9 with a subsequent impact on the posttransplant immunosuppression regimen and patient survival. On the other hand, higher HLA mismatch was noted in our DWGF group. This could also be explained by the need to adopt more aggressive immunosuppression protocols with subsequent higher infection and cardiovascular events.10

Antithymocyte globulin induction and cyclosporine-based protocols were more common and tacrolimus and mechanistic target of rapamycin (mTOR)-based regimens were less frequently reported among the DWGF group versus the AWGF group. Antithymocyte globulin induction carries the risk of infection and malignancy with subsequent lower patient survival.6,11 In addition, the steroid-free protocol is one of the tacrolimus-based regimens used by patients in our study and, therefore, is less commonly used in the DWGF group with a possible negative impact on patient survival. Furthermore, the use of mTOR-based protocols after transplant is associated with lower prevalence of malignancy12 and may favorably affect patient survival. The cumulative steroid dose after transplant was higher in the DWGF than in the AWGF group, agreeing with our earlier report6 and with the Collaborative Transplant Study (CTS) data, which showed an association between steroid dose and DWGF from CVD or infection.3

Causes of death and their order of frequency among our DWGF group were similar to those reported by the CTS.3,10 Cardiovascular disease was the most common cause of death among our DWGF patients, accounting for about one-third of mortalities. There was a preponderance of male patients among our DWGF group, which is similar to that reported by Yu and colleagues.4 Infection was the leading cause of DWGF throughout the whole follow-up period in our earlier report.6 In the present study, infection was the leading cause of death among our DWGF group during the first year posttransplant and the second-leading cause of death over the whole follow-up period. The introduction of a steroid-free regimen and routine antiviral prophylaxis in our program during the past 10 years16 may explain this difference. However, fatal infections (especially those due to viruses) have increased during the most recent era of our study. Similar results were reported by Yu and colleagues.4 This could be attributed to improvements in diagnostic techniques, especially those for viral infections.17 In both studies, respiratory pneumonia and bacterial infection were the most common site and cause of infection, respectively. The proportion of malignancy as a cause of death among our DWGF group increased over time after transplant. Posttransplant lymphoproliferative disease was the most common cause of fatal malignancy, agreeing with a previous report.4 Posttransplant malignancy is related to intensity of immunosuppression and infection. Kaposi sarcoma, which was previously the most common malignancy among our transplant patients, has not been reported for the last 10 years, possibly due to the use of less aggressive immuno-suppression and chemoprophylaxis.16 Overall, the highest prevalence of mortality among our DWGF patients occurred 10 years after transplant, a period after which CVD, infection, and malignancy are expected to increase.

Death with graft function remains an important contributor to graft loss among kidney transplant recipients. Cardiovascular disease, infections, and malignancy are the most common causes of DWGF among our patients. Attention to modifiable risk factors of CVD, strict vaccination policies, timed surveillance for malignancy, and less aggressive immunosuppressive protocols, such as a steroid-free regimen, are therefore, crucial to prevention of DWGF.

From the 1Nephrology and Transplantation Unit, Urology and Nephrology Center, Mansoura University, Mansoura, Egypt; and the 2Department of Nephrology, Faculty of Medicine, Zagazig University, Zagazig, Egypt
Acknowledgements: The authors have not received any funding or grants in support of the presented research or for the preparation of this work and have no declarations of potential conflicts of interest. .
Corresponding author: Mostafa Gamal Abu Gharbia, Urology and Nephrology Center, Mansoura University, Elgomhoria Street PO Box 35516, Mansoura, Egypt
E-mail: mostafa90@mans.edu.eg 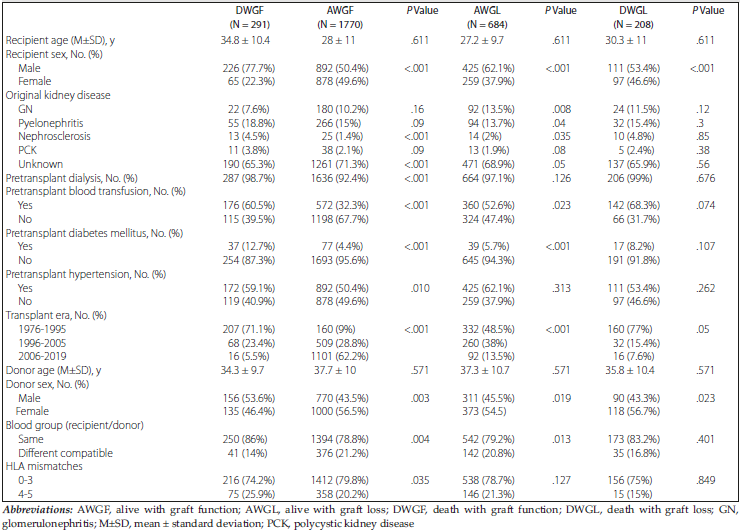 Table 1. Demographic Characteristics of Patients Who Had Death With Graft Function Compared With Other Patient groups 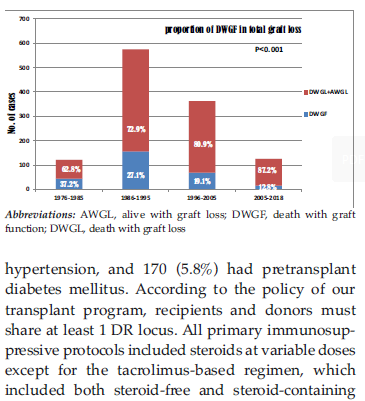 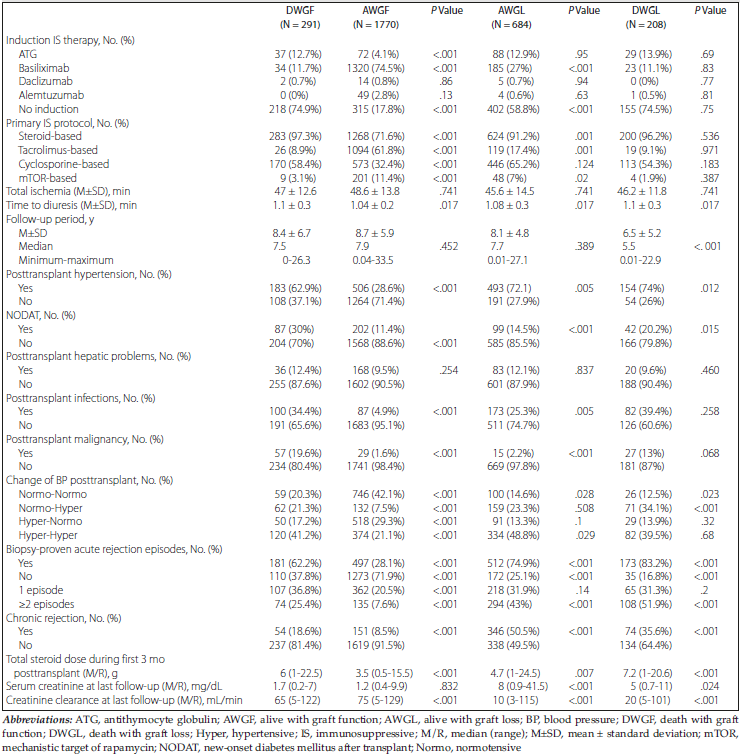 Table 2. Posttransplant Data of Patients Who Had Death With Graft Function Compared With Other Groups 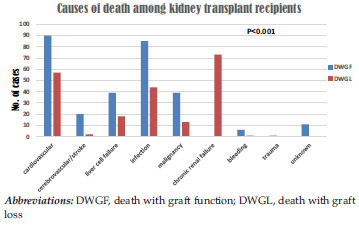 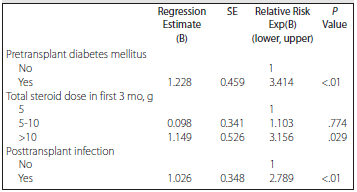 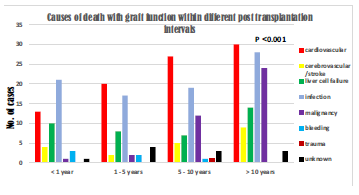 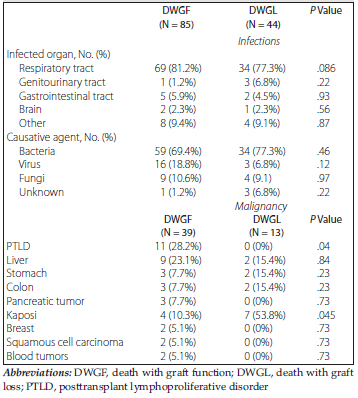