Following a 29-year history of primary biliary cholangitis, a 67-year-old female patient received an orthotopic liver and renal allotransplant from a deceased male donor. Primary biliary cholangitis is an autoimmune cholestatic liver disease that leads to progressive inflammation and fibrosis of the bile ducts. During the years between her initial diagnosis and her eventual decompensation necessitating liver and renal transplant, she was treated with ursodiol, a naturally occurring bile acid that is the current standard of care to slow the progression of primary biliary cholangitis. Her past medical history was also significant for hepatic encephalopathy, nonbleeding esophageal varices, nephrolithiasis, ascites, cholecystectomy, asthma, hypertension, gastroesophageal reflux, and osteoporosis. One month before transplant, she was admitted to our hospital with rapidly worsening ascites, diffuse anasarca, elevated creatinine, nonoliguric kidney disease, and fatigue.

After the liver and renal transplant, standard immunosuppression therapy was initiated. During the first 3 weeks, the allograft organs functioned normally. However, she soon developed neutropenia, hypotension, tachycardia, and fever concerning for sepsis. Chest radiography, urinalysis, and blood cultures were ordered to rule out infection. Urine cultures were positive for Escherichia coli and E. faecium, so the neutropenia was initially attributed to infection. Despite treatment for infection, the patient developed tachypnea, increasing tachycardia, and pleural effusion and was subsequently transferred to intensive care. As her condition worsened, the patient developed mild to moderate erythematous patches and macules with occasional scale on her lateral arms, knees, and buttocks.

The erythematous rash was clinically suggestive of either drug eruption or solid-organ transplant-related graft-versus-host disease (SOT-GVHD). A skin biopsy was histologically compatible with GVHD. A biopsy of sigmoid and rectum tissue was also suggestive of GVHD. Although the histologic features observed on both the skin and gut biopsies were consistent with GVHD, it was noted that drug-related toxicity could result in a similar morphologic appearance.

Cytogenetic analysis and chimerism testing were subsequently ordered to further elucidate the etiology of the patient’s symptoms. Chromosome analysis on a bone marrow specimen 6 weeks posttransplant revealed a 46,XY (male) chromosomal complement in each of the 20 metaphases analyzed. A fluorescence in situ hybridization (FISH) analysis was performed to better quantify the percentages of XY (male) and XX (female) cells, using probes for the pericentromeric regions of the X (DXZ1) and Y (DYZ3) chromosomes. There was a pattern consistent with an XY (male) donor complement in 97% of cells analyzed.

One week later, chimerism testing using the PowerPlex 16 HS system (Promega Corp.) was performed on a peripheral whole blood specimen. Briefly, this assay uses genotyping of short tandem repeat (STR) loci through polymerase chain reaction coamplification with fluorescently labeled primers, followed by characterization with capillary electrophoresis, to estimate the relative proportion of donor and recipient cells. The percentages corre-sponding to the donor and recipient genotypes were calculated at each marker and then averaged across all informative markers to provide a measure of the extent of engraftment. To aid in interpretation, the patient’s buccal swab was also evaluated to distinguish the differences between the patient’s own genotype and the inferred donor genotype. The initial engraftment studies indicated that greater than 95% of the cells (the upper limit of the linear range for this assay) in the whole blood specimen were of donor origin. Together with the clinical presentation and the results of skin and gut biopsies, the cytogenetic testing and chimerism studies supported a diagnosis of SOT-GVHD.

Over the next several weeks, additional cytogenetic analyses and chimerism studies were ordered to monitor the status of the GVHD (Figure 1). Granulocytes isolated from peripheral blood obtained 10 weeks posttransplant showed >95% donor cells. A second bone marrow specimen obtained 12 weeks posttransplant demonstrated >95% donor cells on chimerism studies and all 46,XY (male) cells on karyotype analysis. The FISH studies for this bone marrow specimen showed a probe signal pattern consistent with an XY male (donor) complement in 99.4% of the 500 nuclei scored, with only 0.6% of the 500 cells now having an XX pattern consistent with a female (patient) complement (significant increase in XY male [donor] cells; P = .012). This bone marrow biopsy also showed worsening pancytopenia and aplasia. These additional tests indicated that the donor engraftment of the lymphoid compartment was not a transient posttransplant observation. Unfortunately, this patient’s clinical status continued to deteriorate, and she passed away 4 months after transplant. An autopsy was declined by the family.

Although transient low-level donor lymphoid chimerism can be a normal finding after SOT, sustained levels of donor lymphocytes above 20% are consistent with SOT-GVHD.1 This is an uncommon consequence of SOT, with a reported incidence of 1% to 2% after orthotopic liver transplantation2,3 and fewer reports in association with renal transplants.4,5 Patients with SOT-GVHD have a high rate of mortality, with some estimates exceeding 75%.1 Patients with SOT-GVHD can present with maculopapular skin rash, gastrointestinal symptoms including anorexia, intestinal bleeding, pain, and diarrhea, and hematopoietic abnormalities such as neutropenia, which can progress to pancytopenia.1 Specific, although not pathognomonic, histologic findings of epidermal vacuolization and lymphocytic exocytosis can be observed on skin biopsy, and crypt apoptosis can be observed on gut biopsy.6 Eventually, many patients develop bone marrow failure and sepsis.6 Although the risk factors for developing SOT-GVHD are not well defined, some possible risk factors include HLA mismatching, older age, African American race, and certain viral infections.7,8 Currently, there is no consensus approach for treatment of SOT-GVHD,6 although there have been several recent case reports describing the use of the JAK1/2 inhibitor ruxolitinib with variable response rates.8,9

Chimerism studies are typically used to monitor successful engraftment following allogeneic bone marrow transplant. Our case illustrates a less common application of posttransplant engraftment analysis, specifically, the confirmation of a diagnosis of SOT-GVHD in a patient whose clinical status began to decline several weeks after receiving liver and renal transplants. This can be determined through STR genotyping of blood, blood components, or bone marrow specimens, with comparison to the patient’s buccal specimen. In the case of a transplant recipient whose donor has a different sex chromosome complement, cytogenetic analysis, including karyotyping and FISH, can also be used for this purpose.10

In our case presented here, chimerism and cytogenetic analyses of specimens obtained at 4 different time points provided evidence of near complete donor engraftment of the lymphoid compartment. Reports of SOT-GVHD with similarly high percentages of donor lymphoid cells in the peripheral blood and bone marrow are rare in the literature.

Systemic donor lymphoid chimerism is one of several important findings to confirm a diagnosis of SOT-GVHD, along with clinical and histologic findings. This case study demonstrated the utility of posttransplant engraftment studies and cytogenetic analyses (in the case of a donor and recipient pair with differing chromosomal sex) to monitor lymphoid chimerism in patients suspected or confirmed to have SOT-GVHD. With the consideration that the clinical presentation of SOT-GVHD can initially appear nonspecific and mirror those of more common posttransplant complications, such as an infection or drug reaction, chimerism studies are a helpful tool to rapidly diagnose this condition.

From the Departments of 1Pathology and 2Human & Molecular Genetics, Virginia Commonwealth University, Richmond, Virginia, USA
Acknowledgements: The authors have not received any funding or grants in support of the presented research or for the preparation of this work and have no declarations of potential conflicts of interest.
Corresponding author: Elizabeth S. Barrie, Department of Pathology, Virginia Commonwealth University Health System, 737 N 5th Street. Richmond, VA 23219, USA
Phone: +804 628 2993
E-mail: elizabeth.barrie@vcuhealth.org 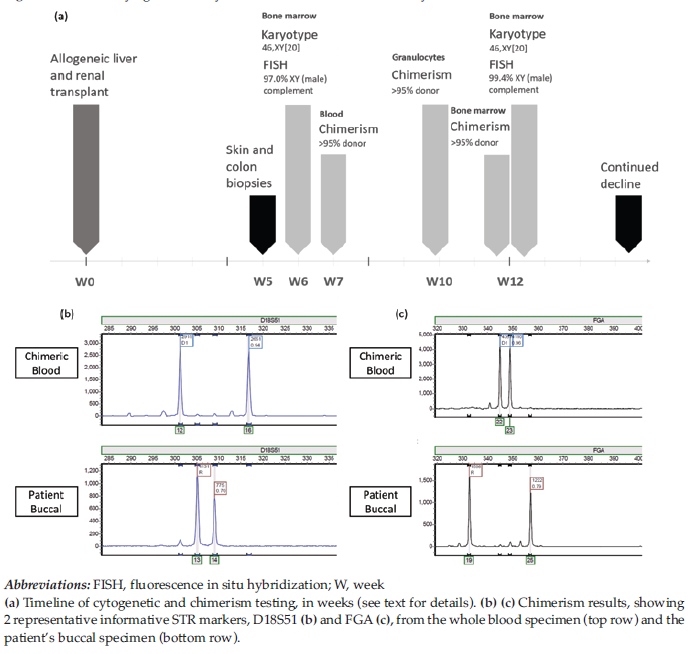