Objectives: End-stage kidney disease has dramatic health effects and life consequences in children. Presently, kidney transplant has been globally accepted as a treatment of choice for end-stage kidney disease in both children and adults, leading to better quality of life and longer patient survival. Because of lack of comprehensive information on the outcome of kidney transplant among children in Iran, we aimed to present a proper vision of pediatric kidney transplant in Iran by systematically reviewing the current literature.
Materials and Methods: Major databases were searched, including Medline, Web of Knowledge, Google Scholar, Scopus, Cochrane, and the Iranian Scientific Information Database for all eligible studies in accordance with specific keywords. The inclusion criteria for the retrieved studies were determination of graft survival, patient survival, and reasons for graft failure. The exclusion criteria were as follows: (1) a lack of clear results; (2) non-English or non-Persian language format; (3) lack of access to the full-text manuscripts; and (4) case reports, case series, and review papers. A total of 115 studies were initially assessed based on the keywords; of these, 8 met inclusion criteria and were considered for final analysis; these were published between 2005 and 2017.
Results: According to our results, 1-year graft survival rates were overall 89.7%, and 5-year graft survival rates were 65.4%. The 1-year patient survival rates were estimated to be 97.1%, and 5-year patient survival rates were estimated to be 89.8%. Acute rejection, dialysis status before transplant, and inappropriate immunosuppression were the main risk factors.
Conclusions: Our systematic review and meta-analysis indicated a high success rate of childhood kidney transplant in Iran according to long-term graft and patient survival rates.

End-stage kidney disease (ESKD) has dramatic health effects and life consequences in children, with a trend toward higher incidence rates worldwide. In the United States alone, with screening and precautionary approaches, the young population with ESKD is approximately 84.6 cases per million.1 Different etiologies have been identified as related to ESKD, including chronic glomerulonephritis, urological abnormalities, chronic kidney disease of unknown origin, renal dysplasia, hemolytic uremic syndrome, septicemia, hypertension, and obesity.2,3 Presently, kidney transplant is globally accepted as a treatment of choice for ESKD in both children and adults, leading to better quality of life and longer patient survival. Because of improved immunosup­pressive strategies and better control of postoperative complications, both graft survival and patient survival have improved considerably. However, graft failure remains a persistent undesirable outcome. Various factors are responsible for graft-related failure such as acute rejection, response to corticosteroids, and occurrence of opportunistic infections.4-6 Initially, the 10-year graft survival rate was only 20%7; however, survival has reportedly increased to more than 90% in recent years.8 In addition, survival of patients undergoing kidney transplant was much lower than for patients on dialysis, with 5-year survival rates after transplant and after hemodialysis in children estimated to be 80% and 93%, respectively.9,10 Unfortunately, we do not have any comprehensive information on the outcomes of kidney transplant among Iranian children, and variable results have been obtained. Hence, we aimed to present a proper vision of pediatric kidney transplant in Iran by systematically reviewing the current literature.

This study was performed according to established methods and in compliance with Preferred Reporting Items for Systematic review and Meta-Analysis Protocols (PRISMA-P).11 Two investigators searched manuscript databases, which included Medline, Web of Knowledge, Google Scholar, Scopus, Cochrane, and the Iranian Scientific Information Database,
for all eligible studies. Key words used for searches included the following: kidney, renal, transplantation, pediatrics, children, and Iran. The studies were restricted to English or Persian language. The inclusion criteria for retrieved studies were determined by graft survival, patient survival, and the reasons for graft failure. The exclusion criteria were as follows: (1) a lack of clear results; (2) non-English or non-Persian studies; (3) lack of access to the full-text manuscripts; and (4) case reports, case series, and review papers.

Data abstraction and validity assessment
Data abstraction was independently performed by 2 unblinded reviewers on structured collection forms without divergences in data collection. The study quality was evaluated based on the following criteria: (1) the systematic review and meta-analysis were based on the questions primarily described and formulated; (2) inclusion and exclusion criteria were predefined in the studies as eligibility criteria; (3) literature searches were performed by a systematic and comprehensive approach; (4) to minimize the bias, full texts of articles were dually reviewed; (5) the quality of included studies was rated independently by the reviewers for appraisal of internal validity; (6) study characteristics and findings were comprehensively listed; (7) the publication and risk of bias were listed; and (8) heterogeneity was also assessed.12 Along with the determination of the study end points, we also assessed the year of publication, the number of patients, and sex and age distribution. Of 115 studies that were initially assessed based on the keywords, 15 met the end point criteria; of those, 8 were complete and considered for final analysis.13-20 These were published between 2005 and 2017.

Statistical analyses
Dichotomous variables are reported as proportions and percentages, and continuous variables are reported as mean values. Binary outcomes from individual studies were combined with the Mantel-Haenszel fixed effect model. The odds ratio and 95% CI were used as summary statistics for the comparison of dichotomous variables between the radial and femoral approach. The Cochran Q test was used to determine the statistical heterogeneity of this study. This test was complemented with the I2 statistic, which quantifies the proportion of total variation across studies that is due to heterogeneity rather than chance. A value of I2 of 0 to 25% indicates insignificant heterogeneity, 26% to 50% low heterogeneity, 51% to 75% moderate heterogeneity, and 76% to 100% high heterogeneity. Publication bias was assessed by the rank correlation test and was also confirmed by the funnel plot analysis. Reported values were 2-tailed, and hypothesis test results were considered statistically significant at P = .05. Statistical analysis was performed with the Stata software (version 13.1).

Description of the study population
Overall, 8 groups of authors described their experiences on pediatric kidney transplant in Iran. Of 8 published studies, 7 were performed in Tehran, and 1 was performed in Shiraz. We could not find any report from other regions of the country. Summation of the results (Table 1) showed a total of 2240 kidney transplants among Iranian children.
The average age of children was 12.8 years (range, 11.5-15.8 years) with a male-to-female ratio of 1287/953. The follow-up time of the patients ranged widely from 1 to 20 years.

In a Turkish study from Haberal and colleagues, reflux nephropathy was the common renal disease among 56 pediatric renal transplant recipients, which requires a more accurate approach for detection and treatment.21 In a study conducted by Sozen and colleagues, the leading cause of death in children after transplant was bacterial infection (83.3%), and there was a strong need for invasive prophylaxis.22 Other studies have found acute rejection to be more frequent among recipients of grafts obtained from deceased donors than in recipients who had living related donors (25.5% vs 8.4%).22,23

The goal of a systematic review of the literature is to clarify a situation in a specific field that has variable conditions. In this regard, results of the review may lead to a homogenous finding, or, conversely, the results may show paradoxical results that emphasize the need for further research studies or trials in that field. Despite various studies on ESKD, dialysis, and kidney transplant among Iranian children, a systematic review of such studies has not been previously published. Therefore, we aimed to assess, through a literature review, the outcome of kidney transplant in the young Iranian population and to describe the main determinants of graft failure in this population.

Our systematic review and meta-analysis showed acceptable outcomes with respect to graft-based and patient-based survival after kidney transplant. Our results indicated a high rate of long-term success for kidney grafts in our young candidates. However, the main goal of the current study was to clearly assess the condition of Iranian pediatric kidney transplantation for the first time. Only 1 of the 8 included studies was from outside the Iranian capital, but this was not a limitation for our meta-analysis because the patients for the other studies were from many disparate parts of Iran, although the treatment was in Tehran. In addition, because of high variability in study samples, high heterogeneity was indicated in statistics related to long-term survival after kidney transplant. Different factors can affect homogeneity of systematic reviews such as the type of studies, the characteristics of study subjects, differences in inclusion and exclusion criteria, and differences in tools for measurement of study end points.

Our review showed a high rate of success for kidney transplant in the young Iranian population, with 1-year and 5-year graft survival rates of 89.7% and 65.4%, respectively, and 1-year and 5-year patient survival rates of 97.1% and 89.8%, respectively. To obtain more valid results on outcomes of childhood kidney transplant in our population, further cohort studies on populations in other regions of the country are highly recommended. 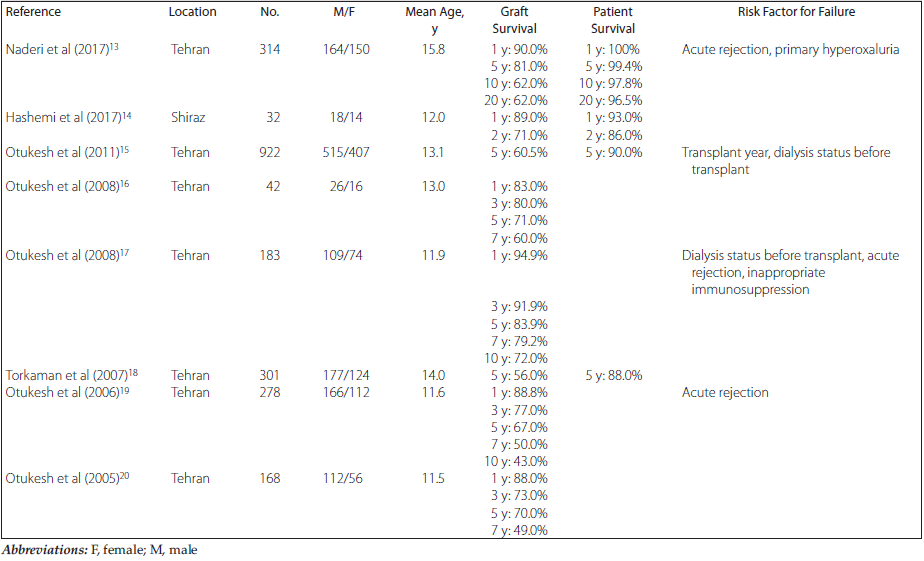 Table 1. Details of Studies on Outcomes of Kidney Transplant Among Iranian Children 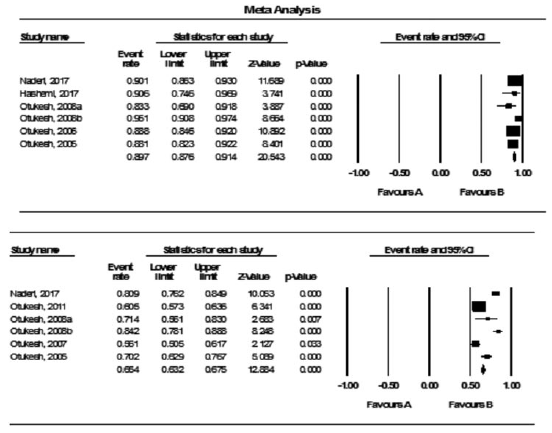 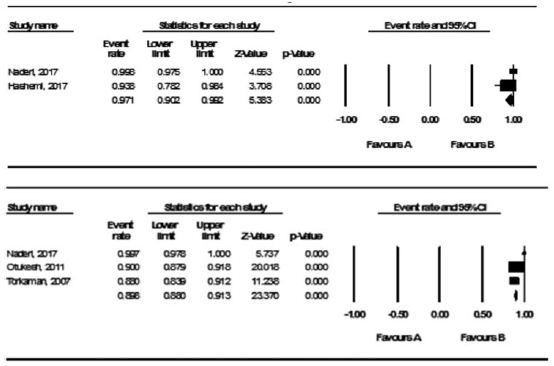