Sinusoidal obstructive syndrome (SOS) is a potentially life-threatening complication of hematopoietic stem cell transplant (HSCT). It is characterized by painful hepatomegaly, weight gain because of fluid overload, and hyperbilirubinemia in the setting of prior high-dose chemotherapy.1 The diagnosis of SOS is made clinically based on either the Baltimore criteria of hyperbilirubinemia (total serum bilirubin >2 mg/dL), tender hepatomegaly or right upper quadrant pain, and weight gain more than 5% over baseline or ascites or the Seattle criteria, which require 2 of these parameters to be met before the 20th day post-HSCT.2,3 In addition, hepatic venous pressure gradient >10 mm Hg and various histologic features such as edema, obliteration of hepatic venules, endothelial destruction, enlargement of the sinusoids, and eventual necrosis of zone 3 hepatocytes contribute to the diagnosis of the disease.4

Conditioning regimens given before HSCT result in the production of toxic metabolites by hepatocytes in the liver. These metabolites in turn trigger activation, damage, and inflammation of the endothelial cells that line the sinusoids.4 The overall incidence of SOS in HSCT recipients is 15%, although this varies depending on the criteria used for diagnosis and the type of transplant performed, with incidences reported to be as high as 62%.5

Most patients with SOS after bone marrow transplant recover spontaneously; however, 20% to 25% of patients can develop severe SOS, leading in general to multiorgan failure (MOF) and death.6 Chemotherapy, especially regimens using high doses of cyclophosphamide and busulfan or total body irradiation, has been associated with a high incidence of severe SOS and may contribute to its pathogenesis by generating liver toxins and inducing oxidative stress to sinusoidal endothelial cells and hepatocytes.6,7 Although liver transplant has been performed to treat SOS, reports by various liver transplant centers worldwide have been limited and disappointing.4 Consequently, the management of SOS presents a clinical challenge, and the decision to perform liver transplant is still somewhat controversial. Here, we report our experience of successfully treating a patient with SOS with deceased-donor liver transplant.

A 34-year-old male patient was referred to our department due to refractory ascites and jaundice. Previously, the patient was diagnosed with acute lymphoblastic leukemia (ALL); after he received a conditioning regimen of busulfan and fludarabine, the patient underwent a matched unrelated peripheral blood stem cell transplant. Within 1 month after peripheral blood stem cell transplant, he developed jaundice, ascites, and weight gain. The patient was clinically diagnosed with SOS and received defibrotide therapy. The patient was also treated for clinically suspected aspergillus pneumonia and cytomegalovirus viremia with voriconazole and ganciclovir, respectively. Despite therapy with defibrotide, his condition continued to deteriorate, as shown by development of intractable pleural effusion, ascites, and progressive renal failure. He also required hemodialysis 3 times per week for renal failure.

The patient was referred to our department for liver transplant. Hepatic venography and transjugular liver biopsy were performed for diagnostic confir­mation of SOS (Figure 1). His preoperative Model for End-Stage Liver Disease score was 29 (Table 1). A preoperative computed tomography scan revealed heterogenous parenchymal enhancement with large amount of ascites, hepatosplenomegaly, and collateral vessels (Figure 2). Because the recipient’s blood type changed from A to AB after peripheral blood stem cell transplant, he underwent deceased donor liver transplant from a donor whose blood type was AB (Table 1).

After transplant, the patient’s serum bilirubin levels and prothrombin time began to decrease. He received tacrolimus, mycophenolate, and steroids for immunosuppression. The histology of the excised liver was compatible with hepatic SOS (Figure 3). After treatment for pneumonia, pulmonary edema, and cytomegalovirus viremia, the patient was discharged 2 months after liver transplant. At 18 months posttransplant, although he was treated for fungal pneumonia and was being considered for kidney transplant due to unsuccessful weaning from renal replacement therapy, the patient showed stable liver function and no signs of either graft-versus-host disease or a relapse of ALL. In addition, polymerase chain reaction-polyacrylamide gel electrophoresis after stem cell engraftment showed good engraftment of allogeneic stem cells.

An increased understanding of the complex pathophysiology of SOS has led to the development of medical therapies aimed to arrest the progression of this disease. It is believed that SOS is a nonthrombotic obstruction of flow at the level of the hepatic sinusoid. It probably originates from swelling of endothelial cells that leads to dissection of the endothelial lining, which subsequently embolizes and blocks the microcirculation. Biochemically, SOS has been associated with decreased factor VII and protein C levels, increased plasminogen activator inhibitor-1, depletion of sinusoidal endothelial cell glutathione, and release of von Willebrand factor and angiotensin-converting enzymes from damaged endothelial cells.4 These observations have led to innovative therapies, including low-dose heparin, recombinant tissue plasminogen activator, prostaglandin E1 infusion, N-acetylcysteine, and defibrotide.8-13

Our patient was initially treated with defibrotide. Defibrotide, a single-stranded polydeoxyribonu­cleotide with fibrinolytic, antithrombotic, and antiischemic properties, has shown the most promising results in reversing severe SOS without increasing the risk of bleeding.14 Currently, defibrotide is the only drug approved in Europe and in the United States for the treatment of severe SOS following HSCT.14 However, our patient did not respond to this therapy and eventually required a liver transplant. Interestingly, the lack of efficacy of defibrotide has previously been described in patients who had received conditioning regimens with busulfan.4

A transjugular intrahepatic portosystemic shunt is another therapeutic option that has been considered for treatment of SOS. However, clinical experiences with this shunt in the setting of severe SOS after HSCT have been disappointing, with only a 17% rate of survival.15 Although clinical parameters such as hepatic portal venous gradient, bilirubin, creatinine, and ascites may improve, patients can still die from MOF and complications from coagulopathy and immunosuppressed state.16

Most patients with mild or moderate SOS will recover; however, severe cases of SOS are associated with a high mortality rate (84%) with progression that is typically fulminant with acute liver failure, coagulopathy, hepatic encephalopathy, hepatorenal syndrome, and MOF.17 Serum bilirubin levels and the percentage of weight gain within the first 2 weeks of HSCT have been reported to be the most important predictors of progression to severe SOS.4,17 Renal function is also an important predictor and is associated with high mortality in those patients who develop acute renal failure requiring hemodialysis.17

The decision to perform liver transplant as salvage therapy for SOS is still controversial and is based on a successful engraftment after HSCT with a low expected rate of recurrence of the hematologic disease, failure of medical therapy, and timely availability of a suitable donor before the onset of MOF. Unfortunately, there are no reliable predictors of liver recovery to aid in this decision, and the reported experiences in the medical literature are so far limited.

Membreno and associates reported their case and reviewed 14 previously published cases of SOS treated with liver transplant.4 Unlike our patient, they found that few patients survived more than 1 year. Similar to our patient, most received a bone marrow conditioning regimen with cyclophosphamide and busulfan, which is strongly associated with SOS. In the 3 patients who underwent bone marrow transplant or HSCT for ALL, none showed ALL recurrence after liver transplant. The authors suggested that, because 10 of 15 patients died from infection, patients undergoing liver transplant for SOS should be carefully selected. Unfortunately, their own patient required immediate transplant due to imminent MOF; because no suitable organ was found, the patient died 2 months after liver transplant. Membreno and associates concluded that, although medical therapies should be tried first, a concurrent evaluation for liver transplant should be conducted and that these patients should be listed and transplanted earlier rather than later.4

Infection is definitely one of the most feared complications in patients undergoing liver transplant for SOS because of the strong association with events leading to MOF and death.4,8-10 However, although patients with HSCT and severe SOS harbor an increased mortality risk, a small window for liver transplant exists as was the case in our patient. Although there are limited reports, most suggest that liver transplant should be considered if the patient has low estimated risk for hematologic malignancy recurrence, good engraftment of HSCT, histologically proven SOS, failure of medical intervention to reverse SOS, and no clinical evidence of sepsis or MOF.4,14,17

Although severe SOS in the setting of stem cell transplant is related to a poor prognosis, we suggest that deceased-donor liver transplant should be considered in managing select patients with life-threatening liver dysfunction after HSCT. 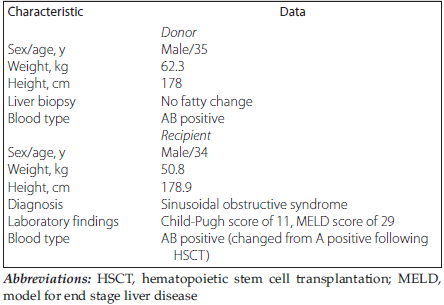 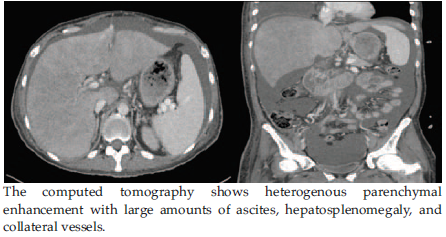 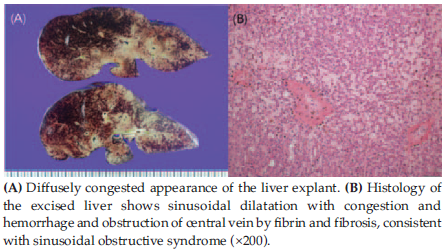