Portal vein thrombosis is a common complication in patients with cirrhosis and a challenge for the transplant team. Not so long ago, portal vein thrombosis was considered an absolute contrain­dication for liver transplant, but improvements in surgical techniques have overcome this problem in many transplant centers around the world. Here, we present the case of a 52-year-old female patient with cirrhosis from a primary biliary cholangitis and a complex portal vein thrombosis. She underwent a deceased donor liver transplant with a Model for
End-Stage Liver Disease of 40. The portal thrombosis was handled using a portosystemic shunt from the splenic vein to the left ovarian vein, which was visualized on a computed tomography scan performed as part of the study protocol. The donor was a 52-year-old woman with brain death secondary to a vascular cerebral accident. A caval replacement technique was used with no complications during surgery. For the portal anastomosis, the dilated left ovarian vein was carefully dissected and brought through the lesser sac, behind the stomach, to obtain a suitable length. An end-to-end anastomosis of the graft portal vein to the left ovarian vein was performed with a 6-0 Prolene running suture. An abdominal computed tomography scan was performed 6 months after liver transplant showing patency of portal vein and no anastomotic defects, and after 24 months of follow-up the patient is in good clinical condition with normal laboratory values and Doppler ultrasonography with no vascular anomalies and adequate portal flow. To our knowledge, the use of a spleno-ovarian shunt has not been reported as an alternative for portal reconstruction in a case of thrombosis.

Portal vein thrombosis (PVT) is a common complication in patients with cirrhosis and ranges between 5% and 16% in patients undergoing liver transplant (LT).1
The first series of successful LT in patients with PVT was reported in 1985 by Shaw and colleagues.2 However, up until the past decade, PVT was still considered a contraindication for LT by some groups around the world.3 For transplant centers that do perform LT with PVT, increased complexity of PVT may justify a contraindication at some transplant centers.
A complex PVT is defined as a Yerdel grade 4 and a Jamieson and Charco grade 3 and grade 4, and ranges from 0 to 2.2%.3 In these scenarios, a graft portal vein anastomosis with the superior mesenteric vein or a splanchnic or systemic shunt, with or without a graft, would be the first option to reestablish sufficient portal flow to the allograft.

A 52-year-old female patient was admitted to our center with liver cirrhosis from primary biliary cholangitis with upper gastrointestinal bleeding and decompensated hepatorenal syndrome. As part of the transplant protocol, a computed tomography scan showed a chronic PVT and a portosystemic shunt from the splenic vein to the left ovarian vein (Figure 1A and 1B); no other shunt or sufficiently large collateral was visualized.

She underwent a deceased donor LT, with a Model for End-Stage Liver Disease score of 40. The donor was a 52-year-old woman with brain death secondary to a vascular cerebral accident. Before completion of the receptor hepatectomy, the dilated left ovarian vein was carefully dissected and brought through the lesser sac, behind the stomach, to obtain a suitable length for the anastomosis without the need of a graft (Figure 1C); whenever possible we avoid the use of grafts. We used a caval replacement technique with a 3-0 Prolene running suture and an end-to-end anastomosis of the graft portal vein to the left ovarian vein with a 6-0 Prolene running suture. The graft was reperfused with no complications. After reperfusion, we performed an end-to-end arterial anastomosis with a 7-0 Prolene running suture and an end-to-end running suture with 6-0 polydioxanone for the bile duct. Intraoperatory Doppler ultrasonography was performed, to confirm adequate portal flow and velocity. The cold ischemia time was 6 hours and 39 minutes, warm ischemia was 54 minutes, and anhepatic phase was 61 minutes.

There were no complications during the surgery. An immediate graft function was observed with maximum level of aspartate aminotransferase of 699 U/L and alanine aminotransferase of 417 U/L. Follow-up Doppler ultrasonography at postoperative day 1 showed a permeable portal vein with a hepatopetal flow and a velocity of 53 cm/s. The patient was discharged with normal renal and hepatic function, and no anticoagulation was considered necessary because no graft was used and adequate blood flow was observed. An abdominal computed tomography scan was performed 6 months after LT and showed patency of portal vein and no anastomotic defects (Figure 1D). After 24 months of follow-up, the patient appeared to be in good clinical condition, with normal laboratory values, no other hospitalization events, a Doppler ultrasonogram with no vascular anomalies, and adequate portal flow and velocity of 28.8 cm/s. Splenomegaly was noted since before transplant with no growth or coronary steal phenomenon after transplant, and platelet count was in the normal low range.

Despite the fact that PVT is no longer considered an absolute contraindication for LT, decisions should be made on a case-by-case basis to consider a comprehensive pretransplant evaluation and center experience.

The most physiologically accurate reconstruction must be attempted to obtain the best possible results. A portal flow reconstruction is considered physiological when the splanchnic venous blood can be redirected to the liver graft resolve the portal hypertension, contrary to the nonphysiological alternatives that provide an adequate flow but do not allow the decompression of the portal system and allow portal hypertension to persist or worsen after LT. 3

Among the physiological options, the most frequent variceal veins to be used are gastric veins and choledochal veins. Other dilated veins that may be used are the right superior colic,7 middle colic,8 ileocolic,9 and gastroepiploic veins.3,10

The surgical technique should depend on the characteristics of the thrombus and its extension. For grade 1, an end-to-end portal anastomosis should be feasible, with eversion thrombectomy if necessary. For grade 2 and grade 3, eversion thrombectomy may also be useful; otherwise, an anastomosis at the confluence with the superior mesenteric vein is an option. If this is not possible, then anastomosis to the coronary vein or a large collateral must be attempted, and in absence of a suitable collateral vein, an interposition graft should be considered. For a grade 4 thrombosis, anastomosis to the coronary artery or a large collateral vein should be attempted. If there is no collateral vein available, then a renoportal or portocaval hemitransposition is another option.11

A spleno-ovarian shunt is rare and to our knowledge has not been reported as an alternative for portal reconstruction. Its use, however, has been reported to relieve portal hypertension.12

Dissection of the ovarian shunt was performed before completion of hepatectomy because these vessels tend to be thin and friable and the decision for the use of a graft was required in advance of the anhepatic phase.

Ovarian-to-portal vein anastomosis allowed us to make a physiological reconstruction, without the need of a graft, while adequate portal inflow was maintained, with no complications to the liver or the patient. 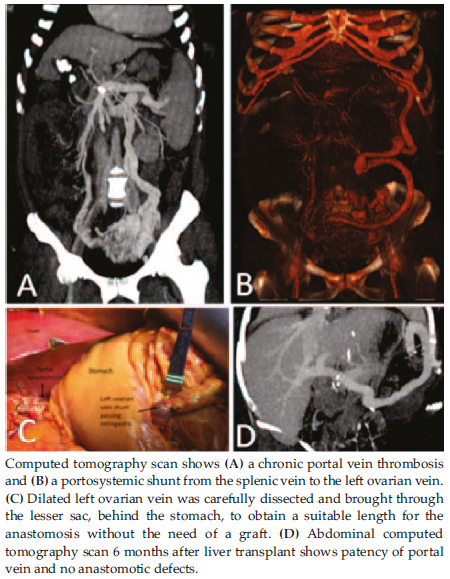