In this case report, we describe the first case of Phialemonium obovatum infection involving the renal allograft in a recipient beyond 1 year after living renal transplant. The patient presented with a locally invasive mycetoma caused by this melanized fungus in the anterior abdominal wall, which extended during the hospital stay to involve the allograft. The fungus was identified by its characteristic micromorphological features present on potato dextrose agar and Sabourad dextrose agar and on subsequent slide cultures. The patient did not survive despite repeated surgical procedures, including partial allograft nephrectomy and broad-spectrum antifungal medications. Other cases of Phialemonium infections involving renal and stem cell transplant recipients are reviewed.

Phialemonium is categorized as a dematiaceous or melanized fungus.1 It was first described by Gams and McGinnis in 1983,2 is widely found in the environment, and has been isolated from soil, water, air, and sewage.1,2 Since the fungus was first observed, very few reports of human disease caused by Phialemonium have been reported, and a total of 4 cases have involved this emerging fungal pathogen in renal transplant recipients.3-5 We report the first case of Phialemonium infection involving the allograft in the form of a locally invasive mass in a renal transplant recipient.

The index patient was a 41-year-old man with end-stage kidney disease (basic disease unknown) who underwent living unrelated ABO-compatible kidney transplant in May 2018 (the donor was his wife, aged 28 years and with 5/6 mismatches). He received antithymocyte globulin at a cumulative dose of 4 mg/kg as induction and tacrolimus, mycophenolate mofetil, and prednisolone as maintenance immuno­suppression. Prior to his discharge after transplant, he developed wound infection at the graft site and was treated with reexploration, incision and drainage, and broad-spectrum antibiotics. Subsequently, he remained well with stable graft function on a regimen of tacrolimus (4 mg/day, with cyclosporine trough levels between 5 and 8 ng/mL), myco­phenolate mofetil (1.5 g/day), and prednisolone (7.5 mg/day). In August 2019, he presented with fever and with pain and lumpiness near the allograft site. The fever was high grade and intermittent and was not associated with chills and rigors. The pain was sharp, continuous, and localized over a lump felt in the right iliac fossa close to the allograft, and it had worsened in severity over the 10 days preceding presentation. On examination, he was anxious, tachypneic, and febrile, and he had a palpable ill-defined, tender, soft swelling adjacent to the incision site. There was no erythema or obvious pus discharge, and the allograft was nontender to palpation. The rest of the physical examination was unremarkable.

He underwent ultrasonography, which showed a hypoechoic collection close to the allograft, followed by computed tomography, which localized the collection to the fascial and muscle planes in the anterior abdominal wall. The patient was then given intravenous ceftriaxone (2 g/day), and the collection was aspirated under ultrasonographic guidance on day 4 of hospitalization. Approximately 10 mL of clotted blood-like material was aspirated and sent for microbiological studies. However, because the collection persisted despite aspiration, open incision and drainage were carried out on day 7 of the hospital stay.

A biopsy of the aspirated material suggested acute inflammatory changes. A potassium hydroxide (KOH) mount of the direct sample showed brown pigmented conidia with septate hyphae (Figure 1a); accordingly, treatment with voriconazole (200 mg/day) was started. Over the next 7 days, the microbiologist reported growth of creamy white colonies on Sabourad dextrose agar, which turned brownish on the sides. Based on its micromorphological characteristics, the fungal growth was identified as Phialemonium obovatum on day 14 (Figure 1, a-d). Liposomal amphotericin B (2 mg/kg/day) was added to the treatment with voriconazole on day 12.

Because repeated ultrasonography carried out in the subsequent days showed persistent collection in the abdominal wall extending into deeper planes, surgical exploration and wound debridement were carried out on day 15 of hospitalization. In the next 20 days, the collection was repeatedly drained, and 2 follow-up cultures continued to grow whitish brown colonies. Bacterial blood and pus cultures were sterile. Voriconazole was replaced with posaconazole (400 mg/day) on day 37 because resistance to voriconazole was suspected, and treatment with amphotericin B was continued. On day 40, the patient developed bleeding from the drain site, for which computed tomography angiography was done that showed extension of the collection to involve the graft (Figure 2). After urgent reex­ploration, the margins from frozen sections were found negative for fungal invasion, and partial allograft nephrectomy was performed. The tissue obtained during debridement showed the presence of epithelioid granulomas with foreign body giant cells among muscle fibers with brown-pigmented fungal hyphae, along with foci of hemorrhages and necrosis, suggestive of fungal mycetoma (Figure 3).

Subsequently, the patient developed refractory septic shock, oliguric acute allograft dysfunction, and type I respiratory failure, for which he received vasopressors, continuous venovenous hemodia­filtration, and mechanical ventilation. Despite this treatment, he died on day 46 of the hospital stay.

Mycology Fungal culture was performed on Sabourad dextrose agar and potato dextrose agar, and cultures were incubated at 25 °C and 37 °C. After 5 to 7 days of incubation, the obverse showed whitish to creamy cottony colonies turning brown, with brownish patches on the sides, and the reverse showed pale buff to brownish pigment (Figure 1, b-d). Lactophenol-A cotton blue mount (known as LCB mount) after slide culture showed short adelophialides (phialides formed singly along the hyphae, with no septum at the base to delimit it from the hyphae and phialides). The conidia were oval and appeared slightly cut off from the base (Figure 1e). Old colonies became greenish, and further incubation resulted in brown spots on the colony (Figure 1b). The fungus was identified as Phialemonium obovatum on the basis of macroscopic and microscopic morphology.6

Infections caused by melanized fungi predominate in immunocompromised individuals. Melanin is thought to contribute to the virulence of these microorganisms because of its antioxidant properties, and this can explain the occasional occurrence in immunocompetent hosts as well. Because these are ubiquitous in nature, the most common predisposing factor is a breach of the natural skin barrier.1 The morphological characteristics of Phialemonium are thought to be halfway between those of hyaline Acremonium and the pigmented Phialophora.1 Phialemonium is classified as a melanized or dematiaceous fungus because it has melanin on its cell wall and has septate hyphae.7 The very first description of Phialemonium as a human pathogen was published in 1986.8

Melanized or dematiaceous fungi commonly cause 3 types of infection histologically, namely, eumycetoma, chromoblastomycosis, and phaeo­hypho­mycosis, all of which represent localized skin and soft tissue infections.1 In contradistinction, previously recorded cases of Phialemonium revealed a substantial proportion of disseminated infections with isolation of the fungus from blood. The high incidence of fungemia with Phialemonium is possibly related to formation of unicellular propagules, a property also seen with Fusarium and Acremonium, as postulated by King and associates in 1993.3 However, in our case, the infection behaved as a locally invasive mass lesion starting in subcutaneous tissue and extending deeper into the fascial planes.

A search of existing literature showed that a total of 39 cases of Phialemonium-associated human infections have been described so far, with a range of presentations, such as mycetoma, endophthalmitis, keratitis, peritonitis, arthritis, brain abscesses, meningitis, endocarditis, and fungemia, some of which were reviewed by Rivero and colleagues in 2009.9 Some of the predisposing factors in the reported cases were a history of renal or stem cell transplant, end-stage kidney disease on hemodialysis with arteriovenous grafts, a history of burns, or intracavernous injections for erectile dysfunction.9-14 The characteristics of the 4 cases of renal and stem cell transplant recipients with Phialemonium infection are presented in Tables 1 and 2, respectively. Of the 4 cases in a renal transplant setting, 2 cases presented as mycetomas and responded to prompt surgical management in addition to antifungal therapy.3 One other case was possibly a hemodialysis-associated endovascular infection with Phialemonium endocarditis and endophthalmitis in a patient with allograft failure on immunosup­pression with cyclosporine and steroid treatment.4 Lastly, in the case reported by Aydin and colleagues,5 the source and route of infection were unclear, with the patient finally dying from multiple brain abscesses, and cerebrospinal fluid culture showed growth of Phialemonium molds. To the best of our knowledge, the index patient is the only case with spread of Phialemonium to the allograft. In stem cell transplants, 3 of the 4 cases were in patients who underwent allogenic transplants, and Phialemonium infections were recorded in the first 6 months posttransplant in patients who manifested with acute graft-versus-host disease just a few days before the presence of infection.10,12-14

In the absence of noted trauma to the abdomen, the only other source of mycetoma in our patient was the wound site infection in the peritransplant period. However, pus cultures from the previous wound site were sterile, and skin healing was slow but complete. Also, such prolonged dormancy (18 months) was not described in the earlier reports. It is more likely that our patient suffered an unnoticed trauma to the graft site with cutaneous fungal inoculation, which was aided by concomitant hematoma formation in the anterior abdominal wall. Unfortunately, the patient showed no clinical response to a combination of antifungal drugs, in addition to local surgical procedures, and died despite having no evidence of angioinvasion or intravascular spread. In general, in vitro antifungal susceptibilities indicate that P. obovatum is resistant to amphotericin B and triazoles, and P. curvatum is generally susceptible to voriconazole and posaconazole, apart from amphotericin B.9,11 The antifungal drug susceptibility of P. obovatum isolates across previous cases is presented in Table 3.11-13,15

In the present case, pathogen identification was made based on micromorphological features on Sabouraud dextrose agar and LCB mount, and molecular analysis was not performed. Also, in vitro drug susceptibility testing was not carried out. However, continued growth of characteristic molds in repeated pus cultures over a course of 5 weeks suggested that the isolates were resistant to amphotericin B and voriconazole.

We describe the first case in the literature of a locally invasive mycetoma with an allograft infection caused by Phialemonium obovatum, a dematiaceous fungus, in the late posttransplant period in a renal transplant recipient who died from the disease despite treatment with repeated drainage, partial nephrectomy, and antifungal therapies including triazoles and amphotericin B. This case should alert nephrologists and microbiologists to this emerging pathogen to avoid misidentification and therapeutic delays. 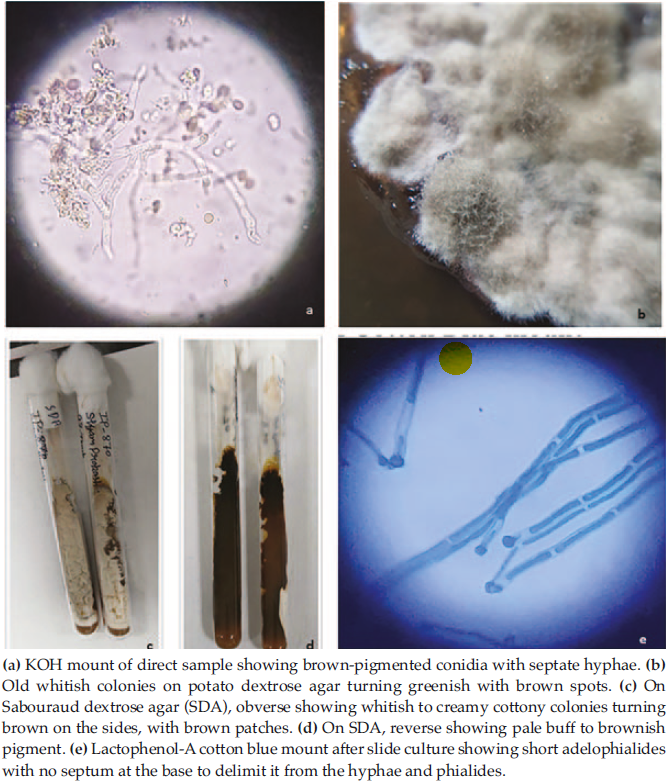 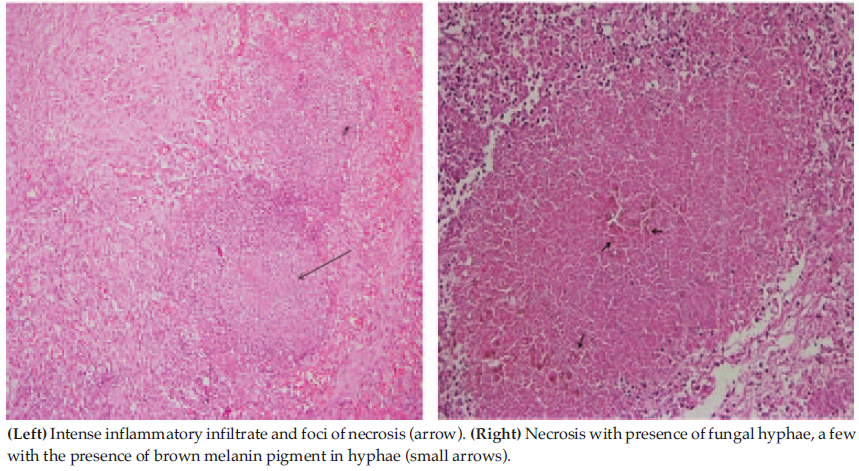 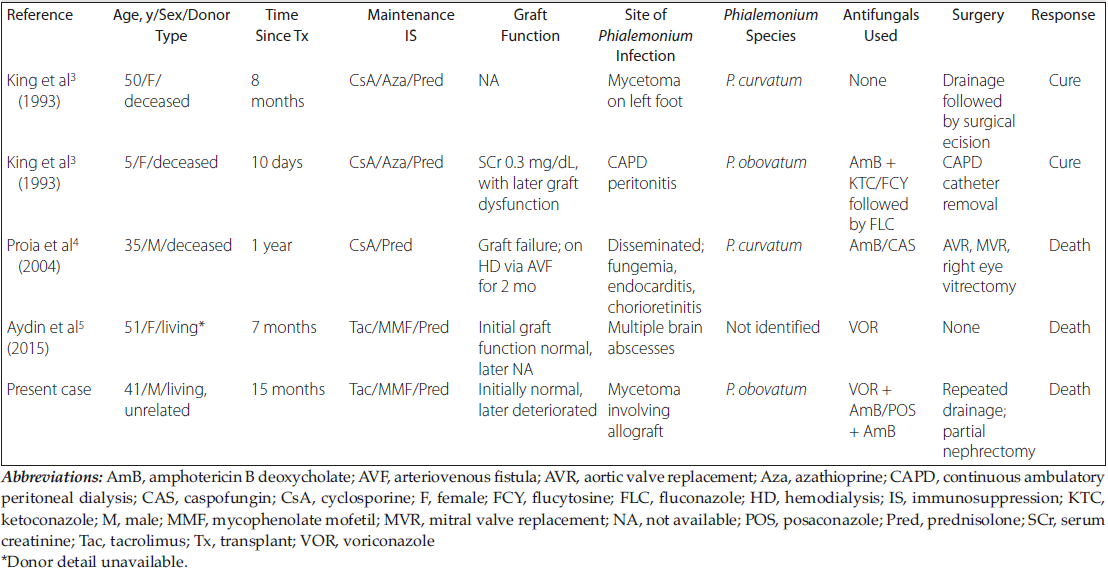