Objectives: Our aim was to identify factors associated with overall survival and the efficacy of postrelapse treatment protocols and to determine whether pretransplant consolidation therapy and minimal residual disease status pose a survival benefit.

Conclusions: Relapse is the most important predictor of overall survival and is associated with poor prognosis. Pretransplant minimal residual status and cytogenetic status showed no effect on relapse rates and overall survival, and consolidation therapy did not improve outcomes.

Acute myeloid leukemia (AML) is a clonal neoplasm derived from progenitor cells with varying outcomes.1 The initial goal is achieving complete remission (CR); however, without treatment after remission, most patients relapse.2 Although allogeneic stem cell transplant (allo-SCT) is an effective treatment option, even after allo-SCT, a significant number of patients (about 30%-40%) will eventually relapse.3 Relapse remains the major cause of treatment failure. Unfortunately, therapeutic strategies are limited, and there is no standardization of further therapy once relapse occurs.4 Thus, the prevention of relapse is important to improve survival rates, and novel strategies should be developed for this purpose.

All patients who were diagnosed with AML and underwent hematopoietic stem cell transplant (HSCT) between 2007 and 2018 at the Adana Baskent University Hospital Hematology Department were enrolled in this retrospective, single-center cohort study. In our center, the criteria for transplant are as follows: having a matched and suitable donor, having a good Eastern Cooperative Oncology Group performance status (0-1 status), being refractory to chemotherapy, and having an intermediate or unfavorable cytogenetic risk or having a favorable cytogenetic risk but being refractory to chemo-therapy. Patients younger than 18 years, those with relapsed AML within 30 days of transplant, and/or those with unavailable relapse date or conditioning regimens were excluded.

Data were obtained from standard forms that were created for transplant patients in the Nucleus Electronic Data Management System (version 9.3.39; Monad Software Co., Ankara, Turkey). Protocols were in accordance with the Joint Accreditation Committee: International Society for Cellular Therapy and the European Group for Blood and Marrow Transplantation Accreditation criteria. A data audit group checked all data. The study received approval from our institution’s ethics committee.

From our database, we selected consecutive patients who (1) had a diagnosis of AML according to World Health Organization criteria,7 (2) had under-gone allo-SCT, and (3) were treated between 2007 and 2018. A total of 76 patients who provided written informed consent according to institutional policy fulfilled these criteria and were included in the study.

All patients were treated with a myeloablative or a reduced-intensity conditioning (RIC) regimen. A myeloablative regimen was used in patients who received autologous or allogeneic transplant. Donor sources included matched related, 1 mismatched related, haploidentical, matched unrelated, or 1 mismatched unrelated. For patients who had allogeneic transplant procedures, the myeloablative regimen included total busulfan of 12.8 mg/kg intravenously (on days -5, -4, -3, -2), total fludarabine of 150 mg/m2 (on days -6, -5, -4, -3, -2), and total antithymocyte globulin of 30 mg/kg (on days -4,-3, -2) (total body irradiation of 400 cGy), with graft-versus-host disease (GVHD) prophylaxis of cyc-losporine (starting on day -2) and methotrexate 8 mg/m2 (on days 2, 4, and 8). For patients who had haploidentical transplant, the regimen included intravenous busulfan 9.6 mg/kg on days -5, -4, and 3; fludarabine 150 mg/m2 on days -7, -6, -5, -4, -3; and cyclophosphamide 14.5mg/kg/day on days -7 and -6, with GVHD prophylaxis of cyclophosphamide 50 mg/kg on days 3 and 4, tacrolimus starting on day 5, and mycophenolate mofetil. For RIC regimen, patients received total intravenous busulfan of 9.6 mg/kg (on days -4, -3, -2), total fludarabine of 150 mg/m2 (days -6, -5, -4, -3, -2), antithymocyte globulin of 30 mg/kg (days -4, -3, -2), and GVHD prophylaxis of cyclosporine and methotrexate.

All patients were assessed for response according to International Working Group criteria.13 Complete response was defined as bone marrow blasts < 5%, absence of blasts with Auer rods, absence of extramedullary disease, absolute neutrophil count > 1.0 × 109/L, and platelet count > 100 × 109/L. Overall survival was calculated from the day of diagnosis until death from any cause or the last follow-up. Patients who achieved CR with a remission induction therapy were categorized as having CR1, and patients who achieved CR only after salvage therapy were categorized as having CR2.

The diagnosis and grading of acute GVHD were performed according to the consensus conference on acute GVHD.14 Chronic GVHD was diagnosed and graded based on published criteria.15 Relapse after allo-SCT was confirmed based on bone marrow aspirate according to standard criteria.16 Treatment of relapse consisted of (1) an intensive salvage regimen with high or intermediate dose level of cytarabine, associated or not with gemtuzumab and/or an anthracycline17; (2) a nonintensive salvage (low-dose cytarabine, demethylating agents, com-bination of oral chemotherapy or investigational drugs); and (3) supportive care with or without oral cytoreductive therapy such as hydroxyurea. The use of DLI was determined according to the availability of donor cells, previous history of GVHD, and clinical status. Patients in CR following salvage chemotherapy received cytarabine-based consolidation regimens and/or second transplant and/or DLI. Criteria in accordance with Cheson and colleagues were used to assess the response after salvage therapy.13

In this retrospective study, we showed that MRD or cytogenetic status of AML patients before transplant did not have any effect on the relapse rate or OS. We also demonstrated that consolidation therapy did not improve outcomes. Overall survival in patients who developed GVHD during the posttransplant period was similar to that shown in patients who did not develop GVHD. There were no significant dif-ferences shown between having favorable, unfa-vorable, or intermediate cytogenetic risk status. A total of 66.7% of patients with progressive disease died during the study period. This rate was 27.1% in patients with CR status.

It has been reported that assessment of MRD after induction therapy and at different points thereafter has a prognostic importance5 and that achieving a negative MRD status before allo-HSCT reduces relapse risk.18 Thus, achieving MRD-negative status with additional therapy is believed to be associated with improved survival. In our institution, MRD status was assessed after induction therapy, and if MRD-negative status could not be achieved reinduction therapy was administered. We aimed to perform transplant in patients who were MRD negative; however, if MRD negativity could not be achieved with reinduction therapy, patients undergo transplant. In the present study, although the relapse rate was decreased and OS was improved in CR MRD-negative patients, the differences were not significant. In addition, MRD status was not an independent predictor of relapse or OS. Hourigan and associates reported that MRD is used in clinical practice to guide the care of individual patients, but more data are required to establish the use of MRD as a surrogate endpoint for clinical trials in AML.19 Recently, in the consensus document from the European LeukemiaNet MRD Working Party, it was reported that, although adding MRD status to remission assessment can optimize long-term outcomes, these approaches have not yet been qualitatively or quantitatively standardized, making it difficult to use clinically.20 These results show that the predictive role of MRD status on clinico-pathologic progress of AML remains unclear.

The cytogenetic status is considered one of the most important prognostic markers predicting remission, relapse, and OS.21 In the current study, clinical outcomes associated with the Southwest Oncology Group coding pretreatment risk criteria/cytogenetic scores were assessed and it was found that, although not significant, the OS in patients with unfavorable cytogenetic status was worse than that shown in the favorable and intermediate status groups. However, in the regression model, cytogenetic status was not found to be an independent predictor of OS or relapse. Our results are similar to other studies in which cytogenetic status was not found to be a prognostic factor.21,22 Tallman and associates reported similar disease-free survival and OS in 3 cytogenetic risk groups and reported that transplant-related mortality was higher in their favorable and intermediate risk groups. They suggested that transplant-related mortality might have negated any advantage that favorable or intermediate cytogenetic risk groups might have otherwise had because of lower relapse rates.22 In the present study, except for GVHD, other factors that may be related with transplant-related mortality, such as cytomegalovirus viremia, were not included in our statistical analyses. In addition, although transplant is not performed in patients with favorable cytogenetic risk, patients refractory to chemotherapy with favorable cyto-genetics are considered as having adverse risk. In these patients, there may be undetectable mutations.

Outcomes of HSCT in CR2 are generally poorer than outcomes of HSCT in CR1.23-25 In the present study, patients in the CR1 group showed an improved OS compared with patients in the CR2 group. In general, the probability of achieving CR2 after chemotherapy is low and earlier allo-SCT would be the optimal approach. Therefore, we believe that transplant should be performed on time and should not be reserved for CR2 patients.

Our results confirm that patients with AML who relapsed after allo-SCT have poor outcomes. The mean survival time from relapse was estimated to be 22.4 ± 4.1 months and 3- and 5-year OS rates were 23.5% and 0%, respectively. In regression analysis, having a GVHD was found to have a 3-fold protective effect for relapse development. No other risk factors were found to be related to relapse development in the present study.

There is no consensus on a standardized post-relapse treatment protocol.4 Different institutions use different protocols; however, intensive chemotherapy with or without DLI, nonintensive chemotherapy with DLI, a second allo-SCT, and supportive care are among the commonly preferred treatment options.29 In our institution, we also prefer these treatment options based on the development of GVHD, cytogenetic status, age, and the clinical conditions of the patient. In our study, relapse was seen in 27 patients; when postrelapse treatments were compared with respect to OS, it was found that none of the treatment protocols had significant superiority over others. However, although not statistically signi-ficant, patients who received intensive salvage therapy plus DLI had a longer mean survival time than the other treatment groups. Previous studies reported that the best outcomes are achieved in patients who receive intensive chemotherapy followed by a second allo-SCT or DLI.30-33

Relapse is the most important predictor of OS, after which the prognosis is poor. The most important strategy is the prevention of relapse. We found that pretransplant MRD and cytogenetic status did not affect relapse rates and OS. We also observed no improved outcomes when we compared conso-lidation therapies. Progressive disease status prior to allo-SCT was associated with poor prognosis, and patients who were transplanted in CR1 had better OS than patients who received transplants in CR2. 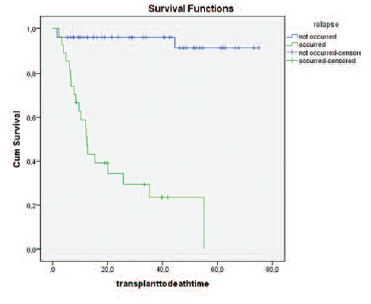 Figure 1. Overall Survival of Patients With and Without Relapse 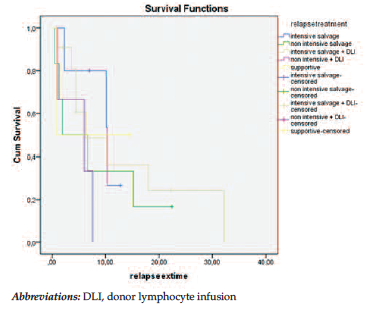 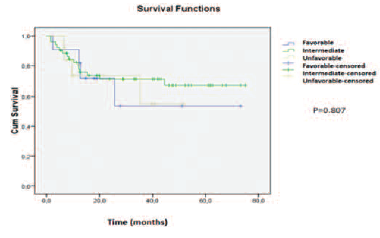 Figure 3. Comparison of Survival Probability With Respect to Cytogenetic Status 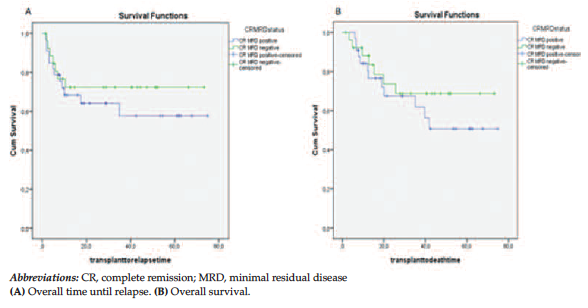 Figure 4. Comparison of Survival of Patients in Complete Remission With Respect to Minimal Residual Disease Status 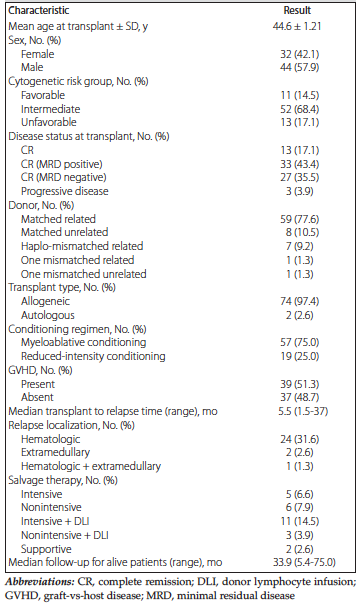 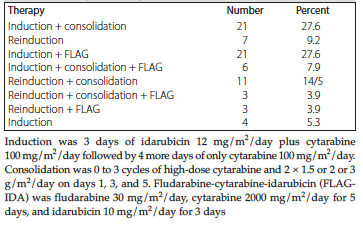