In addition to selection of an optimal organ donor, standardized organ retrieval, and transplant by an experienced transplant surgeon, the preservation of a pancreatic graft plays a major role in successful transplant outcomes. Currently, 2 perfusion solutions are mainly used worldwide for abdominal organ preservation: University of Wisconsin solution (UW; Bridge to Life) and histidine-tryptophane-ketoglu­tarate solution (HTK; Custodiol, Dr. Köhler Chemie). The composition of both solutions varies considerably. University of Wisconsin solution has a high viscosity and is a potassium-rich, sodium-depleted, osmotically active fluid comparable to the intracellular milieu. Histidine-tryptophane-ketoglutarate solution is a crystalloid fluid that contains only low quantities of potassium or sodium, comparable to the intercellular space.1

Several retrospective studies have demonstrated comparable outcomes with both preservation solutions in clinical pancreas transplant (PT) procedures.2-5 However, these studies either reported low case numbers or average graft ischemic times of <12 hours. It could be shown that long-term pancreas graft survival was best with <12 hours of cold ischemic time (CIT).6 Only 1 prospective, randomized multicenter study has shown comparable results with HTK and UW solutions in 68 patients undergoing PT. Notably, this study had a mean pancreas CIT of <12 hours.7 In addition to these studies showing comparable outcomes with both perfusion solutions in PT, some studies have reported negative effects of HTK use, such as early graft loss, allograft pancreatitis, rejection, and thrombosis, especially during prolonged cold ischemia periods.8-10

Since 2007, after a decision by the German organ procurement organization and its advisory boards, HTK solution has been used as the standard solution in abdominal organ retrieval in Germany because of limited availability of UW solution due to a production problem. Therefore, the aim of this retrospective study was to compare the results of PT using UW and HTK solutions, with particular emphasis on transplants with CIT ≥12 hours. The hypothesis was whether the use of HTK solution, compared with UW solution, is associated with worse pancreas graft survival in general and after CIT ≥12 hours.

From September 2002 to September 2012, 240 PTs were performed at our center, with most (n = 218, 90.8%) being simultaneous pancreas-kidney trans­­plants (SPK). Pancreas after kidney transplant was performed in 16 patients (6.7%) and PT alone in 6 patients (2.5%). All patients had type 1 diabetes. Until 2007, the UW solution was mainly used, after which the HTK solution was adopted. Among these 240 PT procedures, the HTK solution was used for 133 grafts and the UW solution for 107 grafts. In the HTK group, 52 grafts with a CIT ≥12 hours could be identified, whereas, in the UW group, 44 were identified.

The primary objective of this study was to investigate patient and graft survival after 1, 3, and 5 years according to the preservative solution used. Pancreas graft failure was defined as a return to exogenous insulin therapy, explant of the organ, or patient death. Kidney graft failure was defined as patient death with a functioning graft, allograft nephrectomy, or the need for permanent dialysis or retransplantation. With regard to graft pancreatitis, the serum levels of amylase, lipase, and C-reactive protein (CRP) were assessed on postoperative days 1 to 7 and were compared for both groups. We have chosen this period because, in our experience, the greatest variability of amylase and lipase levels exist within the first week after PT; in addition, other studies have investigated the first postoperative days. Therefore, a good comparability is given. Surgical complications during the primary inpatient stay were also recorded. The demographic data of donors and recipients were reviewed and evaluated. The analyses were repeated in a subgroup with a CIT ≥12 hours. The analyses comprised data from the patients’ files, laboratory values derived from the electronic databank, as well as the Eurotransplant donor reports.

As described in detail by Walter and associates,11 the transplants were performed via a median laparotomy with arterial anastomosis of the pancreatic graft to the right iliac artery and portal venous or systemic venous drainage. In the case of SPK, the kidney was transplanted on the left side. Exocrine enteral drainage was performed with either duodenojejunostomy or duodenoduodenostomy.

All patients received induction therapy with either thymoglobulin (n = 220) or interleukin 2 receptor antagonists (with daclizumab up until 2007 and with basiliximab since 2007; n = 20) followed by triple immunosuppression with calcineurin inhibitors, mycophenolate mofetil, and steroids. Tacrolimus therapy was started on the first postoperative day with a twice daily dose of 0.15 mg/kg of body weight. Target blood trough levels were 10 to 15 ng/mL during the first 2 months and 8 to 12 ng/mL thereafter. Mycophenolic acid therapy was also started on the first postoperative day with either mycophenolate mofetil 2 g daily or mycophenolate sodium 720 mg twice daily. The steroid regimen consisted of 500 mg prednisolone intraoperatively and 250 mg prednisolone on posttransplant day 1. Thereafter, steroids were steadily tapered from 20 mg on day 2 to 5 mg by day 60.

The chi-square test and the Fisher exact test were used to compare categorical variables. The differences in continuous variables between the groups were analyzed using t test for normally distributed data and the Mann-Whitney U-test for nonnormally distributed data. Patient and graft survival rates were calculated using the Kaplan-Meier method based on the log-rank test. A multivariable analysis, with time until organ loss or death of the patient as the dependent variable, was performed using Cox regression models. P < .05 was considered statistically significant. The analysis was performed using SPSS version 23 (SPSS: An IBM Company).

The study was approved by the local ethics board of the Faculty of Medicine at the Ruhr University of Bochum, Germany (registry number: 2015-5262).

Recipient characteristics are presented in Table 2. Recipients in the HTK group were significantly older, had a higher body mass index, a longer mean dialysis duration before transplant, and a longer operation time. Duodenoduodenostomy for enteric drainage was more frequent in the HTK group, whereas jejunal anastomosis was more common in the UW group. The amount of solution perfused differed between the 2 groups (5433 ± 1983 mL in the UW group and 10 133 ± 2150 mL in the HTK group; P < .001).

Because of the imbalance between suitable grafts and the large number of patients on wait lists, donor and recipient pools have been expanded. Especially in the case of grafts from extended criteria donors, optimization of graft preservation is essential for graft function after pancreas and kidney transplant. Previous studies have shown comparable clinical results when HTK or UW solution was used.2,3,5 However, HTK has been shown to be associated with a higher complication rate in cases of prolonged CIT. For example, Stewart and colleagues9 reported reduced pancreatic graft survival, especially with CIT ≥12 hours. In a review by Hameed and colleagues,12 risk of reperfusion damage could be reduced with the use of UW solution. In a study from Hoeger and colleagues, kidney function and tissue damage after kidney transplant with prolonged CIT and UW perfusion were superior to results shown with the use of HTK perfusion.13 Nevertheless, HTK solution is used as the standard preservation solution for PT in Germany.

In our HTK group, which reflects the more modern period, patient age and BMI at transplant were higher and dialysis duration was longer. Thus, it can be assumed that the preoperative risk was higher in the HTK group. Laboratory analyses in the first postoperative week showed significant differences between the HTK and UW groups, with serum concentrations of amylase, lipase, and CRP being higher in the HTK group. Nevertheless, the use of HTK solution showed significantly better pancreas graft survival. In contrast, some studies have reported a 30% increased risk of graft loss when HTK is used compared with UW solution.9 However, in our study, the preservation solution had no influence on patient survival. Comparable results for patient survival were also obtained in our subgroup of PT cases with CIT ≥12 hours, in which pancreas and kidney graft survival rates were similar. As reported by Troisi and colleagues,14 changes in cellular structures can influence membrane permeability. In addition, HTK is reported to be associated with more edematous grafts than UW solution.9 Although we observed elevated markers of inflammation in the HTK group, pancreas graft survival was worse in the UW group. A significantly higher perfusion volume is recommended when using HTK, which may be a reason for pronounced edema and graft pancreatitis. Despite the higher volume, there is a cost advantage for the use of HTK solution.8 As described by Latchana and colleagues,15 an increased rate of thrombosis has been observed when using the HTK solution; however, we could not confirm this in our evaluation of data from our center. A possible explanation could be the stricter anticoagulation protocol in the HTK group, which was adjusted in our center after a retrospective evaluation.16

In this study, we analyzed 2 different time periods. This may be a possible limitation when interpreting our study. However, several parameters, such as immunosuppressive therapy regimen, leading surgeons, and ischemia times, remained essentially constant across the study periods. The longer operation time in the HTK group can be explained by the introduction of duodenoduodenostomy as a new drainage technique. The fact that this technique was more commonly performed in the HTK group explains the significantly longer operation times.

Because of the routine use of HTK solution in abdominal organ transplant procedures, the choice to use different perfusion solutions is limited. Some studies have investigated modified solutions and extracorporeal machine perfusion. Rauen and colleagues demonstrated a reduction in cold-induced damage to hepatocytes by adding an iron chelator to HTK and reducing its chloride content.17 A modified HTK solution (Custodiol-N) has also been investigated in cardioplegia, and it led to improvements in myocardial and endothelial function after cardiac bypass surgery.18 The variable application of different solutions and the modification of established solutions could possibly prove advantageous.

Over the time period of our study, an increasing acceptance of marginal donor organs could also be observed. This was certainly the result of the existing organ shortage in Germany. Ziaja and associates had reported that older donor age is associated with an increased risk of infection, rejection, and even death of the recipient.19 The donor age in the HTK group was significantly higher in our analysis than in the UW group (P = .019), which confirms the tendency toward less restrictive acceptance of donor organs in the HTK group. A more liberal attitude toward patients with BMI of ≥30 has also contributed to the expansion of the recipient pool. Laurence and colleagues reported that SPK in recipients with a BMI of ≥30 is not associated with increased organ loss.20 Similarly, our analysis showed an increased number of recipients with a BMI of ≥30 in the historically younger HTK group.

Especially against the background of creating optimal conditions for the transplantation of marginal organs, prospective studies should be carried out to investigate the influence of preservation solutions on outcomes of pancreas-kidney transplant procedures. So far, only the study by Schneeberger and colleagues showed comparable patient and graft survival using a prospective study design.7

The direct comparison of results after PT with HTK versus UW perfusion solutions showed better pancreas graft survival in the HTK group. However, this is also the more modern group where other medical advances may have had a positive effect. When pancreas grafts with a CIT ≥12 hours were considered, better results were obtained in the UW group. In particular, early graft pancreatitis, according to serum CRP, lipase, and amylase, appeared to be milder in UW-perfused pancreas grafts. Therefore, it would be advisable to consider using UW solution in cases with expected CIT ≥12 hours.

Our multivariable analysis showed that the perfusion solution did not significantly influence patient and graft survival. A prospective study comparing UW and further developments of the HTK solution (e.g., Custodiol-N) would be desirable. 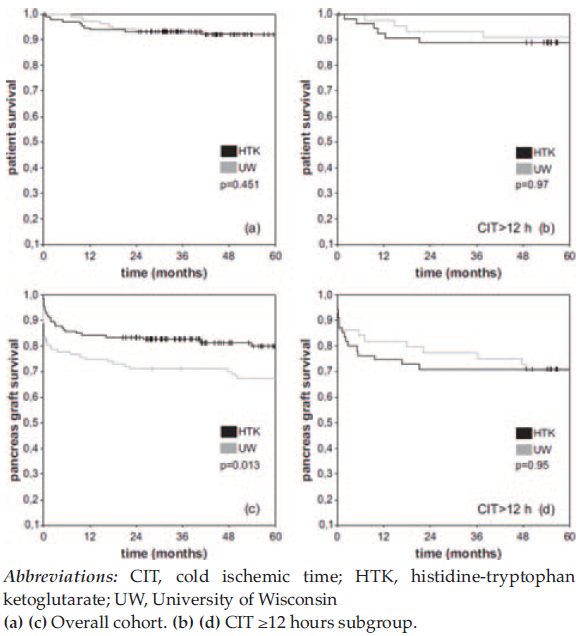 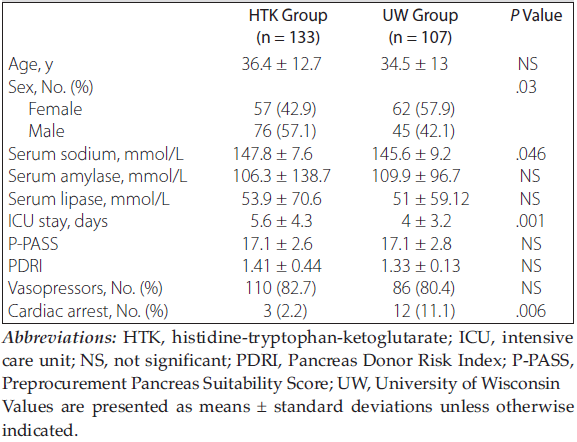 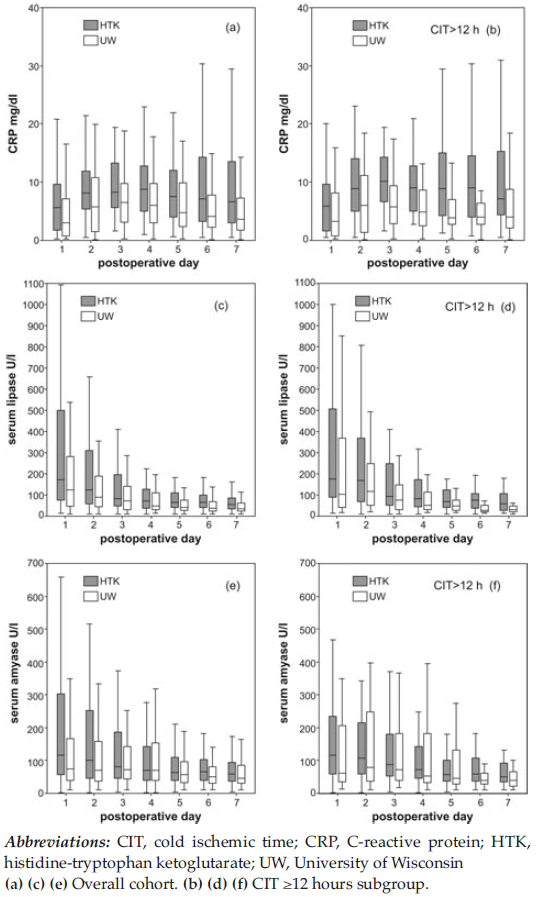