Cytomegalovirus (CMV) and human herpesvirus-6 (HHV-6) are members of the beta-herpesvirus subfamily. Generally, these viruses have high seroprevalence and vary based on socioeconomic status. After primary infection, both CMV and HHV-6 infections remain latent in the endoplasmic reticulum system and may be reactivated intermittently depending on the host immune status.

The incidence of CMV and HHV-6 infections among liver transplant patients ranges widely, between 14% and 82%1,2 and 11% and 72%,3,4 respectively. The different variations could be due to different ages, use of different CMV prophylactic regimens, and different sensitivities of diagnostic tests.

The 2 variants of HHV-6 are HHV-6A and HHV-6B, with the latter one being the most prevalent. It has been shown that HHV-6 can accelerate the course of other viral infections, such as HHV-7, human immunodeficiency virus, and CMV.5 Subsequent to HHV-6 immunomodulatory effects and/or direct CMV interactions, CMV-associated diseases can develop.6 Human herpesvirus 6 infections typically occur during the first 2 to 6 weeks after liver transplant, whereas CMV reactivation occurs 3 to 10 weeks after liver transplant, when the level of immunosuppression is the most intense. The most common clinical presentations of both viral agents in posttransplant patients include fever, neutropenia, central nervous system manifestations, and other visceral involvements.7

Reactivation and reinfection of HHV-6 usually occur at earlier stages of immunosuppressive administration, compared with other opportunistic infections.8 Therefore, we evaluated the burden and potency of HHV-6 in reactivation, development of rejection, and the occurrence of diseases due to CMV infection among liver transplant recipients.

Patients
This prospective study included 46 patients who underwent deceased-donor liver transplant at the Nemazi Hospital (Shiraz University of Medical Sciences, Shiraz, Iran). Our ethics committee approved the study design and procedures, and written informed consent was obtained from guardians or the patients. The study was carried out between April 2015 and April 2017. In total, 493 clotted blood samples (to collect serum samples) and 493 corresponding oxalated samples (to isolate polymorphonuclear [PMN] cells; average of 10.7 samples per patient) were obtained weekly from liver recipients for up to 3 months. Patients who died during the follow-up period were excluded.

Study patients received triple drug therapy of various combinations of tacrolimus or cyclosporine, mycophenolic acid, and corticosteroids as anti-rejection treatment posttransplant. Patients were regularly monitored for CMV and HHV-6 infection during the first 3 months after transplant.

Cytomegalovirus and human herpesvirus 6 DNAemia monitoring
Taq-man real-time PCR was used to quantify CMV and HHV-6 DNA duration after liver transplant. Amplification was carried out using a commercial kit from Primerdesign (Camberley, UK) on serum and PMN samples for CMV DNAemia monitoring and serum specimens for HHV-6 DNAemia follow-up, using 10 μL of the extracted DNA. The method was performed in accordance with the manufacturer’s protocol.

Of total study patients, 17 (37%) showed CMV-associated illness (8 males and 9 females); differences in terms of biological sex and illness were not significantly different (P = .21). Most symptomatic CMV-associated patients were in the 1- to 5-year age range (Figure 1).

Cytomegalovirus and human herpesvirus 6 seroprevalence and correlation with cytomegalovirus-related diseases
As shown in Table 1, immunoglobulin G (IgG) antibodies to CMV and HHV-6 were detected in 42 (91.3%) and 41 (89.1%) of the 46 liver recipients before transplant, respectively. Nearly 37% (17/46) of patients who underwent liver transplant presented with CMV-related diseases. Among symptomatic patients, 13 (76.5%) were seropositive for both CMV and HHV-6 infections.

Antigenemia
The pp65-antigenemia test for CMV infection was positive in half of our liver transplant patients (n = 23), with 17 of these patients (73.9%) having CMV-associated diseases and 6 (21.1%) without any symptoms of CMV diseases.

The mean CMV load in the serum samples of symptomatic patients was 12 064.59 ± 43 copies/mL, whereas mean CMV load was 215.68 ± 92.51 copies/mL in asymptomatic patients, showing significant differences between these groups (P = .008). The mean values of CMV DNA burden of PMNs were 56 735.56 ± 7797 copies/2 × 105 cells and 195.56 ± 2630 copies/2 × 105 cells in symptomatic and asymptomatic liver transplant recipients, respectively. A positive correlation was seen between clinical signs and antigenemia levels in these patients (P = .001). In addition, a statistically significant relationship was observed between antigenemia burden and serum sample levels (P = .008).

Human herpesvirus 6 viral load in serum samples
Table 2 shows that 25 liver transplant recipients (54.3%) presented with HHV-6 infection after transplant, with 14 of these patients having CMV coinfection.

Our statistical analyses revealed that there was a positive correlation between clinical evidence of exposure and HHV-6 positivity rate (P = .02).

This cross-sectional study revealed that, in liver transplant recipients, HHV-6 infection is associated with an increased risk of CMV recurrence and the development of CMV-associated diseases. In our study, most symptomatic patients ranged from 1 to 5 years old. It could be argued that negative serology played the main role; however, our statistical analysis did not show any significant difference between varying age groups (P = .35).

The peaks of CMV viral load were 34 210 and 1020 copies/mL in symptomatic and asymptomatic patients, respectively, according to Harma and associates.6 The corresponding values in our study were 1206 and 215 copies/mL in sera samples, which were lower.

We and other studies revealed that HHV-6 is reactivated before CMV infection.6,18,19 Therefore, it can serve as an independent predicting factor for CMV infection prognosis. We suggest that severe immunosuppression may cause a high risk of reactivation of both HHV and CMV; we also cannot rule out the role of virus-virus interactions in organ transplant.

Our data demonstrated that HHV-6 DNAemia is common in liver transplant recipients and usually occurs before CMV infection. Virus-virus interactions and severe immunosuppression can explain this phenomenon. 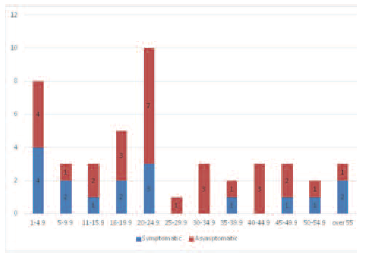 Figure 1. Distribution of Cytomegalovirus Symptomatic and Asymptomatic Patients According to Age (in years)