Reduction of ischemic reperfusion damage is crucial to facilitate the best success of orthotopic liver transplant (OLT).1,2 In recent years, OLT has become relatively standardized, and initial portal vein reperfusion (PVRP) with subsequent arterial revascularization has become the most common method of graft reperfusion.3 However, several methods of revascularization have been developed, which include initial hepatic artery reperfusion (HARP) or inferior vena cava (retrograde) revascu­larization and simultaneous revascularization via the portal vein and hepatic artery.4,5 There have been conflicting reports over which method has superior outcomes in terms of the least ischemic reperfusion damage.6,7 Although oxygen saturation is greater in the hepatic arterial circulation, the greater blood flow through the portal venous system makes its oxygen supply comparable.8,9 The few studies in this field have not found statistically significant differences in graft function, reperfusion injury, or outcomes between initial HARP versus PVRP.10 Although some meta-analyses have been conducted to compare the outcomes of liver transplant between HARP and PVRP in liver transplant, which is the better method remains controversial.7,11

We hypothesized that initial HARP may be bene­ficial over initial PVRP because of rapid oxygenation of graft and especially biliary structures and could be used to achieve hemodynamic stability.

The aim of this study was to compare the outcomes of initial HARP versus PVRP in terms of intraope­rative hemodynamic stability, incidence of acute rejection, hepatic artery thrombosis, biliary leakage or strictures, and portal and hepatic venous thrombosis/stenosis. We also sought to identify differences in graft function indexes and 30-day and 90-day morbidity and mortality.

Surgical procedure
Liver recovery was performed by aortic flush and rapid retrieval after cooling at 4 °C. Bile was removed from the gallbladder in situ, and the bile duct was flushed after transection. The portal vein was flushed in situ through the inferior mesenteric vein. The portal vein was reflushed with the preservation solution during back-table preparation. No arterial back-table pressure perfusion was performed. Liver allografts were preserved with static University of Wisconsin solution in all cases in this series. The OLT was always performed by the same surgical team using piggyback technique with outflow anastomosis on side-to-side cavocaval anastomosis with no portocaval temporary shunt in any cases. Before reperfusion of the graft, the liver was flushed with 1000 mL of 5% albumin solution at 37 °C to remove air and perfusate through the entire inferior vena cava of the graft. Next, the middle part of the cavocaval anastomosis was closed by tightening of the 3-0 Prolene stitch. The ischemic time was intended to be less than 10 hours, with preservation of caval flow, to maintain hemodynamic stability during the anhepatic stage. In a few cases of size mismatch between donor and recipient bile duct, an internal stent was placed. All grafts were whole liver. Portal vein anastomosis between the graft and the recipient were performed with end-to-end continuous suture with 5-0 Prolene, and arterial reconstruction was performed with continuous 6-0 Prolene. Cold and warm ischemia times were determined, respectively, as the period between cross-clamp and graft inside the abdomen and between the graft in the abdomen and reperfusion.

In the PVRP group, the graft was revascularized through the portal vein and the hepatic artery was subsequently performed; the time interval between portal and arterial revascularization was recorded and defined as arterial ischemic time. In the HARP group, the graft arterial and venous reconstructions were performed simultaneously; the hepatic artery clamp was opened first to reestablish arterial blood flow to the graft, followed by release of the portal clamp after 10 minutes. In 2 patients, portocaval shunt was performed to minimize the stasis of the portal territory. The bile duct was reconstructed in all cases by end-to-end duct-to-duct anastomosis by running suture with 6-0 polydioxanone.

Reperfusion syndrome was defined as a decrease in mean arterial pressure greater than 30% below the baseline for a minimum of 1 minute during the first 5 minutes of reperfusion. Primary nonfunction was defined as the need for retransplant or death due to graft failure within 7 days in the absence of technical problems. Biliary complications were detected when clinically evident and confirmed by magnetic resonance cholangiopancreatography or endoscopic retrograde cholangiopancreatography.

Data collection and analyses
Demographics, cause of native liver failure, type of hepatic artery, bile duct, and portal vein anastomoses, blood product usage, and 90-day morbidity and mortality were recorded. The radial and femoral arterial blood pressures were assessed intraoperatively and recorded. Intraoperative use of vasopressors and antifibrinolytics was also recorded. Prothrombin time, partial thromboplastin time, international standardized ratio, hematocrit, and platelet count were measured after surgery as indexes of synthetic function and hematologic status at discharge. Incidence of arterial or venous thrombosis, biliary stricture, anastomotic leak, bacterial and viral infection, length of intensive care unit stays, length of hospital stays, and number of readmissions within 90 days were recorded. These data were compared between HARP and PVRP groups.

Univariate and multivariate logistic regression were performed with SAS software.

The optimal method of liver reperfusion during transplant is still a matter of debate.10,12 Although initial portal venous revascularization has become the more widely used method in OLT, there have been conflicting reports regarding which methods of revascularization have superior outcomes.4,13 The rationale for using PVRP is that the volume of portal blood flow to the liver is greater than that of the hepatic artery, and, despite its low oxygen saturation, the portal vein is thought to deliver a comparable amount of oxygen to the hepatic artery.13 This is based on the experience that portal blood flow alone is sufficient for adequate hepatocellular function. The argument against initial PVRP is that the bile ducts are exclusively supplied by the hepatic artery, and initial PVRP results in delay of oxygenation of the bile ducts that may lead to warm ischemic damage.14,15 Additionally, portal venous blood alone in a progressively rewarmed graft may induce ischemic reperfusion injury of the liver and further deteriorate ischemic biliary tree. Initial HARP in liver transplant has theoretical advantages over initial PVRP in terms of reduced warm ischemia of the graft biliary tree.13 Additionally, the arterial anastomosis is performed under better technical conditions, without retrograde bleeding from the graft hepatic artery and in a surgical field without hemorrhage. In contrast, prolongation of the warm ischemia time and anhepatic phase can be harmful to the liver graft and therefore worsen liver function, graft survival, and patient survival. In a previous controlled study of revascularization that compared HARP and PVRP, HARP was shown to have shorter operative time, better graft reperfusion, and reduced need for intraoperative blood transfusions.7 However, there were no significant differences between HARP and PVRP in terms of prevention of ischemic biliary injury.16,17

In our study, there were no statistically significant differences between initial HARP and PVRP in terms of complication rates measured at 3 months and 1 year after the procedure. Recovery of graft function and graft survival rates were also similar. A delay in arterial inflow in an exclusively portal-perfused liver potentially prolongs the warm ischemia time to the bile ducts and may contribute to the development of bile duct strictures. Biliary stenosis has been associated with hepatic artery problems and with prolonged cold and warm ischemia times.18 Others have sought to determine complication rates in donation after cardiac death livers using initial HARP to reduce the incidence of biliary complications.7 There are increasingly more studies reporting that retrograde reperfusion from the vena cava lowers the risk of initial nonfunction but increases the risk of ischemic biliary injury, which suggests that initial venous reoxygenation might be detrimental to the biliary epithelium.19,20 Polak and Porte also reported that no differences in nonanastomotic intrahepatic biliary strictures were observed between initial PVRP and simultaneous portal and arterial reperfusion.6 In contrast, some studies have reported that simul­taneous portal and arterial reperfusion is safe and feasible and reduces the incidence of intrahepatic biliary strictures by reduction of the duration of arterial ischemia to the intrahepatic bile ducts.14 We did not find a difference in terms of biliary leakage or biliary stenosis between HARP and PVRP. However, initial HARP significantly reduced the amount of intraoperative blood transfusion. This may be attributed to improved hemodynamic stability. Some studies have shown that initial HARP resulted in more stable mean arterial pressure, central venous pressure, cardiac index, systemic vascular resistance, and pulmonary capillary pressure.21

Because of the similar rates of complications and reduction in the amount of blood required for procedures, our conclusion is that initial HARP followed by PVRP is a method comparable with initial PVRP in patients undergoing primary OLT. Prospective randomized controlled trials to evaluate initial HARP within a larger patient population may be warranted. 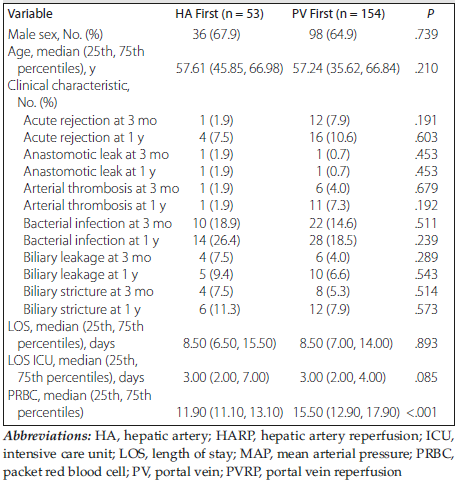 Table 2. Intraoperative Use of Vasopressors and Antifibrinolytics in Study Groups 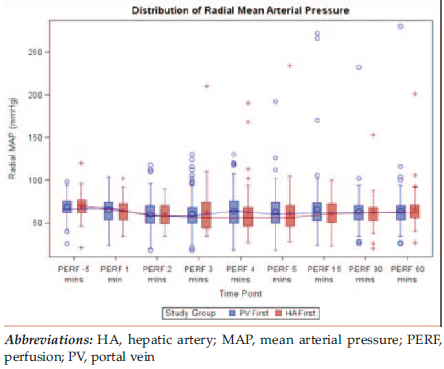 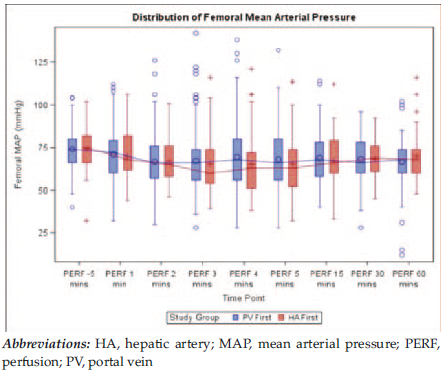 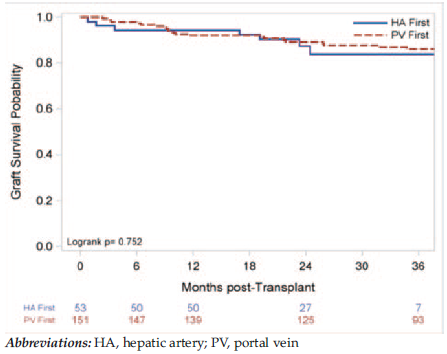 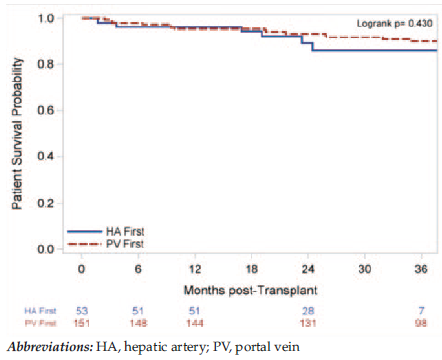