In dual graft liver transplant (DGLT), the coexistence of 2 grafts can induce functional inhibition and lead to atrophy of the nondominant graft.1 Previous studies have suggested that the initial, bigger-volume graft has better regeneration than the smaller-volume graft as a result of superior portal venous blood flow.2 In addition to the role of portal blood supply, hepatic arterial flow may also have an influence on intergraft competition. Studies on single donor liver transplant have demonstrated the beneficial effects of graft rearterialization ongraft function and regenerative response.3 Whether equal effects might be implicated in DGLT has remained unelucidated, as the interaction between the 2 grafts can add an important factor.4 Here, we report a rare case of impaired left hepatic arterial flow and left lobe graft atrophy in a DGLT recipient.

A 52-year-old male patient with hepatitis C-related liver cirrhosis was admitted for living donor liver transplant. The potential donors were his daughter and his younger brother. Volumetric computed tomography analysis of his daughter’s liver showed a relatively small right liver lobe, corresponding to only 38.2% of the recipient’s standard liver volume. The safe limit of the graft volume has been reported to be ?50% of the recipient’s standard liver volume.5 The right liver lobe graft of his brother would have met the recipient’s metabolic demand, but the prospective remnant left liver was less than 35% of the total liver volume. Therefore, neither of the 2 probable donors was suitable as a single donor, and we decided to perform LDLT using dual grafts (Table 1).

We planned to retrieve the right liver lobe of his daughter together with the left lobe of his brother to get an adequate graft volume. Future liver remnants were adequate in both donors (47.5% for donor 1 and 69.3% for donor 2).

The left lobe graft was orthotopically placed to the recipient’s left lobe position and the graft’s left hepatic vein was anastomosed end-to-side to the recipient’s inferior vena cava. Anastomoses of the left portal vein was also performed in an end-to-end fashion. The left hepatic artery of the graft was anastomosed to the common hepatic artery of the recipient, for which the recipient’s great saphenous vein was used as an interposition graft because of insufficient vessel length. An ultrasonography then also showed regular portal, venous, and arterial flow in the left graft. Thereafter, the right lobe graft’s bile duct was anastomosed end-to-end to the common bile duct of the recipient with T-tube insertion. The left graft’s biliary reconstruction was achieved with a Roux-en-Y hepaticojejunostomy.

The recipient’s postoperative course was uneventful, without any evidence of small-for-size syndrome. Postoperative complications such as hemorrhage and bile leakage were not observed.

On postoperative day 7, Doppler sonography evaluation revealed impaired left hepatic artery inflow perfusion, although the right hepatic arterial flow and the portal and venous flows in both grafts were excellent. Surprisingly, the recipient’s liver function was not deteriorated, and peritonitis was absent. A computed tomography scan demonstrated complete atrophy of the left graft and compensatory regeneration of the right graft (Figure 1B).

Left graft atrophy in a recipient who receives a right lobe and a left lobe is different from that shown with a right-sided heterotopic graft.6 In the present case, a right liver lobe graft and a left liver lobe were implanted orthotopically, with positioning of each graft being anatomically natural. For grafts of 2 left lobes or 1 left lobe and left lateral lobe, the second liver graft must be rotated 180 degrees and hetero­topically positioned to the right upper quadrant after the first liver graft is orthotopically implanted at the original left position. Under such circumstances, regeneration of the heterotopic graft may cause stretching or kinking of the vasculature. Yang and colleagues7 observed a marked decrease of hepatic venous flow at postoperative day 7 in a right-sided heterotopic graft. Hepatic vein obstruction, which is rarely found in orthotopically positioned grafts, has been shown to occur in the heterotopic left lobe graft in 15% of total patients, as reported by Lee and colleagues.8 The recipient in our study had appropriate hepatic venous drainage, which is less likely to be the major reason for graft atrophy.

The left graft atrophy may be directly attributed to left hepatic arterial inflow failure. In rat models of heterotopic auxiliary liver transplant, graft rearterialization increased graft survival significantly by improving early hepatic function, enhancing the regenerative response.3 Liu and colleagues9 observed that the dramatic increase in hepatic arterial flow as a result of splenic radiofrequency ablation improved liver function and induced liver regeneration in cirrhotic patients. In the DGLT model reported here, left but not right hepatic arterial flow failure, as confirmed by Doppler sonography, impaired the early regeneration process of the left graft, whereas the right graft regenerated effectively. We suggest that adequate arterial flow after implantation improves the hepatic oxygen supply needed for an increased ATP synthesis, which will protect the graft from warm ischemic injury and promote hepatocyte proliferation. Meanwhile, equivalent portal blood supply was observed between the 2 grafts, implying portal inflow steal by the larger right graft was not involved. Hepatic arterial flow, instead of hepatic portal supply, may be a key element in the intergraft regeneration competition in this particular case. 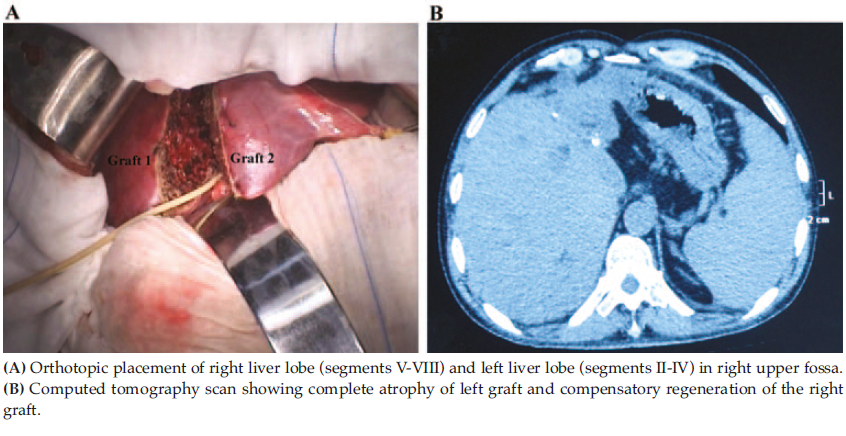