As of 2020, there were 2605 newly activated patients on the pancreas transplant (PTX) wait list in the United States and over 1000 PTX have been performed.1 Postoperative ileus is a frequent complication after abdominal surgeries, including PTX. During this period of impaired gastric motility, nasogastric tubes are often placed to decompress the bowel and dietary restrictions are enforced until the patient has return of normal bowel function.2 Concerns for malabsorption can affect postoperative medication management, namely, the administration of oral medications. Alternative routes of administration, including intravenous and sublingual, are typically used. Sublingual administration allows medications to be absorbed directly from the oral cavity and is less invasive than intravenous therapy. Sublingual administration of medications could be beneficial for PTX recipients with potential malabsorption issues.3

Beginning January 1, 2017, our institution’s tacrolimus protocol in simultaneous kidney-pancreas and solitary pancreas transplants was updated to reflect the preferential use of sublingual tacrolimus over the suspension formulation in the immediate postoperative period to optimize absorption. The objective of this study was to compare the clinical, pharmacokinetic, and perioperative outcomes between oral and sublingual tacrolimus administra­tion in PTX recipients.

Unmatched cohorts (oral vs sublingual groups) had significantly different characteristics. We performed propensity score matching to create similar cohorts for comparison. We used the greedy nearest neighbor without replacement approach. We completed a 1-to-2 match (sublingual to oral), with the maximum caliper set at 0.3. We matched on the following charac­teristics: age, race, sex, transplant type (simultaneous pancreas transplants vs solitary pancreas transplants or pancreas-after-kidney transplants), and rabbit antithymocyte globulin induction therapy. We used the standardized mean differences method to compare cohorts’ characteristics before and after the match. Mean or median values were used for continuous or ordinal variables, whereas percentages were used for categorical data. Standard univariate statistics were used to compare matched groups, including the chi-square test for nominal data, the t test for continuous data, or the Mann-Whitney U test for nonnormally distributed data. Kaplan-Meier survival curves were produced to compare time to acute rejection or censoring, with the log-rank test used to determine statistical significance. The threshold for statistical significance was set as a 2-sided value of P < .05. All analyses were performed with SPSS software (version 23.0, IBM).

A total of 54 PTX recipients were included in the analysis, with 17 patients who received sublingual tacrolimus matched to 37 patients who received standard oral tacrolimus. The propensity score matching was successful, as baseline characteristics were similar between groups (Table 1). The mean age at transplant for both groups was 42 years, and most patients received induction with antithymocyte globulin.

Table 2 displays the clinical pharmacokinetics of tacrolimus, as well as clinical outcomes. Within the sublingual group, it took a mean of 3.2 days to achieve a therapeutic tacrolimus trough level compared with a mean of 3.8 days in the oral tacrolimus group (P = .175). There was no difference in the incidence of supratherapeutic tacrolimus levels between groups. The proportion of tacrolimus trough levels within range (8-12 ng/dL) was slightly higher in the sublingual group (0.72 ± 0.16) compared with those in the oral group (0.69 ± 0.12); however, this did not reach significance. Of note, the conversion factor from sublingual to oral tacrolimus in this patient population was 0.67. Clinical outcomes included rates of hyperkalemia and rejection, which were also similar between groups.

Although the beneficial crossover design allowed patients to serve as their own comparators, the small sample size was a limitation.8 Doligalski and colleagues created a 10-question online survey to assess the current state of sublingual tacrolimus and distributed this survey to pharmacists at transplant centers that performed more than 100 transplants in 2013. The survey was completed by 59 of the 90 (65.5%) transplant centers. Sublingual administration was largely used in the lung transplant population (67.5%); however, it was used in all other organs as well. The most common dose conversion was 1:2 for sublingual versus oral. Overall, the authors conclu­ded that most centers surveyed felt that sublingual tacrolimus was an alternative option when oral administration is not feasible.9

This is the first report to evaluate the phar­macokinetic and clinical outcomes of the use of sublingual tacrolimus in PTX. Limitations of this study included a small sample size and retrospective design. Additionally, the initial regimen was provider specific. Time to therapeutic range may have been affected in patients who received a more conservative start dose.

Overall, this study demonstrated that the use of sublingual tacrolimus in PTX appears to be a safe and effective strategy to avoid oral or intravenous therapy in the perioperative period and may reduce the time needed to achieve therapeutic levels. No difference in rates of adverse effects of incidence of rejection was observed between groups. Larger prospective clinical trials are warranted to further investigate the effects of sublingual tacrolimus on clinical outcomes compared with oral formulations. 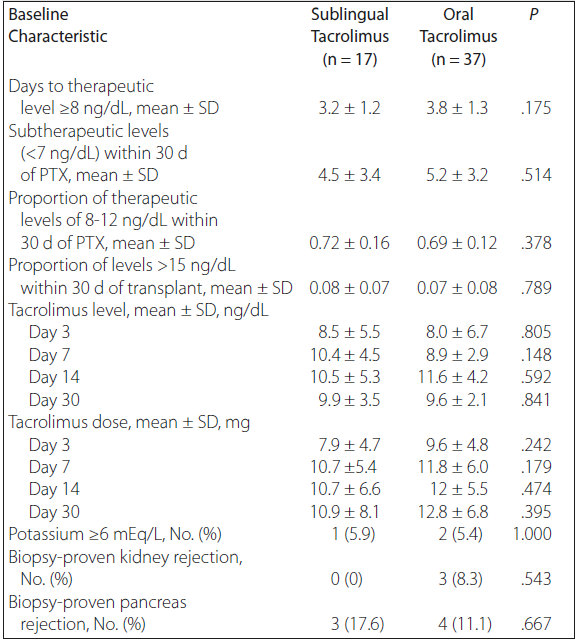