During the anhepatic phase of liver transplant, clamping of the inferior vena cava (IVC) is necessary to explant the native liver and implant the donor graft. The magnitude of IVC obstruction, along with the subsequent severity of interruption to venous return, is highly variable and dependent on surgical technique (Figure 1).

Complete IVC clamping is used in caval replacement (CR), whereas partial clamping is performed in the piggyback (PB) technique and has been proposed to preserve IVC flow. Inferior vena cava clamping impairs venous return and cardiac output, causes infrahepatic venous engorgement, increases the potential for end-organ dysfunction, and necessitates increased vasopressor support to preserve systemic perfusion pressure. Physiological renal function is at risk of compromise because of the dependence of renal perfusion on the glomerular pressure gradient.1

Compared with CR, the PB approach has been proposed to reduce the incidence of acute kidney injury (AKI) and organ dysfunction as a consequence of preservation of venous return.2 However, a review by Gurusamy and colleagues in 2011 identified no differences in renal failure, liver graft function, or mortality between these surgical approaches.3 In addition, studies that compared the incidence of AKI after these approaches have reported conflicting results.4-7 Subsequently, the use of venovenous bypass to decompress the infrahepatic venous circulation during caval clamping has lost popularity because of the limited evidence of benefit.8

The degree of obstruction to venous flow may be quantified by measurement of the pressure difference between the IVC and superior vena cava (SVC), which is the transcaval pressure difference (TCPD).9,10 At our institution, it has been standard practice to insert both internal jugular and femoral venous lines to derive the TCPD. We do not routinely use venovenous bypass or portocaval shunts. We have observed that when measuring the TCPD the degree of IVC occlusion during the anhepatic phase of transplant varies substantially between cases in which the PB technique is used. This previously unreported heterogeneity in flow restriction with the PB technique likely results from clamp position and native caval anatomy and, as such, is potentially subject to modification during the procedure.

It is feasible that clinically significant infrahepatic IVC hypertension has remained undetected in a substantial number of cases in which the PB approach was performed. Real-time TCPD quantification could assist in the perioperative management of the recipient, principally to optimize clamp position and minimize interruption to venous return. Here, we aimed to describe the variation in TCPD during the anhepatic phase of liver transplant and to assess its association with postoperative renal impairment.

Ethics
This project was recognized as a service evaluation by the Royal Free Hospital research and development unit, and on this basis the need for ethical review was waived.

Data source, participants, and definitions
Conduct of this retrospective cohort study followed the reporting guidelines of Strengthening the Reporting of Observational Studies in Epidemiology (STROBE). Patients were eligible for inclusion if they were over the age of 17 years and had undergone primary and sole liver transplant at the Royal Free Hospital, London, between June 2012 and December 2014. Records were excluded if (1) outcome, exposure, or covariate data items were missing, (2) transplant was super-urgently indicated, (3) preoperative serum creatinine concentration exceeded 100 μmol/L, or (4) renal replacement therapy was instituted before surgery.

We used the Kolmogorov-Smirnov test of nor­mality with Lilliefors significance correction to assess the data distributions and compared these with the t test and the Mann Whitney U test, as well as the Spearman rank correlation. Statistical significance was set at P < .05. Analyses were performed with Stata (version 15, StataCorp) or SPSS (version 20).

The TCPD was calculated by subtraction of paired SVC and IVC pressure measurements (TCPD = IVC pressure - SVC pressure). Maximum and mean TCPD values were calculated for multiple paired readings recorded during the surgical anhepatic phase. Primary outcome was TCPD during the anhepatic phase of liver transplant. Secondary outcome was the incidence of AKI at 72 hours after surgery, defined as either a score of at least 2 according to the Acute Kidney Injury Network (AKIN) classification (ie, serum creatinine ≥200% of preoperative baseline)11 or the requirement of postoperative renal replacement therapy.

A multiple logistic regression model was constructed to test the association of mean TCPD with our secondary outcome, with odds ratios. Covariates (including recipient, donor, and intraoperative factors) were identified from the data on the basis of clinical plausibility and prior evidence of association with kidney injury or venous pressure changes. Preoperative anemia was categorized per the World Health Organization definition, with hemoglobin concentration below 130 g/L for both female and male participants. All other covariates were entered as reported.

Transcaval pressure difference
After exclusions, the records of 115 patients were included in the analyses (Figure 2). Patient descriptors and surgical and donor characteristics are reported in Table 1. Caval replacement (CR) was performed in 60 patients (52%), and PB was performed in 55 patients (48%). There were no living donor transplants.

Association of transcaval pressure difference with acute kidney injury
Overall, 29 patients (25%) developed AKIN scores of 2 or higher on postoperative day 3. Surgical technique was not associated with our secondary outcome, but each increase of 1 mm Hg in mean anhepatic TCPD was independently associated with 6% higher risk for early AKI across the measured range (odds ratio, 1.06; 95% CI, 1.01-1.13; P = .04) (Table 2, Figure 4).

This study is the first to describe the heterogenous, and in some cases large, venous pressure gradients across the IVC with PB, despite the common notion that PB is the optimal surgical approach to preserve caval flow. Furthermore, we have shown for the first time that higher TCPD during the anhepatic phase of liver transplant is associated with higher risk of AKI at 72 hours after surgery. This association between TCPD and AKI is nearly linear and is independent of the surgical approach to transplant, whereas surgical technique was not associated with AKI. Also, we identified other risk factors for postoperative AKI that corroborate the findings of other studies.12-14

The surgical technique for liver transplant has been adapted to mitigate the adverse hemodynamic and physiological consequences of cross-clamping the IVC before explant of the native organ. Interruption of caval flow leads to a reduction in cardiac output and hypotension, as well as impaired perfusion and venous congestion of the abdominal organs, including the kidneys. Venovenous bypass was introduced to address this problem of interrupted caval flow, and initial results have shown a reduction in intraoperative blood transfusion and an improvement of posto­perative renal function.15 The PB technique has been further improved so that only partial IVC clamping is used, which facilitates venous return without the procedural risk associated with venovenous bypass.16 For this reason, the PB technique has grown in popularity and many centers have adopted the approach. Despite this popularity, definitive superiority of one technique over the other has not been established, and at our center the PB and CR techniques were used with similar frequencies of 48% and 52%, respectively, in our retrospective cohort.

The IVC pressure changes observed in this study during complete cross-clamping of the cava were similar to those previously documented.8 A key and novel finding in our study was the observation that the pressure difference between the infrahepatic and suprahepatic IVC with the PB technique varied substantially, and there was significant overlap of the TCPD values between the 2 surgical approaches (Figure 3). Our study demonstrated the linear relationship between higher TCPD during the anhepatic phase and risk of postoperative AKI, independent of the surgical approach (PB vs CR). We suggest that the hemodynamic influence of surgical technique is a key factor to determine AKI risk and that the PB approach is not intrinsically more protective than the CR approach. Furthermore, previous studies have failed to demonstrate superiority between the PB and CR techniques to reduce AKI, and the reason may be confounding factors such as the heterogeneity of pressure gradients caused by the surgical approach and the previously undescribed variability associated with the PB technique. It is a common assumption that the PB technique will maintain unobstructed caval flow unobstructed. We show in this study that this assumption is invalid and that the PB technique often has significant hemodynamic consequences with the risk of distal venous engorgement.

The pressure difference caused by the PB technique is highly dependent on the position of the sidebiting vascular forceps in relation to the IVC cross-sectional area (Figure 1). Our evidence indicates that the hemodynamic effect of caval manipulation for the PB technique may generate an increase in TCPD, and hence an increase in AKI risk, comparable with that of the full caval cross-clamp technique. Our findings suggest that clamp position may be a modifiable risk factor for the development of postoperative AKI. Knowledge of the real-time TCPD allows the opportunity for the anesthetist to inform the surgeon of the hemodynamic consequences of the side-biting clamp placement as it is applied to the IVC. A high TCPD indicates that reposition of the clamp may lead to potential hemodynamic benefits when it is surgically possible and safe to do so. Because of concerns regarding cost, time, and complications, few centers routinely measure IVC pressures and hence miss the opportunity to use real-time clamp position optimization to reduce potential postoperative AKI risk.

Strengths and weaknesses
Strengths of this study include comprehensive data and outcome collection that may not be available in large national databases. Limitations include the single-center and retrospective nature of the study.

Substantial caval pressure gradients may be encountered despite the choice of the PB surgical technique. This wide variation in the interruption of venous return during PB is frequently overlooked and may also account for the lack of consensus among studies of the associations between surgical approaches and renal outcomes. In our study, the increase in TCPD during the anhepatic phase of liver transplant was independently associated with higher risk of AKI. With the PB technique, the pressure difference, and therefore the subsequent risk of renal failure, may be modified during the procedure by repositioning the side-biting vascular IVC clamp. Measurement of the pressure difference allows anesthetists to communicate with surgeons regarding the real-time hemodynamic effects of caval clamping, which may potentially improve anhepatic hemodynamics and postoperative renal function. 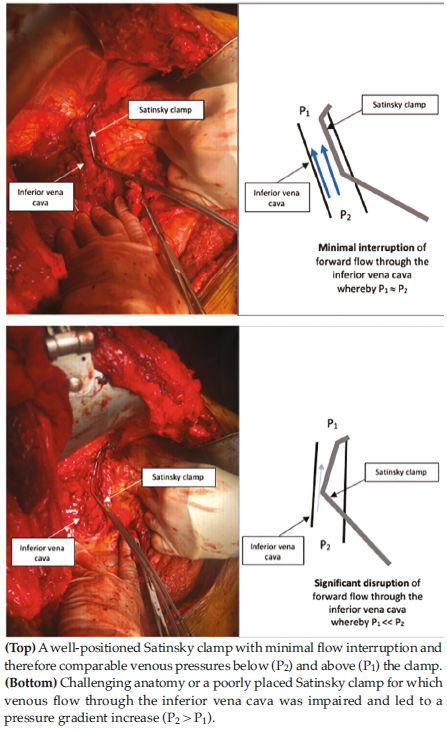 Figure 1. Intraoperative Images and Schematic Representations of Vascular Structures During the Anhepatic Phase 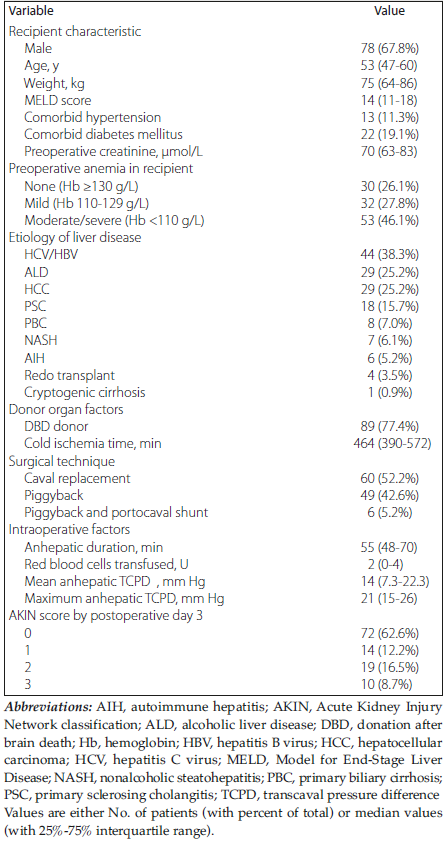 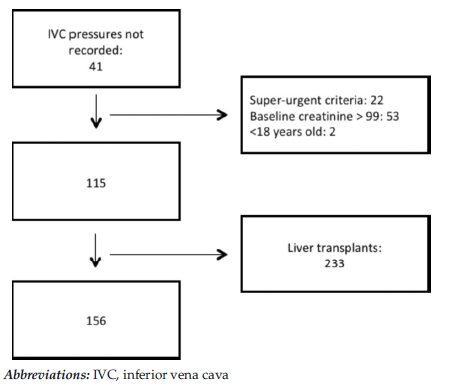 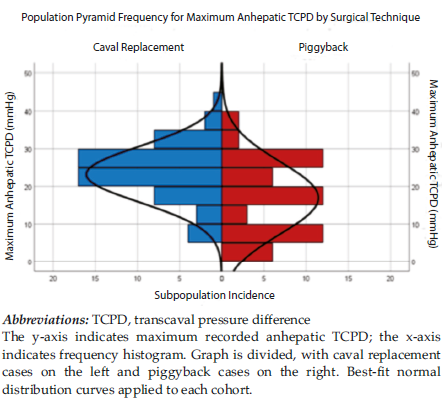 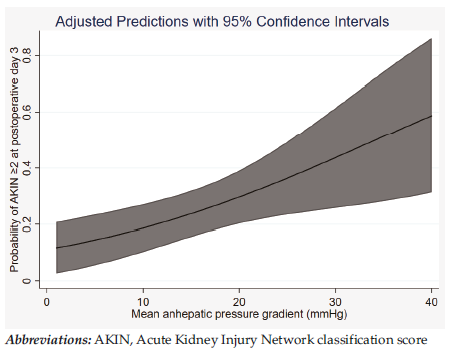 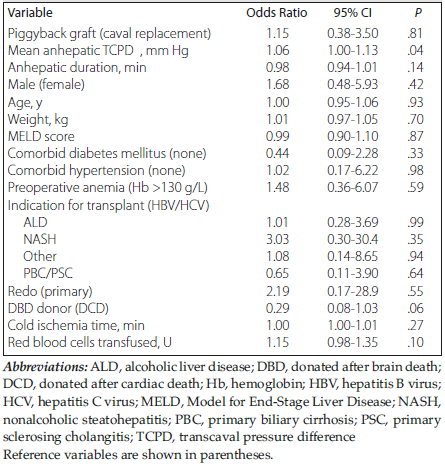