Objectives: The Achilles tendon, which is composed of tendinous parts of gastrocnemius and soleus muscles, is the strongest and the largest tendon in the human body. Chronic renal disease can lead to reduced physical activity and exercise capacity. Spontaneous rupture of the Achilles tendon can occur in patients with chronic renal failure, with recurrent micro­traumas, hypoxia, and chronic acidosis as predisposing factors. Here, we assessed and compared the elastographic findings in the Achilles tendon using acoustic radiation force impulse elastography in patients on chronic hemodialysis, in renal transplant patients, and in healthy volunteers.

The Achilles tendon, which is composed of the tendinous parts of the gastrocnemius and soleus muscles, is the strongest, largest, and thickest tendon in the human body.1 Achilles tendon injury is frequent both in athletes and in the general population due to sports-related trauma and overuse.2 A spontaneous Achilles tendon rupture, which is a rare complication, has been reported in patients with end-stage renal failure. Most of these patients have additional factors, such as hyperparathyroidism, diabetes mellitus, and use of fluoroquinolone antibiotics or corticosteroids.3 Some authors argue that uremic toxins cause tendon degeneration and spontaneous rupture.4,5 Metabolic acidosis, hypoxia, and hyperparathyroidism secon­dary to chronic renal failure may also lead to tendon degeneration.6 To prevent Achilles tendon rupture and chronification of tendon injury, early diagnosis and effective treatment of tendinopathy are im­portant. Magnetic resonance imaging with excellent soft tissue contrast can be used to evaluate the Achilles tendon, but this method is expensive and time consuming. Conventional ultrasonography, which is not expensive or invasive, can be easily performed as an alternative imaging modality to evaluate tendon disorders. It has a high diagnostic accuracy for tendon ruptures, but its value in tendinopathy is still controversial.2,7,8

Ophir and associates9 first described sonoelas­tography, which is based on the deformation response of the tissue with compression and release by the transducer. Sonoelastography enables a prediction of tissue elasticity by measuring the tissue deformation parallel to the direction of the external force. Each tissue or lesion behaves differently due to its molecular structure. Hard tissues or lesions become less deformed, whereas soft tissues or lesions become more deformed. Qualitative information, presented as color maps, or semi-quantitative information, presented as size ratios or elasticity ratios, can be obtained.

Most studies regarding elastographic findings in the Achilles tendon have used the sonoelastography technique.1,6,10-12 Acoustic radiation force impulse (ARFI) elastography, another newly developed elastography method, uses sound waves to quantify tissue elasticity, thus allowing tissues or focal lesions to be evaluated without external compression. This technique measures the shear wave velocity (SWV) of the target region inside the region of interest (ROI) without external compression and can estimate minor differences inside the ROI. The target tissue is mechanically stimulated by short-duration acoustic pulses to produce small (1-10 mm) localized tissue displacements. The tissue displacement results in shear wave dissemination, which is tracked with a probe, and is measured as the SWV (in m/s).13 Acoustic radiation force impulse elastography technology also includes virtual touch tissue quantification, a new technique for the quantification of tissue elasticity by calculating the SWV.14,15 Fu and associates2 assessed the elastic properties of normal Achilles tendons with virtual touch tissue quan­tification and evaluated whether these properties changed with age and sex. Ruan and colleagues16 used ARFI to evaluate elasticity of healthy Achilles tendons and found that SWV increases with age.

Study population
Our study included analysis of 150 Achilles tendons (50 Achilles tendons from 25 patients on chronic hemodialysis, 50 Achilles tendons from 25 renal transplant recipients, and 50 Achilles tendons of 25 healthy volunteers [control group]). All participants were asymptomatic, and none had a history of tendon injury. Patients in the hemodialysis group were on hemodialysis 3 times per week for at least 5 years regularly, and none had secondary hyperpara­thyroidism. Renal transplant recipients had history of at least 5 years of hemodialysis and were at a minimum of 5 years posttransplant. Their serum creatinine levels (0.8-1.2 mg/dL) were within normal levels. None of the healthy volunteers had a history of systemic disease, surgery, or chronic drug use that could be associated with tendinopathy. This study was performed in accordance with the ethical guidelines of the declaration of Helsinki and was approved by the local ethical committee. Informed, written consent was obtained from all participants.

The thickness of the tendon was determined by measuring the anteroposterior diameter from the middle third portion (2 to 6 cm above the insertion of the calcaneus) of the tendon. The ARFI elas­tography was performed by switching to the elastographic mode. Tendons were examined in the longitudinal plane, and the probe was held perpendicular to the tendon to avoid anisotropy.18 During elastography, the probe was placed in contact with the skin without pressure; because of the superficial localization of the Achilles tendon, more medical ultrasonic coupling gel was used. A fixed size of 5 × 6-mm ROI was placed in the middle third portion of Achilles tendon; after image stabilization, the probe was held steady for 3 to 5 seconds for framing. The image was then recorded and saved to the hard drive, and SWV values were calculated in meters per second and viewed on the screen.2,16 Four measurements were made for each tendon, and the mean value was calculated and used for statistical analyses. The SWV ranged from 0 to 9 m/s (Figures 1 to 3).

Acoustic radiation force impulse elastography has been widely used to assess both nodular lesions, such as breast masses, and thyroid nodules and diffuse diseases such as liver fibrosis and autoimmune thyroiditis.19-21 This technique has also been used to evaluate tendons, especially the Achilles tendon, which is the largest and thickest tendon in the human body. To the best of our knowledge, this is the first study that evaluated the elastic properties of the Achilles tendon in patients on chronic hemodialysis and in renal transplant recipients. The major findings of our study were that Achilles tendons in patients with chronic renal failure and in renal transplant recipients were softer than those in the control group (P < .0001). The stiffness of the Achilles tendons in renal transplant recipients was higher than in patients on chronic hemodialysis (P = .003) but still softer than in the control group (P < .0001).

Chronic renal failure is a notable health problem that can cause serious complications. Physical inactivity and decreased exercise capacity are both related to chronic renal failure, and these can increase morbidity and mortality. Hypoxia, metabolic acidosis, vascular changes, and calcification may cause degeneration of the Achilles tendon.6,24 Spontaneous Achilles tendon rupture is a rare but an important complication.3,4 Although the mechanisms of Achilles tendon rupture in patients with chronic renal failure is not well known, use of corticosteroids, hyperparathyroidism, use of fluoroquinolone anti­biotics, and amyloidosis have been reported as predisposing factors in the literature.3 Some authors have stated that uremic toxins can cause tendon degeneration and spontaneous rupture.4,5 In addition, a relation between length of time on hemodialysis and tendon rupture has been reported.25,26

Teber and associates6 studied 53 patients on chronic hemodialysis and 25 healthy control indi­viduals with ultrasonography and sonoelastography and found softening and thinning of quadriceps tendons in the patient group, although no quadriceps tendon ruptures were observed. The group used sonoelastography, which is an operator-dependent method, and evaluated the quadriceps tendons with color mapping. In our study, we evaluated Achilles tendon with ARFI elastography, which is an operator-independent and quantitative elastography method. In our study, we found softening and thinning of Achilles tendon in both the hemodialysis group and the renal transplant group, as similarly reported in the previous study. We also did not find Achilles tendon rupture, which could be explained by regular hemodialysis and close follow-up of patients regarding hyperparathyroidism and acidosis. In our study, elastographic findings in renal transplant patients were different from the previous study. The Achilles tendons of renal transplant patients were harder than shown in patients with chronic renal failure but still softer than shown in the control group. This could be explained by the increased mobility and exercise capacity of patients after renal transplant. In addition, excretion of uremic toxins from the body by urine could be another reason.

Our study has several limitations. First, our sample size was small. Second, we did not perform a histological analysis. Because all of our patients were asymptomatic, an invasive procedure like a biopsy could not be performed. Third, only the middle part of the Achilles tendon was evaluated. However, most abnormalities have been reported in the middle third of the tendon.2,19 The middle third portion of the tendon has poor vascular supply.27

In conclusion, we found thinning and softening of the Achilles tendon in patients who were on chronic hemodialysis. Chronic tendinopathy causes softening and weakening of the tendon. In the renal transplant group, stiffness of the Achilles tendon was increased versus the hemodialysis group but still softer than the control group, which could be explained as a positive clinical effect of renal transplant. An ARFI elastography is an inexpensive, objective, noninvasive, and easy method that can be used in the assessment of Achilles tendinopathy. 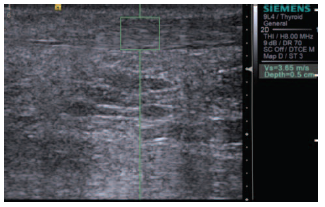