Serial monitoring of IgG and IgM anti ABO titers were continued for next 2 weeks. These titers were monitored once every 2 weeks for the next 3 months. Anti-ABO antibody (IgG) antibody titers against donor ABO blood group antigen were measured in the transplant recipients with column agglutination technology (also known as the gel method) on an Ortho Vision analyzer platform.

Whenever there was a clinical suspicion of acute rejection or if an indication biopsy showed evidence of AMR, then DSA and anti-ABO titers were performed. Renal biopsies were stained with hematoxylin and eosin, periodic acid-Schiff with silver methenamine, and Masson trichrome stains and slides were reviewed for glomerular, tubular, interstitial, and vascular changes. The graft biopsies were analyzed and scored according to the Banff 2017 update.5 The C4d-stained (immunohistochemistry) slides were also reviewed and scored according to the Banff guidelines.5 Follow-up details were available for all the patients enrolled. The study was approved by the institutional ethics committee of our hospital, and a waiver of consent was obtained from same committee. All the procedures were in accordance with the Declaration of Helsinki 2000 and the Declaration of Istanbul 2008.

A total of 183 patients underwent ABOi renal transplant from January 2012 to June 2019 after a desensitization protocol (Figure 1). We included 164 patients in the study after we excluded 19 patients who had preformed class II DSA (mean MFI, 3832 U). Positive DSA is indicated by MFI greater than 2000 U with Luminex DSA crossmatch (Lifecodes, DSA kit, Immucor).

The range of baseline anti-AB antibody titers ranged from 1:4 to 1:512 for IgM and from 1:2 to 1:512 for IgG. Recipients received rituximab (375 mg/m2) at 15 days before the prospective date (day -15). Tacrolimus (0.05 mg/kg) and mycophenolate mofetil (1 g/d) were started at day -14. At day -2, the dose of tacrolimus was increased to 0.1 mg/kg and mycophenolate mofetil to 2 g/d. Antithymocyte globulin (1 mg/kg) was given from day 0 to day 2. Injection of methylprednisolone (500 mg/d) was given from day 0 to day 2. After a desensitization protocol, the anti-AB IgG titers were 1:8 or less in all the patients. The mean age of the patients who underwent ABOi renal transplant was 41 ± 13.06 years. Most of the donors were female (84%), and most were spouses. Other donors included mother, father, brother, sister, husband, and first cousin. There were no unrelated donors. There were 65 indication renal graft biopsies performed in 54 patients with graft dysfunction. The indications for biopsy included graft dysfunction and/or new-onset proteinuria/hematuria. These results are shown in Table 1.

Biopsy-proven acute rejection
Acute AMR was diagnosed in 21 of 164 patients (12.8%). Three patients (1.8%) also had accompanying acute cellular rejection (ACR). All patients with graft dysfunction due to AMR were within 1 year of transplant. Sixteen of the 21 patients (76%) had an episode of AMR within 3 weeks of transplant. Details of these patients included IgG anti-ABO titer at baseline, after desensitization, and at biopsy, as well as DSA and HLA antigen mismatch status (Table 2). All of these patients had IgG anti-ABO antibody titer of below 1:8 after desensitization protocol before transplant, and their HLA antigen class I and class II DSA status was negative.

Fifteen patients showed an increase in anti-ABO antibody titer (1:8 or higher) at the time of biopsy-proven AMR, and 8 of these patients showed rebound titers of 1:32 or more. Only 2 of 21 patients had de novo DSA (both class II). These 2 patients had developed DSA against class II HLA antigen with MFI values of 3369 and 5432, respectively.

Of the group of 21 patients diagnosed with acute AMR, 4 had evidence of thrombotic microangiopathy and 3 had features of acute cortical necrosis. Most of the patients (16/21) had evidence of glomerulitis (severity was graded as the g score). All patients (21/21) had evidence of peritubular capillaritis (severity was graded as the ptc score), and most had moderate to marked capillaritis (ie, for 5 patients, the ptc score was 1; for 15 patients, ptc was 2; and for 1 patient, ptc was 3). The microvascular inflammation (MVI) score (ie, the sum of the g score with the ptc score [g + ptc]) was 2 or higher in patients, with a minimum score of 2 and maximum of 5. Acute tubular injury was present in all patients, whereas intimal arteritis was seen in only 1 patient. Intimal arteritis was seen as transmural inflammation and fibrinoid necrosis (score V3). Interstitial hemorrhage was observed in 3 patients.

All patients with acute AMR had C4d positivity. Of these patients, 76% had diffuse intense C4d positivity in the peritubular capillary basement membrane (c4d score of 3), whereas the remaining 24% patients had c4d score of 2 (Table 2). Patients diagnosed with AMR were treated with plasmapheresis and intravenous immunoglobulin (100 mg/kg after each plasmapheresis). Immunoadsorption columns (Glycosorb) and intravenous immunoglobulin were used in all of the high-titer (at least 1:124) posttransplant anti-ABO tests.

There were 3 cases (1.8%) of ACR with moderate tubulitis (grade t2) and marked interstitial inflam­mation (grade i3) and 8 cases (4.8%) of borderline ACR. Acute cellular rejection was treated with 3 doses of methyl prednisolone (500 mg for 3 days) and optimization of the dose of calcineurin inhibitors to desired trough levels (7-10 pg/L tacrolimus).

Acute tubular injury
Acute tubular injury without morphological features of rejection (MVI score 0, absence of tubulitis or intimal arteritis) was seen in 17 biopsies (10.3%). All of these patients had cumulative (IgG/IgM) anti-ABO antibody titers of 1:4 or less before transplant, and their HLA antigen DSA tests were negative. At the time of biopsy, the anti-ABO antibody titer was 1:4 or less and DSA was negative. Of these 17 biopsies, 11 showed C4d positivity (65%). The C4d positivity was diffuse-intense (c4d score 3) in 3 cases, moderate in 6 (c4d score 2), and mild in in 2 patients (c4d score 1). Patients were given supportive treatment with hydration. Of 17 patients, only 1 patient developed CAMR at 24 months after initial biopsy and 1 patient died from gram-negative bacterial sepsis.

Other histological findings
There were 7 cases of acute calcineurin inhibitor toxicity, of which 2 cases showed features of thrombotic microangiopathy, and 1 case of BK virus nephropathy. There was 1 case with nonspecific interstitial fibrosis and tubular atrophy with focal acute tubular injury without any features of rejection.

C4d positivity
Overall, C4d was positive in 74% of the renal graft biopsies (48/65). The distribution of C4d positivity is shown in Table 3. All 21 cases with acute AMR and 4 of 6 (67%) cases of CAMR showed C4d positivity. In the remaining 2 cases of CAMR, electron microscopy was confirmatory and showed peritubular capillary multilamellation with 7 or more layers and features of transplant glomerulopathy.
C4d was positive in 60% of patient biopsies without evidence of AMR or CAMR (23/38). Most of these patients had moderate to low C4d score (c4d score 2, 15 patients; and c4d score 1, 4 patients). Only 4 patients had intense diffuse peritubular capillary wall C4d positivity (c4d score 3). Only 3 of these 38 patients developed AMR later in the course of follow-up (1 patient with AMR and 2 with CAMR). Two patients experienced an episode of ACR, whereas 1 patient experienced an episode of borderline ACR in subsequent biopsies.

ABO-incompatible renal transplant has provided expansion of the donor pool and has reduced the wait time for patients with ESRD who seek living donor renal transplants. Kidney transplant across the blood group barriers (ABO) has been a formidable task. However, because of “accommodation,” which is the concept of inhibition of the antigen-antibody reaction between the antigenic sites on the endothelial cells and circulating isoantibodies, this type of organ transplant has become possible.6

Haberal and colleagues, nearly 3 decades ago, reported that renal allografts preconfirmed with accommodation demonstrated by skin grafts showed stable function despite the presence of complements and anti-ABO antibodies on the renal allograft endothelium.7,8 Studies have shown that death-censored graft survival rates in ABOi renal transplants are similar to compatible transplants. B-cell-depleting agents along with apheresis and triple drug immunosuppression have played a major role in the success of ABOi renal transplant.9 In a country such as India where deceased donor transplants are few, ABOi transplant provides an important option for renal replacement therapy in patients with ESRD.10


In the past, only small series of ABOi kidney transplants have been described from India.10,11 Several studies have described biopsy data in ABOi transplant recipients. A study from Japan described ACR in 21% and acute AMR in 3% of the patients with ABOi renal transplant. In this study, the authors did not find any case of graft loss due to AMR with extreme elevation in anti-ABO titers.12 Another study from Germany found that 27.4% of patients experienced at least 1 episode of ACR and 4.8% patients had at least 1 episode of acute AMR within 1 year of ABOi transplant.13 Dorje and colleagues described biopsy-proven acute rejection episodes in 5 of 20 ABOi transplant cases, 2 of which showed combined AMR and ACR, 1 showed ACR only, and 1 showed borderline ACR. Both cases of combined AMR with ACR occurred during the first 15 days after transplant.14 Another study from Spain described AMR in 13.3% and ACR in 6.7% of the indication biopsies of ABOi transplant patients performed during the first year after transplant. They also observed a higher incidence of borderline rejection episodes in the ABOi group compared with ABO-compatible patients in protocol biopsies performed at 1 year posttransplant.15

In our study, we found AMR in 12.8% cases and ACR in only 1.8% cases. Most of our patients experienced an episode of AMR within the first 21 days after transplant. Elevations in anti-ABO antibody titer in these patients ranged from 1:8 to maximum of 1:1024. Two patients also had positive DSA (class II) at biopsy. In an earlier study from Japan, the authors reported that most cases of AMR in ABOi transplant due to anti-ABO antibodies occur between 1 and 3 weeks after transplant. In these patients, despite the rebound in anti-ABO antibody titers after 3 weeks, there were no episodes of AMR, which can be attributed to development of accommodation.16 Glomerulitis was observed in 76% of our patients and peritubular capillaritis in 100% of our patients. Ushigome and colleagues described severe glomerulitis (g score of 2-3) in their series of AMR in ABOi patients with a higher percentage of cases with this feature compared with ABO-compatible transplants.17 We observed that morphological evidence of MVI (g+ptc score ≥2) was helpful to diagnose AMR. The diagnosis was further substantiated if there was evidence of rebound anti-ABO antibody or positive DSA. Although we observed diffuse intense C4d positivity (c4d score 3) in most of our cases of AMR, we could not attribute substantial importance to the diffuse intense C4d positivity because this was also observed in non-AMR cases. An earlier study by Ishihara and colleagues has also suggested that an MVI score (g+ptc) of 2 or more may be used to diagnose AMR in ABOi renal transplant recipients. They also found that an MVI score of 2 or more is associated with poor graft outcomes in patients with ABOi renal transplant.18 Acute tubular injury alone as a morphological feature with C4d positivity will be insufficient to indicate AMR in absence of MVI.

Limitations
Our study is limited by a small sample size and includes only indication biopsies because our center does not perform protocol biopsies. We suggest that further studies on larger subset(s) of patients may establish and confirm the findings of this study.

Conclusions
Renal transplant for ABOi patients has proved to be a successful strategy to expand the living donor pool for patients awaiting renal transplant. Improved desensitization protocols have improved outcomes, and we observed both 1-year and 3-year death-censored graft survival rates of more than 90%. We observed that most AMR cases occur within the first 3 weeks of transplant. The MVI score (g+ptc score ≥2) provided reliable evidence to diagnose AMR in the early posttransplant period. An increase in anti-ABO antibody titer or anti-HLA antigen DSA will further confirm the diagnosis of AMR. Diffuse C4d positivity is not reliable, as it may be observed in non-AMR patients as well. Patients with episodes of AMR have reduced patient and graft survival at 1 year. Acute tubular injury with C4d positivity does not always indicate AMR, and these patients may experience infrequent periods of AMR later in life. Banff classification should be updated to include diagnostic criteria for AMR in ABOi transplants. 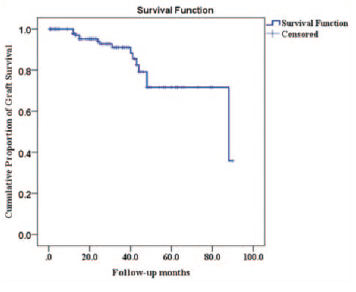 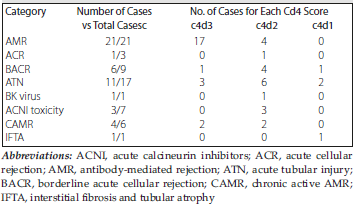 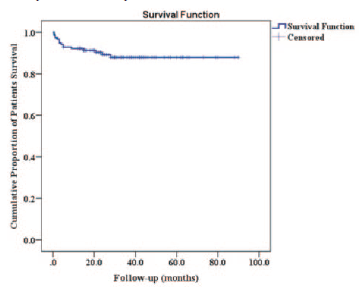